This year especially Game of Thrones’ Stark family would hate the Canary Islands. Instead of moodily mumbling their famous catchphrase, they might actually raise a smile as they looked skyward and uttered: “Winter isn’t coming.”

This winter season (2015/2016) has been unusually warm in the Canary Islands. The hottest January day on record was registered on Tenerife (nearly 30C) with El Hierro following closely behind. It’s been a hot, dry one which pleases the visitors but has the farmers hoping the rains will come at some point before spring arrives. 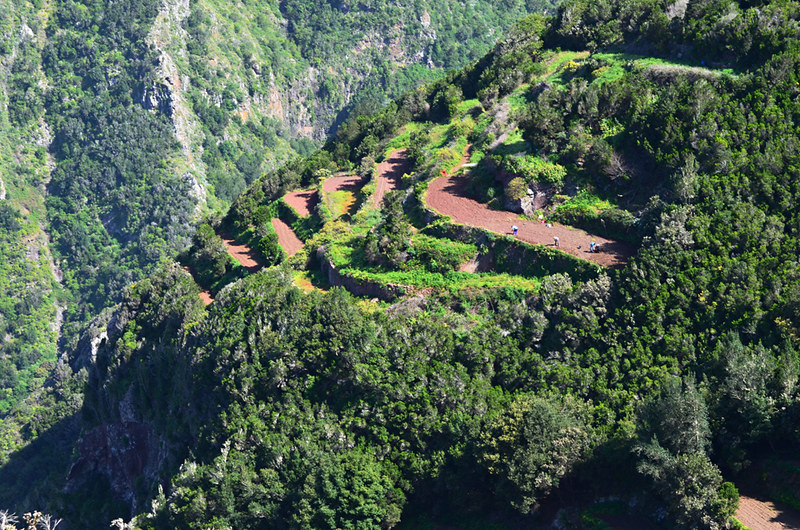 The sunbathing brigade are in their element but then so are those savvy walkers who already know the Canary Islands is one of the best walking destinations in Europe. Four hours or so and you can swap icy streets for ones which are kissed by a golden globe with a warm breath.

But there are plenty of other reasons why the Canary Islands are a dream all round winter walking destination.

The Climate in the Canary Islands 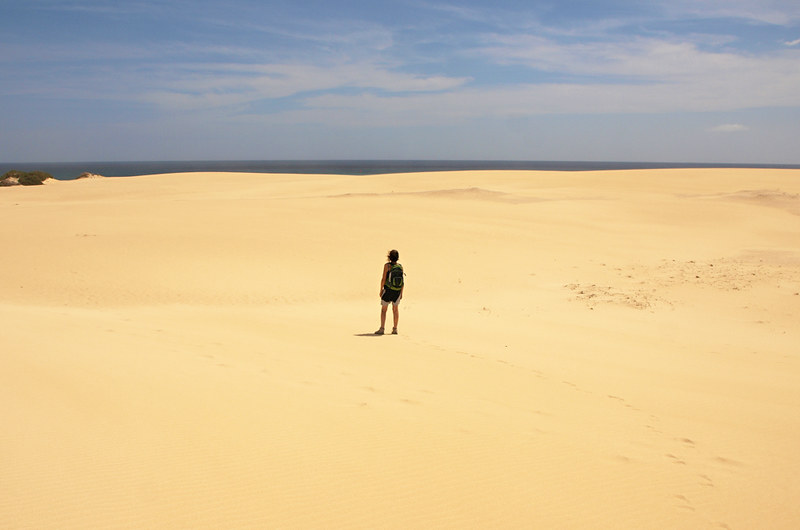 I’ve already mentioned the good weather all year. It’s the numero uno reason for the popularity of the islands. However, temperatures don’t stay more or less the same as some guidebooks would have you believe. There are differences. Summer is hot, winter is warm (generally speaking) which is why winter walking is especially good. You don’t want 30C when hiking in the hills. But 23C is a joy. The differences are mainly between being in the shade and being in the sunshine. Walking in Teide National Park illustrates what I mean. There can be snow on the ground (it can happen in winter months at altitudes ranging from 2000m to the highest point in Spain – 3718m). In the shade of a hillside at altitude we need fleeces. But walk into the sunshine and within moments we’re down to tee-shirts. 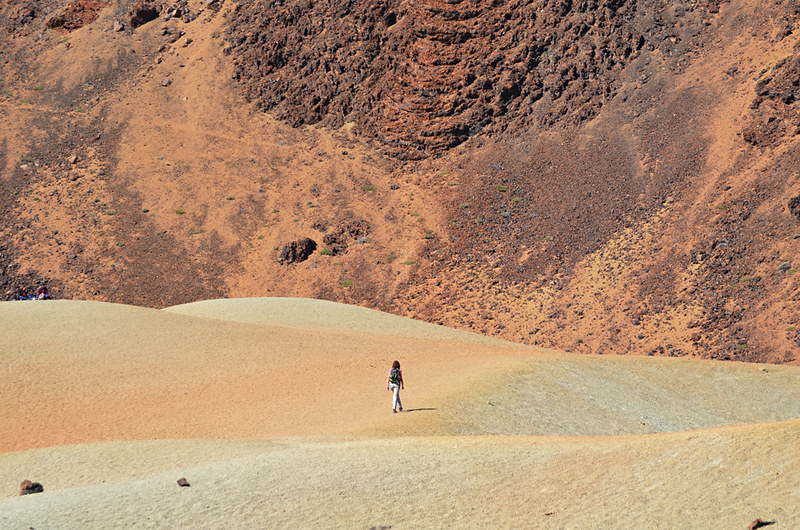 It’s not just sun, sand and arid volcanic scenery. There are Sahara-like stretches, pine forests, palm groves, ancient laurisilva forests, deep mysterious crevices, agricultural valleys with neat terraces, coastal walks through banana plantations and any number of punch you in the gut scenes of volcanic landscapes. A snapshot of many worlds in seven islands. Generally speaking, the eastern islands of Lanzarote and Fuerteventura are best for stark yet eye-catching volcanic terrain and golden beaches whilst the western isles of La Palma, La Gomera and El Hierro are lush and lovely. Tenerife and Gran Canaria both do a good job of offering the most diversity with tasters of most islands. 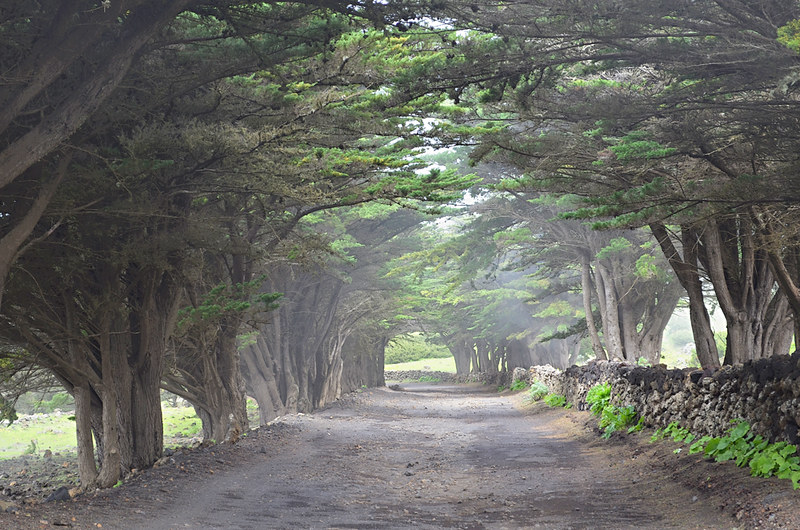 As most of the best paths exist because they were trading links between villages and from high in the hills to the coast, you can walk just about anywhere without the fear of facing beetroot faced farmers chasing you from their precious lands. 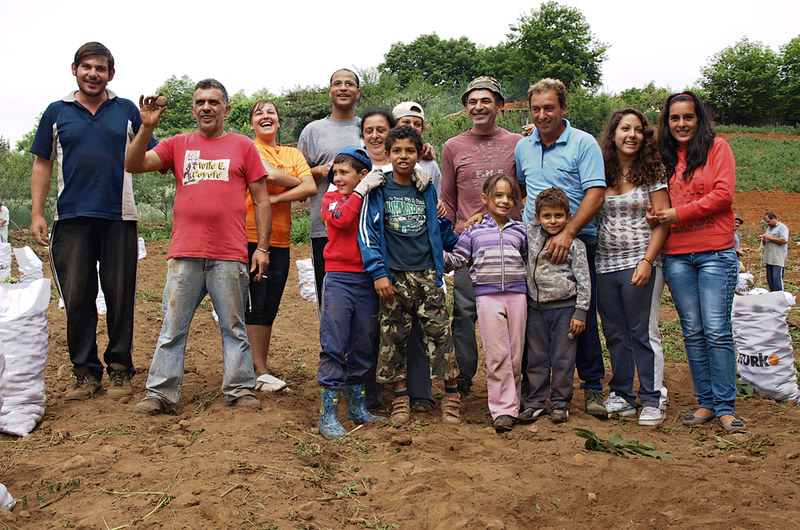 Canarios are a friendly lot. As friendly as we’ve experienced anywhere. People may look at you with curiosity in the most remote areas but will greet you with a happy ‘hola’ or ‘buenos días’. Attempting a few words of Spanish definitely opens doors. A few days ago a couple of words with a farmer peeling potatoes led to us being shown around cave houses in the Anaga area of Tenerife. In our experience, the more traditional the area, the friendlier the local people. 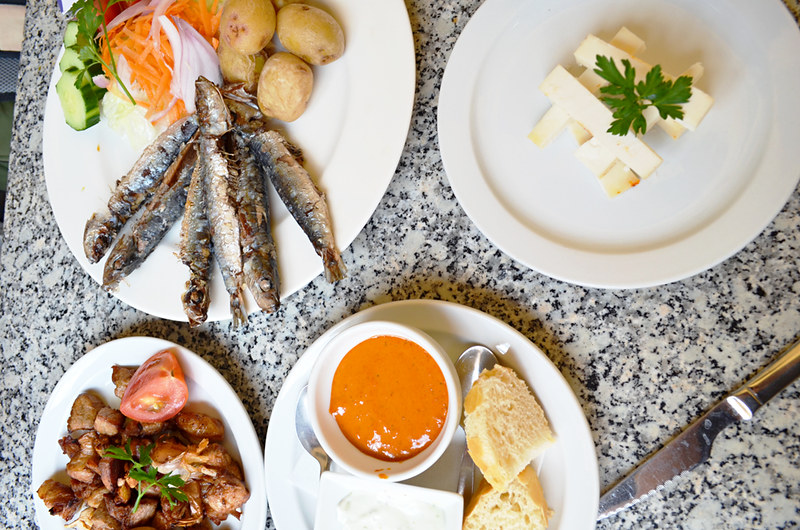 The food is good in the Canary Islands. At a traditional level it’s simple (grilled meat and fish dishes) yet also varied with goat and rabbit good choices for meat-loving foodies wanting to try something a bit different and the likes of parrot and scorpion fish for adventurous fish fans. As a rule gastronomy in the islands with the greater local population is better than the islands where there the Canarian population is low. So Fuerteventura and Lanzarote are the weakest when it comes to choice away from the resort areas whereas Gran Canaria and Tenerife especially, where there’s a strong culture of eating out, have some fantastic and interesting restaurants in  rural areas (e.g. in old haciendas, contemporary restaurants updating traditional dishes). On La Palma, La Gomera and El Hierro there’s no problem finding anywhere to eat. Thanks to a ferry delay we turned up at a rural town on El Hierro at 11pm and had no worries about tucking into a very late dinner. The choice on the latter three is mainly traditional Canarian fare. During the day on all islands there are always tascas and local bars serving tapas to be found somewhere close to most walking routes.

Get Away From it All 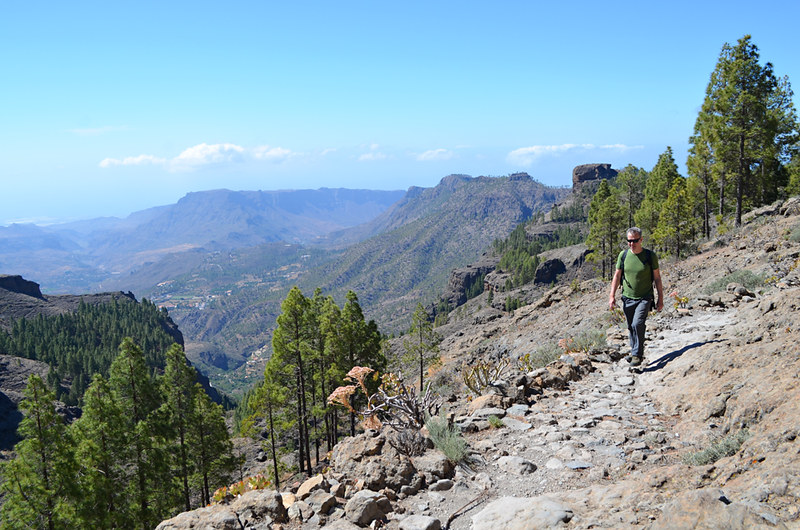 La Gomera is deservedly best known as one of the great island walking destinations. It is still the best in our view for stepping from a rural hotel and onto a trail. But, having walked across all of the Canary Islands, we’ve found they are all exceptional for walking and the islands which are better known as mass tourism destinations are in a way best for really getting away from it all whilst on the trail. In winter months some of the most popular La Gomera routes can be relatively busy with walkers whereas there are many parts of Tenerife, Gran Canaria and Fuerteventura where you rarely meet another person whilst walking. That makes the walking feel exclusive and special. El Hierro is still the relative unknown of the bunch and therefore anywhere feels ‘away from it all’. 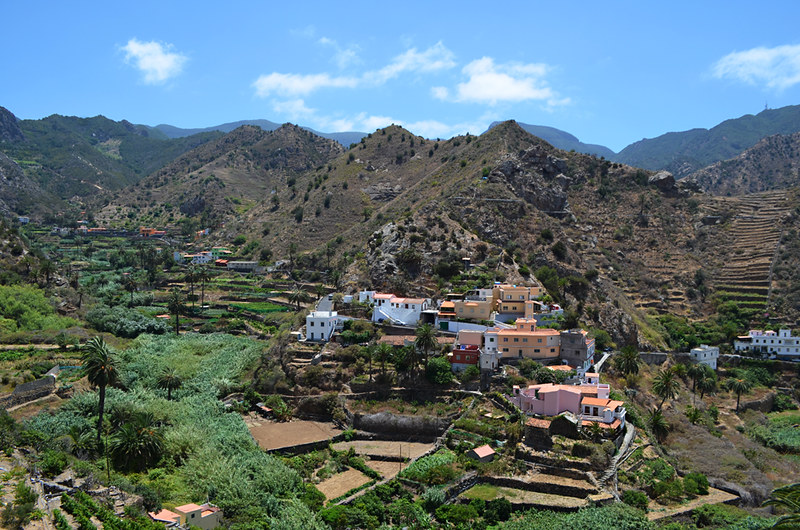 Walking in the Canary Islands doesn’t feel as though you’re walking in Spain. At some times it can feel North African, especially Fuerteventura, at others more South America. In places the vibe is distinctly Caribbean. Lying off the coast of Africa and being at the crossroads with the New World after Columbus discovered the Americas has created a unique culture – it’s called Canarian.

A Sense of History 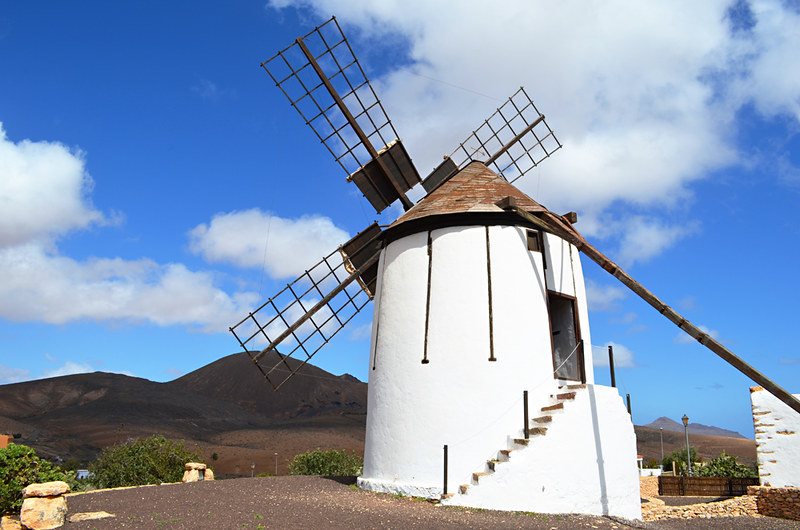 Whether walking a trail which was used by the original inhabitants of the island (they had different names on various islands) to move their livestock from coast to hills, or one of the rocky merchants’  highways (camino real) there’s a sense of connection with islanders throughout the centuries when you walk these paths. These aren’t simply trails that existed for leisure, many were a lifeline between communities. It’s fascinating to visit Cape Verde and see similar paths still being used as trading routes.
As well as sensational scenery, there are signs all along some routes in the Canary Islands which open a portal to a previous age. In fact in some areas life continues much as it has done for hundreds of years. 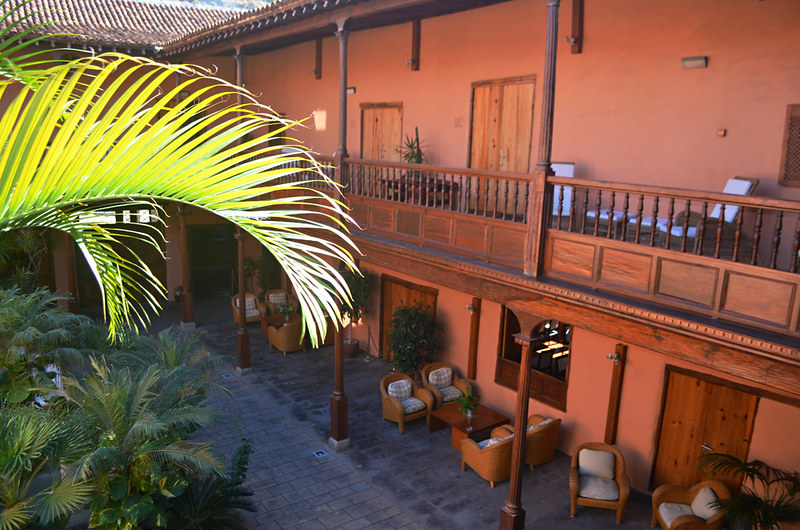 Linked to above are the historic rural hotels to be found on each of the islands. Like gastronomy, the more populated the island the better choice of rural accommodation there is. The most fertile lands were given to the richest of the post conquest settlers, subsequently Gran Canaria and Tenerife have the pick of wonderfully atmospheric small, family run hotels in colonial mansions located in the most scenic locations. La Gomera also has more than its fair share of relaxing and picturesque places to unlace the boots after a long walk. 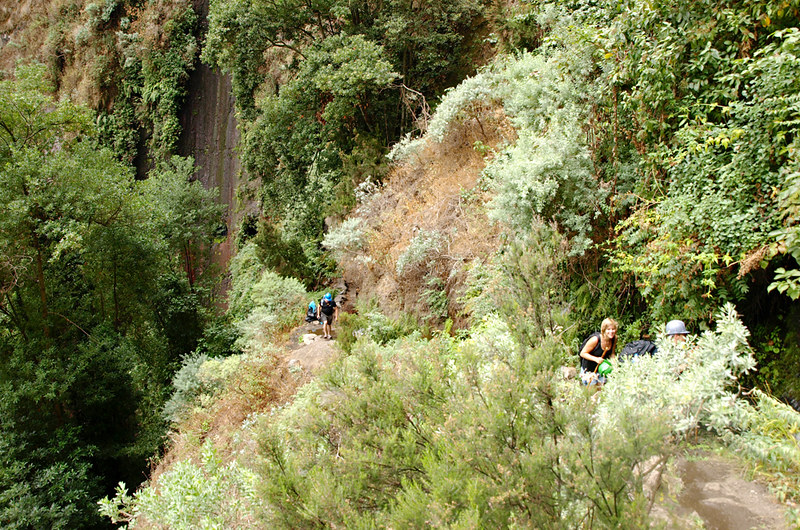 There’s a good mix of relatively easy and more demanding walking routes in the Canary Islands. Anyone wanting surreal volcanic scenery without thigh crunching ascents/descents will probably be better heading for Lanzarote and Fuerteventura. From Gran Canaria westwards, the peaks become steeper and the ravines deeper. The best walking can also be quite demanding; as testing as anywhere we’ve walked in Europe. La Gomera might be small but getting around involves climbing and descending steep paths. The western islands aren’t really for anyone who doesn’t have a head for heights, although they all offer routes which shouldn’t be beyond anyone with mild vertigo. It’s just that the most rewarding trails generally involve paths above or running alongside steep drops. The ultimate walk being the ascent of Mount Teide on Tenerife. It might be Spain’s highest mountain, but ironically it’s not particularly a vertiginous route.

In the end it is the combination of all of the factors above which make walking on any of the Canary Islands so special. They are islands known to people in most of Europe and yet there are so many places within each island that remain secret to all but those who pull on a pair of boots and take to the hills.

Plus the weather is fantastic.

We are authors of the guidebook Walk this Tenerife and work closely with slow travel specialists Inntravel to put together walking routes for all the Canary Islands.

The Best Places for Walking on Tenerife

Think of walking in the Canary Islands and most people will automatically name La Gomera as the number one destination and Tenerife would be lucky if it got onto the list at all. Yet, move inland and away from the purpose built resorts of Tenerife and you’ll find an island whose variety of landscapes and terrain far outweigh that of its quiet neighbour. […]