When it comes to gastronomy and Greece views tend to range from it being one of the world’s classic cuisines to Grecian fare being underwhelming.

We fall somewhere in the middle. Some dishes we crave. In fact, feta cheese and Greek yoghurt figure on our shopping list each week and we make a variety of Greek dishes on a regular basis. We were introduced to calamari on Corfu, grilled sardines in Lesbos and taramasalata and tzatziki on our very first holiday together in Greece back in 1987 and have never lost a taste for any. It’s fair to say Greek gastronomy has influenced and been part of our culinary lives ever since our first visit. 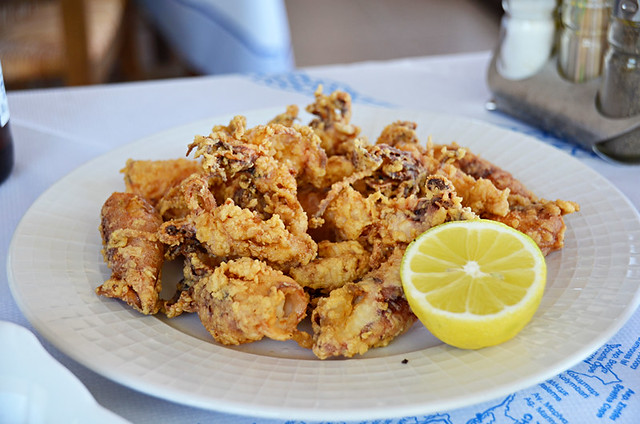 On the other hand we’ve also experienced our fair share of tepid oily chickens and chewy prawns served with wine as warm as fresh bull’s blood.

Crete was our seventh Greek Island and three weeks exploring its lush and lovely western side meant we were able to reacquaint our tastebuds with old friends as well as introduce them to some new and distinctly local ones.

These are the ten Cretan dishes which stood out for us. 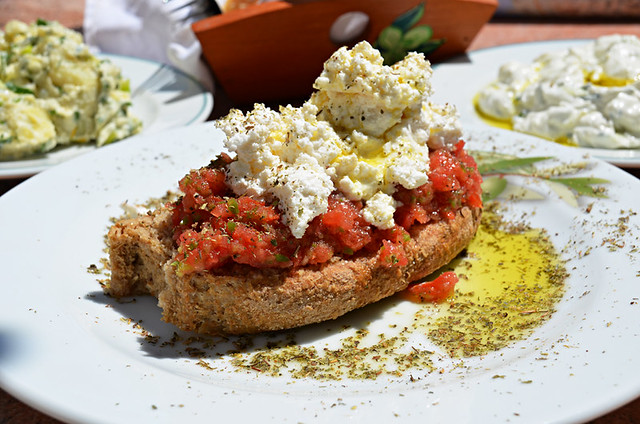 Arriving at lunchtime at the sun-kissed terrace of the rural Elia Hotel near Ano Vouves we were met with a “would you like some mezes and beer?” It’s the sort of welcome which should be compulsory if you ask me. One of the dishes was a colourful little affair called a dakos salad which consisted of a paximadi (a rusk-like hard local bread) topped with a tomato mixture, not unlike that used in Spain’s pan con tomate, and creamy myzithra cheese drizzled with olive oil, all of which was liberally sprinkled with wonderfully aromatic dried herbs. It was a sunny dose of savoury Greek freshness on a plate. 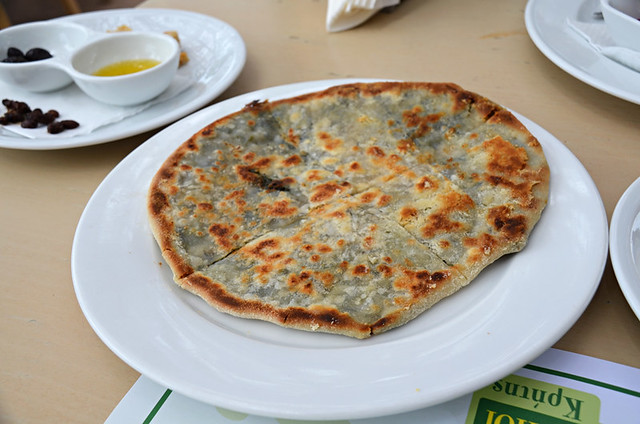 A stroll around the Botanical Park & Gardens of Crete conveniently ended at lunchtime. Conveniently as the gardens have a restaurant with terrace attached. In truth we weren’t expecting much as the gardens attract coach excursions and places which cater for coach excursions can be mediocre at best. Not so here. The food was interesting, tasty, nicely presented and also very good value considering its view rich location. Most intriguing was marathopita, a pie often described as being like a pancake filled with fennel. To me it looked more like a Scottish tattie scone filled with fennel. 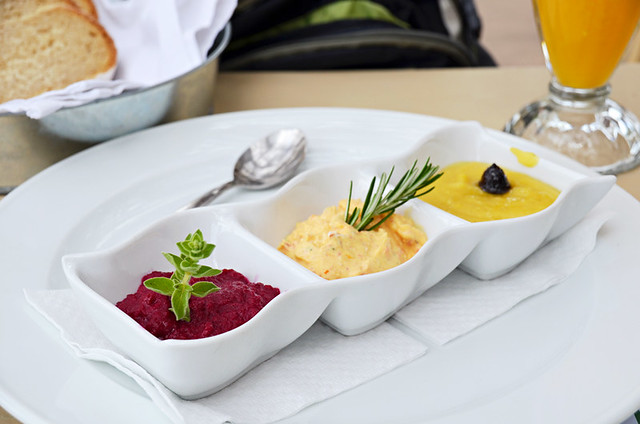 Part of a trio of dips also at the Botanical Park & Gardens of Crete, tirokafteri looked all innocent and sweet as it charmed its way into the mouth and then proceeded to give the tastebuds a good old slap about. To be fair it is described as a spicy cheese dip and that’s no lie. One of our new favourite Greek dips. 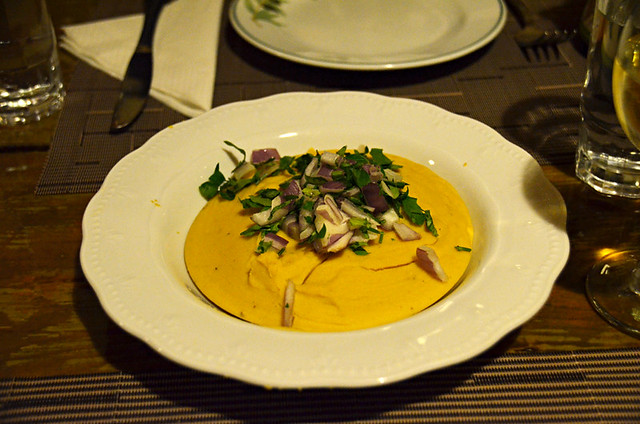 Another of the dips at the Botanical Park & Gardens, fava is a dip made from yellow split peas and its thick ‘beaniness’ is probably somewhat of an acquired taste. I liked it, Andy was less sure. Coincidentally it appeared again at dinner at the Elia on the same day, albeit a chunkier but more flavoursome version which reminded me of escaldón in the Canary Islands. 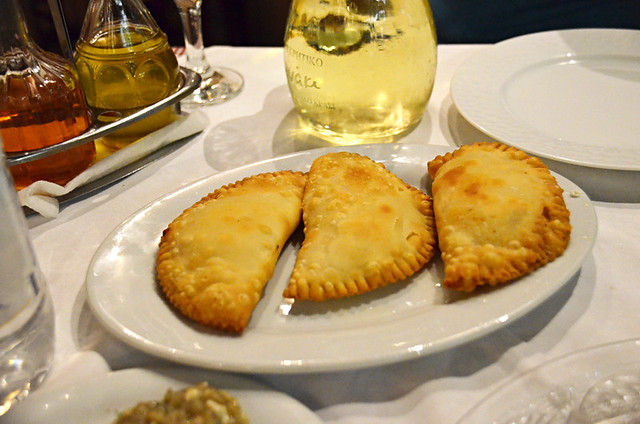 One for pastry freaks like me, kalitsounia are little pies filled with cheese, horta (wild greens) or a mix of cheese and horta (our preferred choice). We enjoyed these a few times, the best being the golden crescents at Steki in Chania. 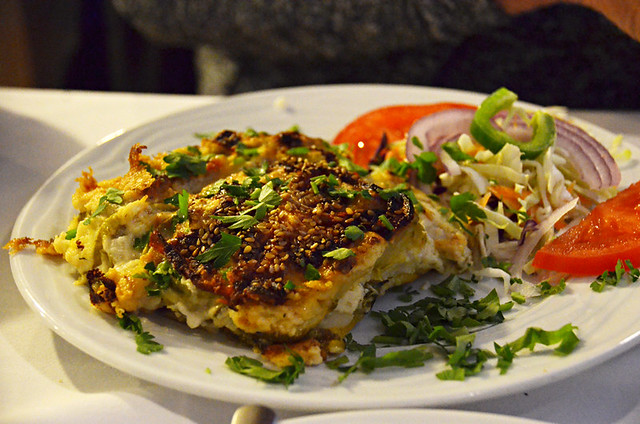 Being a layered pie, boureki looks like it comes from the mousaka school of cooking. In this case the layers are made up of courgette, potato and myzithra cheese which may, or may not, be topped with a sheet of pastry sprinkled with sesame seeds. It doesn’t pack a wowser taste punch, but it’s tasty enough and extremely filling. The one pictured was at Diktina in Kolimvari. 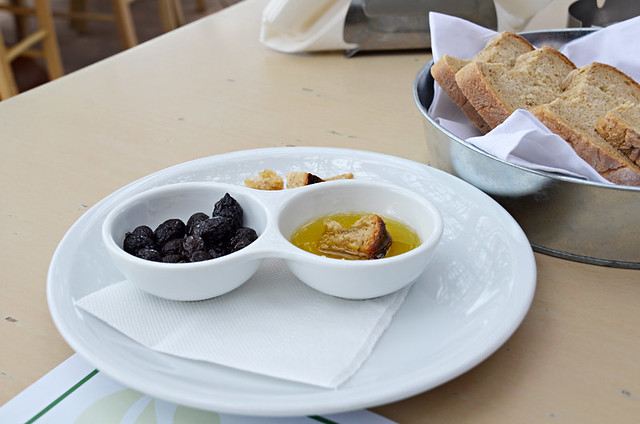 These usually appear with a basket of bread at the start of a meal. Forget plump, juicy, big green and black olives, wizened little Cretan olives look as though they’ve been left out in the sun too long. They’re small, dark and quite sweet. Possibly exactly the sort of olive for people who don’t like olives. 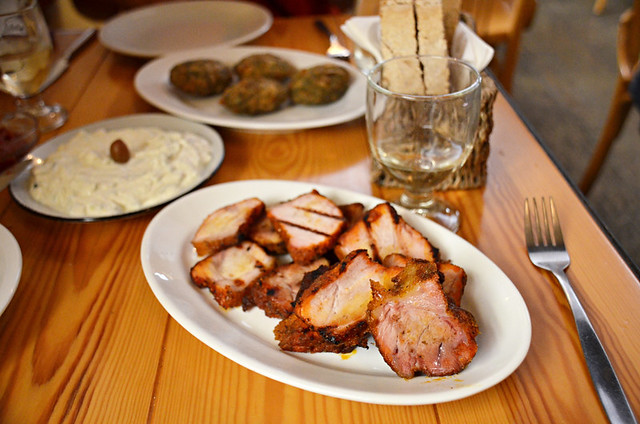 Pork will never taste the same again after you try apakia. The meat is marinated in wine vinegar for a couple of days before being smoked and flavoured with spices and wild herbs. It was our last day before we eventually got around to trying it at Tamam in Chania. That dull thud is the sound of me kicking myself for not ordering apakia earlier. 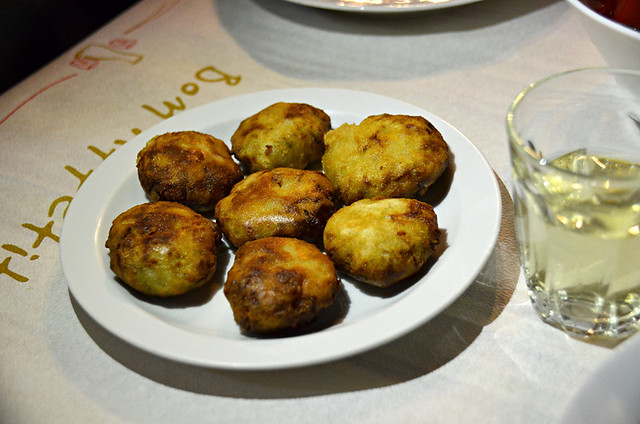 Crunchy on the outside, full of fresh and herby goodness on the inside, kolokithokeftedes are delicious courgette fritters (good with a dollop of yoghurt). These vegetarian friendly fritters come in various guises, the most interesting we ate were fennel fritters which tasted unusually different at first bite, but within a couple of munches became quite addictive. 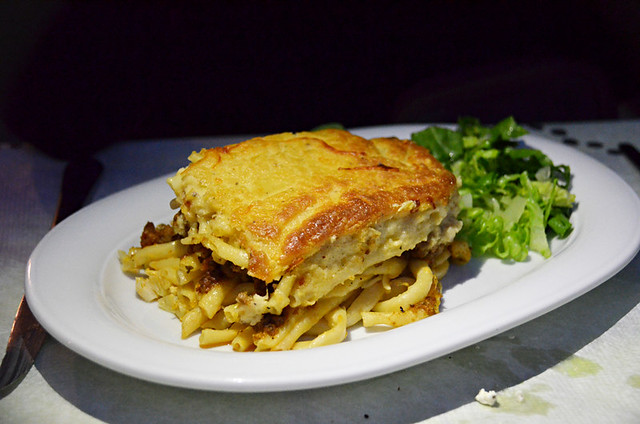 Another layered pie and one which if you’re not ravenous to the point where you’re almost gnawing at your own arm you might want to consider sharing. Pastitsio is a lasagne type affair consisting of minced meat, bechamel sauce, cheese, onions, pasta (usually macaroni or penne), tomatoes, herbs and spices. The chunky block pictured was the special of the day at Rebetiko in Sougia. It was lip-smacking tasty but a struggle to finish after a starter of baked feta cheese and a plate of tzatziki.

In Crete, as with the other Greek Island we’ve visited over the years, we found the most interesting and diverse dishes were to be found in the mezes, appetisers and salad menus… and we ate far too many of them.