There are some things which are deal-breakers for us when choosing to spend any time in the one location. Being within easy reach of a diverse choice of good places to eat is one of them. We already knew Setúbal in Portugal was famed for its choco frito (fried cuttlefish) restaurants, but we had no idea that the rest of the gastronomic scene was quite so, well, interesting.

In months we’ve not eaten at the same restaurant twice, and there are still restaurants on our ‘must try’ list. 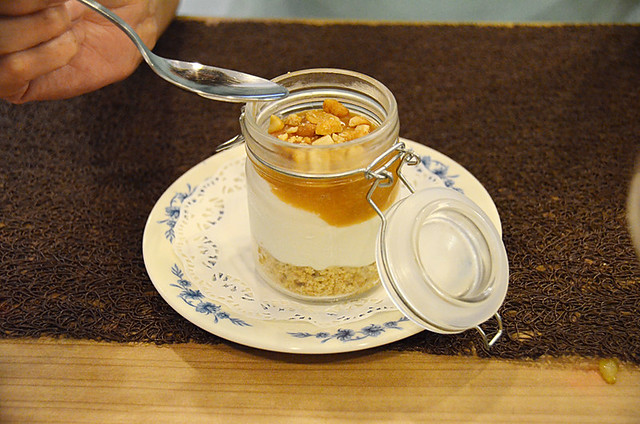 Ravenous, we rolled in early evening when the place was empty and promptly over ordered petiscos (small dishes). Generous portions included a pot of homemade crisps (sometimes confusingly served as ‘chips’ in Portugal), melted cheese with walnuts, choco frito, salt cod patties, gratinated scallops, and scrambled eggs with ham and mushrooms. All excellent and far too much food, but we still ordered cheesecake for afters. It came in a jam jar and was divine. As we left all the waiting staff waved a cheery farewell which was nice.
The look: Attractively quaint, a bit like an old fashioned shop full of curios such as Singer sewing machines, old TVs, record players etc. 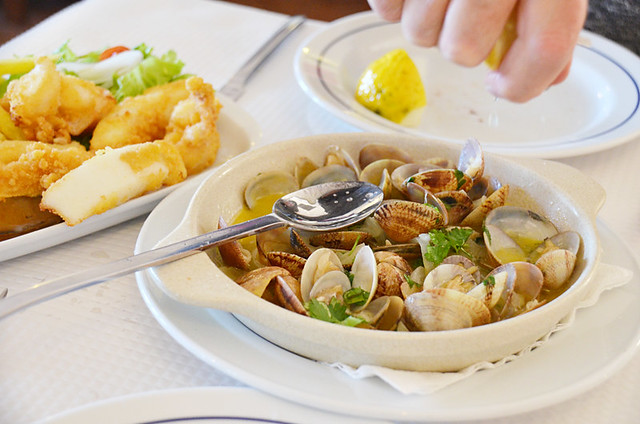 Amazingly the number 2 Setubal restaurant on Tripadvisor. Amazingly because it’s in a agricultural hamlet most visitors would never stumble across. The majority of reviewers are Portuguese though. It was packed when we visited one Friday lunchtime. There were too many tempting goodies on the mainly fish and seafood menu so we let the waiter decide for us. He didn’t let us down. Kicking the lunch off was snow white sheep’s butter and bread, then red peppers filled with moist crab, quail eggs on mini toasts, goat’s cheese on morcela, clams in white wine, and choco frito. Finally we completed the stuffing with apple pie and a slice of cake covered with baba de camelo (camel spit).
The look: A homely, typical traditional restaurant with no outstanding features. The food is more sophisticated than the décor would suggest. 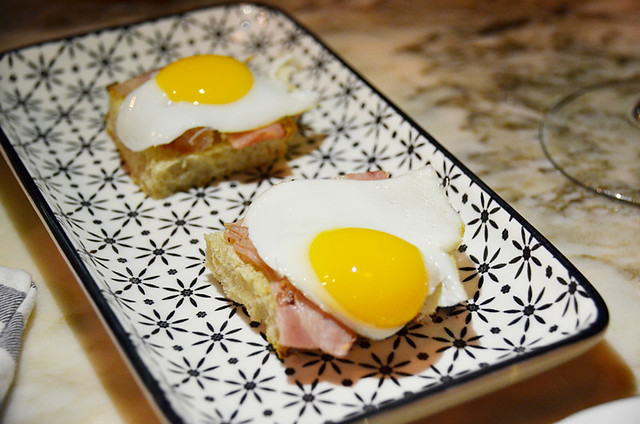 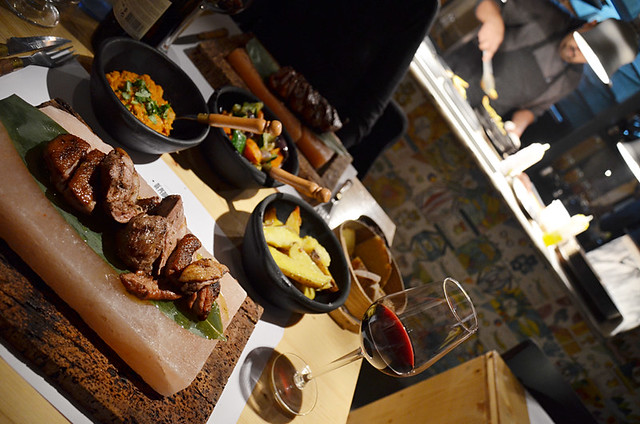 Specialising in grilled meat, this is not a place we’d normally go for. But more than one person recommended it so on a cool December night we gave it a try and loved it. For a start, the flames from the kitchen made the whole restaurant toasty. The open kitchen provided fascinating entertainment, and the way the food was presented was a talking point in itself. We got the juices flowing with a beautiful trio of oysters on a wooden board. Then came the meat, duck for me steak for Andy, cooked perfectly and served on marble slabs. Accompanying were clay bowls with a mix of vegetables, migas and sweet potato. There was no room for pud after that lot.
The look: the epitome of urban chic without being pretentious. Ropey lighting features (not in the dodgy sense), clean pine shelving units and tables, and funky tiled counters all combine to make it stylish yet intimate. 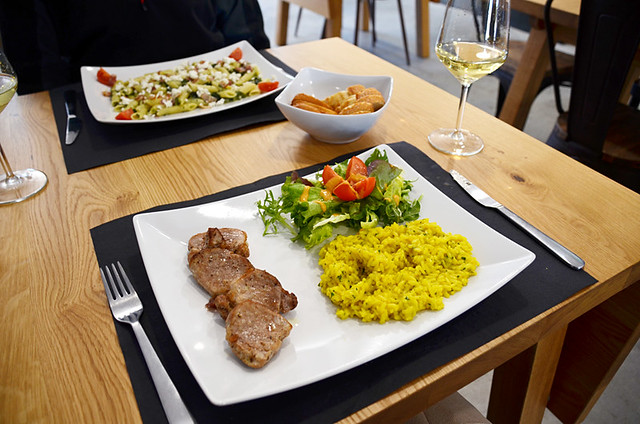 One of Setubal’s quirky dining options. As the name suggests photography features highly. It’s part photographic exhibition (you can pick up some nice prints and original postcards) and part restaurant/cafe. And also very friendly. Staff who spoke perfect English told us all about local wines and where gastronomic events were being held in the area. The food was as eclectic as the décor; a small menu including a few things we fancied. Savoury stuffed mushrooms were followed by fresh and zingy goat’s cheese pasta and pork fillets with a stunning lemon risotto. To round off we had a steaming rhubarb crumble which prompted a discussion with the waiter about whether Portuguese or British crumble was best. We decided they were just different.
The look: Quite cool and Spartan in a contemporary gallery sort of way. Not romantic dining, but hugely interesting. 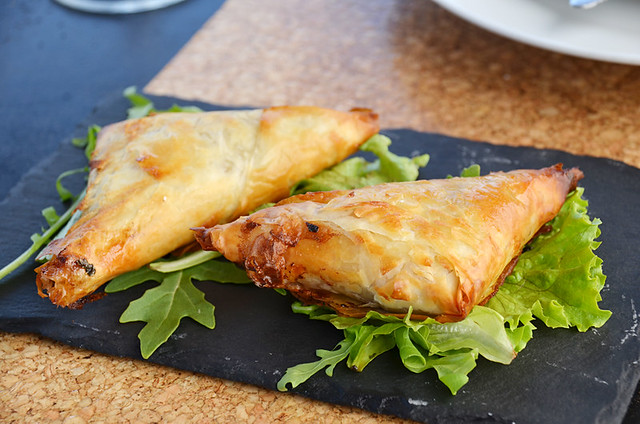 On a sizzling October afternoon we took refuge under an umbrella on the restaurant’s small exterior terrace opposite the town beach… and were still too hot. At the end of the area where most fish restaurants are located, Martroia’s menu offered something a bit different. Spicy chamuças (samosas), light and fresh octopus salad, gratinated scallops, and seafood wraps were just the right amount for lunch on a hot day. The puds were excellent; moist cakes served on chunky wood.
The look: Inside is rather masculine with wine coloured walls, black tables and chairs, and a chequered tile floor. The outside terrace has more of a modern beachside restaurant vibe. 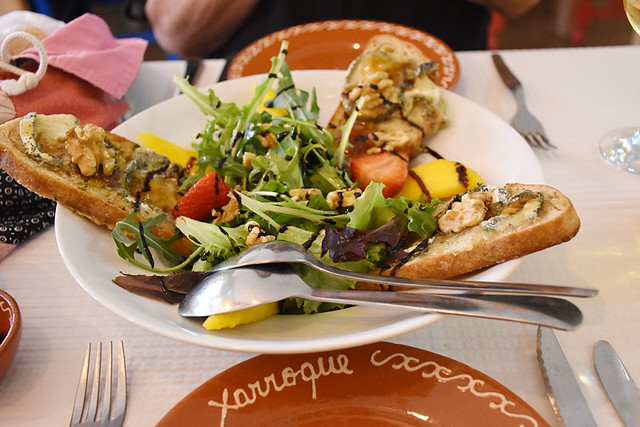 There was nothing particularly innovative about the food at this tiny tapas restaurant on a narrow side street in the old town, but it was prepared with care and the place had a lovely feel to it. The tasca was run by one woman with the help of her son, who looked about eleven. We were quite reserved having only a hearty salad, which included melted blue cheese drizzled with honey on lightly toasted bread, then chicken farinheira (Portuguese sausage) with scrambled eggs (most of the other diners were eating this), and finally meringue in a can (a nod to one of the town’s industries).
The look: Like the food; fresh and pleasing to the eye. A nice place to dine in. 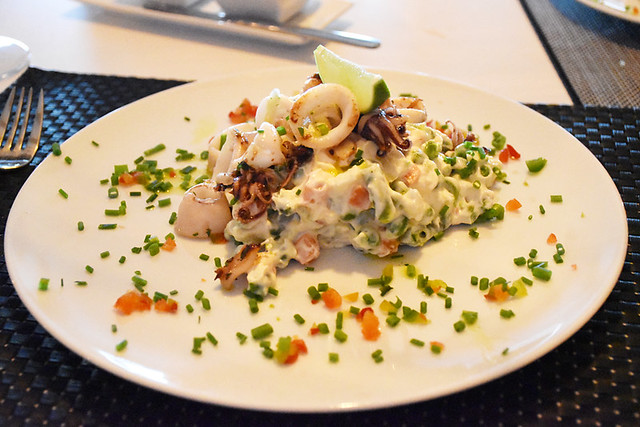 One of the nightlife spots in town has a small, funky restaurant with a terrace which overlooks the harbour. It also has a pretty talented chef. A ridiculously cheap taster menu (€30 for two) included chickpeas with salted cod, meatballs in a sweet tomato sauce, chourico with scrambled egg, squid and Russian salad, and pork fillets with creamy rice. Outstanding value for too much food. But how can you complain about that?
The look: Boldly creative with open cubicles consisting of extremely comfortable cube stools above which curved wooden slats completely transform what would otherwise be an ordinary ceiling. 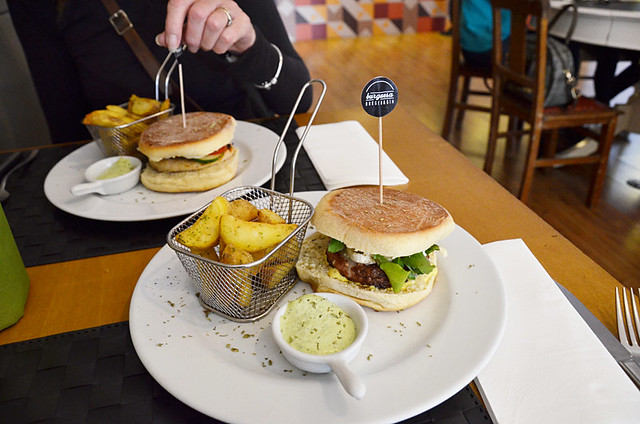 Sometimes I get a yen for a burger, a proper burger which hasn’t come off a production line. Occasionally I also fancy a G&T. Unsurprisingly this restaurant ticked a couple of boxes. There’s more than just burgers, we had alheira croquettes with rocket and nuts to start, but burgers are the speciality and there are lots of interesting ones to try. I had a wild boar burger whereas Andy had salmon and hake. Both were accompanied by wonderfully named camp potatoes.
The look: Stylishly studenty, the sort of place where you wouldn’t look out of place tucking into a book as well as an artisan burger. 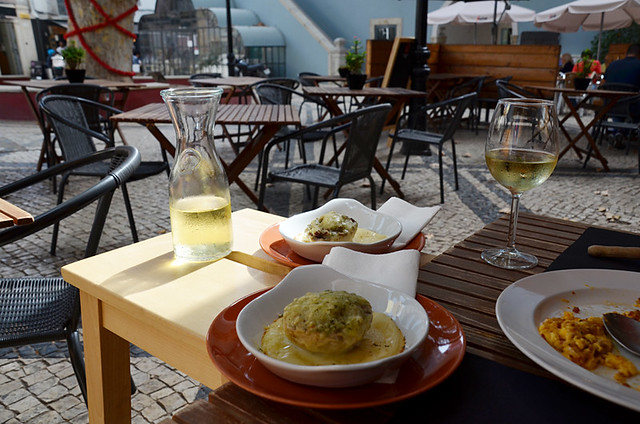 This friendly little Bohemian bar restaurant located on a pretty praça feels as comfortable a fit as a chamois glove. It’s a good spot for picking at petiscos whilst observing life in the small square. There was nothing fancy about our selection of chouriço with scrambled egg, sweet red pepper with ventresca (tuna) and stuffed mushrooms. But it was all tasty, especially the mushrooms which were superb. To end we had a Brazilian dessert.
The look: Casually and comfortably eclectic. The sort of bar to hang out drinking wine and discussing cult movies. 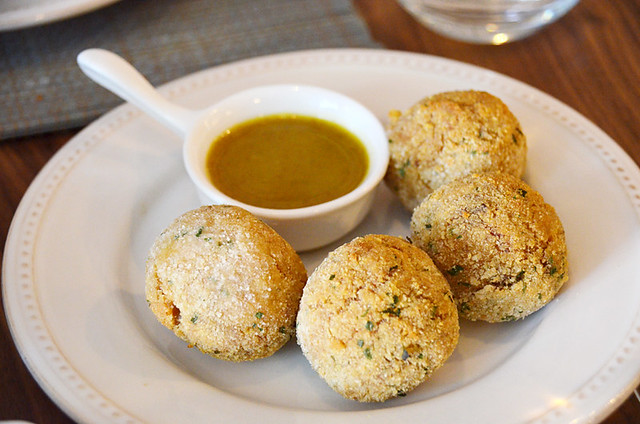 Love makes me hungry – another lovely, friendly small restaurant. We were the only lunchtime diners when we visited, which was a crime. It deserves to be busy. But we did eat there during a quiet time of year. We were given a complimentary port and tonic whilst we perused a menu which featured a selection of dishes which fused Portuguese cuisine with other influences. Spicy steak tartare was followed by smoked game (alheira sausage) meatballs and then Thai prawns with rice. We couldn’t decide on dessert so the waiter brought us meringue and lemon curd in a can, a chocolate brownie and a red fruit cheesecake and only charged us for two.
The look: Quiet sophistication; exposed stone walls framed by silver slate, wicker shades soften the light, and oatmeal and chocolate cushions add comfort to the seating. 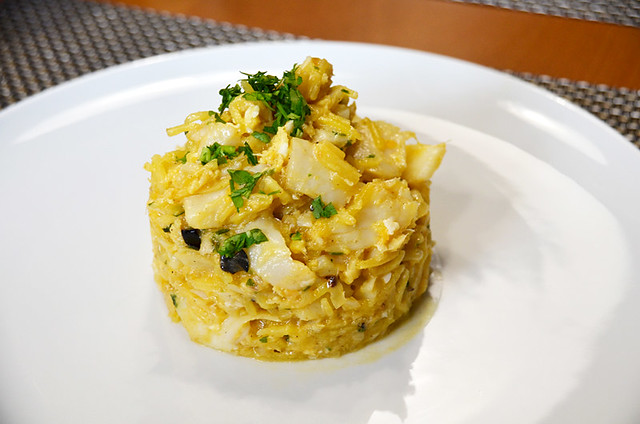 I applaud anybody who tries something different, so I was already in A-Mar’s corner before we stepped through the door of this ‘concept’ deli and restaurant. We ate a set lunch in the deli dining area rather than the restaurant, which meant we were seated beside a distracting wall of local products. The set menu had a few options; I started with mackerel in olive oil and balsamic vinegar whilst Andy had vegetable crepes. For main I had a decent bacalhau dourado and Andy opted for white fish with potato and broccoli. The dessert was anything we fancied from the shop’s artisan cake selection. For €16 with a glass of wine included it was good value even though in the end lunch cost us quite a bit more. We left with a bottle of strawberry tree firewater (medronho) and a jar of chestnut honey which had caught our eye as we ate.
The look: Like you’re eating in a modern delicatessen which, of course, you are. 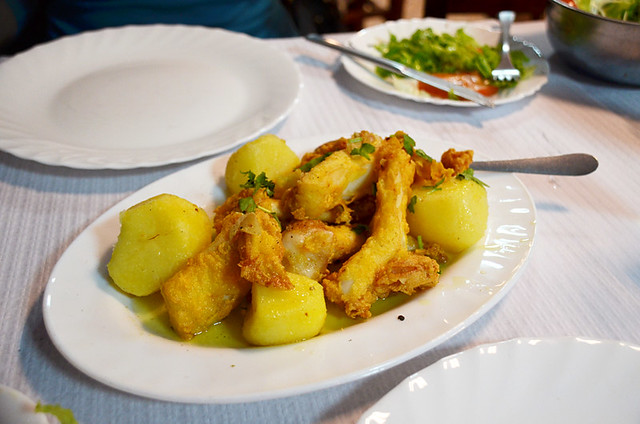 With so many great harbour-side fish and seafood restaurants in Setubal why pick O Ramila? Simple, it’s the first place we tried choco frito, with a mountain of fried fish and a bowl of salad to accompany it. The crispy tender cuttlefish showed us we hadn’t eaten really good choco until that point. The place was so noisy with locals we could hardly hear ourselves chomp. It was a jump-in-at-the-deep-end introduction to Setubal’s gastronomic scene and we loved it.
The look: A barn of a place with long tables and walls lined by fish tanks. It might be too frantic for some, but this is the real deal when it comes to trying the town’s most famous dish.

What’s so good about Ljubljana

Sitting in a riverside bar in Ljubljana and the movie Logan’s Run pops into my head; I instinctively close my fist around what would be a black-for-an-aeon palm flower embedded into my palm. Ljubljana is a young city, possibly the youngest-feeling city we’ve visited. Young and vibrant. […]