We land bang on time, 9.30am in a new city, new country and new continent; Santiago in Chile.

Passport control is a cattle market, packed with unsure travellers and savvy locals who know the drill. We obey the barking orders of an official who directs us to a long, snaking queue which seems to be for Chileans only. I worry we’re in the wrong line all the way till we reach a row of cubicles which have been clogged up by a group of French-speaking travellers. Their exaggerated gesticulating makes the process look complicated. It isn’t. We breeze through in seconds, passports with new stamps. 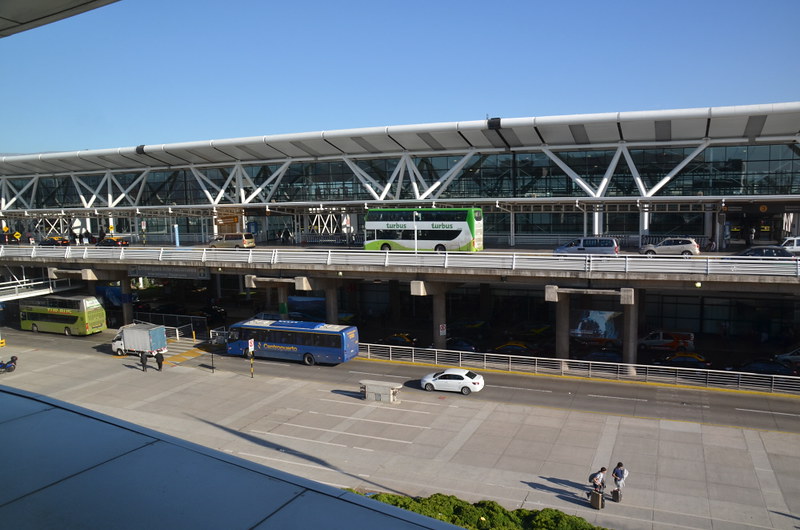 We emerge into blinding, early morning sunshine. The temperature is already mid 20s C. It would be wonderful if we weren’t dressed for the 8C we’d been expecting. We’re met by the amiable Anthony who leads us to his car a couple of hundred metres away, by which point we’re already genned up on the country’s politics and the future of the airport. By the time we complete the 20 minute journey to the Hotel Luciano K our jet-lagged brains are buzzing with fascinating facts, like Chile having a football team called Everton. Anthony is full of info.

It took us so long to breakout of Santiago’s airport it’s midday by the time we check into the Luciano K, an Art Deco hotel with the oldest lift in the city, one with wrought iron gates, the sort that regularly featured in Alfred Hitchcock movies. Our room is ready and we’re able to ‘freshen up’ after the long flight from Madrid. 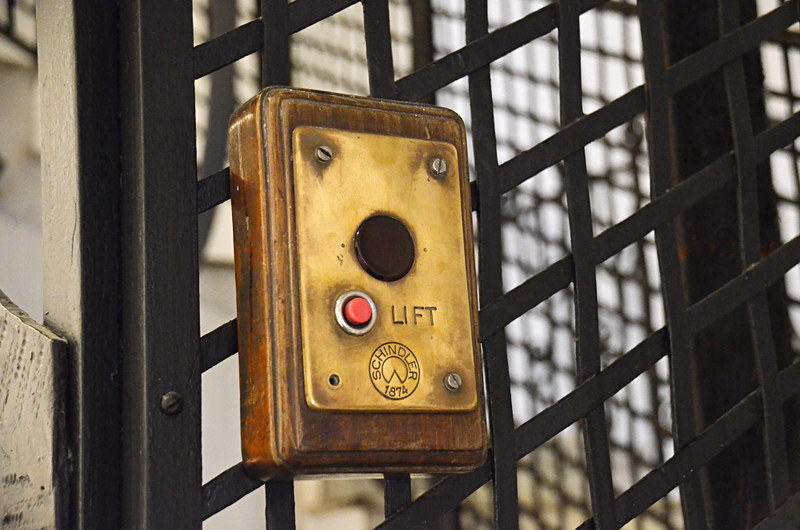 Saturday afternoon in Santiago
Thanks to already having a Santiago city route to follow plus driver Anthony pointing out highlights on our way in we’re able to hit the ground running, well strolling as it’s so hot.

The hotel lies opposite the ornate Neoclassical Fuente Alemana (the German Fountain) on the edge of Parque Forestal, a long thin strip of greenery which runs alongside the Mapocho River. We cross the park and dive straight into Pio Nono, an avenue lined by barn-sized bars offering lomo pobre, pollos a la brasa and pescado frito. We need to exchange money and we need to eat. 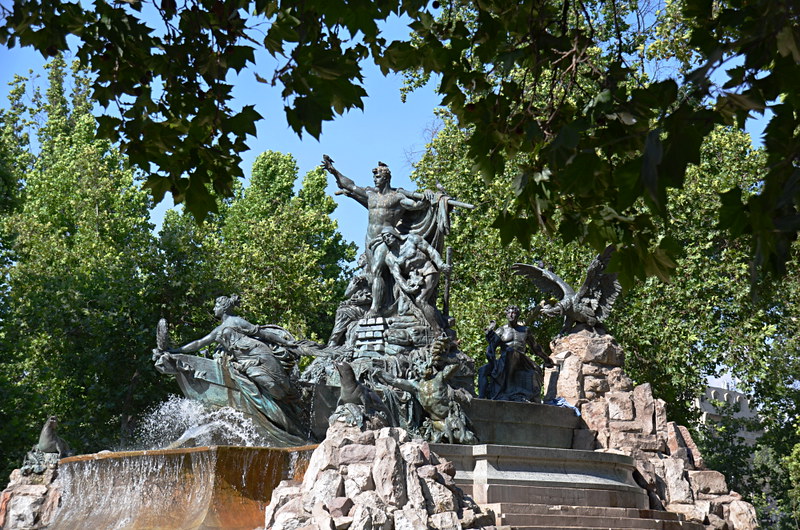 Following directions from the hotel’s receptionist we find a money-changer inside Patio Bellavista, a relatively new complex of colourful contemporary bars and restaurants which is slightly more sanitised and less frantic than Pio Nono itself. The money-changer’s shop is little more than a doorway. We hand over a wad of cash and get a bigger wad of 1000 peso notes back. Our fuzzy heads struggle to work out the exchange rate. Seeing prices in thousands makes everything seem expensive.

There’s a wine tasting event in the centre – it’s sunny, there’s a jazzy soundtrack and Chilean wines are flowing. Taste as many as you want for 10,000 pesos (around €10). If we had a few days in Santiago we’d happily lose the afternoon here drowning in maroon rivers. 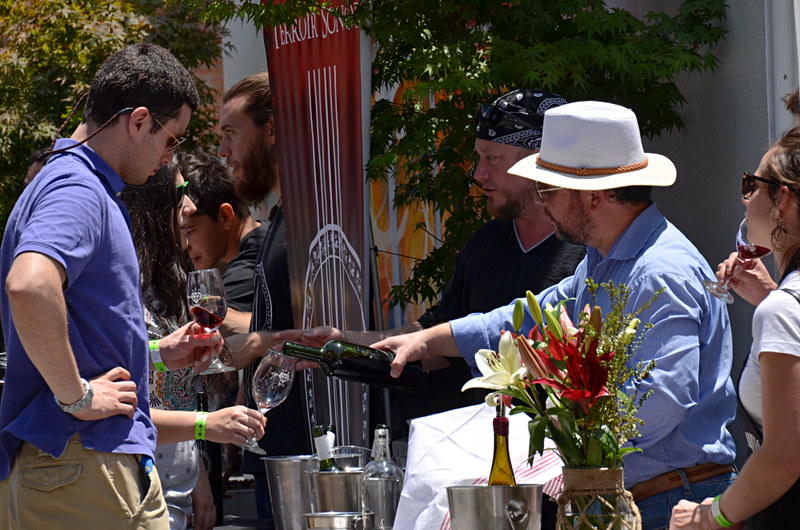 Instead we grab meaty Chilean sandwiches at the appropriately named Cosmopolitan restaurant and wash them down with dark Austral beer which goes straight to the head. Santiago oozes cosmopolitan. Unmistakably South American but with a distinctly European side, it instantly feels familiar. The music blaring out around the Bellavista is mainly 80s and 90s Brit and American. It’s slightly surreal to be singing along to Tears for Fears and Oasis in a South American city. 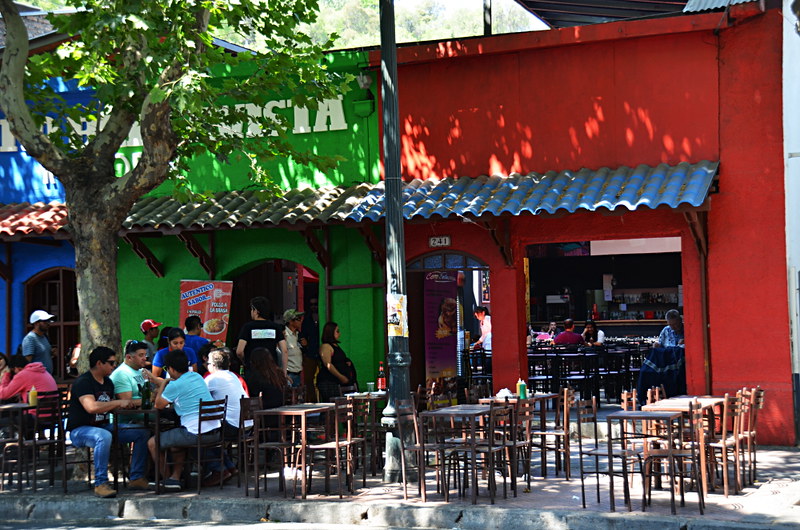 Fed, watered and acclimatized we return to the raw bustle of Pio Nono where umbrellas are tilted sideways to block out the sun and every wall bombards eyes with multicoloured street art. Santiago is a city with an arty, bohemian bent. At one end of Pio Nono is the mini mountain of Cerro San Cristobal, home to the city zoo. At its base are a wagon train of kitsch carts selling pap and cold drinks. 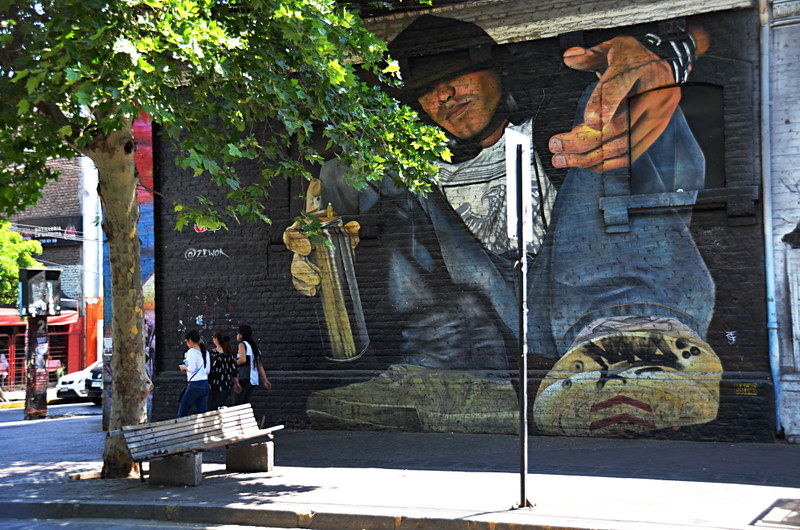 We give the Cerro a body swerve and return to Parque Forestal where couples lounge along the length of the narrow green strip – girls and boys, boys and boys, girls and girls. This openness sends a positive message about Santiago. Parque Forestal is the playpen of the city; some people jog or cycle, most relax in the shade, others mess around having fun;we watch a battle of bubble people for a few moments. 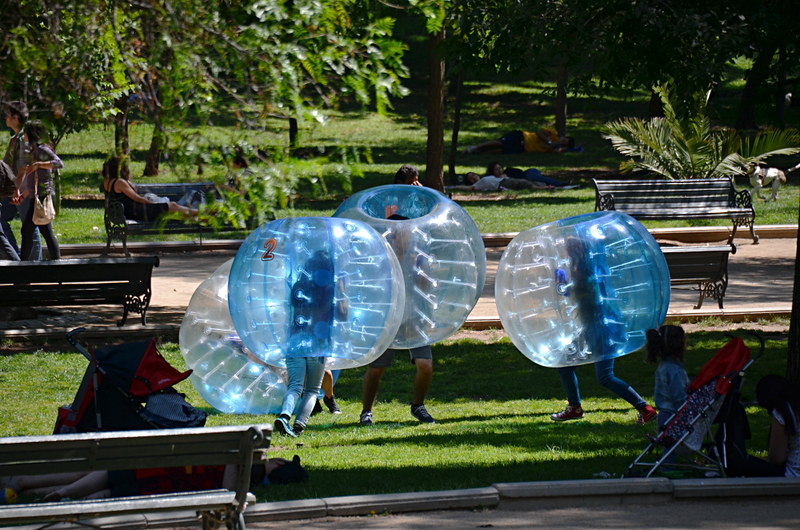 Our route takes us past the palatial 19th century Museo de Bellas Artes and through the Parisian styled iron framework of the Central Market built in the late 19th century in an area once known as the Dominicans’ garbage dump. As it’s a fish market, there’s still a bit of a distinctive reek to the place. 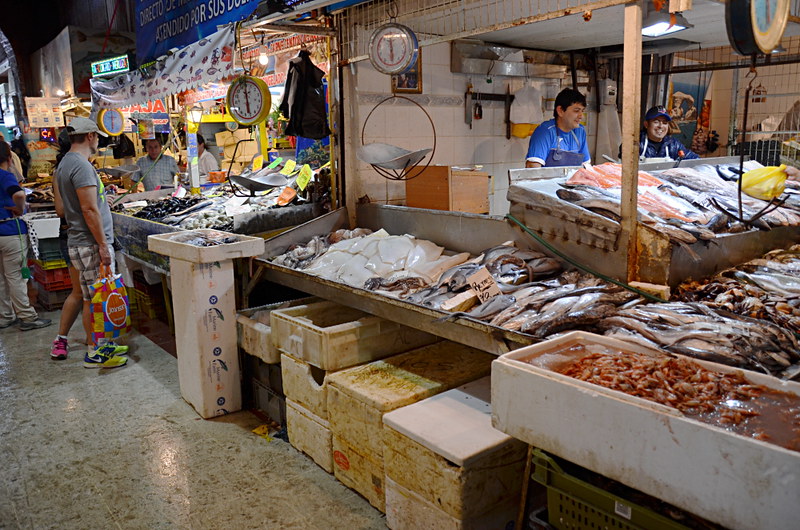 Before heading back to our hotel we take time out on a shaded bench on Plaza de Armas which is bordered by the grand Metropolitan Cathedral and National History Museum as well as modern tower blocks with mirror windows. There’s a different vibe to this plaza. Whilst visitors snap away at the museums’ ornate facade on the fringe of the square, passionate orators address locals in the plaza’s busy heart. 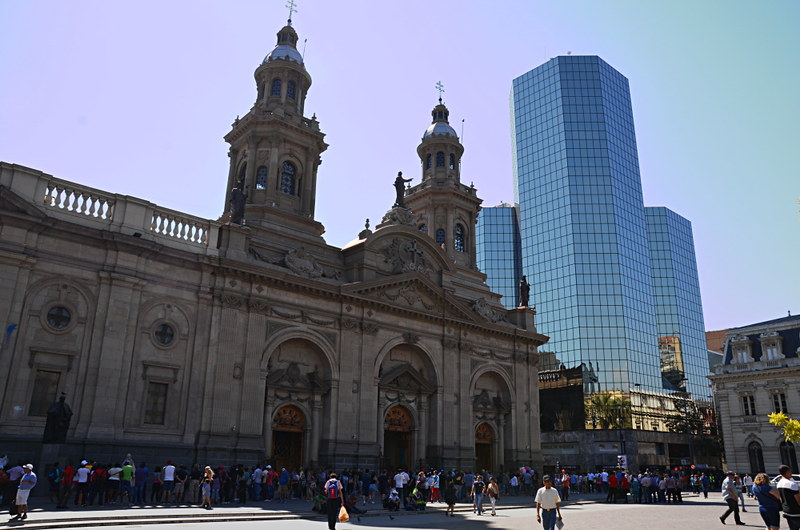 Saturday Night in Santiago
Prior to heading out to dinner I attempt to buy a bottle of wine. It takes longer than anticipated. The mini-market across from our hotel doesn’t sell alcohol. In the end I pass money through the grill of a seedy off licence I find nearby and have a bottle of vino thrust into my hand in return. My mission is also to buy suntan lotion; not easy. After failing in a couple of supermarkets I eventually find out it has to be purchased from a pharmacy. Go figure. 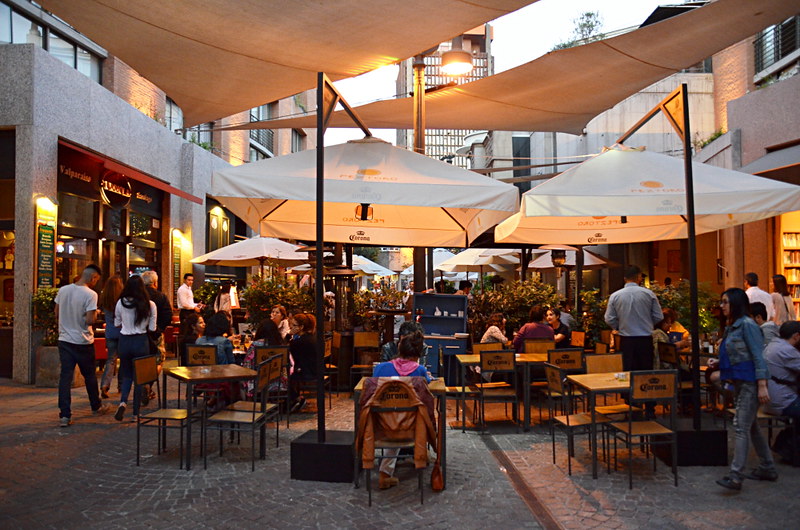 The hotel borders Lastarria, a gentrified triangle of happening bar restaurants where urban artisans lay out imaginative wares on cloths on the pavement. It’s the sort of place where having an owl’s head-swivelling abilities would come in useful. Mixed in with the restaurants are bookshops, another sign that endears me to any city. 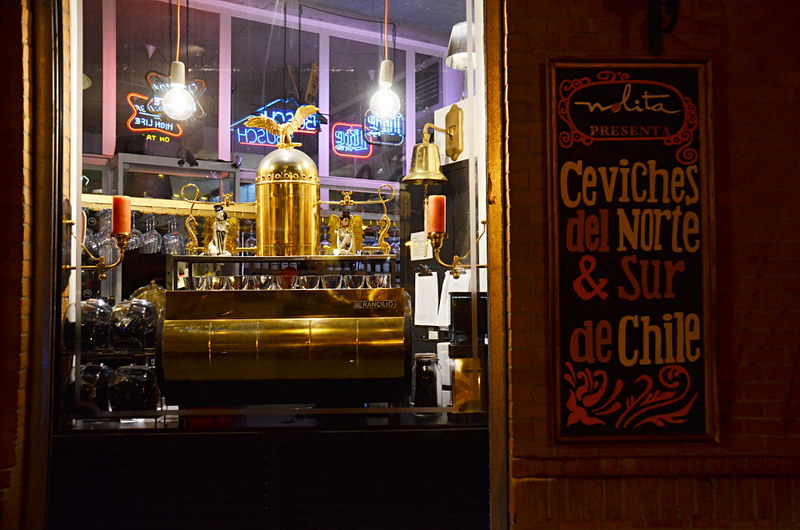 We eat delicious ceviche, empanadas and prawns with quinoa at Casa Lastarria before exploring the neighbourhood further, discovering we can only get into the most inviting looking wine bars if we order food as well. Thwarted, we head back to nightlife central, Pio Nono, where Patio Bellavista is rammed with people eating, drinking and listening to live music which ranges from bluesy jazz to sultry Latino. We want to embrace to the sizzling Santiago scene, but jet lag (and potent pisco sours) take their groggy toll and we return to the hotel around midnight. 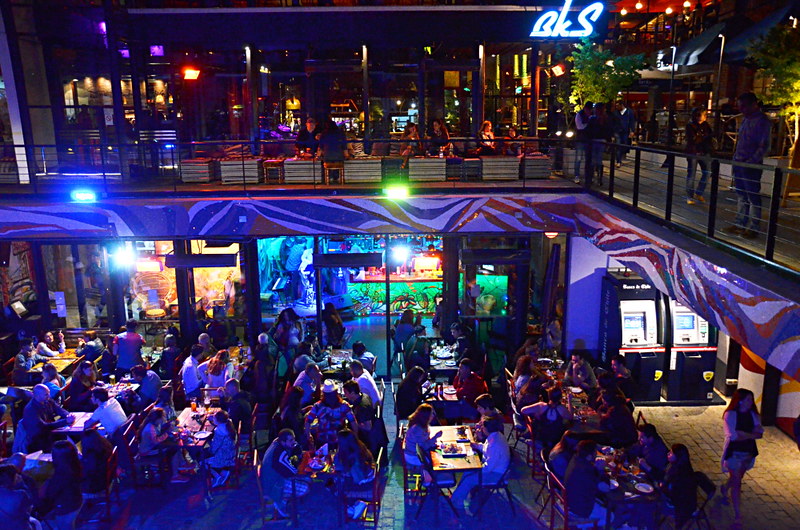 Sunday morning in Santiago
The streets are deadly quiet, like a city on a Sunday when I was young. This is partly because they’re closed to traffic due to a mini marathon taking place and partly because Sundays in Santiago are for leisure pursuits. In a bid to combat the threat of obesity, there’s a national fitness drive. Parts of the city are given over to families so they can cycle, run, or do whatever they want to keep fit together. 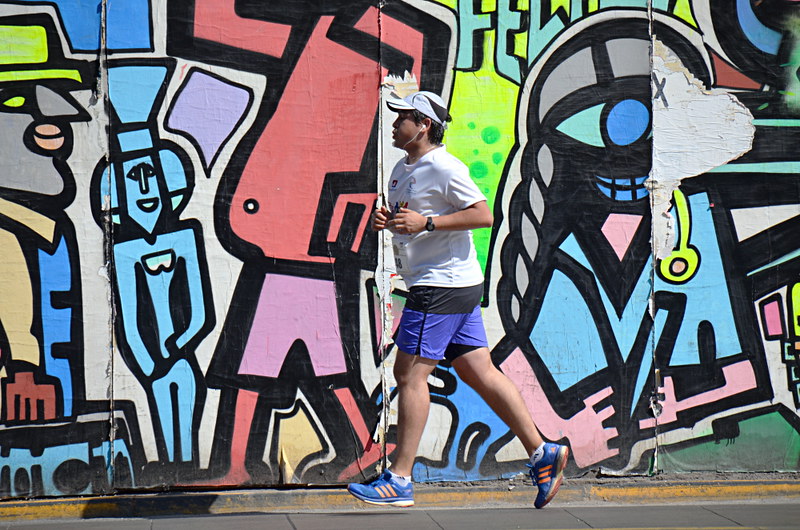 We’ve a couple of hours before we have to head to the airport to move on to southern Chile, so we take the chance to explore a quiet Avenida O’Higgins, the city’s main avenue. There are streets and avenues all over Chile named after Bernardo O’Higgins, the country’s liberator who hailed from Irish stock, if you hadn’t guessed. Even on a sleepy Sunday there’s a compelling mix of energetic bizarreness in pockets along the avenue. In the open courtyard of the attractively rusty, and closed, Gabriela Mistral Cultural Centre we stumble across a posse of dancers practising moves to Chicago’s Cell Block Tango. Opposite, in studenty Parque San Borja, we can’t quite figure what’s going on. All we know is it’s a tournament of some sort featuring teams of overly made up girls wearing tight sportswear, one of which calls themselves the Kardashians. 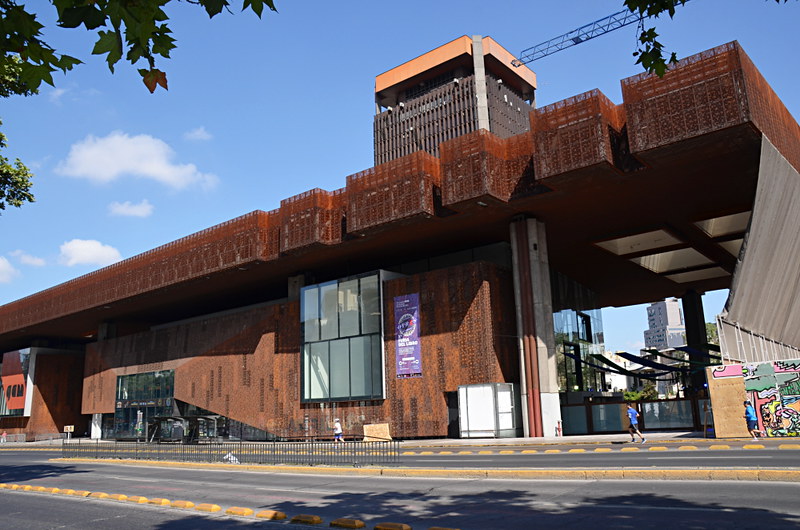 All too soon, but over half an hour late due to closed roads, Anthony turns up to take us to the airport. The sedate Sunday turns into a mad dash to catch the plane. Thankfully, unlike arriving, catching internal flights is a quick, no fuss business. 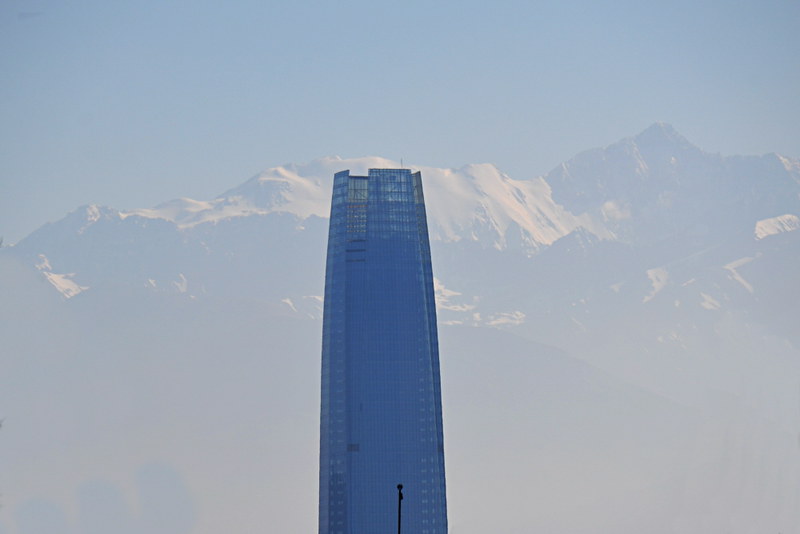 As we climb above the hazy smog which partly obscures what would be a spectacular backdrop, the Andes, I feel a sense of regret about Santiago. Regret we had little more than 24 hours to enjoy a taster of a city whose dazzling personality managed to get right under the skin almost from touchdown.

We follow the maze of slate lined streets past whitewashed cottages where geraniums trail from window boxes, their blooms escaping to freedom through the wrought iron bars covering tiny windows… […]