There’s a slight heat haze rippling the air above the quiet waters of the River Lima as I sit on the bench, gazing across the endless meadows and reed beds that flank the far bank. It takes a few seconds for my consciousness to register the fact that the constant drone of the tractor in the background has stopped, and I turn around to see the driver climbing down from the cab of the vehicle which is now parked in the shade of a tree at the back of the picnic ground.

Turning back to the river, something catches my eye, movement by the water line about 200 metres to my right, on the far bank of the river. Squinting into the sun, I see what at first looks like the torso of a large man hauling himself out of the river, his withered legs dragging behind him, leaving a scar in the sandbank. Slowly, as he drags himself clear of the water, his torso upright from the waist only, I try to focus my eyes better, shielding them from the sun’s glare with my hand and realise it’s not a man at all. I have no idea what it is.

A footfall startles me as the tractor driver walks slowly past and steps onto the boardwalk that hems the river. His face is turned back towards the ‘thing’ on the far bank but I can’t tell whether or not he’s watching it. Suddenly, he steps off the boardwalk and disappears down the bank towards the water’s edge. Looking back towards ‘the thing’, I’ve lost sight of it. My eyes scan the far bank either side of where it emerged but I can’t see anything, the scar in the sand seems to stop at a clump of reeds. Then I spot it, beyond the reeds, heading towards the tree line, still moving awkwardly, dragging its lower torso behind it. Now completely distracted by what the hell I’m looking at, and wondering what on earth the tractor driver is doing, completely hidden from view down at the water’s edge, I wish Jack was here to provide a witness statement and second opinion to the mysterious goings-on by the river. But he’s on a desperate mission of his own and, as bizarre as my sighting is, I fear it may pale into comparison if he returns empty-handed. 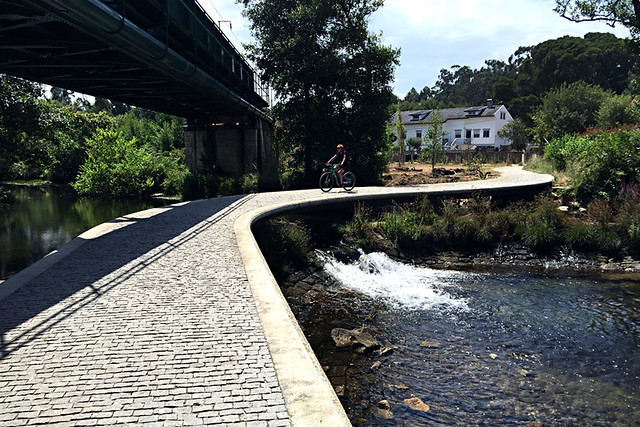 We’re currently cycling from Ponte de Lima to Viana do Castelo in the Minho region of northern Portugal, following the ecovia walking and cycling path that flanks the River Lima all the way to its source on the Atlantic coast. The last time we stopped was at the tiny hamlet of Passagem where some picnic tables overlook the river. While I strolled and rested my saddle-sore backside, Jack went down to the river and into the hamlet to take some photos. Reaching this small picnic area some 4km or so later, we decided to stop for an energy bar and to take some photos of the gorgeous countryside that accompanies the ride along this stretch of river. That’s when Jack realised he’d left his camera on the picnic table at Passagem. Leaving his rucksack with me, he climbed straight back onto his bike and sped off, back down the ecovia in the hopes it might still be where he left it. As this is Portugal where, outside of the large conurbations, crime rates are delightfully low, the chances are pretty good that the camera will still be sitting on that table but it doesn’t stop a cold sweat from spreading across my back and I know Jack will be beyond frantic and peddling like crazy to get back there.

As I watch ‘the thing’ slowly crossing a large field towards the tree line, now some 300m or more in the distance, I find myself intoning the words: “Please let it be there. Please let it be there,” over and over again in my head. Anxiously watching the bend in the path where Jack will reappear, the tractor driver emerges some six or seven minutes later and strolls back to his cab in the shade. When I look back at the river, the ‘thing’ has disappeared.

Another hot, 20 minutes passes before I see Jack rounding the corner and cycling towards me. The lack of a camera around his neck and the disappointment on his face tells me all I need to know. The camera has gone. Amidst his self-recriminations and recounting his attempts to track the camera down by interrogating everyone he saw, my curious sighting slips quietly into the shadows and it isn’t until we’re about to press on that I tell Jack about it.

That was back in late July and to this day, I have no idea what ‘the thing’ was. I know it wasn’t a sealion because it wasn’t sleek and shiny, nor did it have those distinctive flippers that extend at right angles to the body. The closest thing I can think of that resembles what I saw and the way it moved on land, is an elephant seal. But in the River Lima? Of course, with no camera I have no evidence of what I saw to help me analyse it, so it will remain a mystery, one that unfolded in the midst of a drama.

It seems like a simple question. But the answer isn’t as simple as you might expect. This week, whilst pulling together images for an article we’re writing about hiking in different parts of Portugal, I […]