Sunday morning probably wasn’t the smartest time to decide to visit Belém, Lisbon’s most grandiose historical area and a favourite haunt of explorers with itchy feet. Henry the Navigator and Vasco da Gama set sail on historic voyages from Belém whilst Christopher Columbus docked there on his return from discovering the Americas. Anywhere with such a heritage just has to be visited.

However, after a Saturday night enjoying (too much) Lisbon’s Barrio Alto scene and being jostled by a sardine crowd of people with similar intent who surged towards every jam-packed tram that appeared as though they were fleeing from a war zone, I seriously went off the idea of a trip to Belém.

Andy is made of sterner stuff and so we persevered as full tram after full tram trundled by our stop. 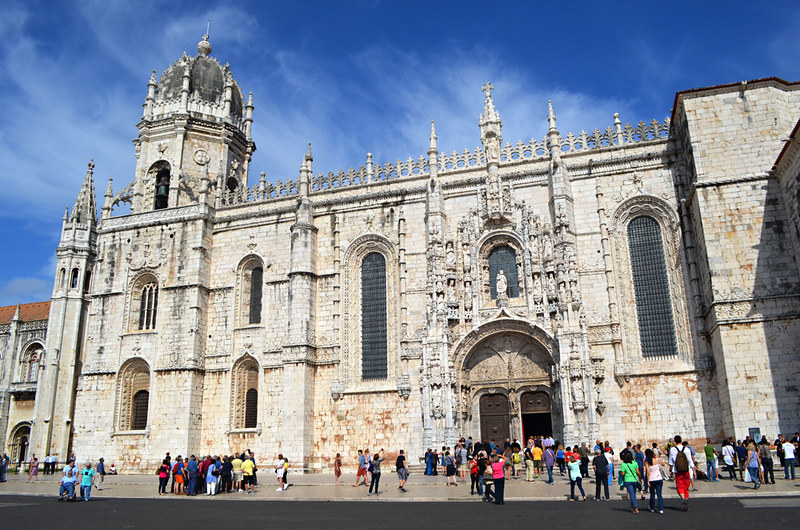 Getting to Belém
We learned quite quickly that the number 15 tram might be a quaint way to travel along the coast, but from our position to the west of the centre of Lisbon, getting on one on a Sunday morn was a pipe dream. A better option was one of the four buses (727,728,729, 751) which covered the same route. As we had a Lisboa Card, there was no need to fiddle with money. Although Belém is only a few kilometres from the centre of Lisbon, it took us nearly thirty minutes to arrive at the bus stop opposite the Mosteiro dos Jerónimos; an easy landmark to spot when it’s your first time to the area. 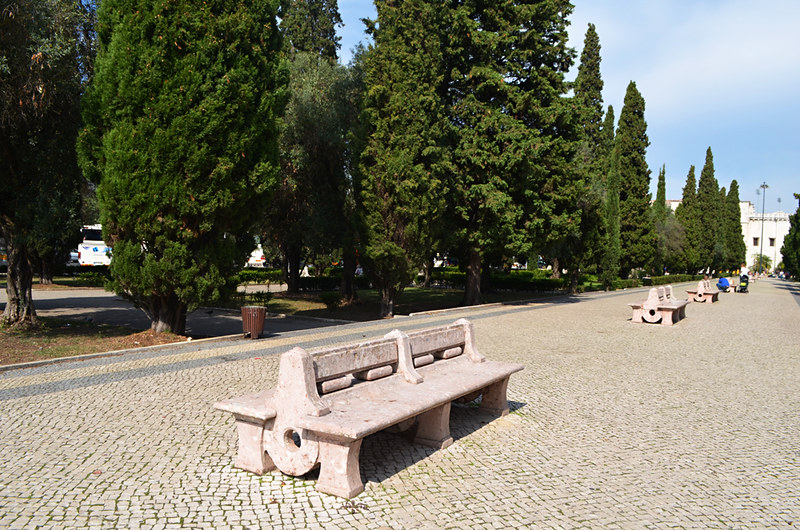 Coffee Break
Everyone seemed to be converging on the area at the same time, with coach excursions depositing their human cargoes in the gardens opposite the Mosteiro dos Jerónimos. We decided to let the crowds disperse and take some time out for a coffee and a cake. Like many places that are visited by coach excursions, we didn’t have to walk too far to escape the masses. Pastelaria Adamastor along the road from the monastery was empty save for a couple of locals hunched over the counter/bar area. It had good coffee, great cakes and was the perfect place to revitalise before an exploration. 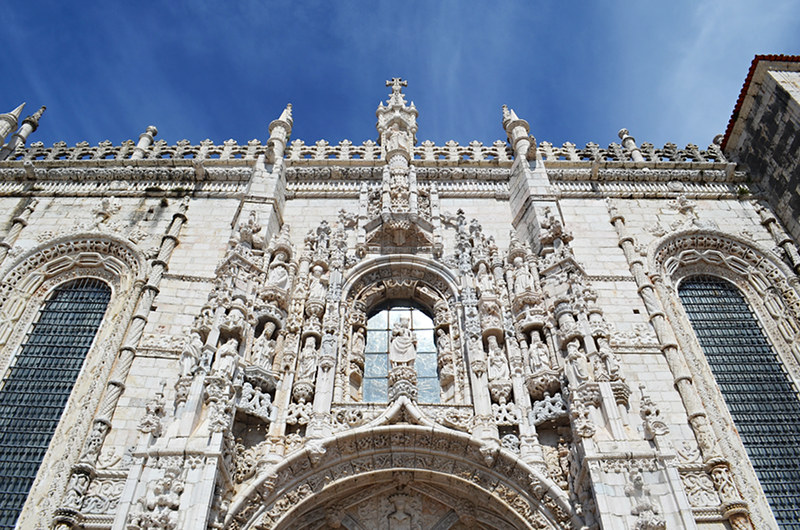 Mosteiro dos Jerónimos
The huge and intricately sculpted Mosteiro dos Jerónimos dominates the Belém scene. Built in the 16th century by King Manuel 1 in honour of Henry the Navigator, it’s the first port of call for many visitors. Ironically the most eye-catching entrance isn’t the main entrance. It faces the River Tagus and it’s where people queue up to get in, but it’s technically the side entrance. In between the two arched doors is a sculpture of ‘our Henry’. Having the Lisboa cards meant entrance was free for us. But as we waited in line, our eyes were drawn by Belém’s other attractions and we decided that much of Belém’s real charms seemed to lie in the parks and promenades that lined the Tagus. Plus I wanted to get a photo of the Monument to the Discoveries whilst the sun shone.
(The Mosteiro dos Jerónimos is open from 10am to 5.30pm October to March and 10am to 6.30pm April to September; entrance is €7, better value is to buy a ticket for entry to more than one monument, closed Monday) 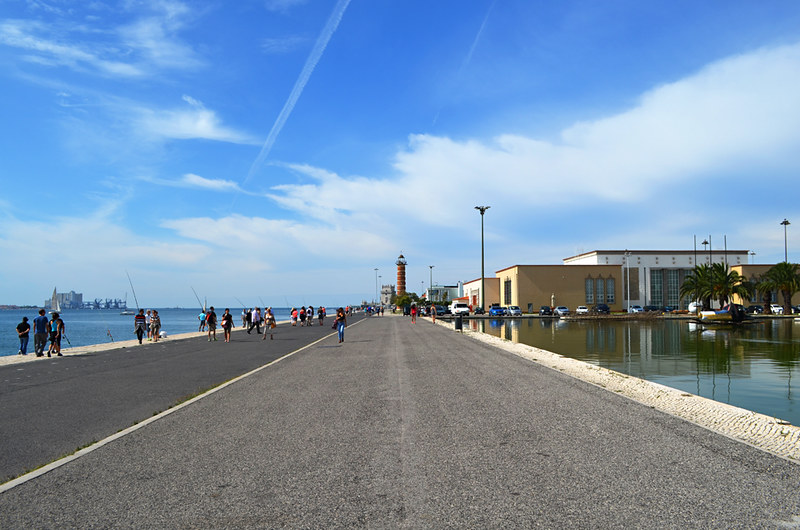 Walk in the Gardens
Many day trippers head to the museums and monuments leaving the gardens relatively people free. Avenues of cypress trees, fountains, pools, statues and quirks such as a mini Thai temple made strolling between the historic highlights a relaxing and enjoyable affair. 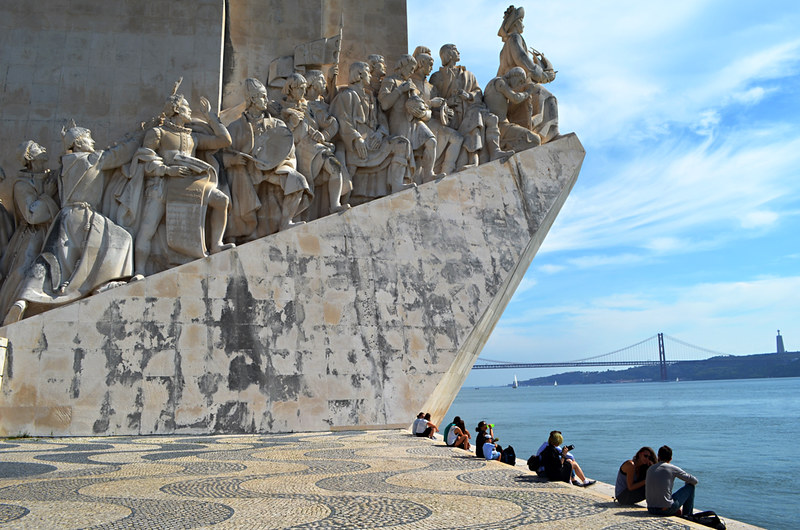 Monument to the Discoveries
A glorious work of architecture that perfectly captures Portugal’s spirit of exploration. Henry the Navigator (who else) heads up a motley crew of 32 explorers, navigators, cartographers, colonisers, soldiers and missionaries as the monument juts out over the Tagus. It’s a beautiful and inspirational monument which was first built in 1940 for an exhibition and finally made permanent in 1960, 500 years after the death of Lisbon’s favourite explorer.
There’s a seductive atmosphere around this area. Where some visitors queue to get inside, others lounge by the river, their eyes dreamily following Henry’s gaze. The views are good from ground level, but what you get from the heights of the Monument to the Discoveries is a view of the 50m in diameter mosaic compass at its base.
(The Monument to the Discoveries is open from 10am to 5.30pm October to March and 10am to 6.30pm April to September; entrance is €3; closed Monday between October and April) 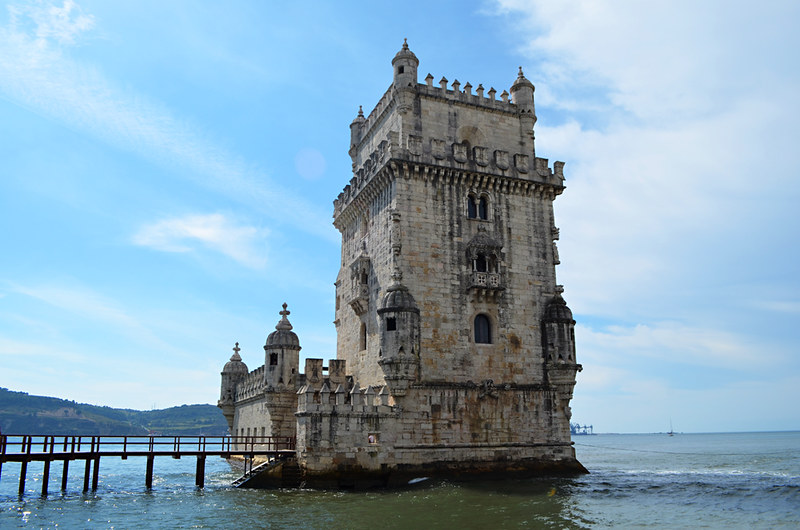 Torre de Belém
The Torre de Belém further along the coast is pure Game of Thrones material. The squat, but beautifully carved, tower sits just offshore and is reached by a gangway that leads to the drawbridge and the evocatively named guillotine gate. Built in 1520 to protect the city, the Tower of Belém has lead a colourful life, doubling as a customs house, telegraph office, lighthouse and a jail for political prisoners.
(Same hours as the other two and closed on Mondays; entrance is €5)

Strolling along the long, wide promenade worked up an appetite and somehow the hours had slipped easily away. Before we knew it, we were in danger of letting lunchtime pass us by. There were two things we still wanted to do before we headed back to the city. Eat something and buy a Pasteis de Belém. 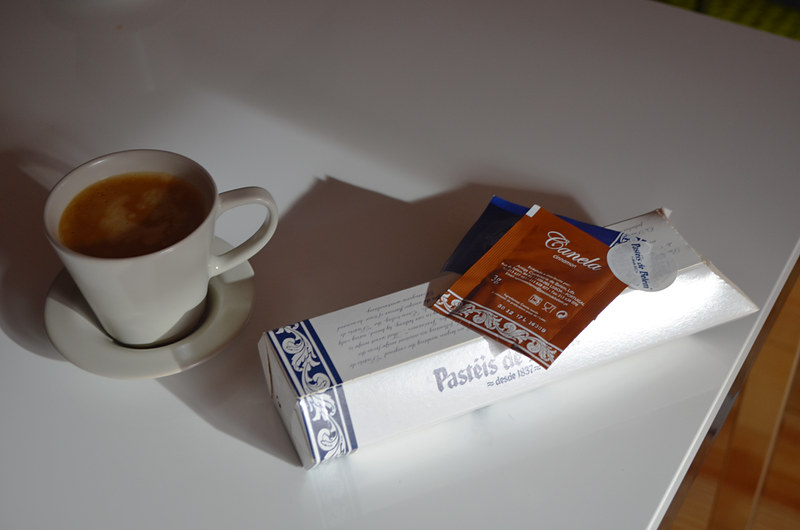 Lunch
Our choice of lunch venue was more a case of pick a place where it looked as though we might be able to squeeze in than anything else. Honorato Hamburgueres Artesanais (next to Casa Pasteis) was busy, but looked favourite for actually getting some food. In theory the idea was good. You pick which artisan burger you fancy (a good, imaginative selection priced at around €7 each with French fries), place your order, are given a flying saucer, find a seat if you’re eating in and wait until your flying saucer beeps at you.

In practice it didn’t work out quite so smoothly. There were more people waiting then there were seats (thanks to a toddler’s birthday group which were lingering long after their burgers had been consumed) and it took an eternity for the burgers to be put together. A fast food joint behaving like a slow food joint. The burgers were very good though, which redeemed the place.  However, the time spent waiting meant we only had time to buy some Pasteis de Belém before heading back to Bairro Alto. 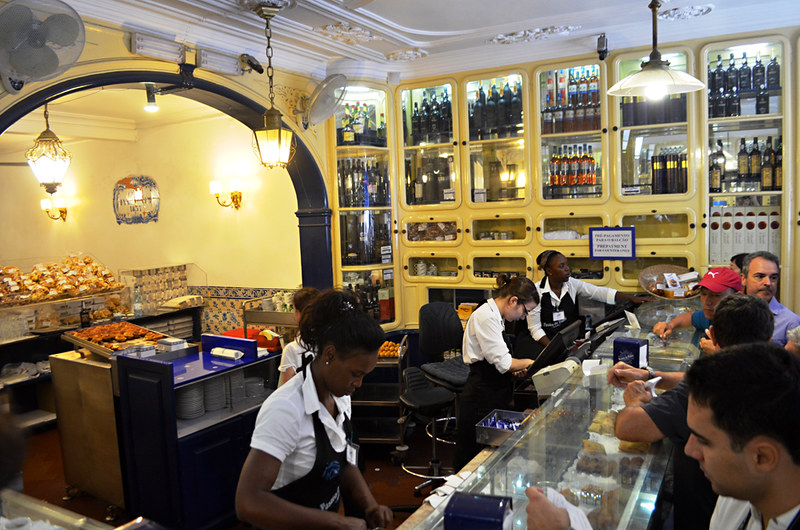 Pasteis de Belém
Everybody that writes about Lisbon mentions Pasteis de Belém so who am I to buck that trend? Picking up some Pasteis de Belém in the shop where they were created way back in 1837 is something that just had to be done… even if it meant standing in another queue. They’re quite simple little pastries, concocted by a baker from the nearby Mosteiro dos Jerónimos out of necessity to earn an income when Portugal closed all convents and monasteries in the 1800s. The ones from Casa Pasteis are said to be the only true Pasteis de Belém in Lisbon. Getting hold of them is more complicated than you’d imagine and involves queueing to get a ticket, using said ticket to place an order (another queue) and then queueing again to get your goodies. The simple, creamy, custardy,  puff pastry tarts are tasty enough, but not three queues worth of tastiness.

A day wasn’t really enough to experience Belém properly. We hadn’t been actually inside the Mosteiro dos Jerónimos and there were other museums we just didn’t have time to fit in. Apart from its obvious historical attractions, it’s an extremely nice area to hang out in and Sunday isn’t such a bad day to visit as it’s got such a good vibe away from the tourist hot spots.

Monday is a different story. Avoid visiting on Monday like the plague – most attractions are closed.