Sunday on El Hierro
Appropriately, a more leisurely day. We breakfast at the Parador and drive to our final hotel in a hamlet on a hill, El Mocanal. The road from Las Playas passes one of our favourite sculptures in the Canary Islands, a Lothario looking out to sea. Usually it’s women searching the horizon for the return of loved ones. Not on El Hierro.

Outside of Valverde is another arty and rather surreal creation – huge white heads made from recycled materials which commemorate the Bajada de la Virgen, El Hierro’s most famous fiesta which takes place every four years. 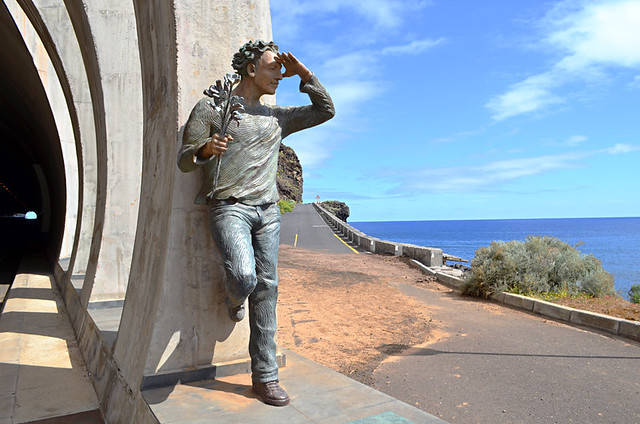 El Mocanal is virtually closed when we arrive. There’s nowhere to buy water and stocks are running low. We hope there’s a bar at Las Calcosas where we’re planning to walk to. Thankfully, after a searing Saturday, there’s cloud cover for our downward route to the coast. Although it’s still a decent descent (500 metres over 3km), it’s nothing like as challenging as the previous day. The route is a former merchants’ trail, passing through fig orchards and spiky clumps of prickly pear before it emerges above the strange little settlement of Las Calcosas. With its slate coloured buildings and their thatched roofs, it’s more shanty town than modern Canarian coastal village. It was devoid of people when we last visited. This timer, in summer, it’s alive and full of people enjoying the coolness of its lava sea pools. 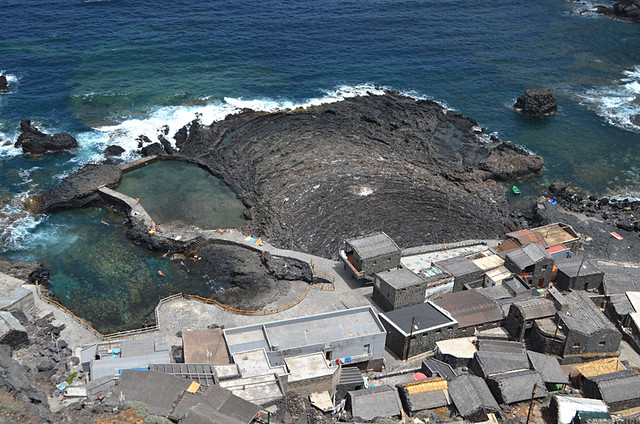 The sun sadistically decides to come out for our climb back to El Mocanal. Luckily there was a bar at Las Calcosas so at least we’ve got water. But by the time we reach El Mocanal a beer would go down very nicely. But everywhere is closed. We know there’s no point in heading back towards El Golfo – we went down that bar-free road on our last visit. Instead we head towards Valverde and are rewarded with an open tasca within a few kilometres.

“The only open bar on El Hierro,” Andy jokes as we step through the door.

“Si, es verdad,” laughs the only other patron. Maybe it wasn’t a joke after all. Who cares, having access to a glass of icy, amber liquid is all that matters. 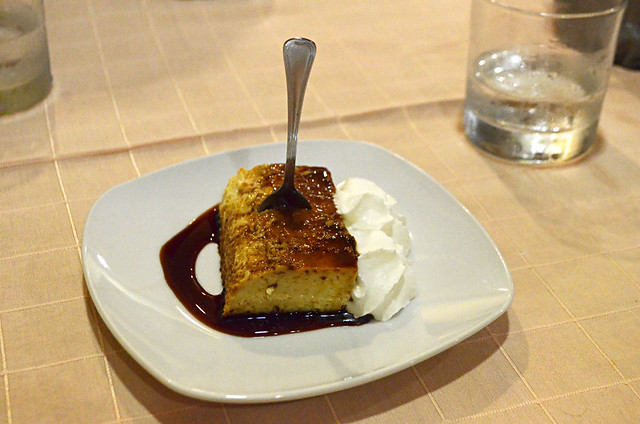 The one restaurant in the village opens for dinner. It’s good, hearty local fare. Portions are big and the menu quite diverse with some unusual choices like papas locas (crazy chips) with chicken as a starter. When the delightful waitress reads out the dessert menu, I just know what the speciality is going to be, leche asada. Andy almost splutters when I order it… again. It appeals the most. As it turns out it’s the best leche asada of the weekend.

Sunday after dark entertainment in El Mocanal involves us sitting with a bottle of wine on our room’s huge terrace. At one point an owl lands on the terrace wall not far from where we sit. It sits there quite happily for ages despite our chatter. We’re honoured. 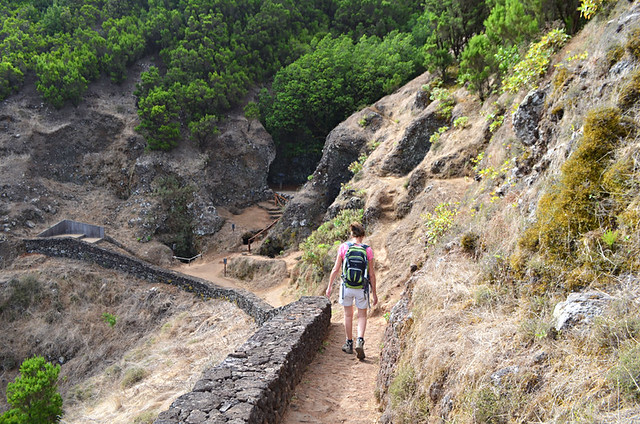 Monday on El Hierro
We manage, just, to squeeze in a visit to El Hierro’s ‘Holy’ tree, the Garoé. It’s a longer walk than we expect and we’ve only time to snap a couple of photos before heading back. The magic tree was said to have been able to produce enough water to keep every single islander’s thirst sated. The Garoé isn’t the original. It was blown down during a hurricane in 1610. But they’ve done a good job with the replacement. It sits shielded in the rocks overlooking a lush, quiet valley. There’s something mystical about the place, it has a calming aura.

We’ve time to fit in lunch before catching our flight back to Tenerife. Tamaduste near the airport has an attractive little bay and a couple of restaurants, bizarrely not actually overlooking the sea. It has a feel of a place where Canarios spend their summers in apartments. We move on to La Caleta, also near the airport. It’s got an even more attractive promenade with sea pools and sun decks. It’s buzzing (for El Hierro) with sunbathers and people learning to swim. Yet again there’s no restaurant actually overlooking the prom. The sun is hot and time is ticking away. We decide to lunch at the airport. 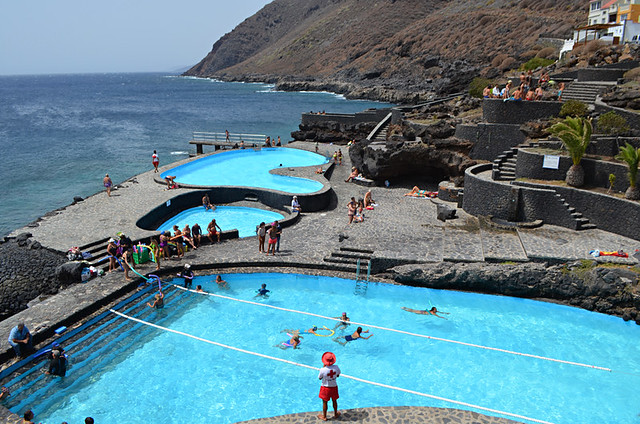 The airport restaurant is actually quite nice, with views over the runway and up the hillside. It’s also air conditioned. They serve tapas and main meals, there’s even a menu del día. And it’s packed. Apart from airport workers having their lunch there are a handful of mature local people clearly there for the menu del día.

How bizarre, people actually go to the airport to eat lunch.

I don’t know why I’m surprised by this. Many of our experiences on El Hierro have shown us a strange little island where things don’t necessarily happen in quite the same way as they do in other places.