While we weren’t exactly rookies when we first climbed Pen y Fan in the Brecon Beacons, neither were we hardened hikers. We made some basic mistakes. 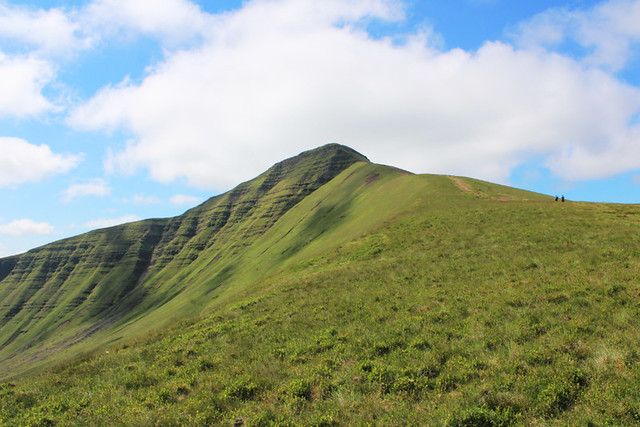 For a start, we underestimated the British weather. Foolhardy I know, but it was a sunny June day when we set off on the long slog to the peak. We had light waterproof jackets, just in case, and lightweight walking trousers. Neither were robust enough to repel the driving, icy raindrops which felt like death by a thousand slashes when they pierced our ineffectual clothing as we battled our way to the summit. By the time we descended from the mountain into non-Arctic conditions, we were sodden, and every extremity was numb to point of being frostbitten.

Jump to another June day two decades later. The upper reaches of Pen y Fan no longer hold any fear, apart from the fact that after months of walking on terrain that would make the Netherlands seem hilly, we aren’t sure our muscles are fully up to the job. But we have thicker jackets, more appropriate trousers, and better boots. This time we’re prepared for the ‘Top Spot’. 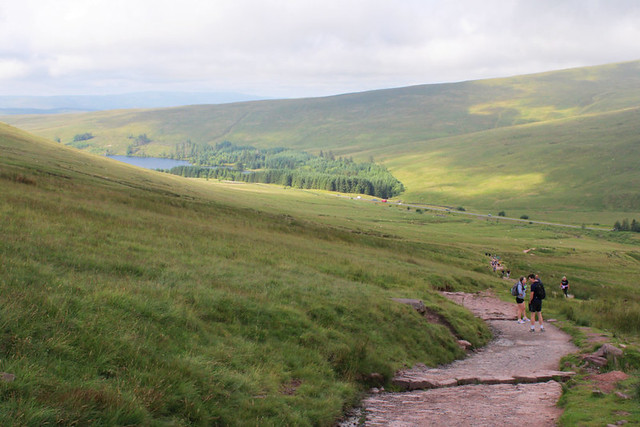 Being one of the best-known walking routes in the Brecon Beacons, combined with many Brits newly discovered love of their own countryside, we expect hordes to join us on the route to the top. The bus from Brecon is surprising empty. The only other passengers are a doddery-looking man with big shorts and skinny legs, and a quartet of young girls with backpacks; most people drive to the start of the route.
When we arrive at Storey Arms, the girls stay on the bus, the doddery man dodders off, looking very fragile … until he strides confidently in the opposite direction from the route to the summit. Although there are a few people around, the early bus gets us there ahead of the crowds. We lose more walkers when we head along the road to the alternative start at Pont ar Daf. A family take to the path ahead of us, as do four girls who are decently kitted out for the task. The family aren’t. About 200m behind us are a couple dressed, like us, in full hiking gear.

Despite occasionally used for Special Forces training, Pen y Fan isn’t as big a beast as some we’ve tackled. But a 500m ascent and 800m descent isn’t to be sniffed at. We set off at a slow and steady pace, letting our hibernating muscles adjust to being drafted back into service. The four girls pull further ahead, the other middle-aged hiking couple quickly overtake us and, in front of us, the family’s two teenage children disappear into a swirling mist which blankets the landscape as we ascend. Jackets are zipped up, hats are pulled down over ears, and hands are slipped into gloves. Pen y Fan’s cool embrace won’t chill us to the bone this time. 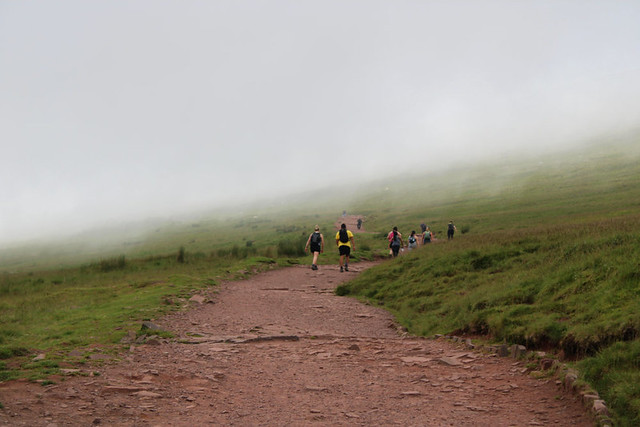 The teenagers’ parents are the first casualties. It was clear from the start the mother wasn’t prepared for the gradient. Their offspring continue ahead, abandoning them to the fates. One of the four girls looks as though she has experienced this sort of terrain previously. She drives her friends onwards and upwards, allowing regular rests. We almost pass them a few times, but whenever we draw level, she eggs them on again. The pace set by the male half of the middle-aged couple is too much for the woman; she looks flustered and red-faced as we draw level. The man, presumably her husband, is nowhere to be seen. He’s left her behind … the prick.

A couple of hundred metres before we arrive at the ridge, we catch up with the pair of weary-looking teenagers, and then the four girls, three of whom have mutinied and lie flat out on the grass beside the path. When it comes to hiking, knowing the pace which suits you is massively important. We often find ourselves in tortoise/hare scenarios. 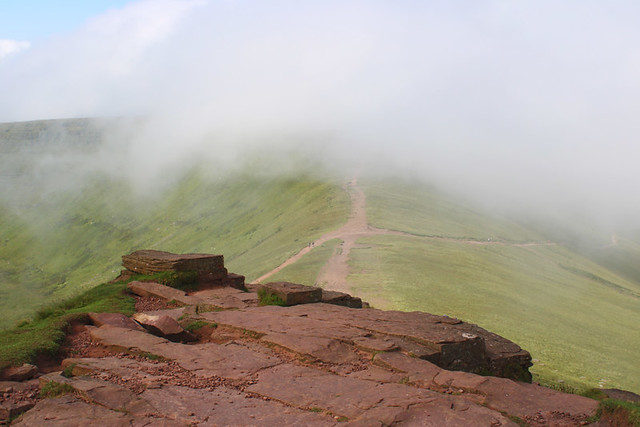 The views from the ridge should be divine, but the cloud has robbed us of the experience. We even struggle to see the route to Corn Du. Given the evenness of the path so far, the final few metres to Corn Du is surprisingly scrabbly. From there it’s an easy stroll to the peak of Pen y Fan where we find only two other walkers literally hugging the cairn at the summit. Even though we’re in a shroud, we take the obligatory photos before starting our descent. 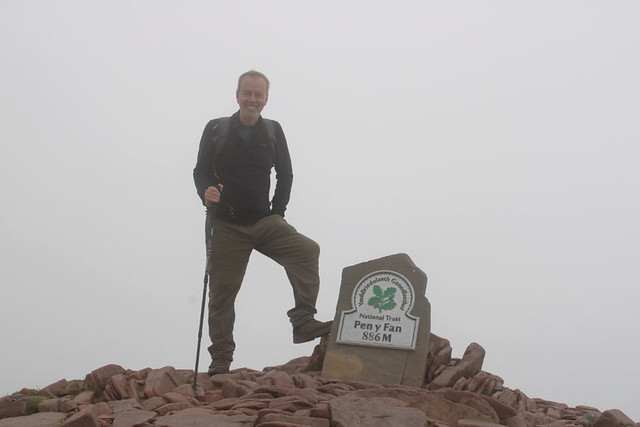 Initially, the path seems steep, disappearing unnervingly into fog below our feet. It’s just an illusion. After 50m, it calms down and evens out onto a wide ridge. Almost immediately, the cloud dissipates and we’re treated to sun-kissed views of ancient slopes which curve like a verdant punch bowl below Pen y Fan; views we have all to ourselves as nobody else has followed us. 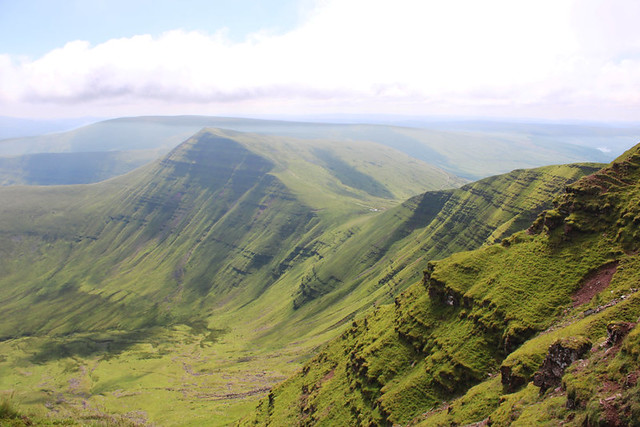 Having conquered the mountain, we take our time strolling back to Brecon, pausing regularly to bask in the glorious Brecon Beacons’ scenery. The weather gods had tested us again, but this time we’d passed, and now they’re not only smiling on us, they’re beaming. If anything, it’s too hot.

We meet only a handful of sweaty hikers heading upwards; the experienced ones in the initial stages, the absolute beginners later in the afternoon. These are the hatless ones with inappropriate clothing and no water supplies; the ones who have attempted to begin to climb the highest mountain in southern Britain during early afternoon on an unseasonably hot day. 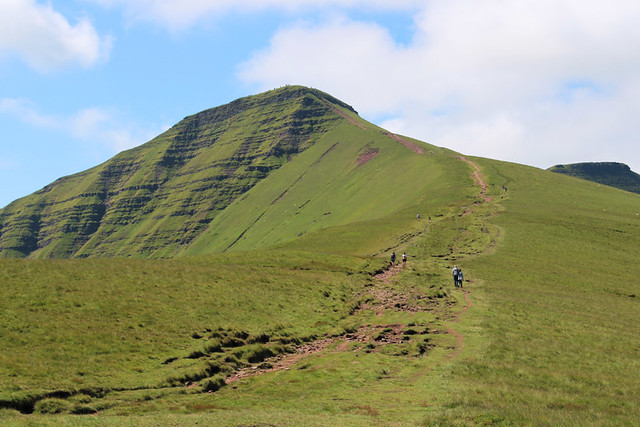 After a 600m descent over 4km, and as we draw close to the car park where the northern ascent begins, we encounter a couple who look as though they’re dressed for a Saturday night out in Costa Adeje on Tenerife.

“Are we near the top yet?” the beetroot-faced man asks, as his wife treats clumps of grass as though they’re challenging obstacles.

Some people really shouldn’t be allowed out in the countryside on their own.