Descending from the perfect crater rim of Gairía volcano and traversing the rough fields of Malpaís Chico, we emerge onto a ridge. To our right lie the scattered white, single storey houses of the hamlet of Tiscamanita and to our left, the bruised mountains of Montaña de la Goma, Morro de los Halcones and Agudo brood. Ahead of us, emblazoned on our retinas in the intense midday sun, is the beautiful and mesmerizing sight of hundreds of thousands of Lily of the Desert plants in full bloom. 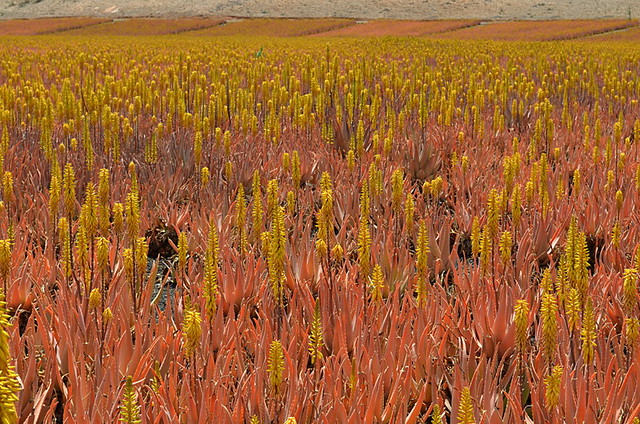 These are the interminable fields of Barbadensis Miller Aloe Vera plants which fill the horizon, their slender yellow flower spikes rippling in the breeze atop a red sea of razor-sharp, bulbous tentacles.

Better suited to Fuerteventura’s arid and sun drenched climate than almost anywhere else on the planet, the clear gel from the leaves provides the island’s liquid gold, containing a powerful amalgam of vitamins, enzymes, minerals and essential oils which have gained the little lily its many nomenclatures. The Ancient Egyptians knew Aloe Vera as ‘the plant of immortality’, using it to preserve their beauty; Hindus knew it as ‘the silent healer’; and when Christopher Columbus set sail to adventure beyond the edge of the known world, or El Hierro as it’s better known today, he stocked up his ships with supplies of Aloe Vera which he called ‘doctor in a pot’, knowing it would protect his sailors from the ravages of scurvy. 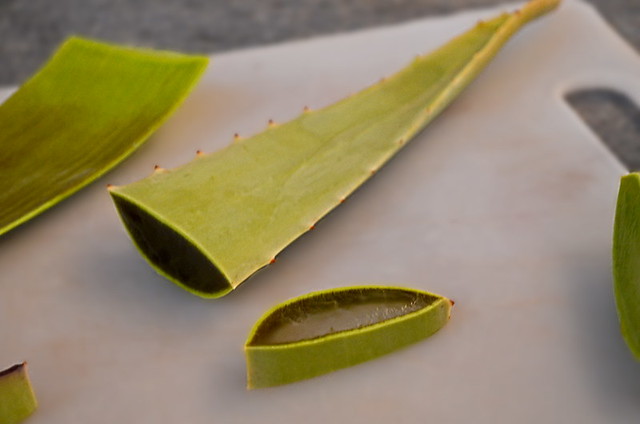 Grown ‘cresco secco’ on Fuerteventura which means with plenty of sunlight and very little water in order to produce the highest concentration of minerals in the leaves, the plants are allowed to grow slowly and don’t begin to store the precious gel until they are three years old. The older the leaves, the greater the concentration of gel. For this reason, only a few, four year old leaves are picked from each plant annually, leaving the rest of the plant to continue to mature. 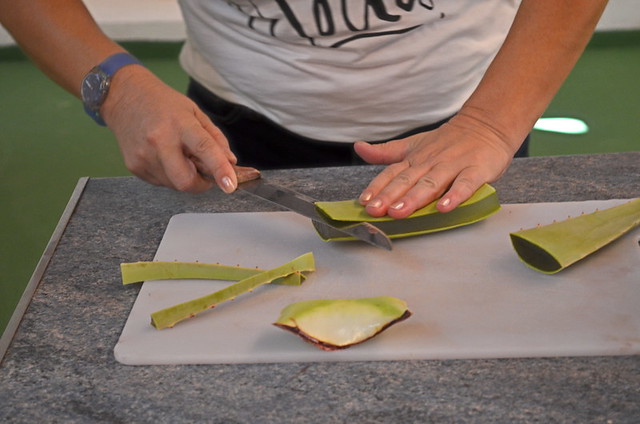 Rapidly growing more important in terms of the island’s GDP so that now its importance to the economy is on a par with that of tomatoes, Fuerteventura’s Aloe Vera is considered some of the best quality in the world and you can visit Aloe Vera farms on the island to find out more about its extraordinary health and beauty properties and to buy products at source. You’ll also find Aloe Vera products for sale all over the island.

But best of all, get off the tourist trail and stride out through Fuerteventura’s amazing landscapes. As you uncover tiny churches hidden in ancient ravines and tread the red earth that lies beneath the gaze of windmills and volcanoes, you just might stumble across endless fields of its Desert Lily in bloom, a real sight for sore eyes (for which no doubt there’s an effective Aloe Vera product). 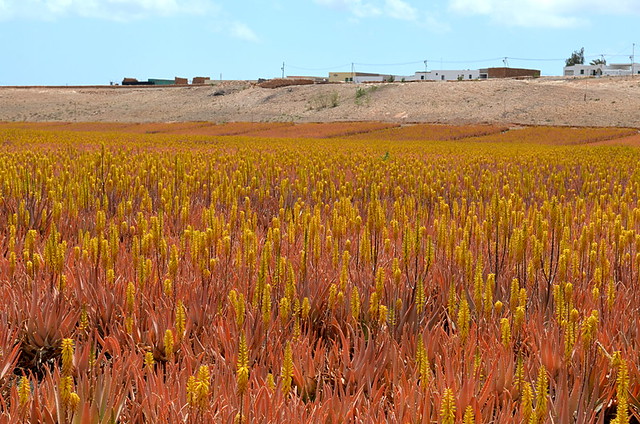