Fuzzy daylight gently prises open the eyes around 7am; fuzzy daylight, a distant cockerel and a sing-song chorus from birds I have yet to identify.

Coffee and a bowl of fruit (bananas from Madeira, mango and pineapple from former Portuguese colonies, local cherries which are just at the end of their season) are eaten on the back terrace in the company of two black cats who look as sleepy as we do – stretching and yawning in the patches of thirsty grass which will first welcome the sun as it clears the cottage’s orange tiles. 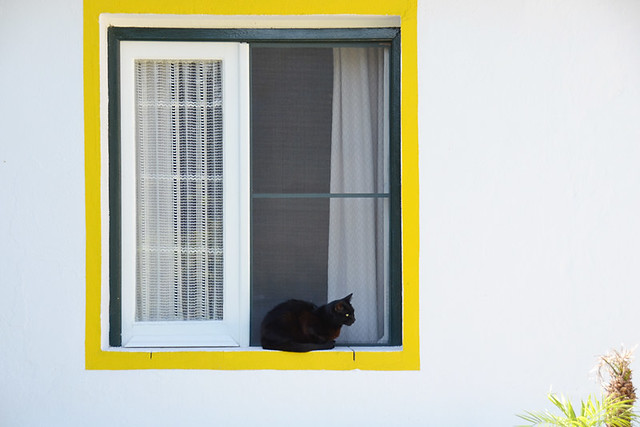 Around us the world is waking up in an Old MacDonald sort of way. More cockerels add their croaky voices, sounding as though they’ve got through a pack of cigarettes during the hours of darkness, whilst a herd of dwarf goats in an adjacent field bleat with Disney-character cuteness as they skip their way to breakfast. In the mini pine forest which cloaks us, adding a touch of wilderness to the scenery, a diverse cast of feathered friends enjoy the early morning freshness. Loudest are the Eurasian jays whose calls range from grating squawks to haunting whistles a la Hunger Games. Equally lyrical is the song of the colourful bee-eaters as they pass over, scouring the land for bees presumably. A couple of days ago I saw a bright yellow bird with black wings. When I was young I used the Observer’s Bird of Books for identification; this bird I recognised from a wine bottle label. It was a papa-figo (golden oriele). 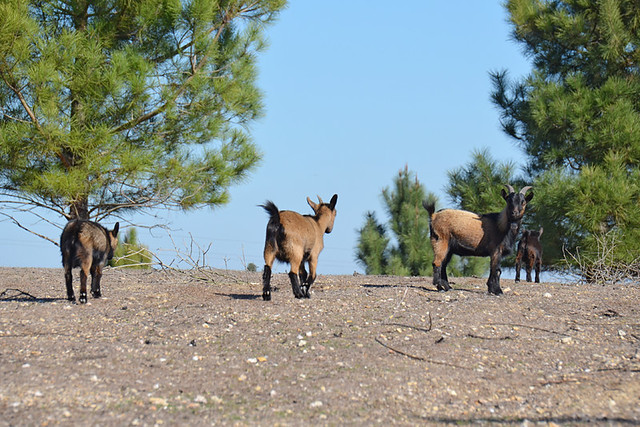 Depending on how many distractions there are, work tends to start at 8.30am. We sit at our desks and, after a check around the world of social media and emails, start composing. We’re both at our most creative in the morning, which is handy as misaligned creativity wouldn’t work when there’s only two of you occupying a small space. We prioritise various commissions according to deadlines; juggling a few different writing projects as well as the plate-spinning maintenance of our own websites.

Around 10.30am Dona C will amble past the window with a “Bom dia, tudo bem?” and we’ll lean on the frame to exchange a few words (literally as our Portuguese is limited) about the weather and natureza (ant invasions, rogue wasps, the outrageous behaviour of Rikki – the dominant moggy who terrorises the quinta’s other cats). 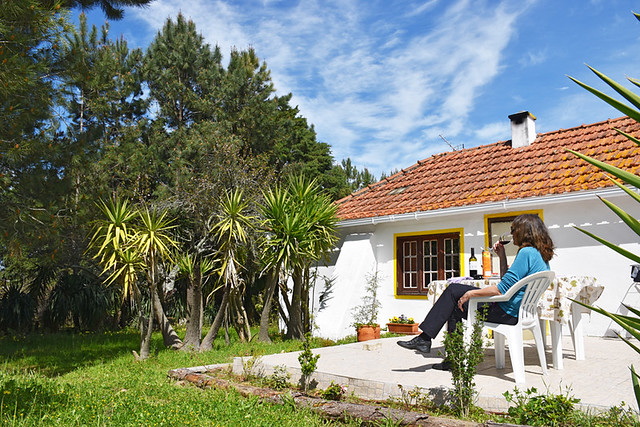 We break for lunch at around 1.30pm, taking a bowl of homemade gazpacho and a plate of presunto (cured ham) to the back terrace to sit under the protective shade of an umbrella as the sun is fierce at this time of year. There’s not much going on – the air is still, the world is silent, the quinta’s sheep are hogging shade somewhere, the birds are absent apart from a brace of hoopoes who seem to prefer the heat of the middle of the day. They’re easy to spot amidst the pines, their distinctive quiffs jerking up an down as they beak the ground.

By 2pm we’re back at our desks, creativity will only last another hour. After that it’s tasks which don’t require as much imagination – answering emails, comments, having Skype meetings, keeping admin up to date, photo prep, preparing invoices etc. Progress is slow currently thanks to a dodgy internet signal – we’re averaging 15kbs instead of 40mbs, so this involves time-eating phone calls to NOS, the Portuguese company which everyone around us seems to use… and moan about. Their customer service is extremely nice and try to be helpful, but the internet signal hasn’t improved yet. 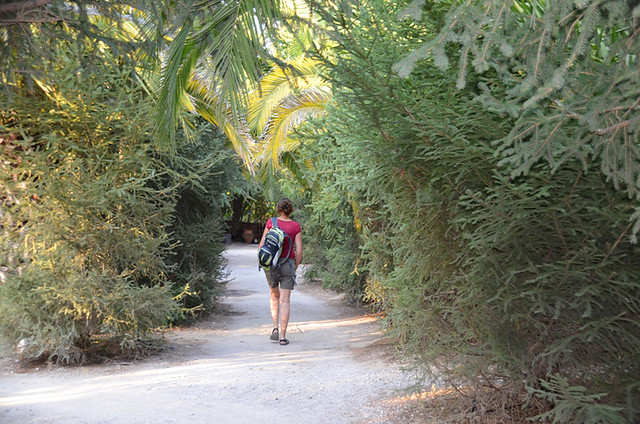 Normally we’ll work through to 6pm, broken by coffee mid-afternoon, but around 4pm we realise our drinking water supplies are low and head to the aldea (village) a few minutes away. There’s a 50m drive through a palm-lined track from where we park the car to the quinta’s gates. For a few hundred metres more we drive along a one-lane dirt road, passing the dwarf goats, an olive grove, rows of vines, and a duck farm before we arrive at the tarmac road leading to the aldea. It’s not a pretty village, but it does have an honest charm – it’s an agricultural area and everyone has little allotments beside their houses. It also has a grocery store/baker/part-time post office, a chemist, and an excellent restaurant/bar which is the hub of the aldea… when the grocery store is closed. 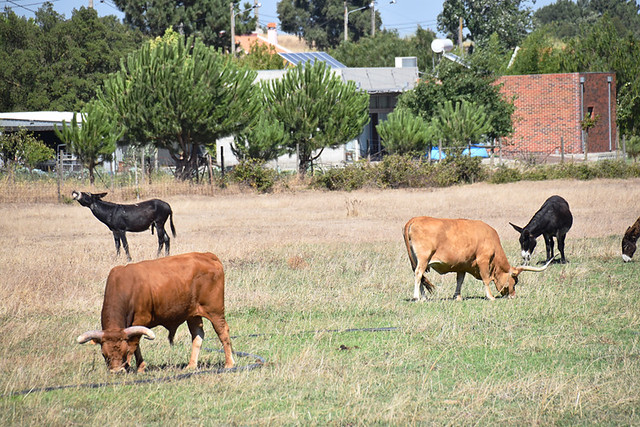 Stocked up with water, we take a circular route back to the quinta which takes us past a field with a motley crew of creatures – camels, deer, donkeys, horses, longhorn cattle and a black Afghan hound. There’s also a huge and beautiful looking traditional mansion surrounded by neat vines. Presumably its an adega, but we’ve yet to research it. What’s on the doorstep gets left till last.

Back at our desks we continue working till 6pm when we stop for half an hour of trying to improve our Portuguese using Duolingo. Then it’s reading time. Since moving to the quinta we’ve rediscovered the joy of books. By this time the sun has dropped just behind the pines meaning the terrace is in dappled shade. It’s a perfect time of day. 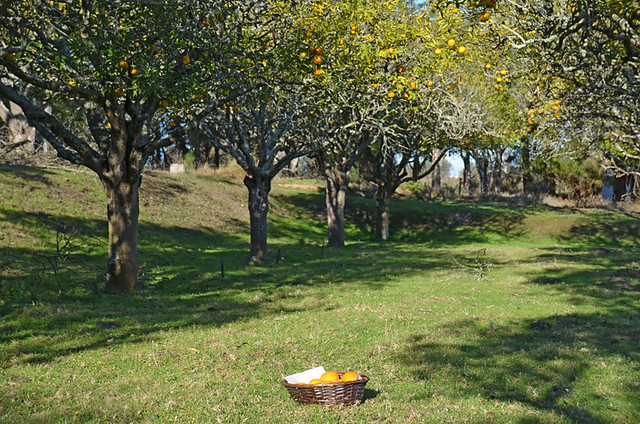 As we devour the pages, the quinta’s sheep chunter away as they tread a circuit which with will take them through the pines into their field, then to the rough car park and onto the field where the washing line is before descending to the orchard and then back to the pines again. Dona C says they do this four times every night before bedding down. After reading time it’s port and tonic time. If we’re short of lemons we’ll just toddle down to the orchard to pick some and then sit and bask in whatever soundtrack the countryside plays for us. 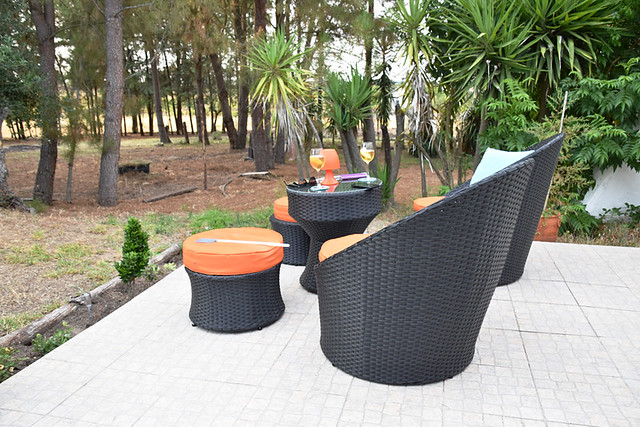 Dinner is also eaten on the back terrace as the world here is a constantly changing canvas. As dusk falls, a peach band borders the hills on the other side of the pines and the day birds grab a few insects before settling themselves down. It’s the time when we’re most likely to see storks, egrets and a large white bird of prey we haven’t identified yet. As the skies darken the night birds come out to play; two types of bat – one the size of sparrows, the other of magpie proportions. During the last couple of evenings they’ve been joined by an owl and a nighthawk which swoops past unnervingly close to our heads, its underwing markings making it seem like a mini Spitfire. Birdlife at the quinta bookends daylight hours. 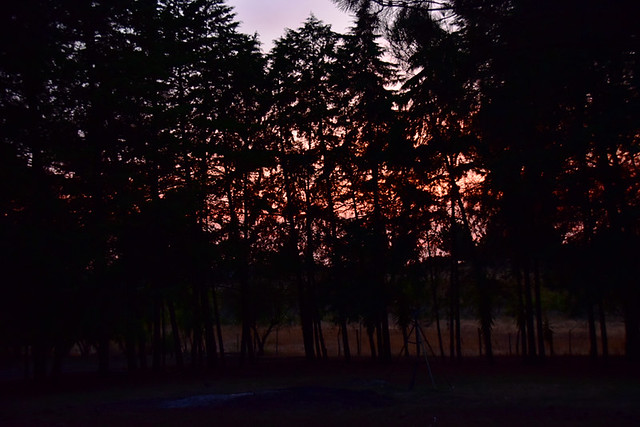 Even though the work pattern doesn’t change when we’re in writing mode, each day is very different.