“I don’t really know why Germany isn’t more popular as a holiday destination with the Brits,” I confess to Tobias as we prepare to leave the gastronomic sanctuary of the Peterle Hotel and head out into the sleet. “Berlin is immensely popular, particularly with younger weekenders.”
“Berlin is not Germany,” Tobias replies.

There’s no sarcasm in his voice, no nod to an ‘in’ joke and no sign that offence has been taken. Tobias just politely states what he considers to be a fact.

I smile, tuck his gifted jar of home made jam into my rucksack and bid him Auf Weidersehen. 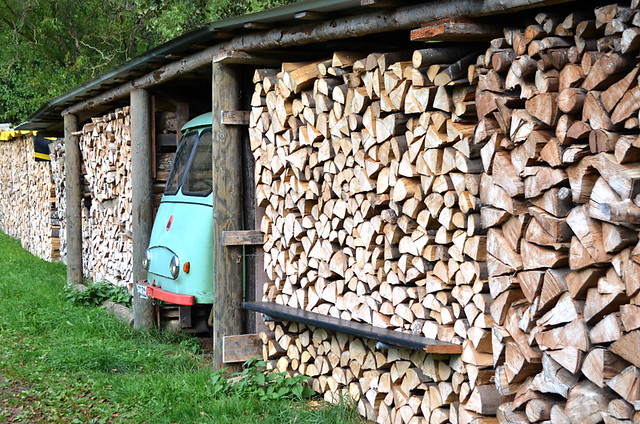 Wandering along through open meadows, the path is bordered at regular intervals by neatly stacked towers of neatly cut logs, their conical ends slotting neatly together like a child’s educational toy. Interspersed between the myriad official walking signposts, hand carved wooden signs point the way, their elegant calligraphic destinations accompanied by simple illustrations. A goat dances his way to a holiday farmstead; a leaping fish is heading for a nearby lake. 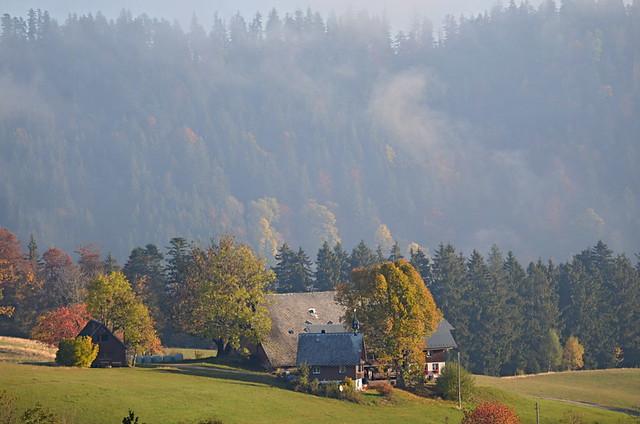 From wooden cottages whose roofs bow low to the ground in defiance of the weight of impending winter’s snow, thin columns of white smoke spiral into the sky, perfuming the air. Out front, ‘Mary, Mary, Quite Contrary’ gardens revel in the return of the sunshine which is now spreading across the landscape, their weed-less beds and manicured lawns concealing the occasional garden gnome sporting a woodcutter’s axe. Above the lawns, a riot of red geraniums spill from wooden boxes adorning every window. It’s a gentle scene, a scene straight from a child’s pop-up book. It’s almost a cliché.

I begin to wonder if there isn’t some kind of stereotypical chicken and egg thing going on here. Are the homes and gardens deliberately designed to bring fairytale images to mind, or did the fairytale images simply reflect the reality of the landscape? Even the meadows are symmetrically cut and scrupulously mowed, forcing the borders of the forest to look like they’ve been drawn using a slide rule.

Watching the farmers at work in their meadows and thinking about what this landscape would look like if you took the human element away, slowly, the realisation dawns on me that this is no attempt to perpetuate a stereotype, this is simply the way people have lived for centuries in this unique environment. 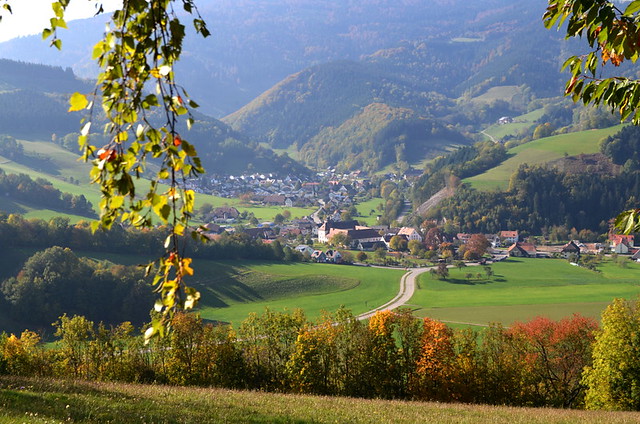 The people who live within the arboraceous embrace of the Black Forest have as much of a role to play in its well being as it does in theirs. The forest provides much of what they need; housing, fuel, signage, decoration, shelter, but they in turn manage its health and regeneration. The endless stacks of neatly cut logs ensure that new saplings can take hold, maintaining the health and diversity of the forest. The meadows that cut a swathe amongst the ever advancing forest help to control its natural invasiveness. Without them, the forest would once again revert to the impenetrable knots that once spread across much of Europe and earned it the name which today is an outrageous misnomer. There’s very little black about the Black Forest. 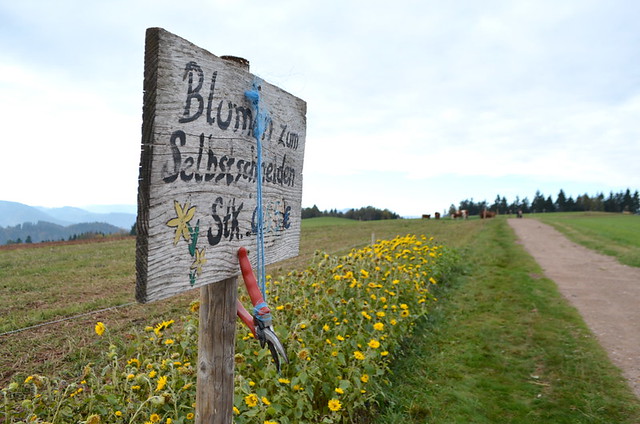 My journey continues alongside a bed of sunflowers bordering a meadow. Their summer grandeur is somewhat faded now but there are still bright, young blooms amongst the bowed heads of their elders. On the path alongside is a post on which a pair of secateurs is hanging and a note inviting people to pick their own and leave the money in the honesty box. I’m in the middle of nowhere and yet here is a money box, not secured or tethered in any way, just sitting here.

Pondering the words of Tobias again, I begin to realise that this Germany is almost the antithesis of every mistaken stereotype I have ever allowed to creep into my head. It seems to me that everything these people do is done with pride and patience, the log cutting; the sign carving; the gardening; the upkeep of their homes and farmsteads. They live in a very beautiful place and they take their duty to maintain and nurture their environment as seriously as they do the safety and nurturing of their children. 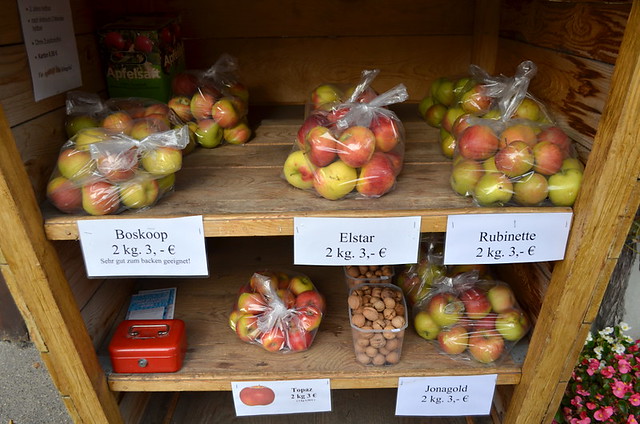 I see polite people who live quiet lives with a gentle humour, people who care for each other and share a collective responsibility for each other and for their environment. I see far more people cycling or walking than driving, a people for whom the prospect of not recycling is incomprehensible. I see luggage left unattended and untouched on a platform until its owner is ready to board the train; teenage boys voluntarily holding doors open for elderly women and helping them with their bags; and honesty boxes inviting folks to cut their own sunflowers or take a bag of crimson apples, or chestnuts, or a jar of home made jam. Every person I have passed on my journey has bid me good day with a wide smile and an unspoken, shared respect for a fellow walker.

I have not yet been to Berlin so I have no idea if it is Germany or not but I know that this Germany is a gentle and beautiful land and one I would return to in a heartbeat.

And I can’t understand why it isn’t more popular with the Brits.