It’s 10C outside, a misty December morn forty or so kilometres south of Lisbon. That might not sound too cold depending on which part of the hemisphere you’re in. But inside a house with no central heating it’s pretty fresh I can tell you. I can spell out the temps in the steam billowing in gentle clouds from my mouth.

By lunchtime we’ll be eating in warm sunshine, ironically taking our jumpers off when we step outside. But early morning it’s positively nippy. So much so that we’ve resorted to having porridge for breakfast a couple of times a week; porridge sweetened by the addition of a handful of raspberries, blackberries, blueberries, cinnamon, and honey. It’s not the proper way (i.e. salted) but I’m happy to risk having my Scottishness revoked by making a sassenach version of one of my country’s famous dishes. 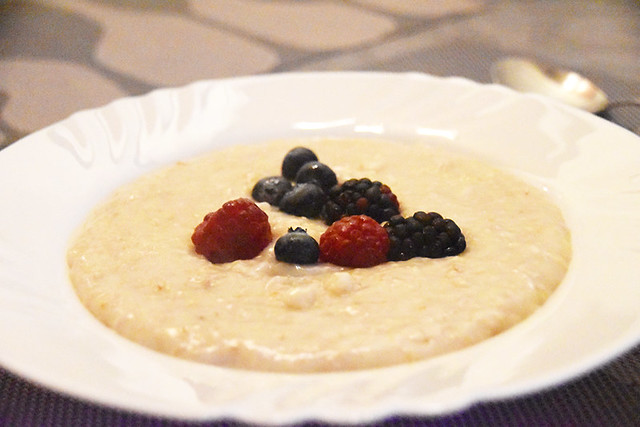 We don’t eat a lot of cooked breakfasts (now) apart from a weekend treat of warm croissants, a bijou version of a trad British breakfast, or boiled eggs with soldiers and marmalade. On a trip to Yorkshire last week I managed a bacon buttie one day and two thirds of a sausage sandwich before reverting to muesli and a croissant for our final two days.

However, on a road trip around Scotland in September we both dived head first into the cooked breakfast dark side. The use of local produce made it impossible to just say no. 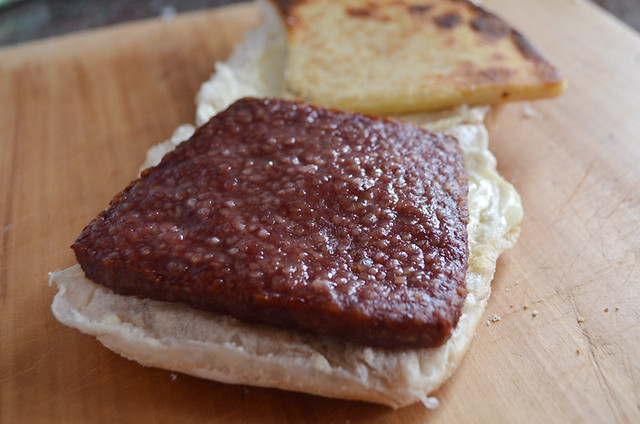 Square slice sausage on Bute
Also known as Lorne sausage, this is a square, well spiced pattie made from beef which fits perfectly into a roll. It has to be the right roll, not those cotton woolly pretenders, or any gum shredders. I’ve yet to find ones which match it as well as the rolls from the Electric Bakery in Rothesay. Served with lashings of brown sauce or ketchup it’s a sinful sandwich which leaves a greasy trail across the chin. I limited myself to one Lorne sausage roll at my Mum’s house before we set off on our journey around Scotland. This was the amuse bouche, a warm up for heartier breakfast challenges ahead. 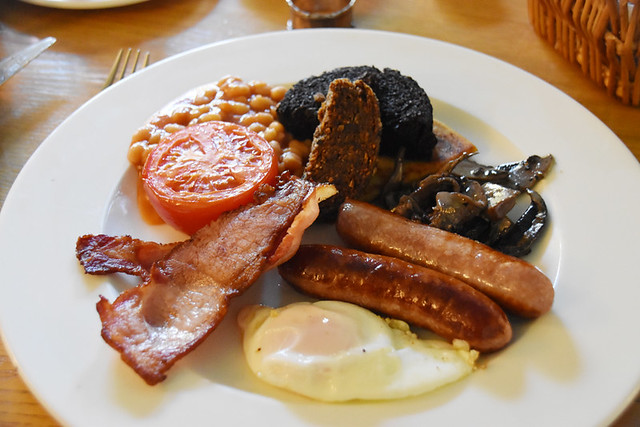 The full Scottish breakfast in Thorn hill
The breakfast menu at the Trigony House Hotel included locally smoked and Galloway smoked salmon. But I was primed for their classic full Scottish breakfast featuring locally smoked bacon, pork sausage, haggis, black pudding, field mushrooms, vine tomatoes, baked beans, tattie scones and local free range eggs. People may sneer down noses at a full British brekkie, but it is the business, and a real treat when only attempted on an irregular basis. 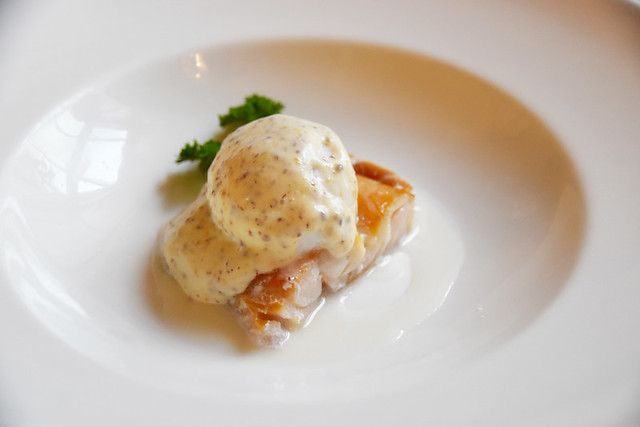 Peat smoked haddock in Sanquhar
Full British breakfasts can occasionally be used as an indicator of holiday destination naffness in travel articles, and often rightly so. But contemporary Scottish breakfasts can be elegant, sophisticated, and full of fresh-produce goodness whilst still satisfying that ‘I fancy a cooked breakfast’ yen. The ‘alternative’ breakfast menu at the Blackaddie included a delicious example – natural peat smoked haddock topped with a poached Glenken’s free range egg. Michelin standard breakfasting. 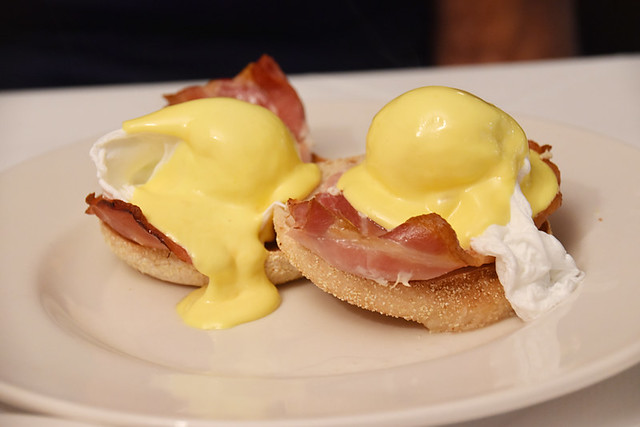 Eggs Benedict in Crianlarich
Eggs Benedict are another attractive yet not overwhelming way to enjoy a cooked breakfast. It might be a dish we can thank our American cousins for but it suits the Scottish palate perfectly. It’s one of our favourite hot breakfasts, subsequently we ate variations a handful of times on our Scottish voyage. The vibrancy of the hollandaise sauce on the eggs Benedict at the Best Western Crianlarich might have had the potential to fry the eyes, but it was a decent version which set us up nicely for walking a section of the West Highland Way. 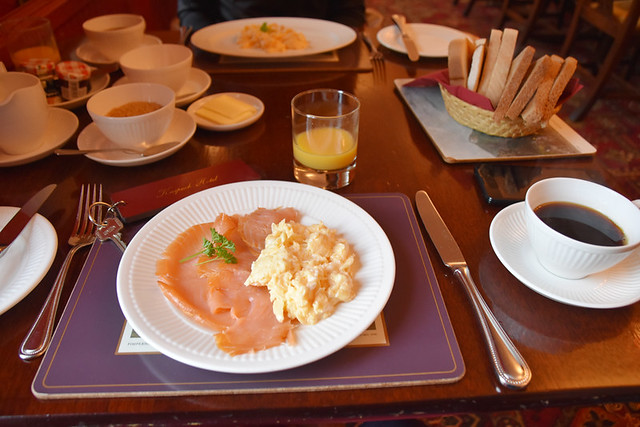 Smoked salmon at Loch Feochan
The Knipoch Hotel on the bracken clad banks of Loch Feochan seemed the perfect spot for introducing Scottish salmon to our tick list of Scottish breakfasts, especially as they have their own way of preparing Loch Creran caught salmon. It’s marinated in juniper, rowan, Barbados sugar, herbs and whisky before being smoked for three days. Smoked salmon with lightly scrambled eggs is one of those cooked breakfasts which tastes sinful but feels like a healthy option. 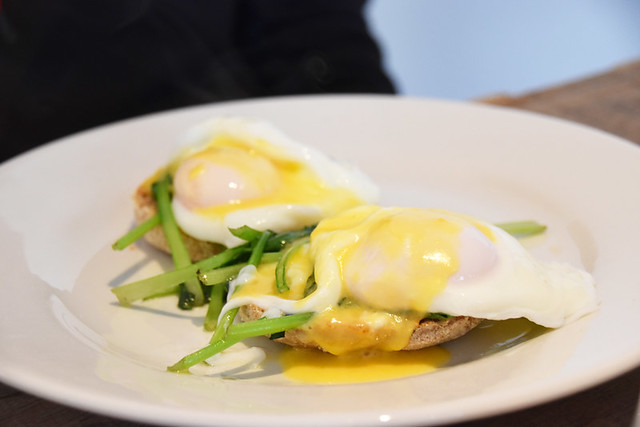 Eggs Florentine on Skye
I adored the chunky, rough wooden slab of our dining table at Hame on Skye. It seemed to add a rustic, sea-bleached flavour to everything served on it, not that their eggs Florentine needed any assistance in the taste department. With spinach substituted for bacon, this is another cooked breakfast which doesn’t have an artery-hardening personality yet neither does it feel as though you’re on a health kick. I’m a spinach fan, so eggs Florentine works beautifully for me, and Hame’s was as fresh as the Skye scenery outside the window. I ruined all the good work by pairing it with a buttery. If you don’t know what that is (I didn’t) Peter Ross described it perfectly in The Guardian – “… like roadkill croissants”. 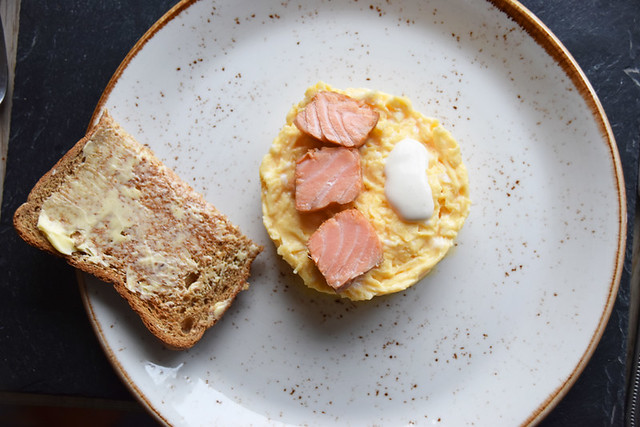 Scrambled egg timbale at St Fillans
For the sake of trying the full gamut of Scottish breakfasts, at the Achray House I really should have ordered a ‘creamy bowl of porridge with heather honey, heather marmalade, or a dash of whisky’. But I saw their smoked salmon and scrambled egg timbale (with a crème fraîche dollop) on another guest’s table at and that was the nail in that porridge coffin. In my defence, it was a completely different beast to the smoked salmon at Loch Feochan, and was also smoked in house. 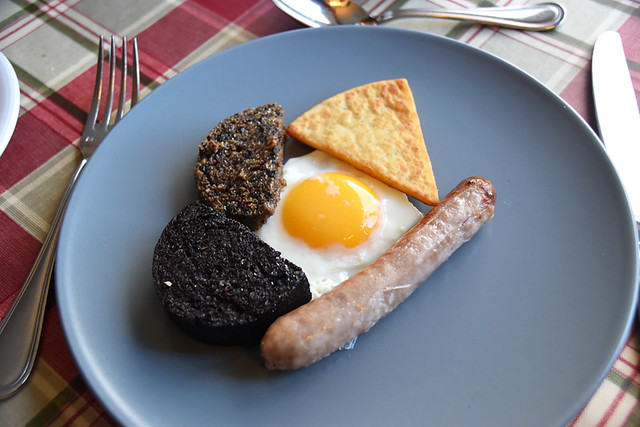 Bookending with a full(ish) breakfast
As it was probably going to be the last chance to enjoy a full Scottish I indulged again at the Four Seasons (also St Fillans) on our final morning. It was a conservative version (with a small c, this is Scotland) which included pork sausage, fried egg, tattie scone, black pudding, and white pudding which looks a bit like an anaemic black pudding and consists of beef suet, bread, spices, and oatmeal. 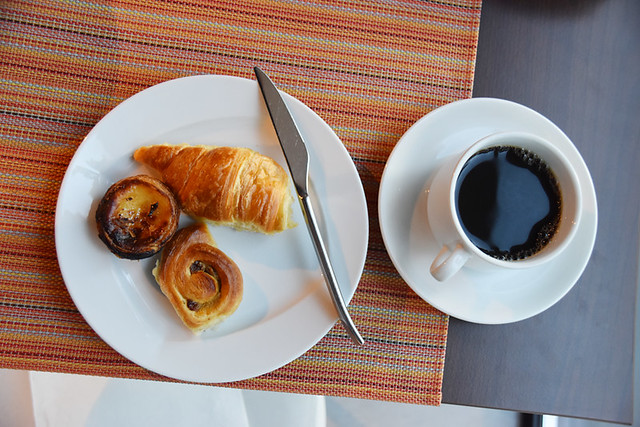 24 hours later and our breakfast plate at the Star Inn beside Lisbon Airport seemed like a poor relation – a small croissant and two pastries, one being the ubiquitous pastel de nata. It was tasty enough but a brekkie lightweight and no match for the hearty swirl of flavours which had birled us around various Caledonian breakfast rooms for the previous fortnight.

The Parador de Cruz de Tejeda was originally built in 1937 and feels as fresh as the pine air that permeates the air around it. It is a perfect design for its natural surroundings… […]