When we’re on location on behalf of Inntravel we often have to devise new walking routes. When you’ve only got a short time in a destination you don’t know, the pressure is on to research what has most potential and then actually walk and map out the route.

This is where local knowledge is priceless. I don’t hold with the oft bandied about notion that the average ‘local’ randomly picked out in the street or who happens to be sitting next to you in an atmospheric tavern is the font of all secret knowledge that no outsider has ever heard before. Not in big towns and cities at least.

In the country it’s different. People know things. They might not be secrets as such, but they know places casual visitors wouldn’t normally stumble across. 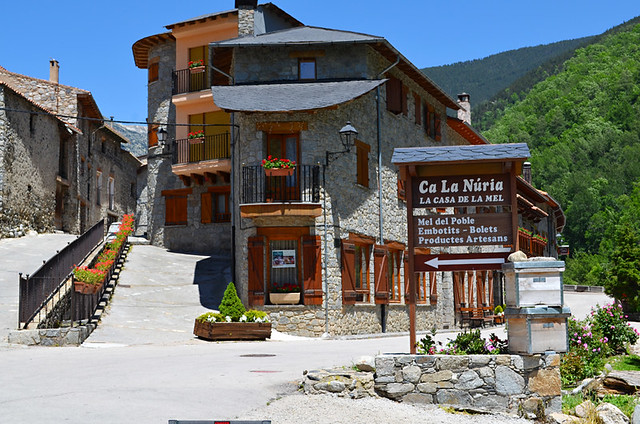 So when Agustin, one of the owners of  the Hotel La Coma in Setcases in the Pyrenees, mentioned a place where there was a waterfall that looked like a Champagne glass (Being Spain he might have said cava, but then Setcases is almost on the French border so maybe not), our ears pricked up like a couple of retrievers who’d heard a rabbit in the undergrowth.

Setcases is biscuit tin pretty; a small village of stone houses with a quasi  Alpine appearance. It sits nestled into a valley, surrounded by woodland and craggy mountains. Any walking trail that involves strolling through Setcases, serenaded by the sound of rushing water coursing through water channels running the length of the village, ticks a few ‘ideal walk’ boxes before you even start.

The first part was on road. Normally that can be a drag, but when it’s a country road through the sort of countryside the Pyrenees boasts it’s no hardship, especially when you’ve got a playful river dancing along beside you. 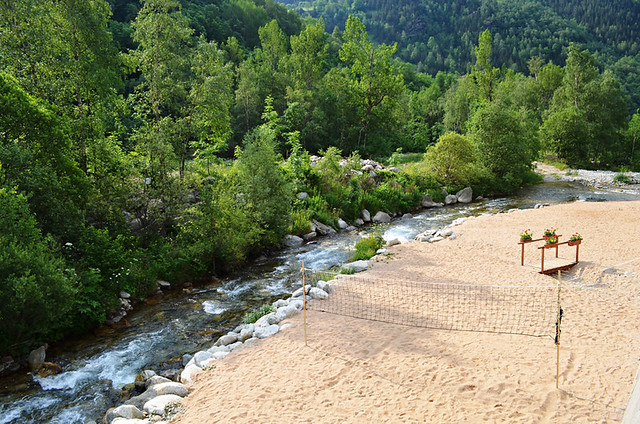 Plus there were quirks to bring on an attack of eyebrow raising. A golden sand riverside beach is strange in itself, the surreal factor raised by the addition of a beach volleyball net and a pointless looking wooden bridge, decorated with window boxes, that connects nowhere with nowhere.

Ahead of us the peaks at Ulldeter looked sullen and threatening. Despite it being mid July, there was still snow in parts and rain seemed never far away. On the upside it meant the river was exuberantly high which in turn bode well for some impressive waterfall action.

Without Agustin’s advice we’d probably never have spotted the turning where we left tarmac to join a damp and musty forest trail. 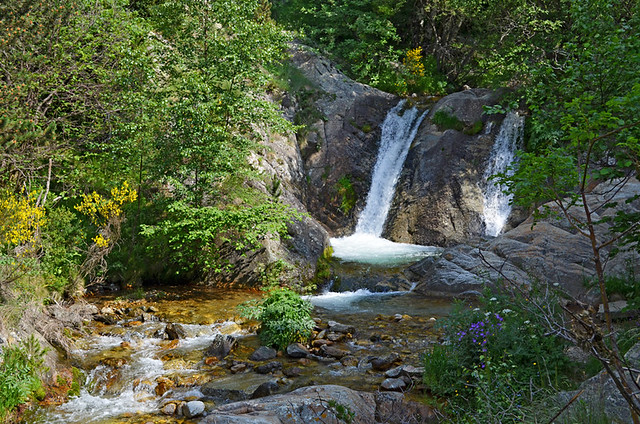 At our side a stream didn’t so much gurgle as roar as we ascended through a fresh, green landscape broken up by a smattering of buttercup yellow and soft lilac wild blooms.

Progress was slow as we submitted to the stream’s hypnotic powers at any feature that looked slightly waterfall-ish.
“Does that look like a Champagne glass to you?” Was a repeated catchphrase, accompanied by eyes being screwed up and the imagination prodded to see if it would concede there was something flute shaped about the cascade before us.

The route followed a trail used in past times by carboners (charcoal makers) until finally we arrived at a bench, a sure sign there was something to see, at Cossi d’en Batlló – the Champagne flute of a waterfall. There was no mistaking its slender outline this time. 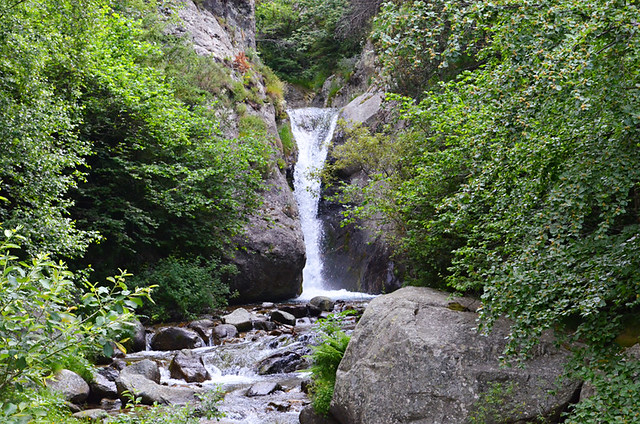 We sat on the bench munching apples, broken up with a bit of photo posing, as we absorbed the frothy falls in the depths of the forest.

It was good, but in all honesty we weren’t quite as wowed as we’d expected to be.

We continued onwards and upwards through dense woodland.

Twenty minutes later, after crossing a springy wooden bridge and passing golden pools, for no real reason we veered off the path to explore a grassy clearing beside the stream.
There was no bench nor sign, but there was another beautiful cascade; this time a chalice shaped one. More coupe than flute, it overflowed with sparkling liquid like one of those champagne glass towers. 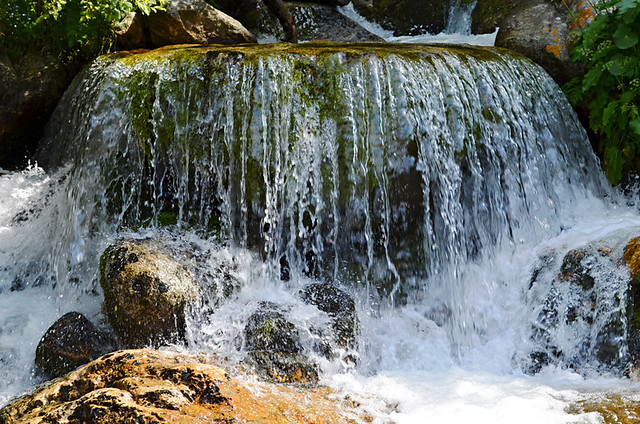 Despite the break a short time before, we took off our rucksacks and plonked ourselves down on the warm sun-kissed grass, intoxicated by the magical forest scene.

Two Champagne waterfalls for the price of one. Perfect, at least it would have been if we’d brought a bottle of bubbly and a couple of real Champagne glasses.