It feels like we’re journeying to the ends of the earth. Everything looks different; from the milky blue water with its twisting water spouts to the bleak but beautiful ruddy mountains rising from the edge of the lake. 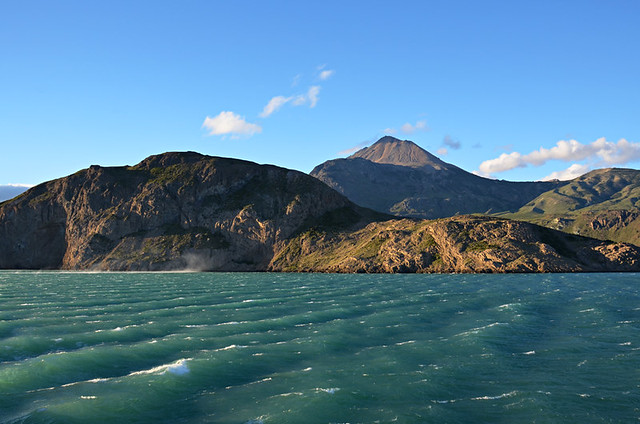 Puerto Ingeniero Ibañez, a ghost of a town with some attractive qualities, such as a wooden boardwalk which snakes along the shoreline, seemed end of the world enough. It only came alive when the small ferry to Chile Chico arrived. Sailing across strange Lago Gral Carrera, the biggest lake in Chile, feels like we’re heading beyond world’s end. At least the ferry is familiar, a slightly bigger version of the ship that was one of my escape routes from the Island of Bute when growing up. 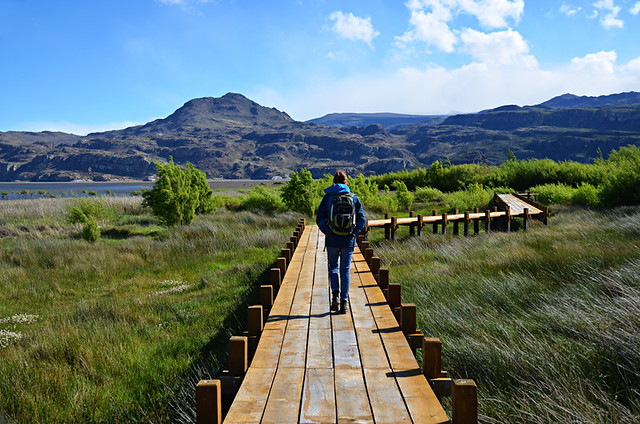 Despite it being a Friday night, Chile Chico is closed for business. We spot one supermarket which hasn’t quite managed to get its shutters down yet and I run inside, dodging a surly assistant to indiscriminately grab some essentials – wine, beer, crisps – before she can throw me out. Tonight we shall dine and drink in our lakeside villa like a lord and lady. 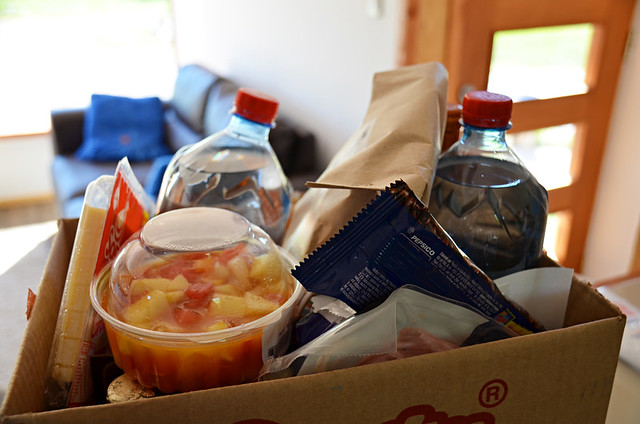 Where Chile Chico is like a frontier town in a dated western, our villa on the edge of the milky lake is 21st century cool; a comfortable, contemporary time capsule.

After a reinvigorating night’s sleep, as we have no real supplies, we walk into Dodge, sorry, Chile Chico for breakfast. It’s 10am and the colourful clapperboard shop fronts look as closed as they did when we arrived. Finally we spot an ‘abierto’ sign at a small café and plonk ourselves at one of only two tables. A surly looking waitress appears.

We look at the people sitting drinking coffee at the other table. 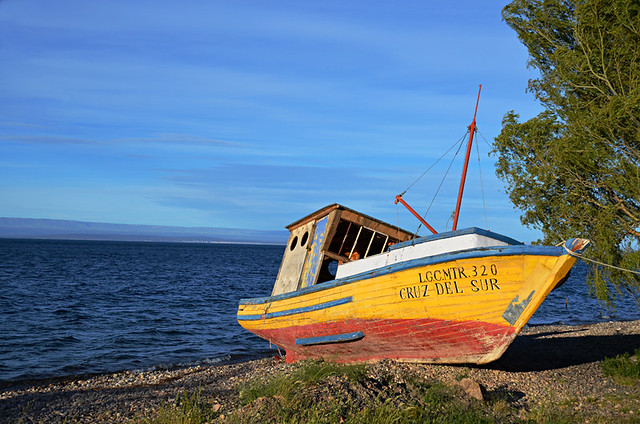 First impressions of the townsfolk is they’re not very friendly, actually they’re downright miserable. Chile Chico lies right on the border with Argentina. Apparently Argentinians cross the border to buy goods which are considerably cheaper on the Chilean side. It’s something which doesn’t go down well. Maybe locals think with our European features and odd Spanish dialogue we’re Argentinians. Maybe once they realise we’re not they’ll be more amenable.

Rather than make the same mistake again we stock up at the supermarket and have breakfast en casa before taking to the surreal countryside outside the surreal town. 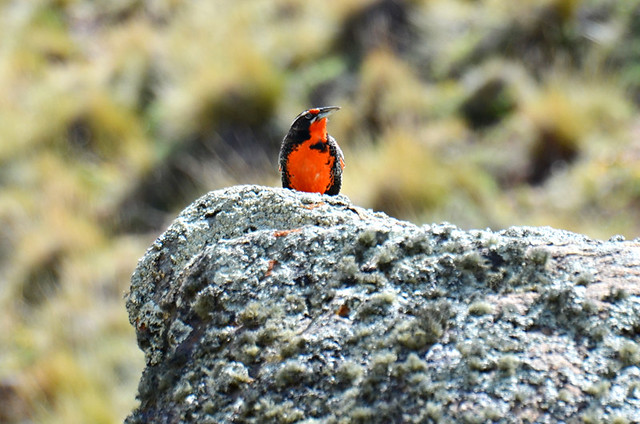 There’s a funny thing about some towns along the Carretera Austral. There tends to be tarmac on the road through the town, but the moment you pass the last building you’re back on an unmade surface. In Chile Chico there’s a huge wooden arch where both town and smooth road end.

To reach our walking route we drive almost to the border and then follow its line inland on a road which becomes increasingly more challenging. It’s a relief to arrive at a small parking area with all four tyres still fully inflated. 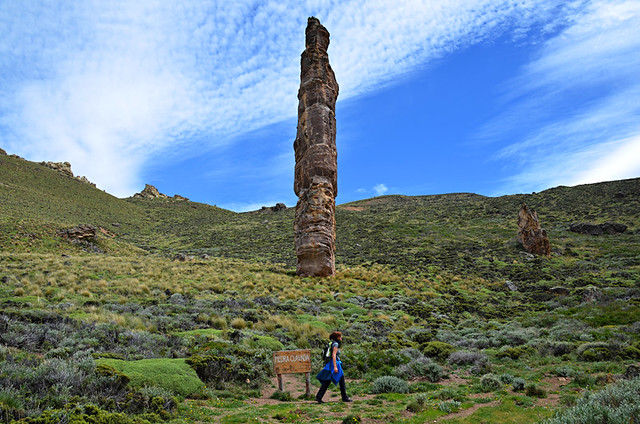 Our path takes us up a narrow valley flanked by stone fingers. A small bird with a striking scarlet breast sings of our passage as we wind up through gnarled crags to a rock totem pole, the Piedra Clavada. From the totem we climb up and over a ridge to reach Cueva de las Manos, a cave with paintings that look as though people have placed their hands flat against the walls and spray painted them. As some of these images are 10,000 years old that seems highly unlikely. 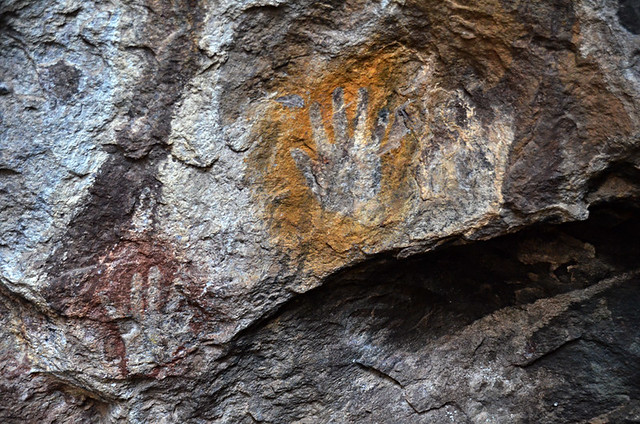 Despite its fame, we are the only visitors to the remote cave. We lunch on cheese sandwiches with a lip-licking lizard for company (lizards the world over crave cheese). From the cave, a path leads along the hillside to the final highlight of the route, the Valle Lunar; a steep valley consisting of mauve, white and yellow rock formations all trying to outdo each other to win the weird rock of the year award. Time it right and condors with plane-sized wingspans rise from the valley directly in front of one of the viewpoints. We see a whole troop of them… from a distance. We’re fifteen minutes too late for the afternoon show. Still, the loopy landscape is reward enough for the trek. The path runs out at the Lunar Valley and we scramble across low tundra hoping the direction we’ve taken is toward the car and not Argentina. We meet up with the path again… about 50m from our pick-up truck. Phew. 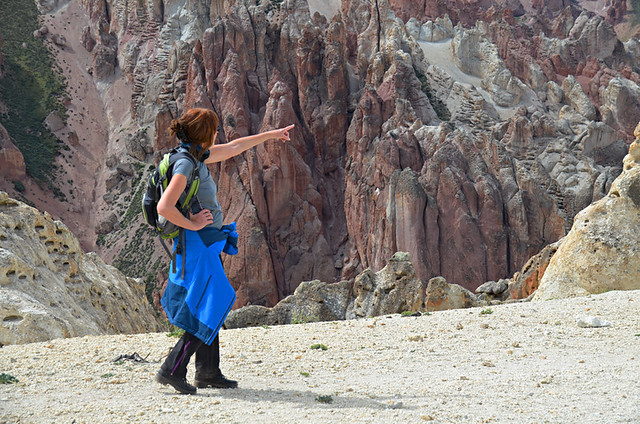 Saturday night in Chile Chico and we put on our glad rags, not really, to hit the town. We spotted a big shed with the word disco on it as we drove off the ferry. If we were proper adventurers we’d be heading there later. We’re not. Playing lucky dip with ‘restaurants’ whose interiors we can’t see and which don’t display menus in their windows is adventurous enough. We pick one overlooking the lake and sit at a table in what could be someone’s front room. Maybe it is someone’s front room. We order steak and chips from a limited menu. The food is basic but good, the wine is quaffable and the waiter, after a gruff start, jokey. Maybe Chile Chico residents are just hard-shelled. Frontier life can’t be easy. 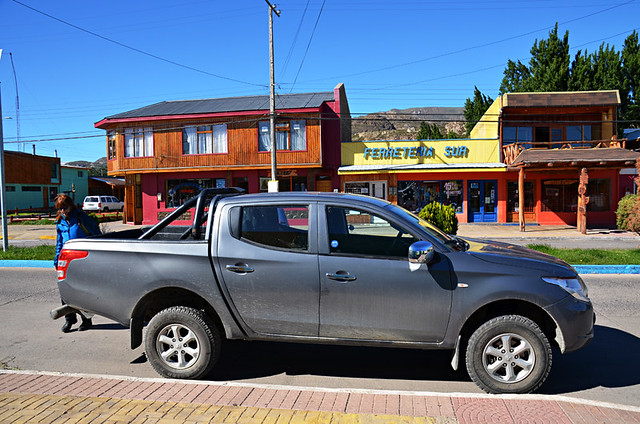 Sunday morning and it’s time to move on. As we drive through the wooden arch on the western edge of town a bulldog of a bald-headed policeman in khakis waves us down. He leans through the window and asks a couple of general questions. Where have we been? Where are we going? His eyes are bloodshot, his breath beery, his words slightly slurred. I bet he’s not long left the town disco. He wants to know where we’re going in order to ask if we’ll give another policeman a lift. You don’t refuse a request from a policeman in a country you don’t know. However, as the back seat is piled high with luggage and provisions, the only free space is in the open trailer. The lift-seeking officer decides to wait for a more comfortable ride.

The policeman says ‘adios’ and wishes us a pleasant journey.

We leave Chile Chico. Our visit has been a short one, but we won’t forget this bizarre little border town for a long time.