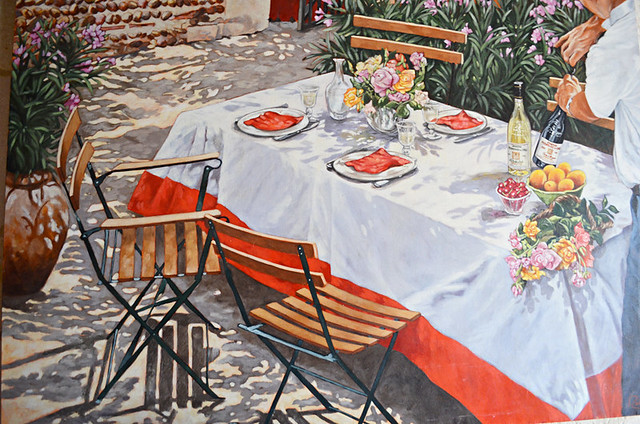 “Could you chill the wine slightly?”
“We don’t chill red wine here,” replied the waiter.
“Red wine is at its best between 14 and 17C and this is slightly warm,” I countered.
The waiter scuttled off to find a wine cooler. The wine was good, but it was definitely too warm.
“Maybe that’s why Portuguese wine doesn’t do so well on the world stage,” I whispered to Andy. “They serve it too warm.”
“How do you know Portuguese wine doesn’t do well on the world stage?”

Andy had a good point. I didn’t know. A quick Google search for recent prestigious wine awards threw up some interesting results.

We know that when it comes to free will we don’t have as much as we like to think. The media manipulates our thinking across a range of topics. Marketing men decide for us what products we’ll buy from essentials to luxury items. In the travel industry, the ‘business’ tells us where the next new hot destination is whilst travel agents point us to where someone else wants us to go. We think we’re choosing, but it’s an illusion. We’re often only choosing from a selected range of products, not all the products available. And those selected products aren’t always the best.

Take the case with wine for example.

A few years ago we listened, enraptured, as Joe Wadsack waxed lyrical about the wonders of Croatian wine at the World Travel Market. No Croatian wine had ever passed my lips, yet that part of the world has been producing wines since the days when people lounged around in togas popping grapes into their mouths.

What chance is there of finding Croatian wine in the average UK supermarket? Last time we visited Britain we were disappointed to find Spanish wines dominating the shelves. Living in Spain we were bored by Rioja and Ribero del Duero. Thankfully we had Canarian wines to choose from, the best of which we found far more interesting than many mainland Spanish wines. But despite a growing reputation in the international wine world, you’re unlikely to find any of those on supermarket shelves in Britain.

Admittedly there’s a far greater choice of wine in British supermarkets than there is in many European countries where wine from outside the country doesn’t get a look in (Germany and Austria are wine producing exceptions). Waitrose’s online store lists red wines from around 20 different countries including Brazil, Israel and, yes, Portugal. The selection is impressive. But whenever we walk into a supermarket in the UK we’re faced by the same old brands from mainly the same countries – France, Italy, Spain, Chile, Australia, South Africa, Argentina and America. In the case of Waitrose those eight account for 91% of what is actually on offer.

Compare this balance with the countries picking up the top wine awards for 2017. At the Decanter World Wine Awards Portugal picked up two platinum awards whilst Spain only did one better with three. The picture with the IWC Awards is even more illuminating, Portugal picking up five of the top awards whilst France, Italy, and Australia came away with four apiece.

The results reveal a couple of things. One, I was completely wrong about Portuguese wine not being recognised on the world stage. And two, UK supermarket wine aisles don’t proportionally reflect the countries which are producing quality wines.

If they did, you should be seeing Canadian wine on those shelves sometime soon as Canada also picked up awards at both the Decanter and ICW awards.

Things tourists should never do in Portugal

One such article on Portuguese website Portugaldenorteaasul, titled 11 things tourists should never do in Portugal hooked me in. After three years of getting to know Portugal, I wondered how these ‘things not to do’ would compare with our experiences. […]