Just as it did for many people, COVID-19 brought an emergency stop to all our travel plans… and we had some very exciting plans for 2020. In our case, as travel writers and Slow Travel specialists, it brought a halt to a great deal of our work as well. But, after a short bout of feeling sorry for ourselves, we saw it as an opportunity to turn our attention to some other writing projects that had been lounging about on the ‘still waiting to get done’ shelves.

One of these was Camel Spit & Cork Trees, my account of a year of Slow Travel through Portugal. 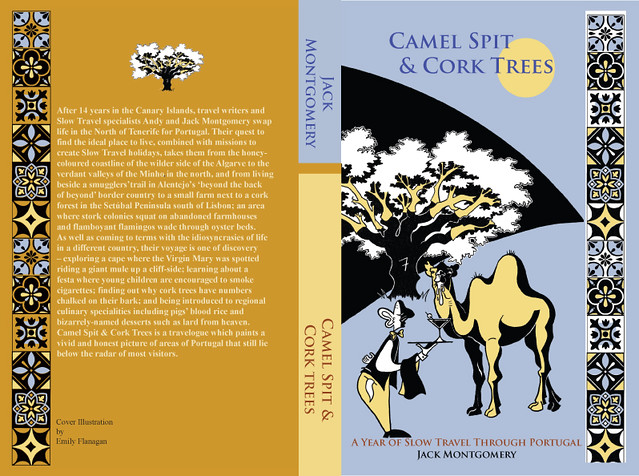 After 14 years in the Canary Islands, and craving adventures somewhere new, we swapped our settled life in the North of Tenerife for a decidedly unclear one in Portugal.

“The first sighting of a wooden post with the word contrabando etched into it is quite thrilling, prompting thoughts about the people who walked these illicit paths, some of whom still live in the neat white houses nestled into the valleys around us. The path climbs through a cork forest, their trunks stripped of precious bark leaving them looking naked and slightly, but not unattractively, odd…” – Walking in Smugglers’ Footsteps: Camel Spit & Cork Trees

Our quest to find the ideal place to live, combined with missions to create Slow Travel holidays, took us from the honey-coloured coastline of the wilder side of the Algarve to the verdant valleys of the Minho in the north, and from living beside a smugglers’ trail in Alentejo’s ‘beyond the back of beyond’ border country to a small farm next to a cork forest in the Setúbal Peninsula south of Lisbon; an area of fisherman and farmers where stork colonies squat on abandoned farmhouses and flamboyant flamingos wade through oyster beds.

“The back door is flimsy to say the least. Thankfully it doesn’t last long as just as it starts to get cold something starts to eat it from the inside. We bring Dona Catarina in to the house to listen to the audible chomping.
“Oh!” she cries when she hears the loud munch, munch, munch before covering her mouth and giggling.” – Warm Days, Cold Nights: Camel Spit & Cork Trees

As well as coming to terms with the idiosyncrasies of life in a different country, our voyage has been one of discovery, of gradually getting to know a fascinating country better – exploring a cape where the Virgin Mary was spotted riding a giant mule up a cliff-side; learning about a festa where young children are encouraged to smoke cigarettes; finding out why cork trees have numbers chalked on their bark; and being introduced to regional culinary specialities which included pigs’ blood rice and bizarrely-named desserts such as lard from heaven.

“We plonk ourselves beneath a TV where Sporting Lisbon are beating Basel in the Champions League, much to the disappointment of the locals (all Porto supporters), and let Vitor do the ordering. When he orders sarrabulho the waiter’s eyes flick towards us and back to Vitor again before he asks in Portuguese, “Are you sure?” He’s a man who has had previous experience of Brits being ‘surprised’ by the region’s speciality dish.” – Lazarus Roosters & Pig’s Blood: Camel Spit & Cork Trees

As it so often is when it comes to travel, the many characters we met along the way made the journey all the more interesting and enriching.

“Francisco finally appears, late (maybe he struggled to catch a taxi as well), looking exactly what we hoped a Portuguese Count would look like. He’s tanned and roguishly handsome with an unruly shock of silver hair; his eyes sparkle as he speaks; his hands flamboyantly accentuate every word; a smile permanently plays across his lips as though everything amuses him; and he’s wearing a green, collarless jacket which gives him the appearance of Christopher Plummer’s Captain Von Trapp.” – Dinner with the Count: Camel Spit & Cork Trees

Camel Spit & Cork trees is a travelogue which is partly about learning to live as a foreigner in Portugal and partly about delving under the skin of areas that aren’t so well known outside of the country. It’s about the land, the people, the food, the weather, the wildlife… and the insects. It’s also packed full of historical, cultural and quirky snippets we picked up during a journey which has not only been an education, it’s been a lot of fun… mostly.

So what’s camel spit got to do with anything? You’ll have to read the book to find out.

Camel Spit & Cork Trees, a Year of Slow Travel Through Portugal is available in both paperback and eBook from Amazon.