“If you spin around three times with your heel on the bull’s testicles it’s said to bring you luck,” says Laura.
It’s clearly not doing much for the bull, the mark of thousands of heels indented on his nether regions. No wonder he’s rearing up. 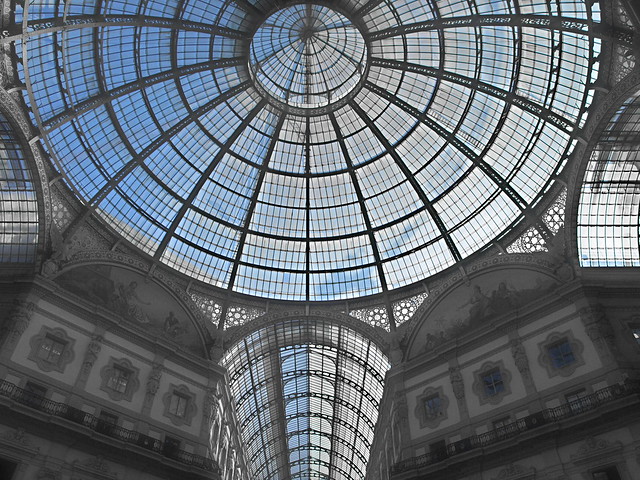 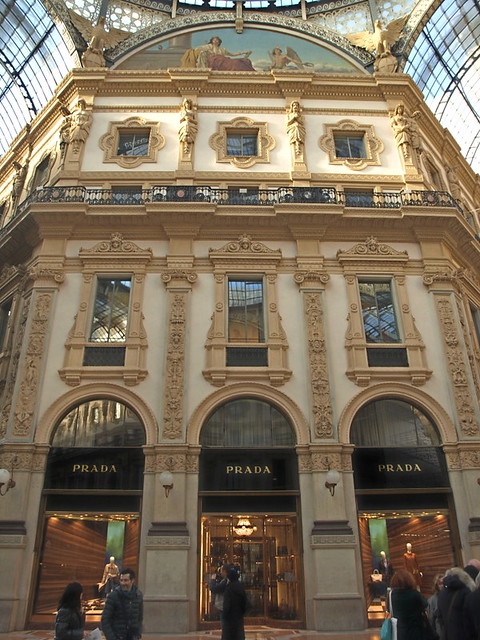 Milan is synonymous with fashion.  Everywhere we look there are names straight from the pages of Vogue; Gucci, Armani, Versace, Cartier. Behind their elegant doors, shop assistants stand ready to assist those who have the spending power to browse their collections without breaking out in a cold sweat at price labels that run to three numbers.

We wander on, leaving a small circle of tourists still waiting to twirl on the bull’s balls, and head towards the Duomo, stopping briefly outside Camparino’s glass frontage.
You’re not a real Milanese if you don’t take campari here in the Galeria,” says Laura, moving on before I’ve had a chance to suggest, “When in Milan…”. 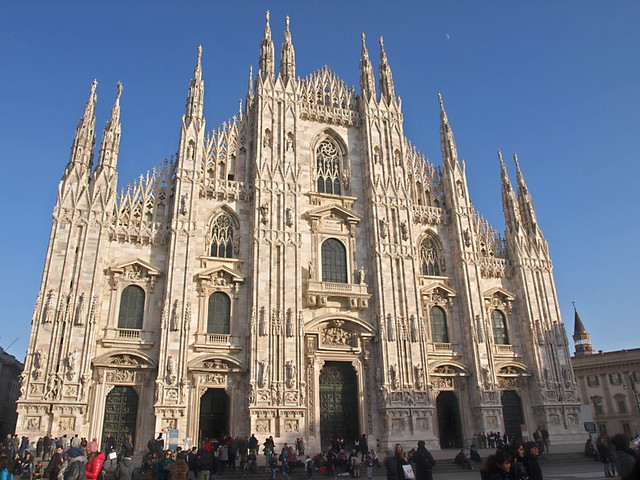 Emerging into Piazza Duomo in the golden sun of a cold winter afternoon, the spires and domes of the cathedral shine like a beacon for the hundreds of visitors milling around the piazza, cameras trained on its magnificent façade. We stroll along Corso Vittorio Emanuele, stopping to window shop at Rinoscente’s eight floors of shopping pleasure dome topped with a trendy café where you can sip hot chocolate overlooking the spires of the Duomo. A temple to consumerism alongside a Christian icon, the yin and yang of the Milanese.

Alexander McQueen, Miu Miu, Bulgari, Gucci, Ralph Lauren, Vivienne Westwood, Paul Smith – they’re all here, their styles as eclectic as their names. But they all have two things in common; there are few visible price tags on display, and there are even fewer customers inside their oh-so-cool shops. Armies of smartly dressed shop assistants stare out at the street, oblivious to the tourists, their eyes trained to spot the affluent shopper at a hundred paces. I begin to wonder if anyone can actually afford to shop in Milan or if these outlets are just showcases for collections, static runways for designers who can’t afford not to be seen in one of the world’s  fashion capitals.
But as we move further down Corso Vittorio Emanuele we begin to pass high street names that are far more familiar to my credit card; H&M, Zara, Pull & Bear, their windows emblazoned with the sales reductions and their interiors teeming with shoppers.

Wandering the streets of the city, it’s obvious that there is plenty of money around. You have only to glance at the sharp suited businessmen with their TAGHeuer watches, and the Jimmy Choo-clad feet and Isabel Marant draped bodies of statuesque young women, striding across the piazza with an Armani or a Prada carrier bag in tow. And I guess if your stock runs to thousands of Euros for a dress or a suit, you don’t have to sell many to make a profit.  Oops, was that the closed Ferrari store we just passed? Time for a campari. 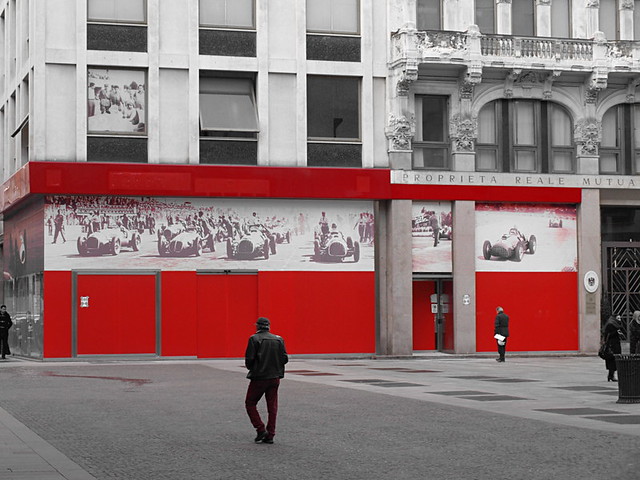 Where to shop for fashion in Milan.
Designer devotees:
The so-called Quadrilatero d’Oro (golden quadrangle) of Milan’s designer shops is centred around Via Montenapoleone, considered one of the 15 most expensive streets in the world, and continues along Via Manzoni, corso Venezia and Via della Spiga. The labels and exorbitant price tags continue into Galleria Vittorio Emanuele.

Designer outlets:
If you like the styles but can’t hack the price tags, head to one of the city’s many designer outlets where this year’s runway designs arrive quicker than they do into UK suburbia, at a fraction of the original price. Il Salvagente in Via Fratelli Bronzetti has been around since 1978 and is popular with visitors, as is Dmagazine which has three outlets in the city, two centrally located in via Bigli and via Manzone.

Alternative, vintage and ethnic clothing:
Try Corso di Porta Ticinese where you’ll find Levi’s Vintage, more denim than you can shake a Status Quo album cover at and a Gas outlet amongst the plethora of small vintage shops and boutiques. Vinyl lovers should head to Serendeepity for used classics and dance music amidst the vintage clothing racks.

Concept stores:
Milan’s newest shopping trend which is pulling the crowds in is the concept store, vast, style warehouses incorporating fashion, technology, beauty and food, all top labels and all under one roof. Try the stylish seven floors of Excelsior on Galleria del Corso and the city’s original 10 Corso Como which opened in 1991 in a converted garage.

BuzzTrips enjoyed a Shopping, Food and Culture Tour of Milan with Wonderful Expo 2015 the lovely people who will take care of all your needs when visiting Expo in Milan this summer. Grazie mille, Laura 🙂