“The trouble with some Cape Verdeans,” says Claudia, “is that they don’t know if they’re European, or African.”
“What do you think you are?” I ask her.
“I am African,” she replies.

Born on the island of São Nicolau, Claudia left Cape Verde as a child and was taken to Holland by her aunt where she was raised and educated, returning to Cape Verde often for family holidays. At the age of 15 years she demanded to return to her homeland. Now she resents the rate of emigration of Cape Verdeans to find work elsewhere and wants to see her country thrive. 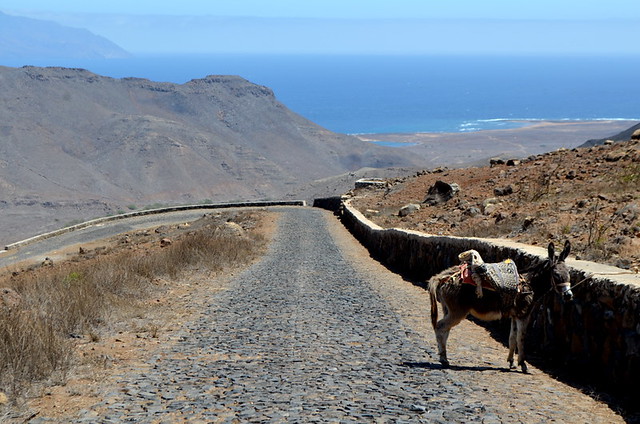 “You see the stones that we are walking on?” Claudia points to the neatly cobbled road we are traversing that winds down from the shrouded peak of Monte Verde to the arid coast of São Vicente.
“These stones are called calcados and every one has been cut and laid by hand.”

An hour or so later we leave the cobbled road and begin to follow a dusty path that snakes through the parched, orange landscape. The sun is at its zenith and shade is a distant memory as we climb and descend the baked earth ridges, high above the coastline with its clear, turquoise waters beyond which the neighbouring island of Santo Antão judders in a heat haze.

As we walk, a figure begins to take form in the shimmering haze, a crack and thud sound accompanying its movements. Bent double, a man is bringing his axe down hard against a large basaltic rock which splinters into half a dozen pieces. Picking up each piece, he chips at the edges until it’s almost flat, then throws it into a pile by the side of the path. Beneath his oversized shirt and paint spattered jeans, the man’s body is wiry and slight. He looks out from beneath the frayed peak of his dirty yellow baseball cap and smiles.
“Boa Tarde.” 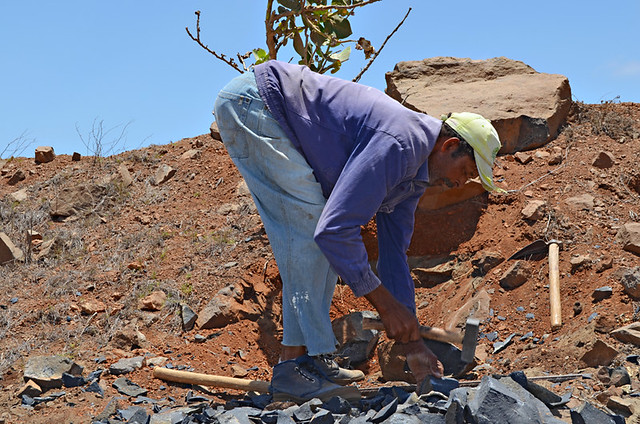 Working with the calcados since he was 12 years old, his regular work in the construction industry has dried up so he comes here to break rocks to make enough money to pay his rent. As we walk on we pass mound after mound of calcados by the side of the path, waiting to be collected by the truck that will eventually bring them back to take their place on the mountain road. 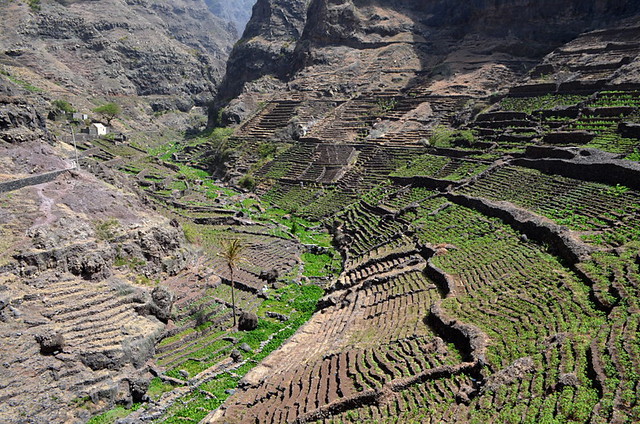 The following morning we take the early ferry from Mindelo to Porto Novo on Santo Antão from where we follow the old, cobbled road that leads to Ribeira Grande. Just 34km in length, task Google Earth with giving you directions and it will tell you the road takes just 28 minutes to drive from coast to coast. Google Earth has clearly never driven the calcados surface or the 100 switchback curves that haul themselves up through craggy peaks to almost 1500 metres above sea level before descending through vertiginous ravines to Ribeira Grande.

This road is the link that gives the bountiful north east of the island access to the port from where 80% of everything cultivated is exported to neighbouring São Vicente. Constructed in 1973, the road has withstood the test of time, the same way the cobbled paths that provide the lifeline between villages and towns across every island in the archipelago have remained true to their purpose. Now these paths furnish visitors with the means by which they can explore the beauty of islands like Santo Antão bringing a welcome tourism boost to the economy. 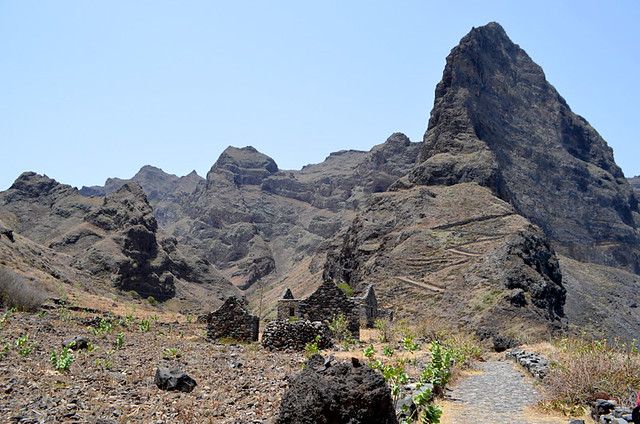 Two days later we’re traversing the coastal path that winds from the small fishing village of Cruzinha da Garca to Ponta do Sol on Santo Antão’s north east coast. Sandwiched between the Atlantic Ocean and sheer cliffs that dwarf our path, we pass abandoned stone cottages whose cane roofs have long since collapsed but whose stone sides stand perfectly intact, as if their construction was completed just a few weeks ago.
“These cottages have stood empty for 20 years,” says Nicolai, our guide. “Look at the quality of the stonework, how intricate it is. Each cornerstone is placed just where it needs to be and is exactly the right shape and size. No other stone in its place would work as well.” 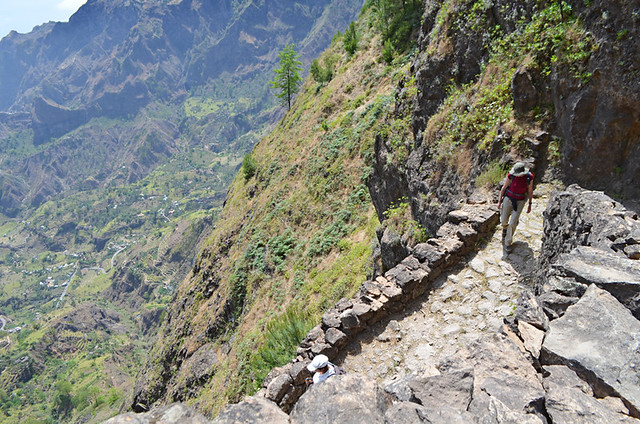 It’s the same with the dry stone walls that line our path, each stone fits perfectly. It’s like a jigsaw. In between the large rocks, hundreds of small stones fill the gaps and level the height, every piece fitting together to create a stone work of art. There’s no denying the beauty of the path we tread, the roads we’ve driven, the cottages we passed and the wall we’re leaning over to spot loggerhead turtles coming up for air in the crashing surf below. To me, these stone constructions have become a symbol of Cape Verde itself, each component brought together to produce something unique, strong and beautiful. African or European, it doesn’t matter. All that matters is their strength; set in stone; built to last.

Casa das Ilhas sits in the Ribeira do Paul, one of the most beautiful valleys you’ll see anywhere, in the north east of Santo Antao. Although it’s not actually far from the coast, it feels as though it may as well be Shangri-La […]