A Guardian article where a handful (drizzle?) of chefs picked out their favourite dishes from 2019 got me thinking about the food we’ve eaten this year. Many of the choices included involved meals in other countries so there was a strong element of travel in the piece.

I couldn’t tell you how many times we’ve eaten in restaurants, cafes, bars etc. in various destinations this year. Basically, a hell of a lot. But there are some dishes which stand out above others for numerous reasons. These aren’t always solely to do with the food on the plate in front of us – a pleasing taste has to be a constant but company, ambience, and location can all enhance the flavours and dining experience immensely.

In no particular order these are my ten favourite dishes of 2019. 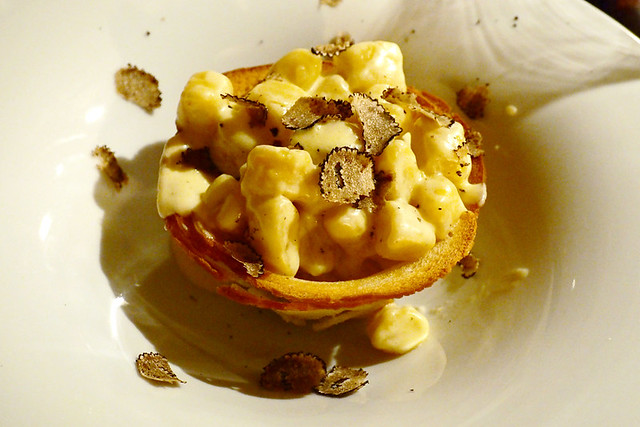 Gnocchetti and truffle, Osteria da Divo, Siena
On a trip to Italy which took in Pisa, Siena, and Florence, a humble portion of cheesy gnocchetti in a melba toast basket was crowned champion dish of all the food I consumed in Tuscany. Truffle, as thin as pencil shavings, elevated it to the gastronomic heavens. It was assisted by an atmospheric location, basically a cellar deep in Osteria da Divo’s bowels. The Siena restaurant’s website describes its lowest subterranean dining area as being ‘tufaceous vaults of the Etruscan period’ which meant not a thing to me. But on a sultry night it was cool (in both senses), romantic and perfect. 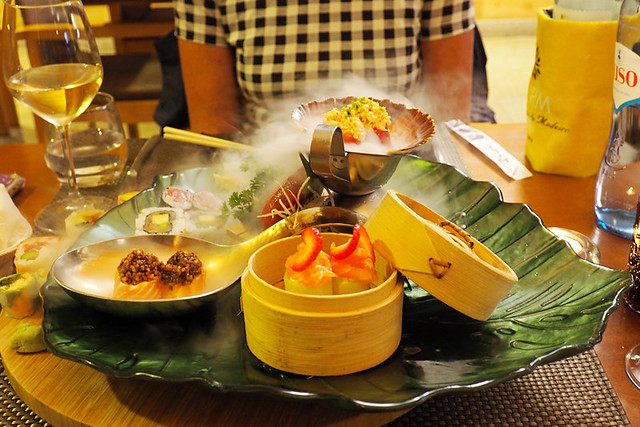 Sashimi/sushi mix, Alma d’Eça, Braga
After a week of hearty fare in Peneda Geres National Park we were ready for something more refined in culinary terms. Having visited the religious city once before and discovered it also had a funkier, contemporary face which extended to its food scene, we knew Braga could come up with the goods. However, we weren’t expecting anything as artistic and taste-bud wowing as a platter of 32 ‘free style’ sashimi and sushi at Alma d’Eça where the menu is Japanese/Portuguese fusion. Each delicate, delicious bite elicited almost obscene groans of pleasure. To top it off there was even pear and ginger crumble with salted caramel ice cream for dessert. 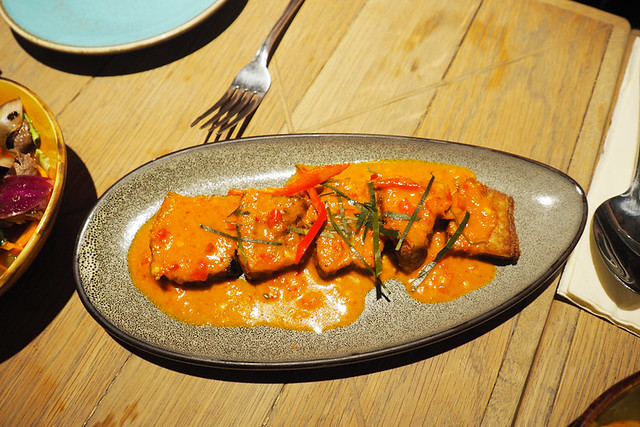 Crispy pork belly in a spicy sauce, Phranakhon Thai Tapas, York
When friends in York suggested eating at one of three contemporary British restaurants, a tapas bar or a Thai tapas place there was no contest. Thai food is one of our favourite world cuisines, and sharing small dishes is a preferred way of dining out with friends, so Phranakhon Thai Tapas it was. The biggest challenge was choosing ten Thai favourites from a menu full of sumptuous sounding goodies. Each mini dish was as pretty as a painting, with a rainbow of contrasting flavours to match. It’s difficult to single out any one offering, but we debated the spiciness of the crispy pork belly most so it wins. 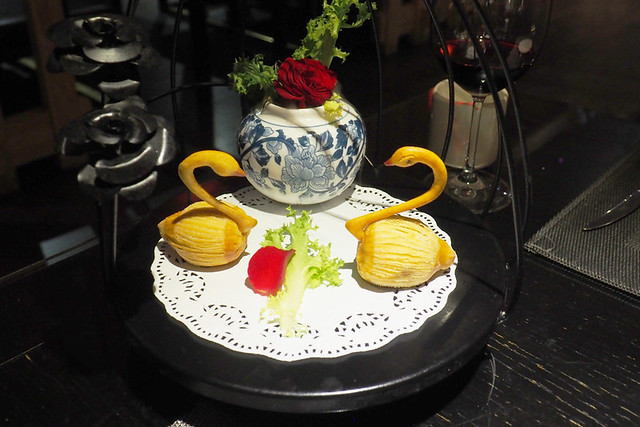 Black bean paste and mango swans, The Old House, Lisbon
I can take or leave Chinese restaurants. At least I could till we ate at The Old House in Lisbon’s Parque das Nações. They serve Chinese food like I’ve never tasted anywhere, not even in China. The clientele are mainly a mix of Lisboans and Chinese rather than tourists and the food is exquisitely and imaginatively presented. The Old House has become a must for us whenever we stay near the airport; each time we dine there something surprises us. The last visit it was a revelation of a dessert consisting of two pastry swans whose bodies were filled with black bean paste and mango. 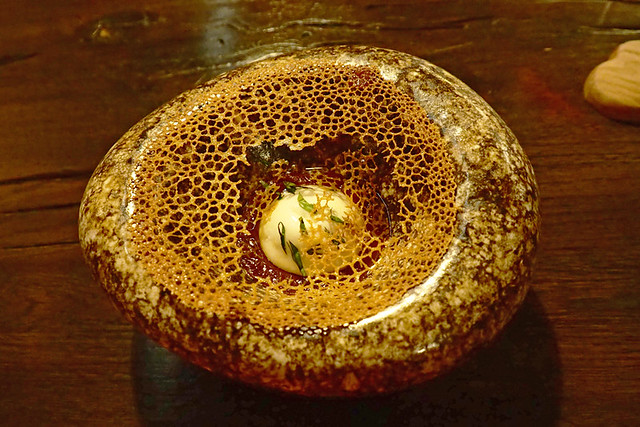 Kefir cream, concentrated tomato, and goat milk tuile, NUB, La Laguna
The latest addition to Tenerife’s Michelin Star stable is the creation of an Italian and a Chilean chef, a mouthwatering combo. We’d missed out eating at NUB in La Laguna in 2018 because the opening of the restaurant was behind schedule, and had been anticipating getting our chops around the taster menu for over a year. It lived up to the Michelin hype. Like many Michelin star restaurants, there was a heavy dose of theatre involved in the execution of the multi-faceted meal. We loved every flamboyant moment from ‘snacks in the cloud’ start to a surprise finale. Kefir cream, tomato, and goat milk tuile served in a stone and covered by a crispy Parmesan grill was star of a star-studded show. 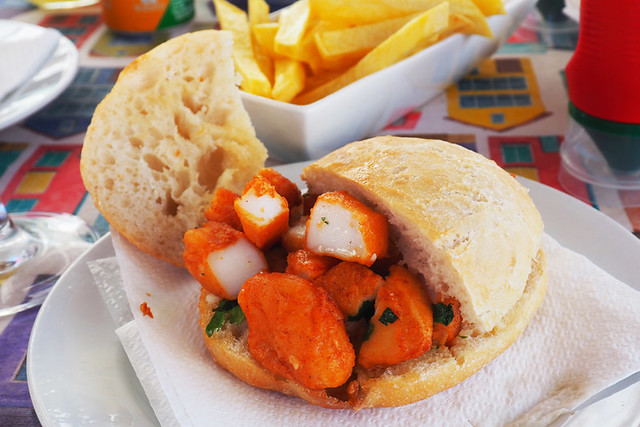 Choco frito buttie, Arrisca e Petisca, Alcácer do Sal
It’s impossible to pick the best choco frito (fried cuttlefish) we’ve eaten this year. It’s become one of those addictive dishes we just have to eat every few weeks, so there’s a lot to choose from. One which was slightly different from the usual cuttlefish and chips was a choco frito buttie at Arrisca e Petisca beside the river in picturesque Alcácer do Sal. The tender choco was cut into little cubes which were packed into a soft roll (the Portuguese bake excellent rolls); perfect for a snack lunch with a Sagres beer and the town’s brass band adding an impromptu soundtrack. 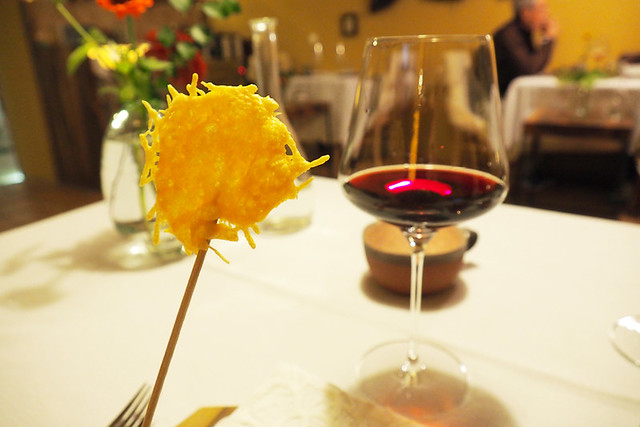 Parmesan lolly, Hiša Raduha, Luce
There’s something refreshing about the occasionally naive approach to tourism in rural areas of Slovenia. Hiša Raduha in the riverside town of Luce is the most sophisticated restaurant for miles around, it even has two tasting menus. One has four dishes, the other six. This is where charming naivety sneaks in. Despite a quartet of dishes, diners only get a knife, fork and a spoon. We got it wrong immediately by using the spoon for a runny starter, leaving us spoon-less when it really mattered. Additionally, everyone eats at the same time. If any fellow diners opt for the six course menu, the four-coursers have to wait patiently whilst the sixers finish their extra courses. It makes the whole experience memorable, and the food is really good. A black, squid ink roll was a treat, but best of all was a Parmesan lolly amuse-bouche. 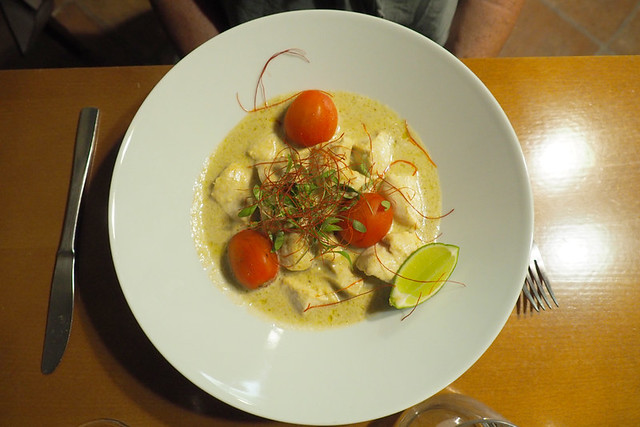 Thai green curry, Flavors, Palmela
Flavors menus are written on azulejos, traditional Portuguese tiles, which is apt as this friendly little restaurant is part of an artistic centre which includes a tile workshop. Half the dishes involve traditional Portuguese cuisine (they do a superb selection of their version of alheira sausages) and half reflect various world cuisines, usually ones with a historical link to Portugal. It’s a restaurant we like to take visiting friends to; last time we all opted for their Thai green and red curries. Those perfumed flavours performed a sensual dance on my tongue, reminding me I didn’t eat Thai food anything like enough. 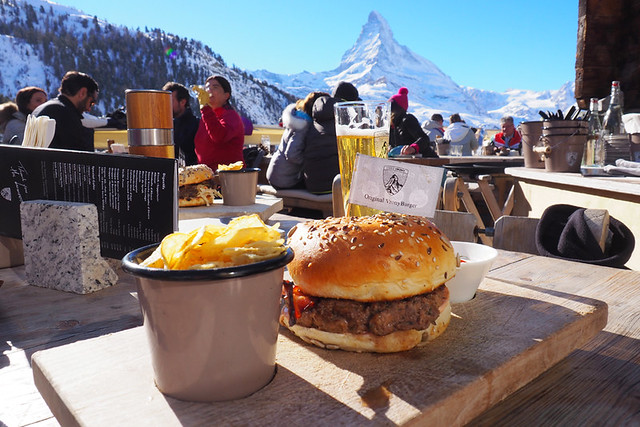 Vrony Burger, Chez Vrony, Zermatt
Vrony burgers are legendary, and very good as burgers go – big, beefy and tasty. But for a burger to be almost €30 you’d expect it to perform a song and dance routine before diving into your mouth with a flourish. The ones at Chez Vrony, on a snow-clad slope in Zermatt, don’t have to; they have something else which makes them extra special. They’re accompanied by resplendent views of the Matterhorn. Yet again, the company boosted the surreal, satisfying and unforgettable experience of paying a fortune for a burger whilst lapping up views of Toblerone Mountain and basking in warm sunshine even though temperatures were in minus part of the thermometer. 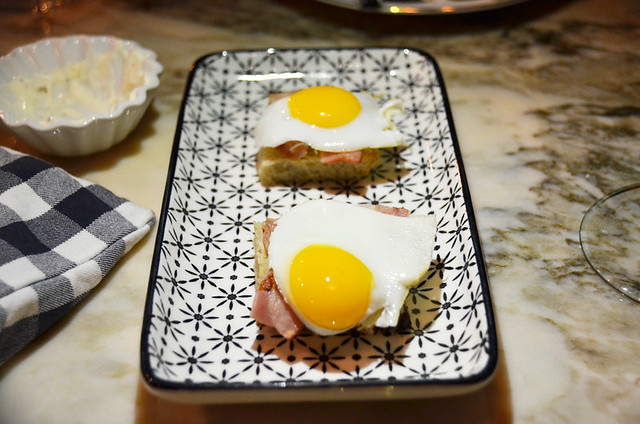 Quail egg petisco, 490 Taberna STB, Setúbal
Sometimes the simplest things can have the greatest impact. 490 Taberna STB on the main avenue in Setúbal is one of our two ‘go to’ places when we have a yen for petiscos (Portuguese tapas). Bursting forth from a savoury selection which included sautéed wild mushrooms, fried prawns, alheira croquettes, roasted black pork chorizo, and melted goat’s cheese in a tomato sauce were bite-sized portions of quail egg and presunto (cured ham) on a square of fried bread. Eating one is akin to scoffing a fried breakfast in one bite – sinfully good but only in a teensy-weensy way.

Tsunamis and erupting volcanoes in the Canary Islands

There was bemusement in Spanish language press where the UK gutter press is often seen as something of a joke, not a particularly funny one. The Tenerife Tourism Board sent out a press release to counter what they referred to as “a number of misleading reports in the UK media”. […]