For the past two and a half hours we’ve been enjoying our five course tasting menu in the Castello district while the rain outside the window has been sending the surface of the canal into frenzied stipples. Now the rain has stopped but as we emerge from our gastronomic cocoon it’s to a parallel world to the one we left when we entered the restaurant. Myriad refracted lights dance off rain-sodden streets whose polished cobbles raise their heads above the deluge, gasping for air. The restaurant tables and chairs that thronged with pretty women wearing pretty summer dresses and sipping on Aperol spritz are now stacked in dripping towers, forlorn. 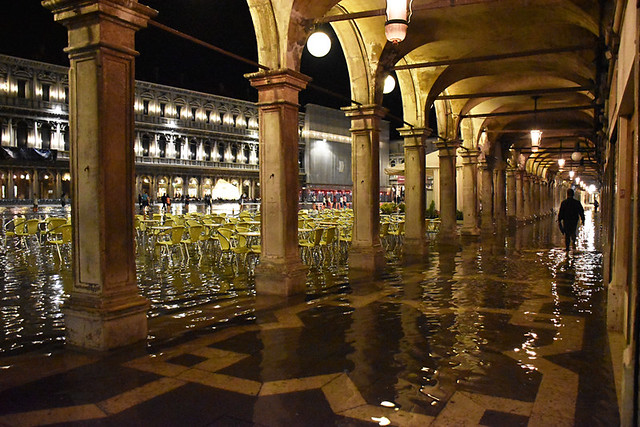 No longer carried in a tide of tour groups, we stroll the near-empty streets towards Piazza San Marco which we have to cross to reach our hotel. At the entrance to the piazza, vendors are selling plastic overshoes at €5 a pair. There are hardly any potential customers on the streets so their sales technique is tenacious. Beyond their grasp we peer across the expanse of the piazza, most of which lies beneath the level of the water which continues to rise, fed by gushing fountains that are sending the manhole covers into swirling dervishes as if held aloft by the dancing feet of an underwater acrobat.

Declining every shade of neon plastic overshoe that is trust into our path, we thread our way through the narrow alleys, trying to find an alternative route back to our hotel. At each intersection we peer into the piazza to see if the water is receding but to no avail. Following the edge of the canal, we finally arrive at a bridge that isn’t flooded and we know we can make it back to the hotel with dry feet. We cross over to San Marcos and skirt the northern edge of the piazza. 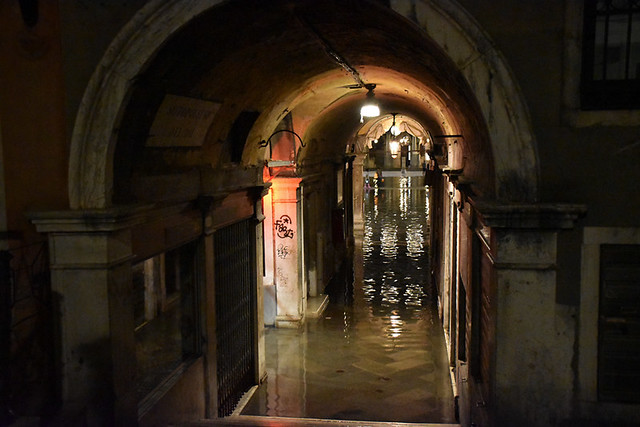 “Just one more photo,” says Jack, disappearing down an alleyway. I follow.

Milling around the edges of the piazza are a few dozen people – some are just standing at the edge of the water like reluctant paddlers, others have removed their shoes and are walking through the rain, splintering the illustrious reflections and sending them racing in shards across the surface. From behind the façade of Caffè Florian, the strains of a philharmonic orchestra drift into the piazza lending the scene an ethereal romance. I’m already spellbound when the orchestra begins to play Time to Say Goodbye (Con Te Partiro), and a scene that was merely exalted, transcends into divinity. 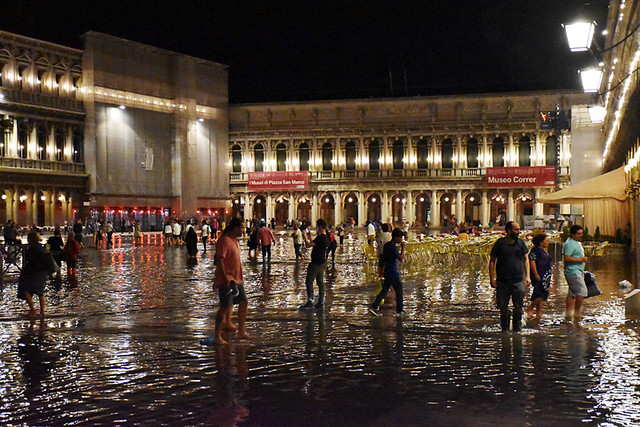 In the midst of its flood waters, two young women begin to waltz barefoot. The water laps around their ankles; the floodlit façade of the Doge’s Palace pours its gold in rivers to dance around their feet; the arched portals of the Basilica look on in raptured silence; the orchestra plays, oblivious to the drama that is taking place off-stage. And I stand and watch, tears welling in my eyes. 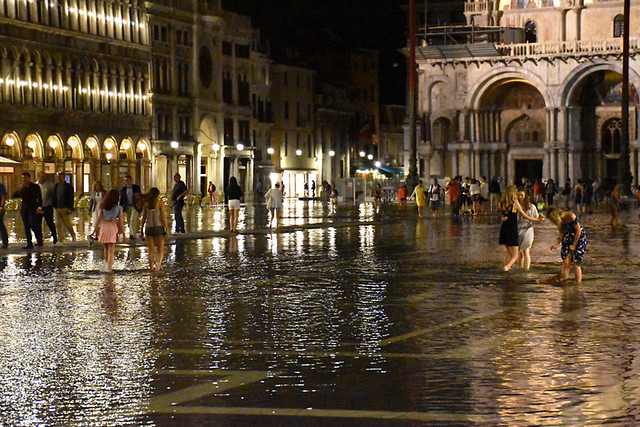