Reading The Dictator’s Highway by Justin Walker transported me right back to the pot-holed, dusty main road which runs for 1240km from Puerto Montt to Villa O’Higgins, connecting the north of Chile with the remote, under-populated southern region. To travel the Carretera Austral is to have an unforgettable adventure. 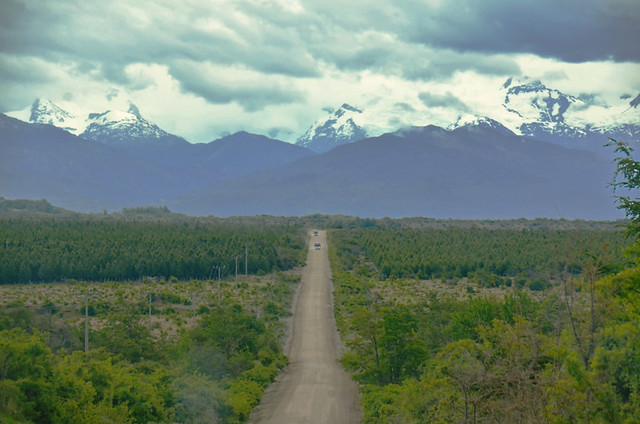 The book follows Justin’s adventures as he spends six weeks hitch-hiking from Villa O’Higgins to Puerto Montt. Four years ago we spent 15 days driving the Carretera Austral. Although we covered 1500km between Quelat and Caleta Tortel, we missed out the 350km or so between Quelat and Puerto Montt. On the face of it, there’s no comparison between our journey and Justin’s, but as I accompanied Justin on his travels north, I found I was able to recognise most of the towns and many experiences from our time there. I also found myself pondering the differences in the way Justin tackled the Carretera Austral and the way we had. 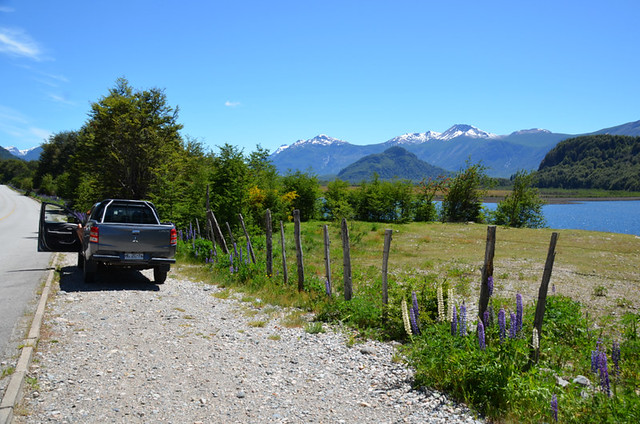 We did it on a package – all hotels booked in advance, activities pre-arranged (mostly), ferry tickets sorted etc. But, as people who design specialist holidays, we know only to well there are package holidays and there are package holidays. We booked with Pura Aventura who took care of all the logistics. But once we emerged from the small airport at Coyhaique it was us, our Mitsubishi pick-up, and the road stretching ahead to who knows what adventures. I know some might still view this as being pampered, but something occurred to me whilst reading the book. Hitch-hiking can bring a thrill of unpredictability (or result in hours of boredom waiting for a good Samaritan) and lead to encounters with interesting people. But once the hitch-hiker is safely ensconced in a vehicle, it’s the driver who’s actually experiencing what it is like to actually drive the Austral, and it is one hell of a ride.
The biggest drawback I could see to hitch-hiking was the limitations. Justin often found himself being told about ‘attractions’ that were a drive away. We had the freedom to go where we wanted, when we wanted. We were able to cover ground quickly (relatively speaking), meaning there was more leeway for ticking off the things we wanted to do/places we wanted to see. 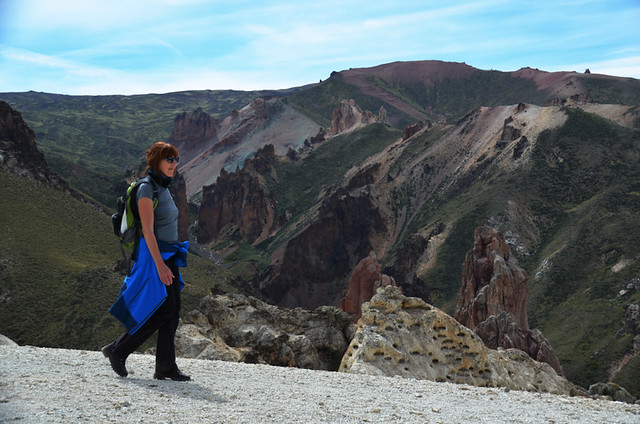 We also had sufficient time to notch up around ten different hikes – including the Bosque Encantado (Enchanted Forest) and the Ventisquero Colgante (Hanging Glacier) near Quelat; the Valle Lunar in Chile Chico; crossing the Calluqueo Glacier near Cochrane; walking in the mountains above Puerto Guadal; and trekking through guanaco-land in Patagonia National Park. On some routes we walked on our own, on others we walked with a guide. There’s no question Justin enjoyed more intense and rawer hiking experiences. Having a car though gave us freedom to get to some of the more remote trails where we rarely encountered any other hikers. 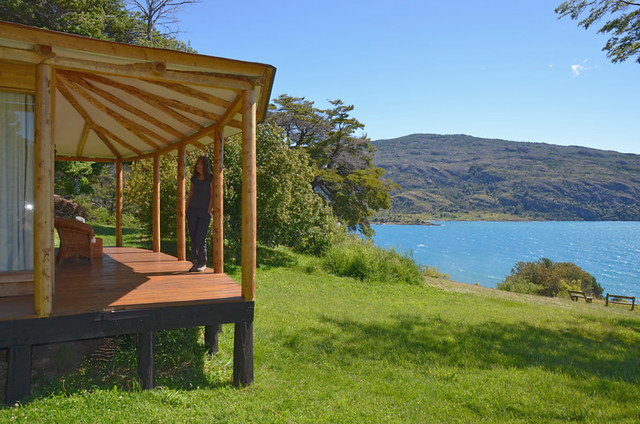 Justin camped or stayed in simple hotels, we stayed in lovely lodges – definitely the pampered travellers in this case. I enjoyed reading about his experiences, and of the camaraderie around campfires at the end of a tiring day. But, after a long day driving and exploring, I wouldn’t have swapped comfortable cabins on the shore of the Lago Gral Carerra, above the Baker River, and on the banks of the Quelat River for a tent and a chin-wag around a fire, or a basic room in a hostel. It was a posh way of experiencing the route for sure, but the lodges we stayed in enhanced the experienced for us. And we were still able to enjoy a chin-wag with interesting people over dinner in sociable dining rooms. 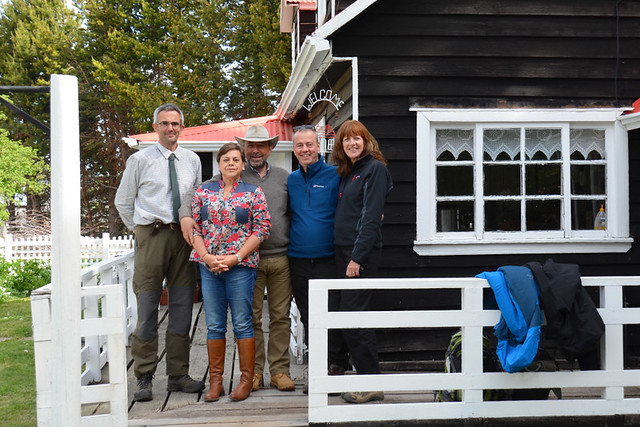 There’s simply no contest between the amount of people you encounter when travelling on foot compared to the number encountered when journeying by car. However, it’s impossible not to strike up conversations with others when travelling the Austral by whatever means – people like the student we met in Guadal who told us all about the controversial HidroAysén project; or trying to explain who Colin Farrell was to a quartet of bemused Argentinians in Tortel (the captain of our small motor launch was a dead ringer for the Irish actor); sharing cordero asado (roasted lamb) and debating Donald Trump in a guincho with a ranch owner and an English guide; simply chewing the fat whilst hiking & horse-riding with lodge owners in Quelat and Guadal; and hearing tales from some of Britain’s Paralympic team about their tents being flooded when the water in the river they were camping beside rose during the night. Interesting locations attract interesting people.

Gastronomy along the road 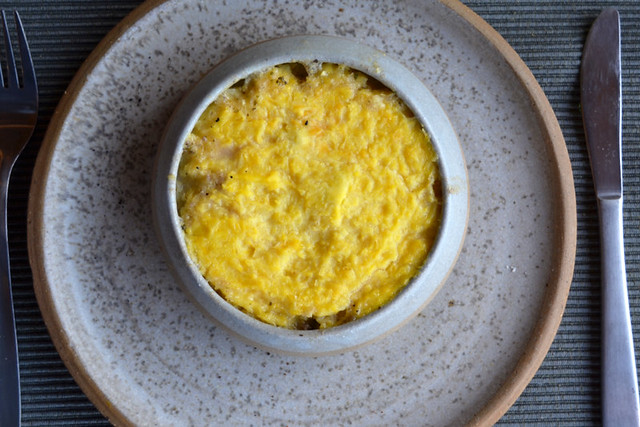 We loved the food we were presented with along the way – hearty, warming soups; chunky, tender steak on quinoa beds; pastel de choclo; salmon and mushy peas; palta reina; doorstop sandwiches; lomo a lo pobre; kidney and mash; sopaipillas; chorillana; valdiviano; chuchoca; crab claws; locos; barbecued sausages all had us signed up as fans of Chilean cuisine.
The best meals were in lodges, but we also enjoyed good, traditional fare in simple restaurants, and even a converted bus. Whereas The Dictator’s Highway brought what had been an incredible adventure back to life, the food referenced generally didn’t reflect the same richness of cuisine we had devoured with relish. 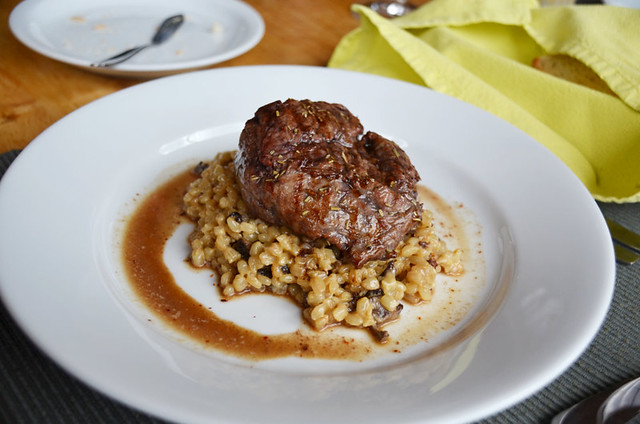 There are different ways to travel, many have their own particular merits whether it be on a budget, mid-range, or luxury; although, five-star travel is often detached from the reality of life in any given destination. However, opting for the cheapest all the time can result in quality taking a hit, especially when it comes to food. And that’s what I felt happened in this case. It’s no fluke the best meal Justin had was when he forked out a little bit more money. 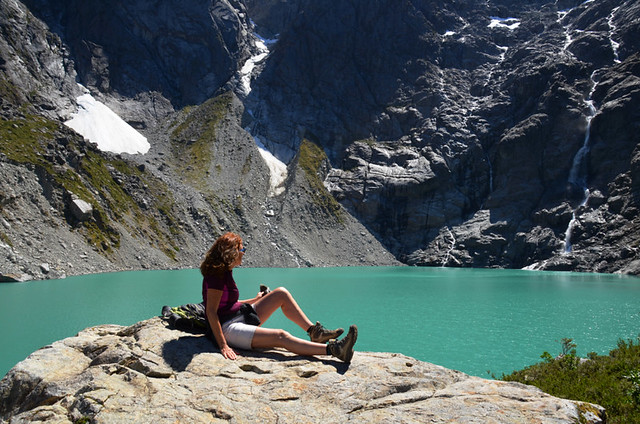 Two weeks of driving the Carretera Austral is never going to come close to matching the experience that someone who spent six weeks walking it would have packed away in their mochilla. But reading Justin’s adventures in The Dictator’s Highway made me realise that even though ours was a ‘packaged’ version, it still gave us a satisfyingly decent dollop of many of the sort of escapades he had shared in the book.