When you think of Provence, what do you see?
Fragrant fields of lavender laid like rich tapestries at the feet of hilltop villages; plump purple grapes hanging beneath gnarled boughs, the musty scent of their dusty skins rising on the hot air; seas of sunflowers stretching towards the horizon, their eager, yellow faces raised towards the sun above the parapet of their green stems, like children on tiptoes, straining to see above the sweet counter? 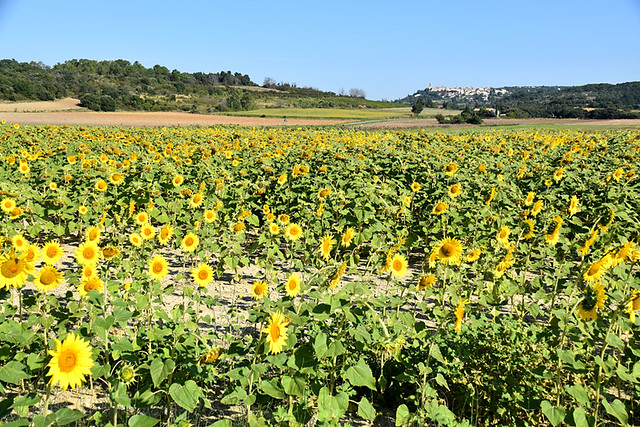 Having spent many happy days walking in Provence, our memories are of gentle paths meandering though meadows and green valleys alongside endless fields of lavender and vines, the kilometres passing by almost imperceptibly. Arriving into Drôme Provençale, we had no reason to expect it would be any different. Occupying the fertile land between the Rhône and the Alps, driving through Drôme Provençale you could easily be forgiven for thinking you were still in Provence, its sun-baked landscape displaying all those quintessential elements of its southern neighbour. But delve below the surface of this slice of the Enclaves des Papes and the subtle differences of its singular nature begin to reveal themselves. 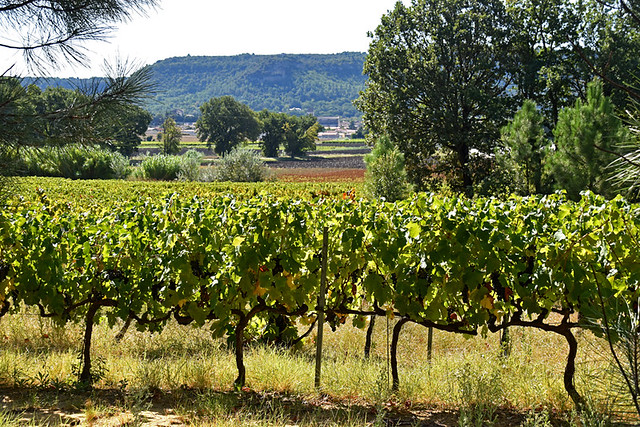 Last September our work took us to this less-visited region of southern France to tread its paths and explore its towns.

Grignan
Our first walk began in Grignan, standing proud on its hilltop vantage, looking for all the world like any perched village in Provence yet all the time we’ve been exploring the town, I haven’t heard a single English voice, only French, and despite it being a glorious day, many of the tables in the village square are free, and the narrow streets are un-congested. I’ve only noticed a handful of restaurants and cafés, despite this being the main town in the area, and the only hotel I remember seeing is the chic, boutique and (given that the town holds an Annual Writing Festival) ingeniously named, Le Claire de la Plume. If this was St-Rémy-de-Provence, Tarascon or Avignon, we would be elbowing our way through crowds. 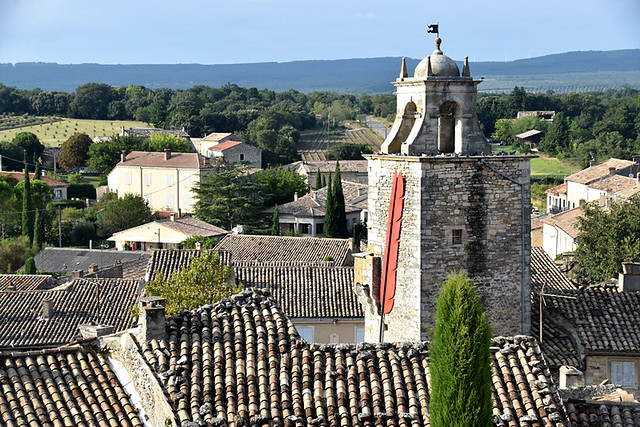 Leaving the village, our route winds its way south towards the river where it appears to come to a dead end at the entrance to a riding school. Confused and not a little anxious that our research has gone seriously awry, we ask a woman riding a horse around the practice paddock if she knows where the path is and she assures us it’s right through the middle of the equestrian centre. Despite her assurances, we’re a tad intrepid as we begin to wander along the track flanked by paddocks where curious horses lift their heads from grazing to watch us stroll by. When we emerge from the woods, it’s to a world of olive trees, sunflowers, courgettes, vines and sweetcorn – a cornucopia of late summer produce carpeting the meadows alongside the dense oak forests and beneath the landmark finger of Chamaret’s mediaeval dungeon, pointing to the heavens like a directional portent. 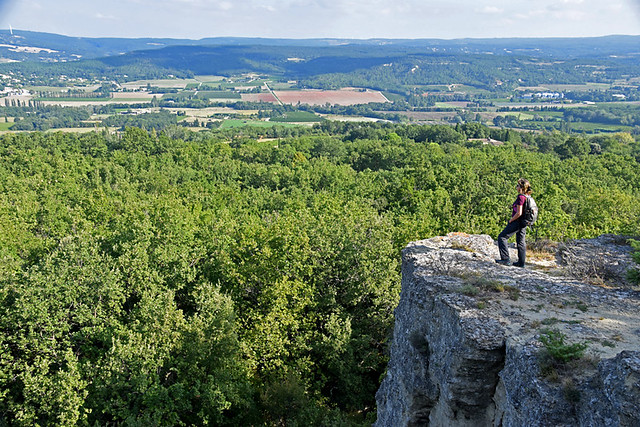 The next day we walk from the door of the chambre d’hôte to Val des Nymphes, our route taking us along unkempt paths and climbing through woods along a Poet’s Path to reach the 70m vertical cliffs of Les Crevasses, formed in 1774 when the Rouverge plateau fractured and shifted. For little effort, we’re rewarded with grandstand views over the plateau as we follow a narrow path along the tops of the cliffs. Far below, a trail winds its way through the base of the Crevasses but with unruly rockfalls to negotiate and long stretches no wider than a rucksack to squeeze through, all beneath the constant threat of further rockfall, it’s not for the faint-hearted, and a long way from the gentle strolling of Provence. 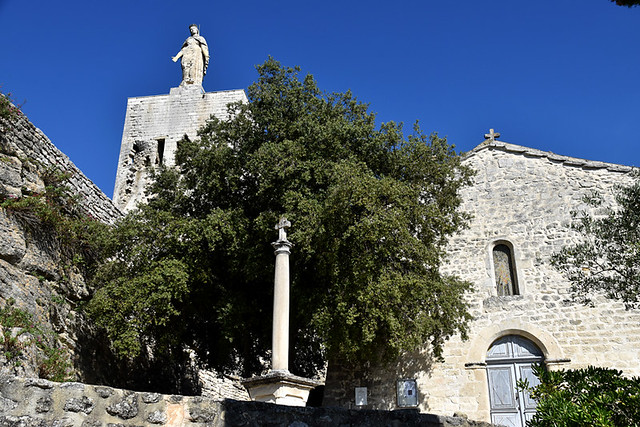 Into the fascinating, former Knights Templar stronghold of Clansayes, and then through the grounds of an extensive vineyard, walking between rows of vines heavy with purple fruit, our multifarious route finally arrives into the woodland world of Val Des Nymphes, at the foot of the perched village of La-Garde-Adhémar, one of the designated plus beaux villages de France. 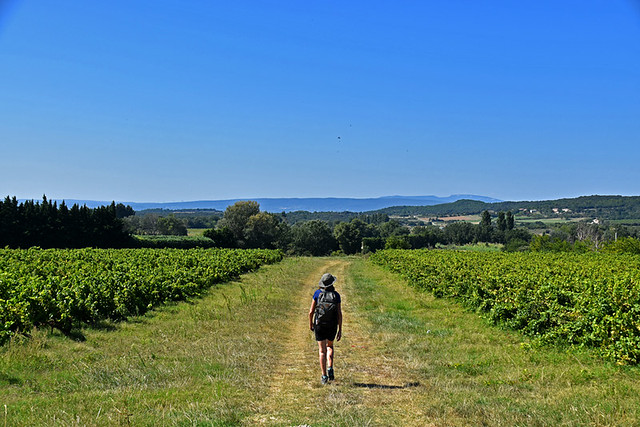 La-Garde-Adhémar
Strolling into its shady village square on a sunny Sunday afternoon, it’s easy to see why La-Garde-Adhémar is celebrated. Honey-coloured stone cottages with powder blue wooden shutters line the narrow cobbled streets and the shady village square where the tables and chairs of L’Absinthe and L’Epicerie restaurants spill onto the cobbles, and the scent of freshly brewed coffee lingers over discarded coffee cups. In Le Jardin des Herbes, that lies below the old walls, we wander the paths between medicinal plants and herbs, their colourful, chaotic plantings breaking ranks and escaping over borders in a bid to colonise neighbouring beds. Once again we’re on our own as we descend to the lower garden and through a small gate onto a dappled path that will lead us back through dense oak forests, to the Val des Nymphes. 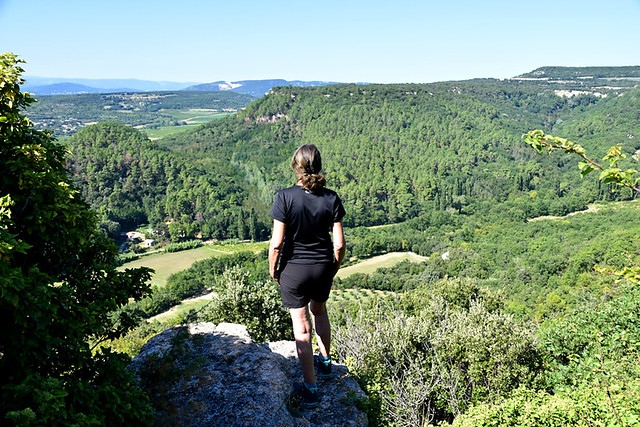 Tales of magic, mystery and sacrifice surround Val des Nymphes where labyrinthine paths thread their way over the gnarled roots of Holm oak trees where hidden treasure lies in the form of black truffles. Tell tale impromptu holes surrounded by mounds of displaced earth betray the presence of wild boar and their midnight treasure hunts. As paths twist and turn through low branches, we follow a trail of symbols which is supposed to lead to ancient sacrificial sites. Briefly emerging from the dense tangled woods into sunlight, we see a large, flat boulder jutting out over the valley alongside one of the symbols we’ve been following and conclude that this must indeed be the site of primordial carnage. As I stand astride the rock, I imagine throats being cut and blood spilling into the undergrowth below. Unfortunately (or fortunately) my imagination is far more powerful than the truth and our stone turns out just to be, well, a stone, while the actual sacrificial stones are simple stone troughs and look like they would be used for nothing more sinister than treading grapes.

St-Paul-Trois-Chateaux
Walking from Val des Nymphes to St-Paul-Trois-Chateaux, we are once again transported back to Provence, our gentle paths wending through meadows grazed by thoroughbred horses, fields being ploughed by tractors, and lavender fields whose harvested stems still exert a faint perfume in the heat, their silver lines spreading like mercury trails across the scorched, late summer earth. 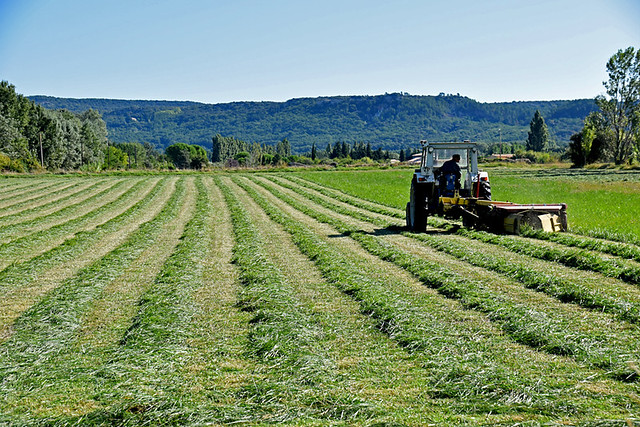 On our final day we follow a truffle trail through the forest above the town to reach the village of St Restitut, famous for its white stone quarries. Wandering through its streets with their white stone houses, is like being on a film set before shooting begins. Nothing stirs. Apart from an elderly woman sweeping the white stone step of her white stone home, there’s not a soul around. At the end of the village lies a memorial to those whose job it was to quarry the stone, a white Stonehenge standing above the plateau. A narrow trail leads from the stones, along a magnificent path cut like a balcony above the Tricastín plateau, to the Chapel St Juste and a 360º panorama of this small corner of south east France, this unhurried, uncluttered Provence with attitude. 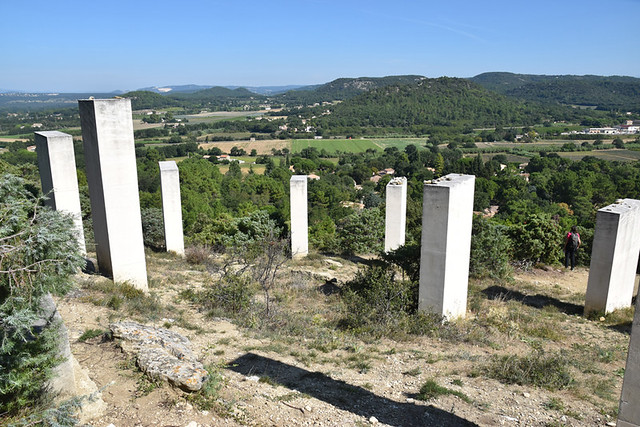 Getting there:
We flew into Marseilles, hired a car and drove to La Garde-Adhémar, a journey of 130km, which took us an hour and a half.

Staying there:
You’ll find few large hotels or tourist complexes in the Drôme, instead the region has plentiful chambre d’hôtes, charming and characterful, privately-owned guest houses, usually set within extensive grounds with a swimming pool, where you can base yourself on a bed & breakfast basis. Many will commonly also provide dinner on a pre-arranged basis. We were based in Les Esplanes, just outside La-Garde-Adhémar, where we rented a small gîte within the grounds which gave us the freedom of self catering while still enjoying all the charm of the chambre d’hôte.
Chambres-Hotes.fr is choc-full of places in and around the region. 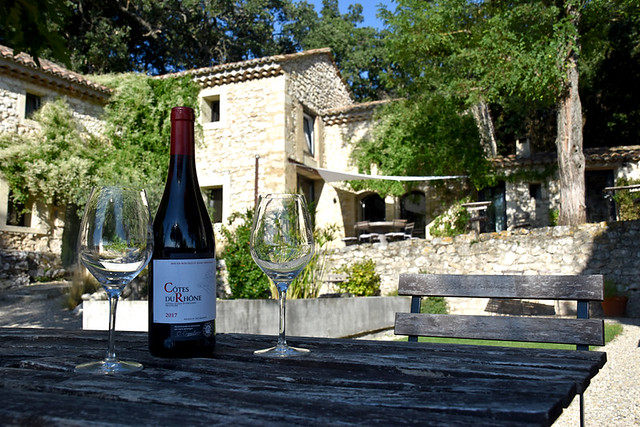 Walking in Drôme Provençale:
There are lots of walks and paths in the region and you should pop into the tourist office in Grignan to pick up information and a map.
We were there working as consultants for Inntravel who provide an itinerant walking holiday (walking from hotel to hotel while your luggage is transported for you) in the region – Secret Provence.

History and Nature Collide at The Eagle’s Nest in Berchtesgaden

Hitler presented this face of beauty and tranquillity to his diplomatic visitors in a venue as spectacularly picturesque as the plans that were being hatched beneath its façade, were grotesque. […]