We arrived at the apartment later than we hoped/planned/expected. A game of hunt the connecting train from Lisbon Oriente to Lisbon Santa Apolonia was to blame, the train not arriving at the platform the screen suggested it would. Trying to figure out this game of platforms delayed us. But we fared better than a young Brazilian couple who’d be trying to find their way back from Sintra for days. Then there was the whole messy business of getting to grips with the Metro once we got to Santa Apalonia. 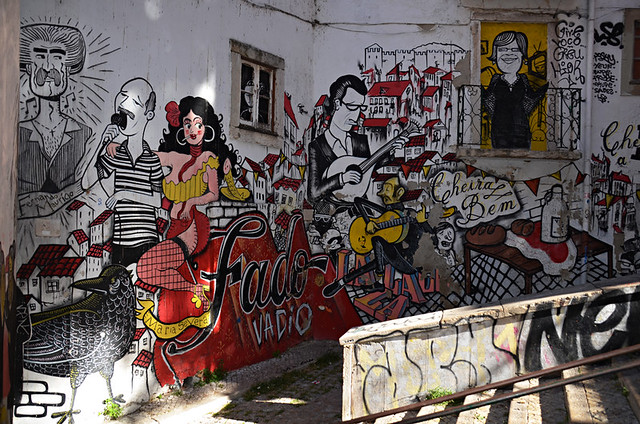 The upshot is we rolled up to our apartment in the heart of Lisbon’s multi-cultural Mouraria district at 8pm instead of late afternoon/early evening. By that time I was pining for the simplicity of getting around the city we’d just left, Porto.

The apartment cut a huge chunk in the dark clouds of my mind. Located in an old town house, it was spacious, beautifully decorated, had loads of places to lounge and sip Portuguese wine and, best of all, it had a terrace. Despite the rich seam of restaurants to be mined in Lisbon two factors prompted a decision to buy a pizza from the supermarket and eat in. A) it was an apartment, we had to stock up on basics immediately and therefore a supermarket dash was essential before we did anything else. B) All the restaurants we’d passed had been buzzing with diners. Experiences in Porto told us unless we’d booked, we had to turn up early if we wanted to nab a table. 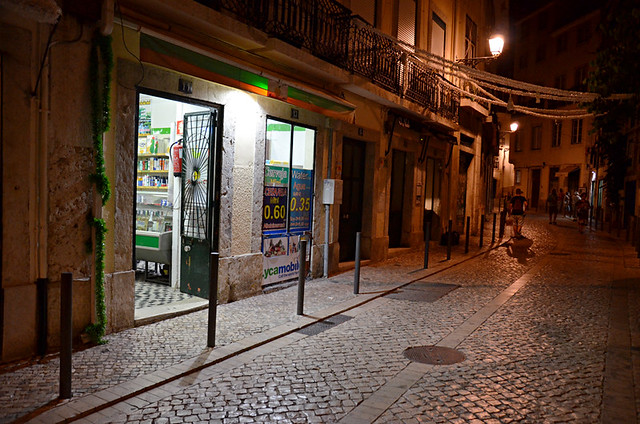 We got to the supermarket just as the shutters were slowly descending to the floor. 9pm, what time is that to shut a supermarket in one of Europe’s main cities?

Luckily part 1
Luckily Mouraria dances to an independent rhythm; one which isn’t dictated by corporate hours. A small independent supermarket was still open. In our time there I never saw it shut. It was good for water, wine and bits & bobs, but not really anything for a meal which was worthy of a first night in Lisbon. 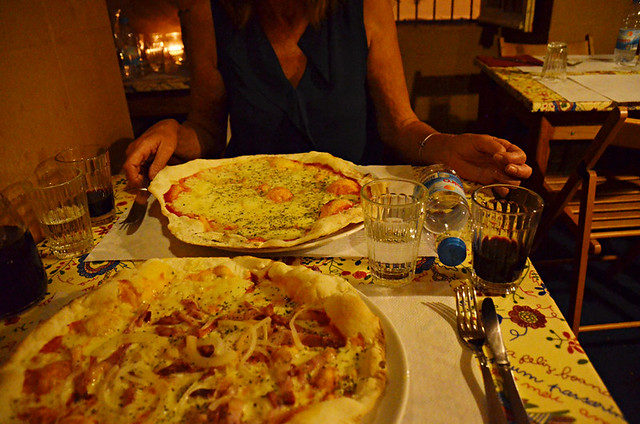 Luckily part 2
Luckily the aroma of baked bread and melted cheese drew us to a darkened doorway and a dimly lit room full of people tucking into pizzas – the Cantina Baldracca. We tried our luck and were squeezed into the last available table. Within minutes there was a queue of people waiting to get in. The Cantina was tiny, dark, infectiously lively and our first proper taste of the life which makes Mouraria a seductive place to stay. The pizzas had thin bases and tasty toppings, the wine was served in chunky tumblers. Opposite me was a window with bars which looked onto an alley where black and white photos chronicled the lives of the people who lived there. Simple, colourful, fun and friendly. All in all a reflection of the neighbourhood itself. 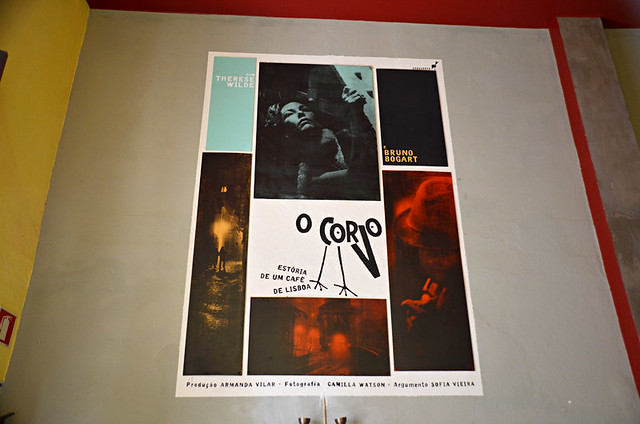 Lunching at The Crow
After a failed attempt looking for a light lunch of fish butties (a Lisbon thing) in the claustrophobic streets of Baixa-Chiado we escaped both crowds and oppressive heat by heading back to Mouraria’s tranquil maze and, more specifically, O Corvo. Located on the tiny square of Largo dos Trigueros, O Corvo has a funky film noir vibe and an appealing menu. Sitting in its cool (in more ways than one) interior dipping thick chips into hummus and even thicker chunks of bread into a zingy ceviche felt a million miles from the frantic world of the city centre. 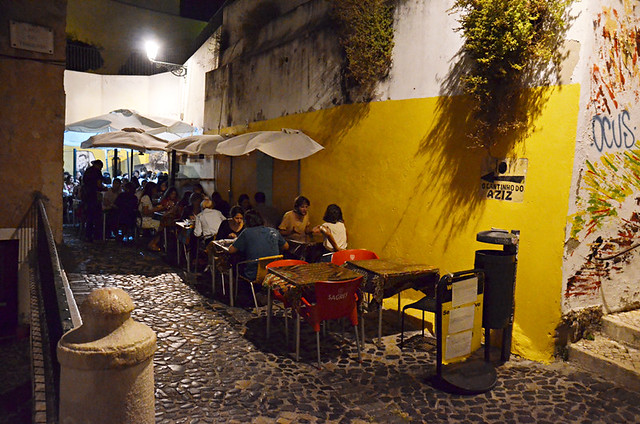 Out of Africa
We returned to Largo dos Trigueros for dinner, drawn by the Mozambican menu at Cantinho do Aziz (not deterred by the Daily Mail describing it as having ‘the best African food in town’). Once again we hadn’t reserved. Once again we ended up with the last two available tables and squeezed into a recess in the cobbled alley along with other diners. Once again the atmosphere was buzzing. We ordered chamussas (samosas), yam chips, crab curry, spicy frango (chicken) with coconut rice. The samosas came with a sauce which was blow your head off hot. “That sauce is very hot,” the waiter commented just a bit too late to save us, adding. “I’m not brave enough to try it.”
As we soothed seared throats with cooling Mozambican beers we realised there was one constant about dining in Mouraria – eating out was a lot of fun. 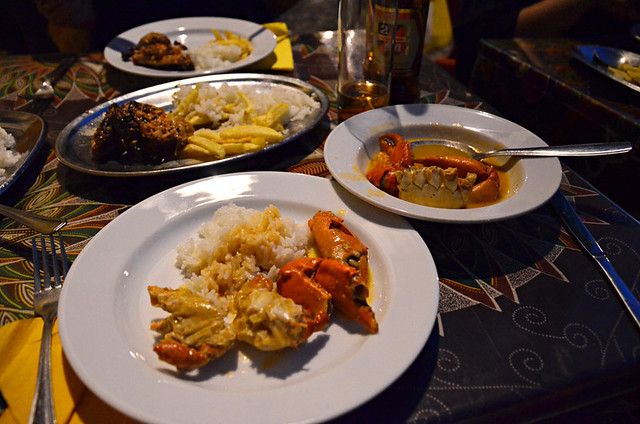 Tapas Portuguese style
“We make our own sparkling wine.”
“Oh go on then twist our arms up our backs, we’ll have a couple of glasses as an aperitif.”
By the time our food came at Espumantaria do Petisco we were both a bit woozy (lightweights when it comes to sparkling wines). Located above Pingo Doce supermarket in Mouraria, Espumantaria was a bit more upmarket than the previous restaurants – more of a comfortably contemporary ambience and menu. The petiscos (small dishes) included an interesting and tasty cream cheese, walnuts and savoury jam combo; an okay ceviche, and an exceptional scrambled eggs with chouriço. The desserts consisted of a crumble which came with a glass of brandy, a feature which didn’t help with the woozy situation. 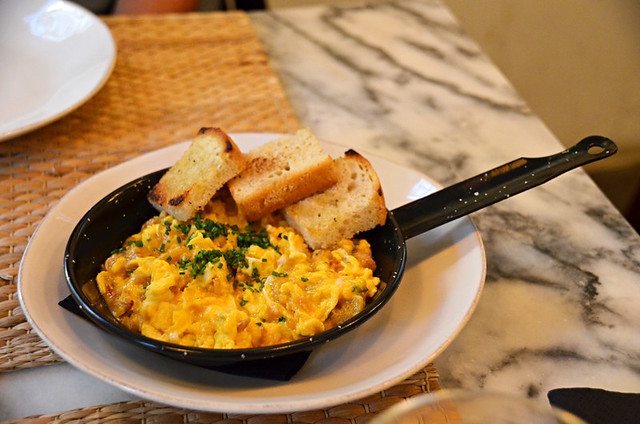 Peru and pisco sours
Last time we were in Dragon Square (Martim Moniz) on the edge of Mouraria we were on our way to a newly opened Fado house. It was dark and there were no other tourists around as the area was still one which most visitors avoided. That’s all changed, now there’s a healthy spattering of visitors mixing with locals at the stalls selling world cuisines. On an easy Sunday lunchtime we opted for a Peruvian/Mexican mix – pausa and chili con carne… and then spotted they also served pisco sours, a cocktail we’d fallen for in Chile. These were huge, strong and in danger of leading us down the road to a slurry Sunday afternoon. 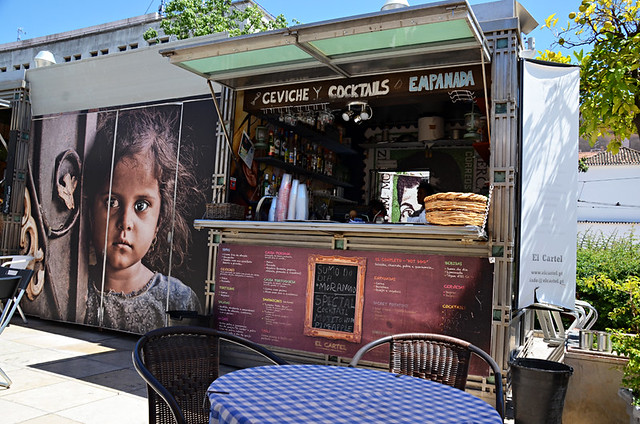 The art of dining
Chapito is an artistic cultural centre on a street leading to Castelo S. Jorge. The centre has a tapas terrace as well as a restaurant, both with superb sunset views across the Lisboa rooftops. There’s a winning combination of eclectic surroundings, sparkling views, and food as creative as the decór – peach gazpacho; fresh figs in a light sauce; a trio of fish and a melt in the mouth steak. On a trip which took in three cities (Lisbon, Porto and Coimbra) this was our favourite all round dining experience and at around €70 including wine, not as expensive as we’d anticipated. You can also buy voodoo dolls in its arty shop. 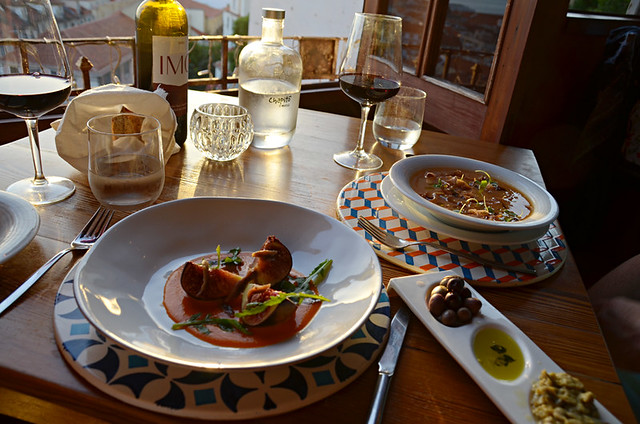 I am going to Goa
Back to basics for our final meal in Lisbon, Tentações de Goa located on a narrow backstreet just off Martim Moniz square. It was another tiny Mouraria restaurant with only a handful of tables. The food was simple Goan fare that was authentically delicious. Like many of the other small restaurants we’d eaten in, it was brimming with Mouraria’s vibrant and warm personality. 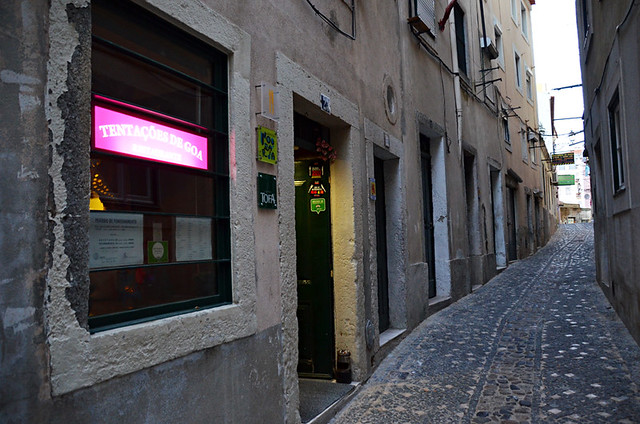 The truth is we could have eaten in any number of restaurants in Mouraria. There was the Nepalese near the apartment; the Cape Verde restaurant further along the road; the Pakistani restaurant beside the Goan place we ate at; the traditional Portuguese joint where there was always someone strumming a guitar; the restaurant which always had a live band outside and where diners ate their food sitting on the steps… and so on. 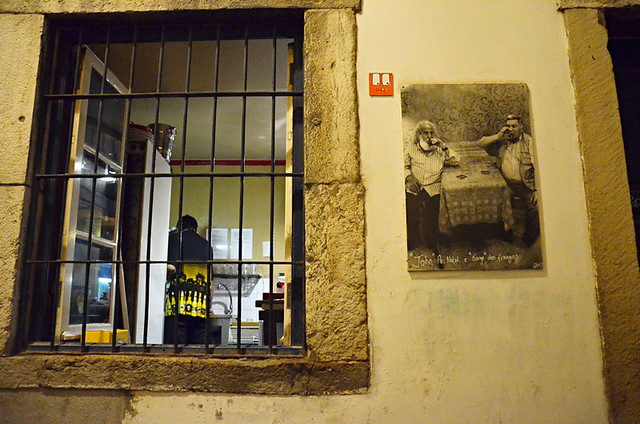 One of the things that makes eating in Mouraria such an enjoyable experience isn’t just that the food is very varied and mostly delicious, it’s that you feel you’re eating in restaurants which are a vital part of what is a rather special community. It’s a factor which adds that little bit extra flavour.