Whenever we travel anywhere I always have a tick list of the local dishes I want to get my teeth into. Within a few hours of strolling the hot, busy and gritty but artistic streets of Chile’s capital, Santiago, we’d notched up four Chilean culinary classics from my list. 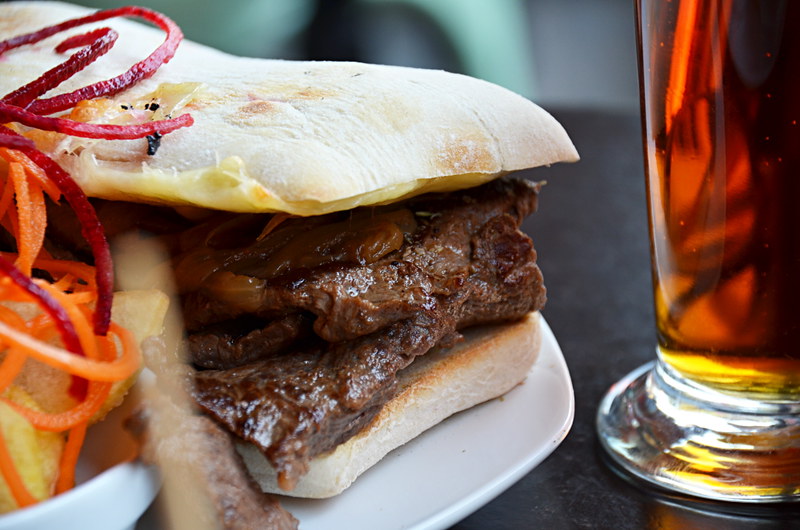 Meaty sandwiches are big in Chile, in a couple of senses – they’re popular and they’re huge. On the shady terrace of the funky Cosmopolitan restaurant in the equally funky Patio Bellavista complex, just off bustling downtown Pio Nono, Andy tried an Argentinian whilst I went for an ‘a la pobre’. Costing the equivalent of ten Euros, it seemed a hell of a lot to pay for a sandwich. When a forklift truck rolled up to the table carrying two bread containers packed with meat and accompanied by chunky chips big enough to act as chocks for a Dreamliner we realised the price tag was actually quite good value.
The classic Chilean sandwich is a beef and cheese mountain called Barros Luco. We tried one of these in La Cocina de Sole, a snack bar set in a couple of colourful, converted old buses in Villa Cerro Castillo, the buses were the highlight of a one horse town without the horse. 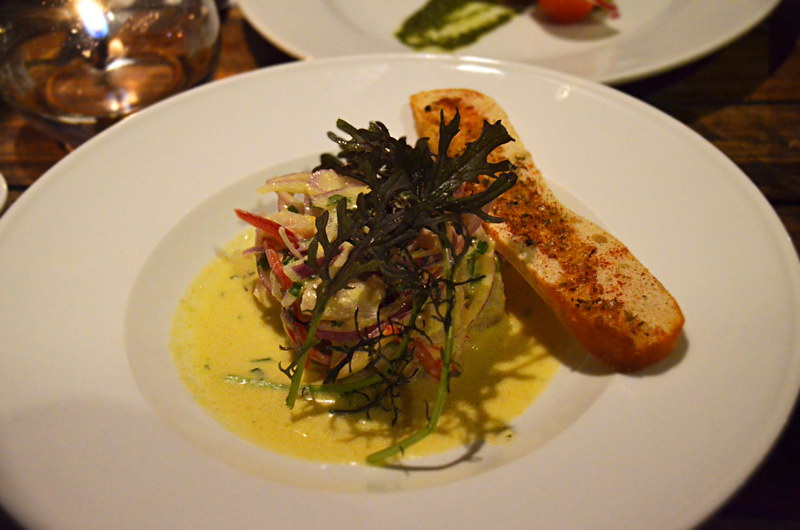 Our first dinner in Chile was in another downtown area of Santiago, the hip and happening Lastarria district, a mini maze of arty, colonial streets with far too many good looking restaurants to chose from. In a cul de sac bathed in golden lamplight we found ourselves surrounded by a troop of menus, each kitted out with the sort of gastronomic weaponry to ensure we’d surrender quickly. We chose Casa Lastarria simply because its blackboard showed it served the Chilean dishes we wanted to savour. Ceviche (fish marinaded in lemon juice, olive oil, onion, cucumber, chilli) was ordered before the waitress could draw her notepad. Good ceviche means a party of zingy, fresh flavours in your mouth and Casa Lastarria serves a fiesta-starting ceviche. 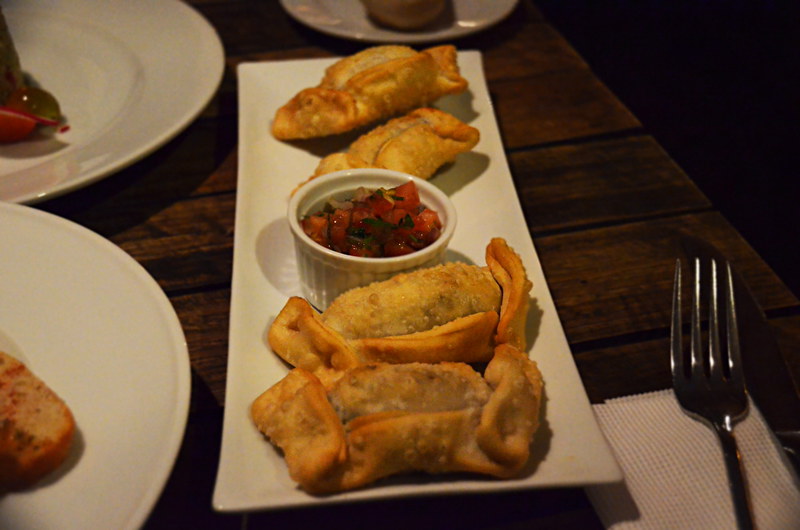 I’m a pastry fan, so empanadas (savoury, crescent shaped little pies) were high on my ‘to try’ list. The Spanish version invariably disappoints me but I’d been blown away by Argentinian ones at a music festival earlier in the year. The Chilean empanadas de pino de res, also at Casa Lastarria, were of a similar ilk, packed with a tasty, savoury filling. Casa Lastarria also served prawn and cheese empanadas which I’m still kicking myself for not trying there and then as empanada munching opportunities became quite scarce once we left the city and took to the Carretera Austral. 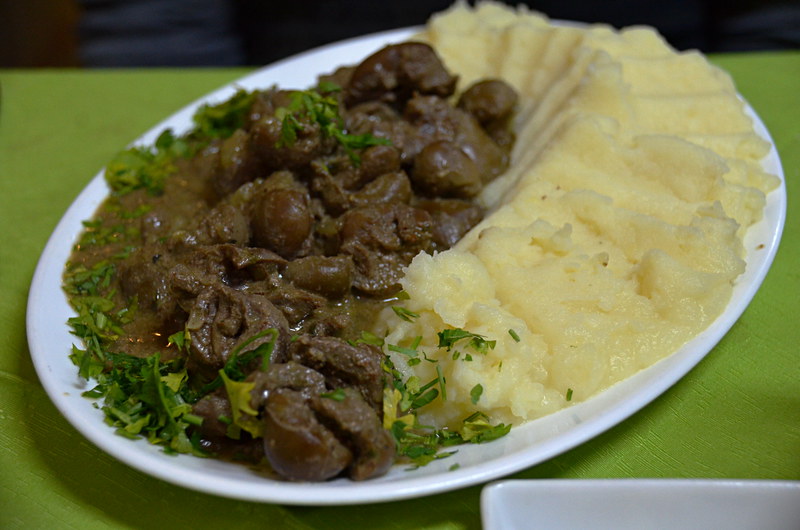 We quickly discovered restaurants in towns along the Carretera Austral were simple affairs with concise basic menus which generally featured mostly meat and a couple of fish dishes ‘con agregado’. This basically means with a choice of rice, French fries, mash potato, boiled potato, sautéed potato or salad. At the ‘in’ restaurant in Coyhaique, the Casino de Bomberos (the fire station) we had our first introduction to ‘con agregado’.  We chomped our way through a plate-sized pork fillet with ham, egg and a landslide of French fries as well as an enormous plate, one half of which was covered by kidney in a sherry sauce and the other by mash potato. Simple fare but most enjoyable. 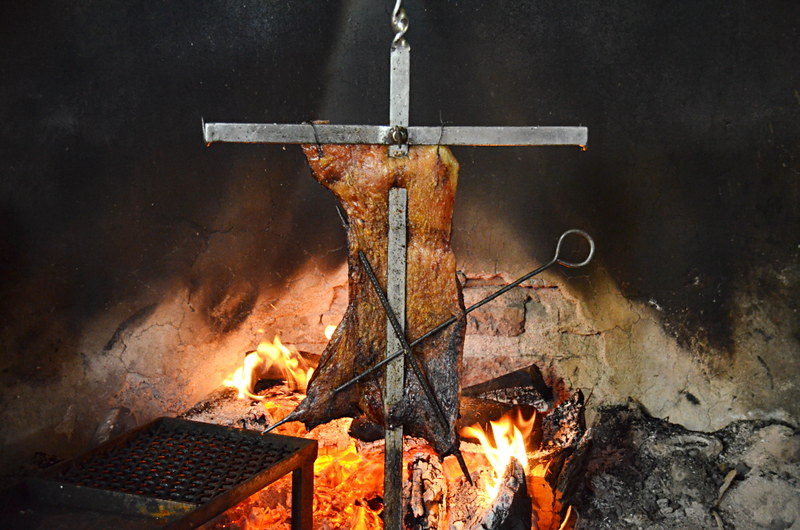 Another couple of entries were ticked off the list at a guincho outside of Coyhaique. Guinchos are rustic buildings used for social gatherings. At a particularly cosy guincho on an estancia (rancj) belonging to condor guide Alejandro we were treated to traditional cordero asado, lamb which is crucified and slowly roasted over coals, making it embarrassingly good. Embarrassing because of the barrage of ‘mmm’ noises which accompanied every bite. 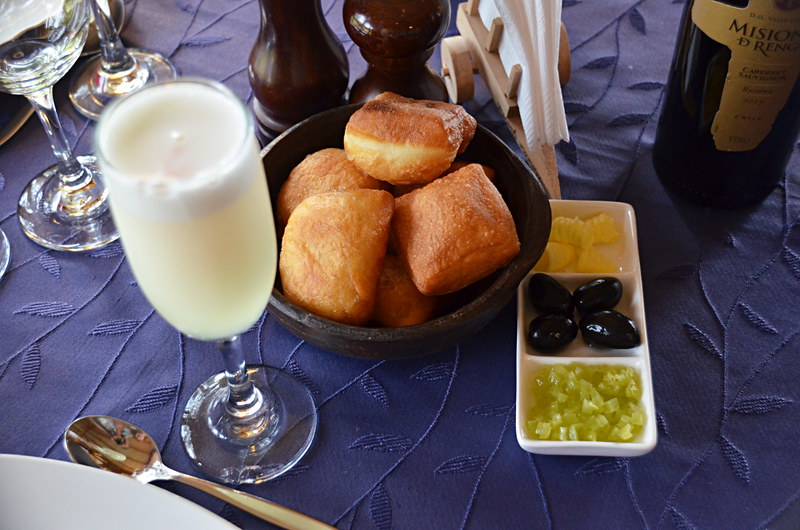 Also accompanying the cordero were the super pillows or, more accurately, sopaipillas; golden wonders that are a cross between pastry and fried bread and which are impossible to resist whether served on their own or with pebre, a spicy salsa. At the Mirador de Guadal we overdosed on sopaipilla appetisers, each packed to capacity with moreish pebre. 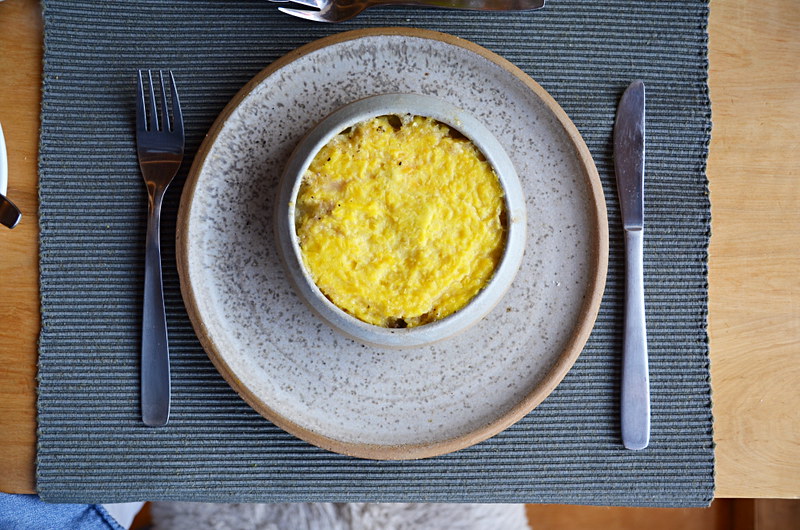 The Chilean dish I’d been most looking forward to trying was pastel de choclo, a cornmeal pie whose filling can change slightly from place to place. Generally, ingredients can include chicken, beef, olives, onion, garlic, hard boiled egg, herbs and seasoning. The first time we had it was at the Bordebaker Lodge in Patagonia where ingredients included both beef and chicken. The second time was at the Mirador de Guadal where a traditional Chilean topping was offered i.e. sugar sprinkled on the cornmeal crust. 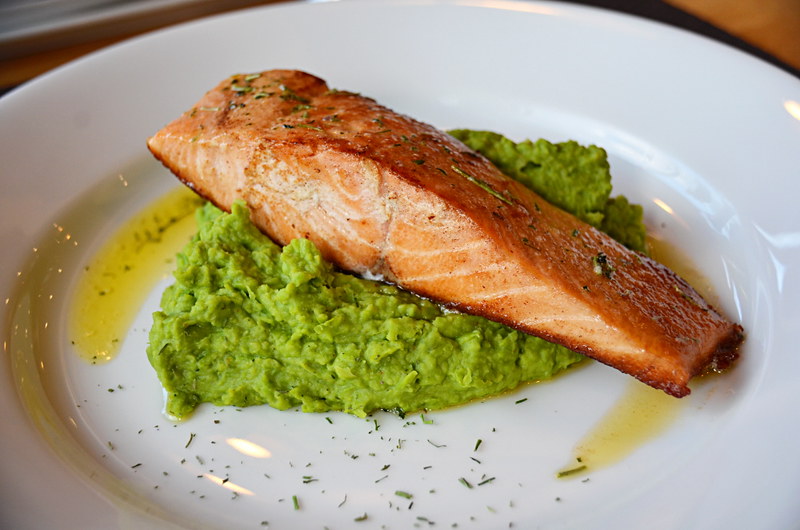 In a land of country-sized freshwater lakes you’d expect fish to feature quite highly. Even though salmon and trout were only introduced to Chile’s lakes in the 19th century, Chile is now one of the biggest producers of salmon in the world. Subsequently salmon is common on menus. Occasionally what turns up on your plate might actually be trout as salmon can be used as the umbrella term for both. One of the best meals we ate in Chile consisted of salmon on a mushy pea mountain at the Bordebaker Lodge in Patagonia; a surprisingly good pairing. 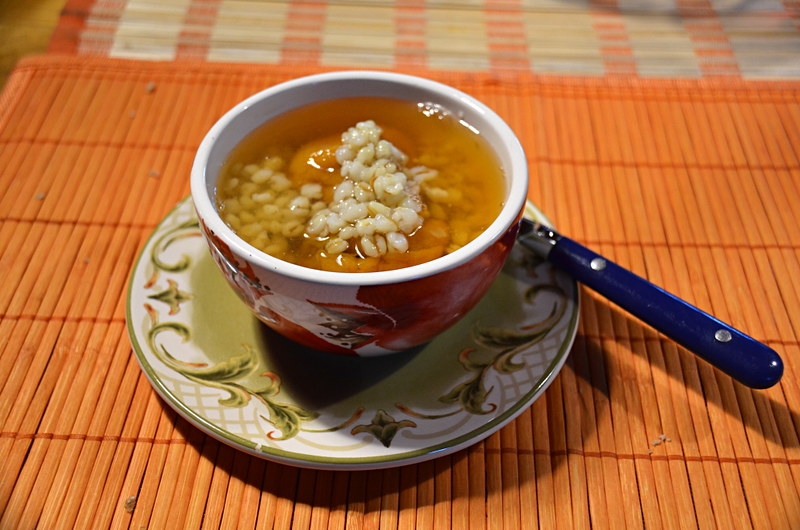 On the few occasions meals didn’t include potatoes or rice, they were served with boiled wheat grain called mote; an interesting and tasty alternative. The one time when I was less keen was when it came in the form of mote con huesillo, a cross between a summer drink and a pudding consisting of mote, dried peaches and syrupy water. 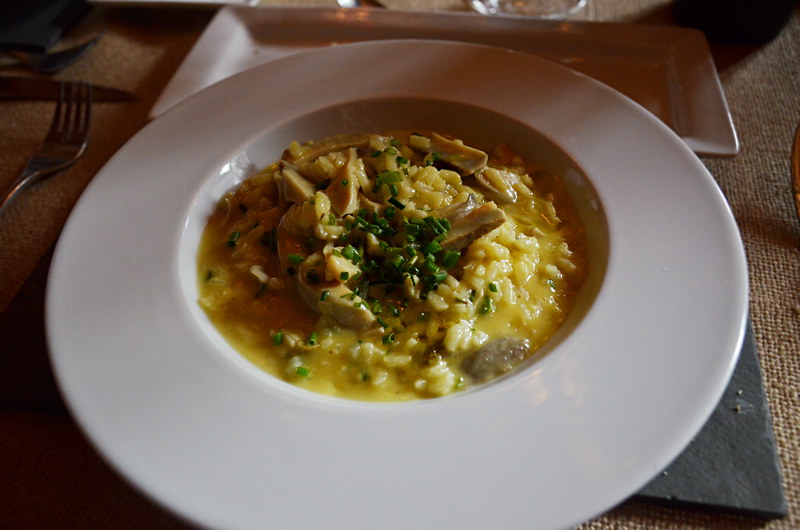 We didn’t know anything about locos until they were mentioned by Christina, Alejandro’s wife, at the guincho in Coyhaque. We were able to deduce they were a type of seafood but not exactly which one. It wasn’t until a locos risotto was placed in front of us at the Entre Hielos Lodge in Tortel, where locos are a speciality, that we found out they were a type of abalone considered somewhat of a delicacy. As a seafood lover anyway, it only took a couple of mouthfuls before I was loco for locos. 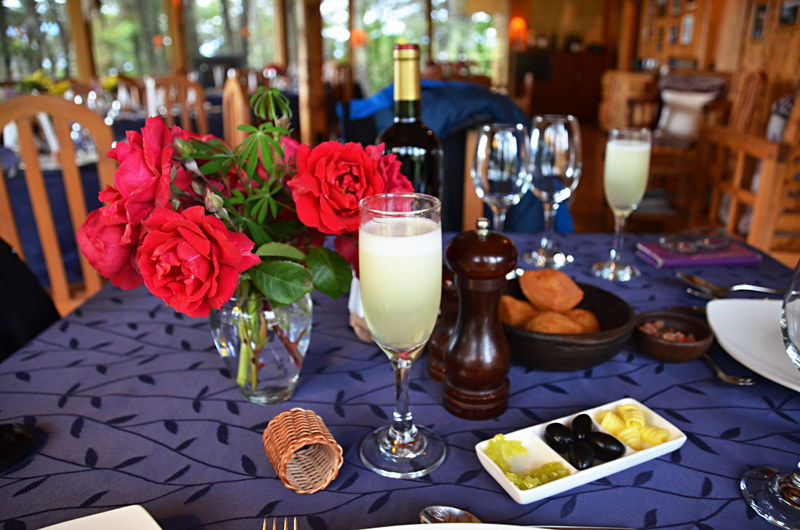 Although not food, a special mention must go to pisco sour, a Chilean/Peruvian aperitif/cocktail with the kick of a mutinous mule. This creamy, minty looking blend of lemon juice, egg white, pisco and syrup sounds innocent enough, but by the time we were halfway through our first glass of it at Casa Lastarria in Santiago we were both three sheets to the wind. It didn’t stop us ordering pisco sour wherever we went though. Addictively potent.

As a rule we found that once we left Santiago and took to the Carretera Austral, the most interesting culinary combinations were to be found in lodges rather than in restaurants where the food was good but just not very adventurous.