My least favourite part of a meal is dessert.

At this point Andy rolls her eyes and says “you say that, but you always wolf it down when we have a pud.”

That’s true as well. I love good puddings. The thing about dessert menus is in some countries they can swing from the divine to the deadly dull, especially in traditional restaurants. You never know which is going to show up. Portugal is a classic example of what I mean. This is a country whose dessert menus are dominated by puddings made from left over egg yolks after nuns have used the whites to starch their wimples. Conventual desserts have novelty value when first encountered, but after numerous occasions discovering all those desserts with odd little names (nun’s belly, lard from heaven etc.) consist of the holy trio of egg yolks, sugar, and cinnamon, it all gets a bit samey. But then, deliciously fruity crumbles, and dreamy, creamy cheesecakes can turn up on a lot of Portuguese menus as well, just to confound expectations.

My least favourite part of a meal is dessert… unless there is something which awakens the sweet-toothed child that slumbers within. And there regularly is, no matter where we travel around Europe. 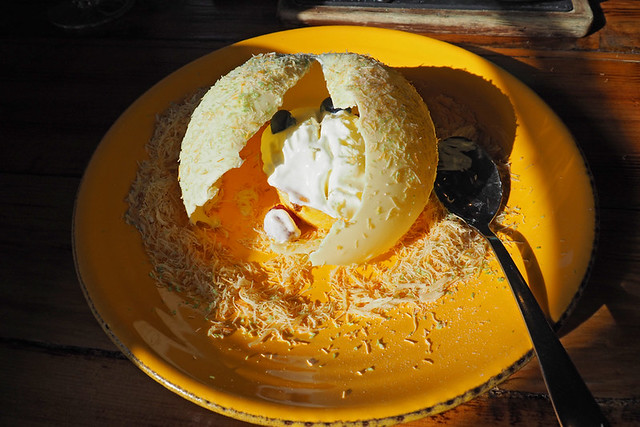 White chocolate egg, Italy and Portugal
The dessert menu at Mundet, located in the non-touristy town of Seixal on the other side of the Tagus from Lisbon, is inspired by Alice Through the Looking Glass, and does feature goodies suitable for a wonderland setting. Humpty Dumpty involved a white chocolate egg enclosing Mundet’s take on a traditional sponge cake called pão de ló. It was fun, lip-licking tasty, and reminded us of another white chocolate egg dessert which caused a WOW moment, as it was dropped from above diners’ heads to smash into pieces on their plates. That one was at the two star Michelin restaurant Piccolo Lago on the banks of Lake Mergozzo in Italy. All night we wondered why there were sudden outbursts of laughter at tables around the restaurant, until a huge,white chocolate egg whizzed past Andy’s head to explode on her plate, revealing an anarchic splodge of raspberries with banana and caramel ice cream. 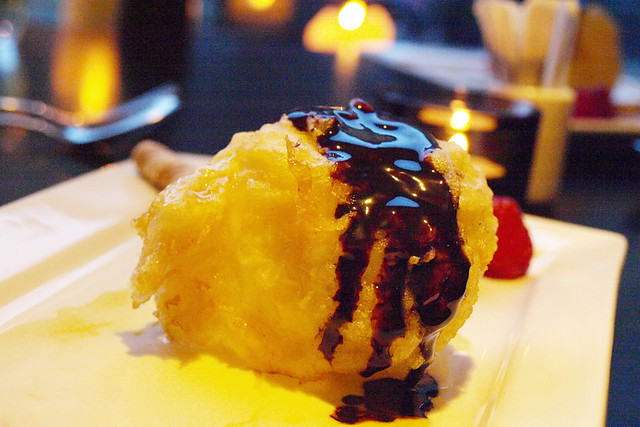 Deep-fried ice cream, Glasgow
It is true, the west of Scotland is deep-fried Nirvana – a land of battered sausages and hardened arteries. As teenagers we never thought twice about ordering deep-fried pizzas and Scotch pies from the local chippie after a night on the Tennents. But deep-fried ice cream at Oriental fusion restaurant Opium on Hope Street was a first for me. It consisted of a large ball of vanilla ice cream enclosed in melt-in-the-mouth golden, crispy, batter, drizzled with chocolate sauce and honey; the epitome of sinful dining. 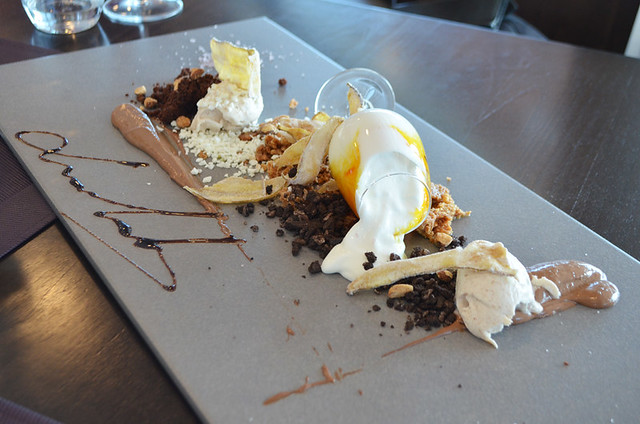 Salt and caramel, La Palma
The first time we knowingly tasted salted caramel was at Jardín de la Sal on the volcanic badlands at fiery Fuencaliente, the site of a brace of volcanic eruptions, the last being in 1971. The restaurant specialises in giving traditional dishes a contemporary reboot. The signature dessert dish (literary as the chef actually signed it using caramel) was as wildly surreal as the surrounding terrain – featuring an eruption of chocolate mousse; chocolate cake; almond ice cream; broken Oreos; dried banana; toasted almonds; passion fruit syrup; yoghurt, and goat’s cheese foam. The salt used to elevate the caramel to the culinary heavens was from the salt pans outside the restaurant. Caramel desserts without salt just don’t make the grade now. 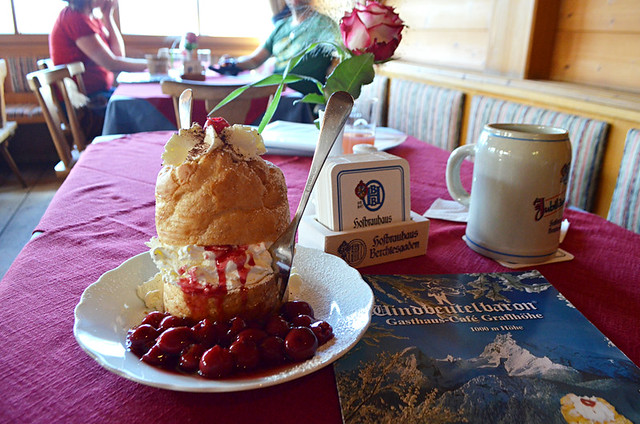 Mountain of cream, Bavaria
There’s no split personality issues with desserts in Germany. This is the country which gave the world the Schwarzwälder Kirschtorte – Black Forest gateau. The problem in Germany is trying to not eat too many delicious desserts. Sometimes a mission impossible. We don’t like to eat a hefty lunch mid-hike, but the desserts at Windbeutelbaron (a mountain lodge en route to the infamous Eagle’s Nest above Berchtesgaden) tempted us right off that path. Their speciality is a puff pastry, fresh cream concoction known as Der Windbeutel which is inspired by the various peaks of the Watzmann Mountains forming the panoramic view from the lodge’s terrace. Each cake is gigantic. We showed some restraint by sharing one, whereas most other customers devoured a mountain to themselves. 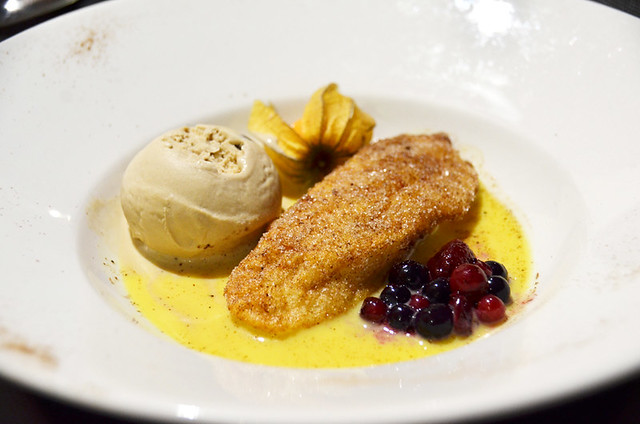 Spanish toast in Extremadura
If you like French toast, you’ll love torrijas, the improved Spanish version. The really good ones are as light as air, despite some looking the size of a brick. I could mention a few places where we’ve eaten outstanding examples, but the torrija cacereña at El 13 de San Anton in historic Cáceres gets pride of place as we enjoyed such a good evening there, plus the torrija was accompanied by English cream, coffee ice cream, and Licor de bellota. 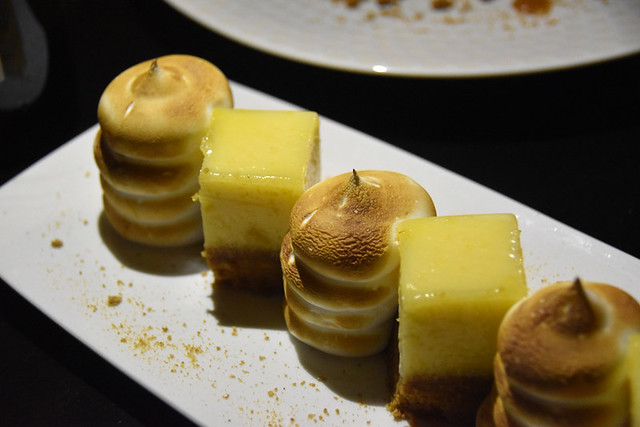 Deconstructed classic in Drôme Provençale
According to some online sources, the USA is responsible for the gift that is lemon meringue pie. I’m afraid I’m not buying that story. Other sources attribute it to Victorian England; although nearly everybody accepts a form of lemon tart has been around since way before Columbus crossed the ocean blue. Meringue is a French word, so there’s definitely some French influence. It’s one of my favourite desserts, and when spotted on a menu every other option becomes a blur. The most memorable in recent years was a deconstructed version served in the leafy courtyard of L’entre2, a charmer of a restaurant in a typically Provençal stone house just outside the old centre of Saint-Paul-Trois-Châteaux. 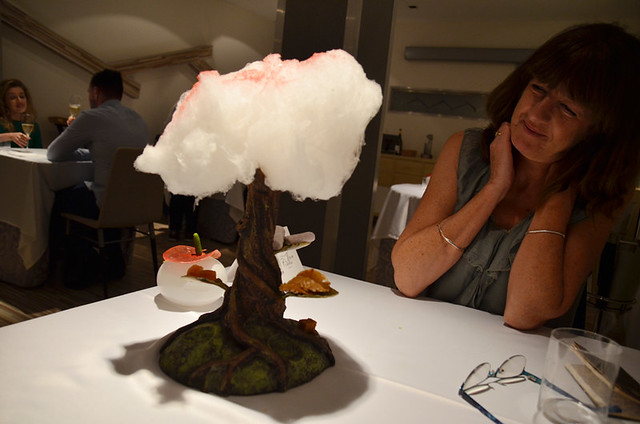 Pure pantomime, Tenerife
It takes some talent when a chef can please the taste-buds and put a smile on your face when you’re suffering from the flu. We’d booked Michelin star El Rincón de Juan Carlos in Los Gigantes months in advance and had spent all day in bed, sleeping, sweating, and shivering etc. after succumbing to some bug picked up thanks to the poor hygienic habits of too many of the guests at a resort hotel we’d stayed at. But there was no way we were going to miss a meal at our favourite restaurant in the Canary Islands. One of the things we enjoy about avant-garde dining is the sense of theatre and fun (see white egg previously). Chef Juan Carlos ended another triumph of a taster menu with a flight of pure whimsy in the shape of a bonsai-sized candyfloss tree. Magical. 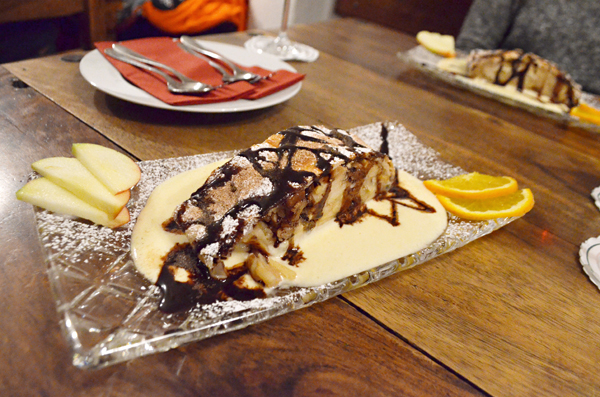 Awesome apples, Austria
It’s unfair to pick out one restaurant when it comes to apple strudel as I don’t remember having a bad one anywhere in Germany, Austria, Croatia, or Slovenia; all countries where the dish crops up all the time on dessert menus. We’ve flaked their pastries in roadside cafes, alpine lodges, farmhouses, and bustling city centres. Purely to choose one to illustrate, I’ve opted for Gasthaus Zum Kranz in Freiburg. It was a cosy, convivial, traditional restaurant in the Altstadt whose apple strudel in custard rounded off a tasty introduction this environmentally friendly city’s gastronomy. 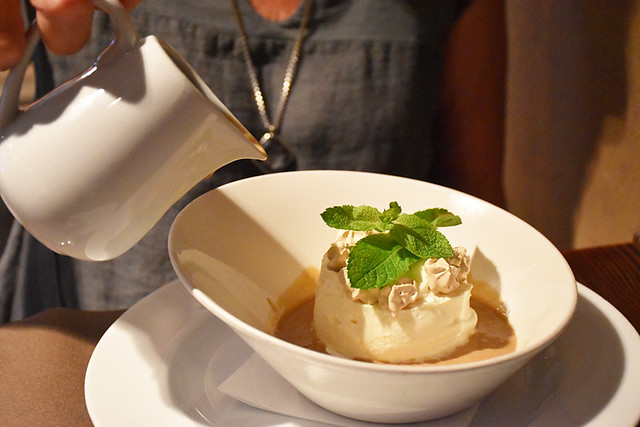 Hot and cold in Venice
We expected the gastronomic offerings in Venice to have suffered due to overtourism, just like we’d previously experienced in places like Dubrovnik. We ended up pleasantly surprised both by the quality of the food we ate and the fact that after dark there were nowhere near as many tourists filling the streets. On sultry summer nights good restaurants were far easier to get into than some other popular European cities. Our visit was topped off by a delight of a dessert at Impronta Cafe (not a cafe at all) in the arty Dorsoduro district – mascarpone cheese custard on a meringue waffle with lashings of hot liquorice and star anise sauce. The Italians simply do good food like nobody else. 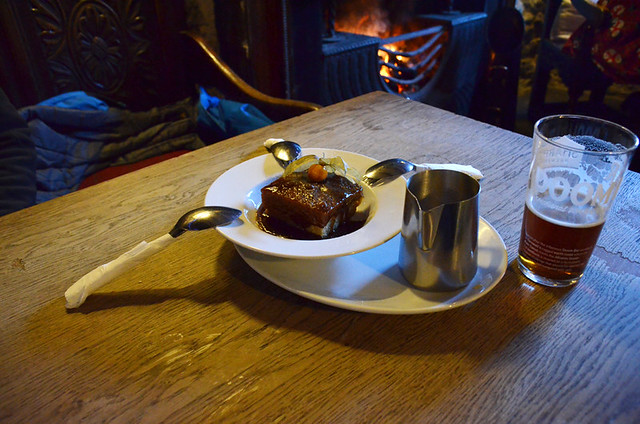 Hard to beat puds, England
I’m biased, but nowhere in Europe does puds quite as good as Britain. And yet I struggled to come up with a standout one from England. Not England’s fault, it’s just that we don’t spend much time there and when we do it’s usually with family, so desserts don’t often figure. Then I remembered a December day a couple of years ago, sitting by the fire in Yo Olde Nags Head in Castleton with snowy scenes outside the window, good company at my side, a craft ale in my hand, and a bowl with sticky toffee pudding in caramel sauce on the table in front of me. These are the sort of ingredients that make hearty, British desserts difficult to top.

Located opposite the Playa Martiánez beach and just a stride away from the lovely Lago Martiánez swimming pool complex, the recently refurbished four star Beatriz Atlantis is a comfortable, modern hotel on the sea front in Puerto de la Cruz. […]

The Corpus Christi flower carpets in la Orotava attract visitors from all over the globe, mainly to see the town’s record-breaking sand tapestry… […]