Monte Isola – a reminder that there are so many beautiful places out there whose names we have still to discover.

We’d never heard of Monte Isola before even though it is the biggest island lake in Europe. Mind you, we’d never heard of Lake Iseo, the exquisite lagoon on which it stands, either. And yet here they both are, bombarding our eyes with their overwhelming beauty. 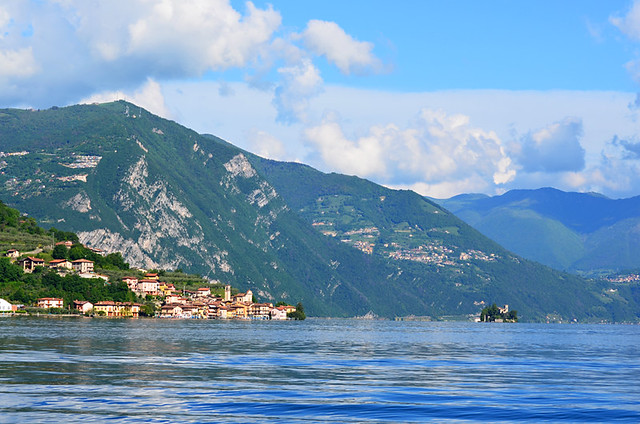 A short and vista rich ferry ride from Sale Marasino and we find ourselves amidst fishermen’s houses in pretty Carzano. The plan was to climb to the 17th century church of Santuario Ceriola where there are 360 degree views of the island and Lake Iseo. But it’s a hazy day. A climb to another sanctuary the previous day had resulted in teasing disappointment – grey vistas that were cruel enough to give the merest hint of just how spectacular the views would be in clear weather. We aren’t keen for a repeat performance.

Plus, we are intrigued by the towns dotted around the island. Who would live in a place like this? A road circumnavigates Monte Isola, providing a convenient walking route. The blurb says there are no cars apart from those belonging to the priest, the doctor and the mayor; we figure we won’t have to worry about too much traffic.

About that no cars thing, it’s a wee bit exaggerated… unless the doctor, mayor and priest have a fleet each which are used by their extended families. There aren’t many cars, but we soon discover there are more than is often claimed. 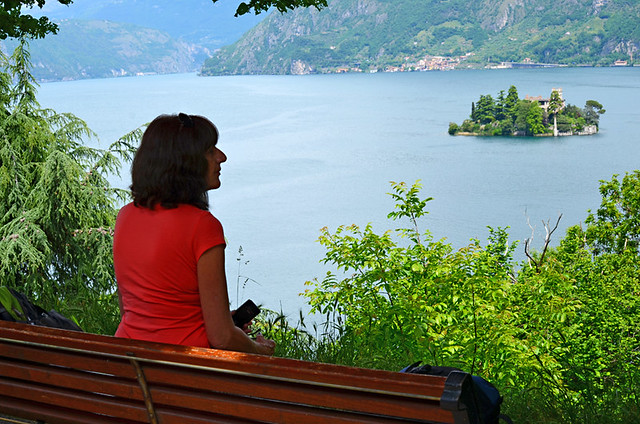 Progress isn’t quick, the views are just too distracting. Why Lake Iseo remains one of the lesser known of the Italian Lakes is a mystery.
As if the views of emerald mountains, petrol waters and pastel, lakeside villages surrounding us aren’t enough, shortly after we leave Carzano we find ourselves at a bench overlooking a peach of a tiny island. Isola di Loreta is believed to have been the location of a monastery in the 18th century. But that’s long gone, now it’s privately owned and the house filling its tiny surface was built in 1902.

The first town we reach is Siviano. A road leads to its harbour but we stay in the upper town. It’s surprisingly bustling with narrow streets, real shops (not something that has proved easy to find in some lakeside towns) and a rather grand church. 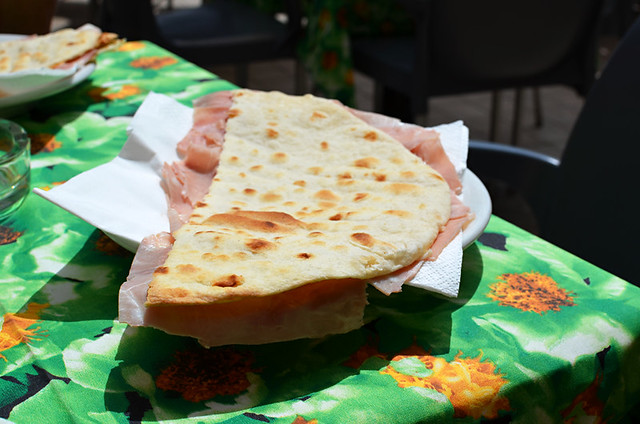 Bar Tina looks like a good place to pick up a snack. Initially I order a couple of paninis but then I spot a local tucking into a folded over flatbread and ask what it is. It’s a piadine and it looks good. I order two filled with ham and cheese to take away. Then we spot Tina’s has an outside terrace with pretty fine views across Lake Iseo, so we decide to ‘eat in’ instead. Tina must think we’re terribly indecisive.

The road hugs the hillside as it continues around the island. The haze has dissipated and the sun accompanies us as we stroll. There are no regrets about not walking to Santuario Ceriola. This is the sort of walk that makes life seem very good. We pass gnarled vines and silver olive trees, hamlets with huge wooden casks, and a poignant war memorial beside an abandoned doctor’s house. As well as knock-out views, there are interesting little curiosities all along the route. 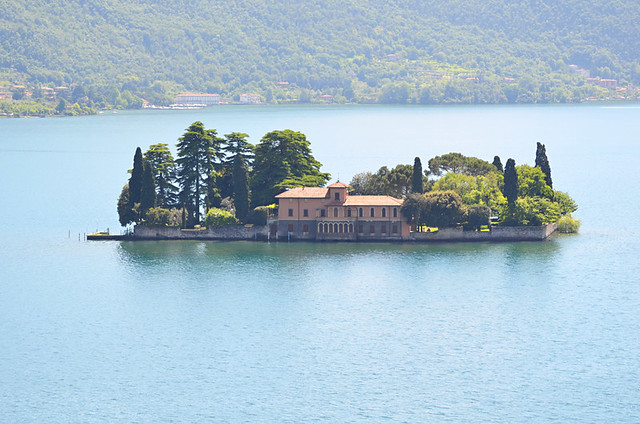 As we reach the southern side of the island we see another small island, Isola di San Paolo. Once upon a time monks and fishermen lived on it but now it is also privately owned. It’s even more beautiful than Isola di Loreta. We decide we want to live there.

The road descends to the lakeside and the small hamlet at Sensole where an avenue of olive trees curve around the lake. There’s rapid movement to our right and we turn from olives to see a young woman, sunbathing in her underwear, grab for her clothes. We wouldn’t have spotted her if she hadn’t moved. I guess it’s not a particularly busy route even though it’s the main road. The only other walkers are a family of waddling mallards. 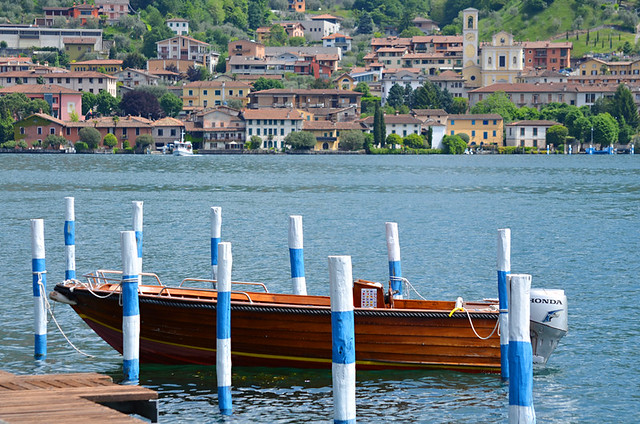 Not long after leaving Sensole we pass a small park, sardines drying in the sun (a lake speciality) and strangely beautiful bald cypress trees growing out of the water to enter Peschiera Maraglio, one of the island’s bigger fishing towns. We reward ourselves with a gelato in a café opposite nae’ts (local fishing boats) tied to blue and white poles. As we continue onwards through the town we pass a three-wheeled vehicle (apparently not a car) doubling as the fruit and veg shop. The ‘Place of Fish and Fishermen’ is ridiculously charming. 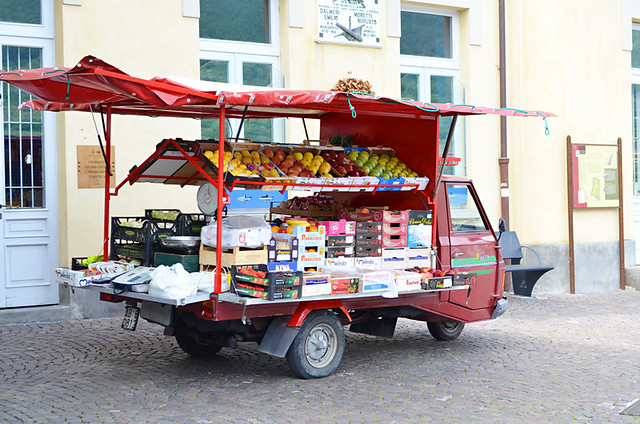 The final stage, between Peschiera Maraglio and Carzano, is least picturesque part of the route – there are only fabulous views of Lake Iseo instead of fabulous views combined with interesting curios. We’re clearly becoming too blasé.

A bar in Carzano lies opposite the small ferry port. It’s perfectly positioned so we can watch the progress of the ferry crossing from Sale Marasino whilst sinking a cool beer. On the next table a group of fishermen laugh at a male mallard who’s trying to get amorous with a female duck. She is having none of it. It’s an extremely amiable spot to relax. 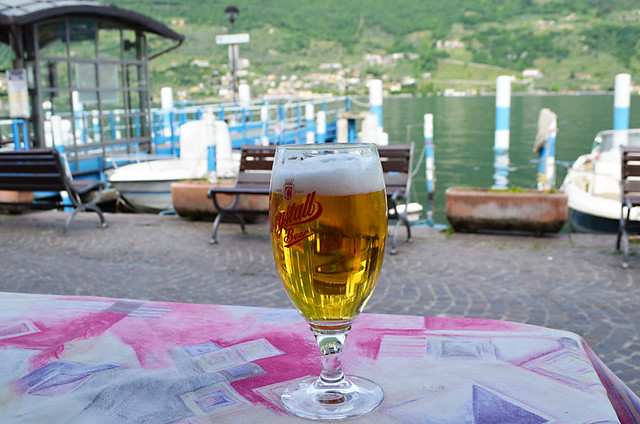 We’re in no rush to leave Monte Isola now that we’ve found it.

A different take on that Bros review

Last week, The Everywhereist’s review ridiculing the restaurant (not the 80s boy band) Bros in Lecce went viral on social media and was subsequently shared by numerous mainstream news publications. Instead of joining the vocal […]