Over the last twelve months we’ve visited all five of mainland Portugal’s regions, encountering a delightfully diverse gastronomy which has regularly surprised. In part one, we covered dishes which had left and impression in Porto and the north, central Portugal and also the Alentejo.

This time we get our teeth into Lisbon, Tagus Valley and The Algarve

Starters
Azeitão cheese: I’ve been impressed by the cheeses found throughout Portugal. Azeitão cheese, however, is a creamy aristocrat of cheeses. A hard rind keeps the pungent, runny cheese inside in its place until you’re ready to crack it open and dip your bread. It often arrives on the table as a couvert so you don’t even have to seek it out. 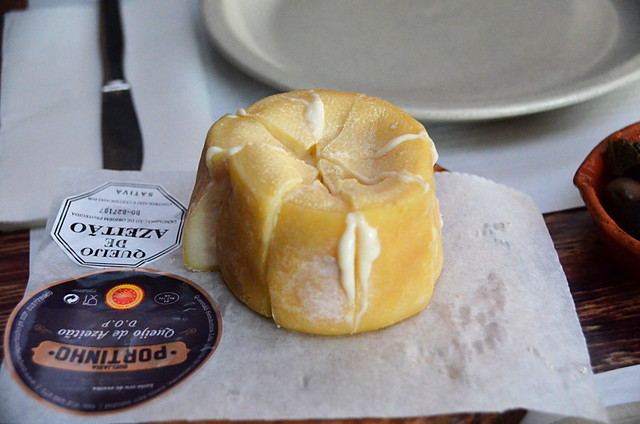 Canned fish: We had no idea canned fish in Portugal was of a far higher quality than canned fish in many other countries. Similarly, the flavoursome mackerel and sardine pates which often arrive as a couvert is unlike the comfortably bland fish pates I grew up with from British supermarkets. 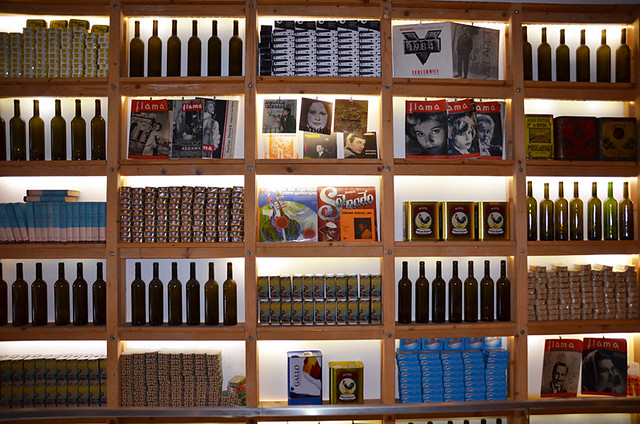 Mains
Choco Frito: We’ve become addicted to choco frito – battered, fried cuttlefish. I’ve eaten my fair share of cuttlefish in Spain, but none were like the choco frito served in fish restaurants in Setúbal. Tasty and tender when cooked properly, I now prefer it to calimari. 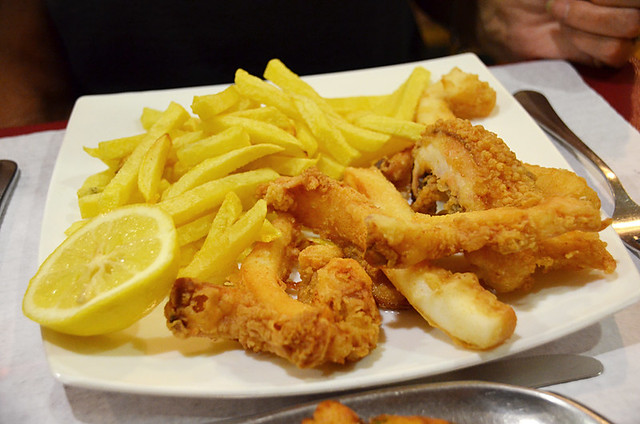 Colonial influences: Being great explorers, the Portuguese have influenced gastronomy in other countries across the world – Angola, Mozambique, Brazil, India, China, Japan. In return, those countries have also influenced Portuguese gastronomy. The Mouraria district in Lisbon is an ideal place to eat your way around world cuisines with a strong link to Portugal. 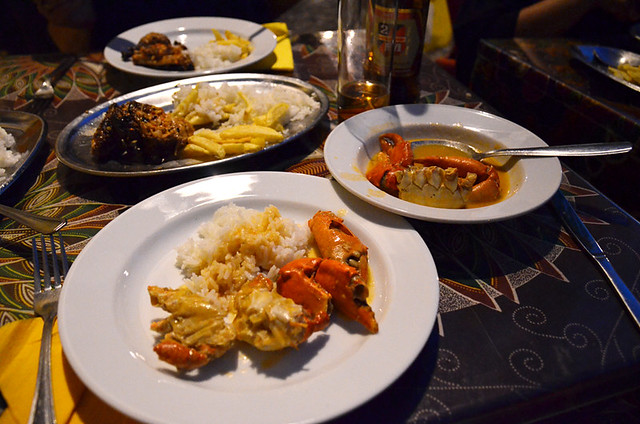 Desserts
Pastéis de Belém: Everyone knows these Portuguese custard tarts created by a baker from the nearby Mosteiro dos Jerónimos in 1837. Similar looking and tasting pastel de nata can be found all over Portugal, but the ones from Belém, made to a secret recipe, are the originals. You often get cheap deals in cafes for a coffee with a mini pastel de nata. 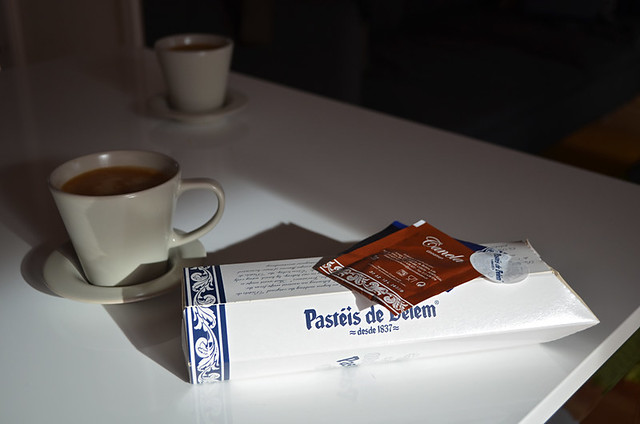 Tortas de Azeitão: Another eggy offering, this time from the other side of the Tagus. These are soft, tube-shaped tarts with a lemony, sugary sweet filling. Like the pasteis above they taste best when a sprinkling of cinnamon is involved. 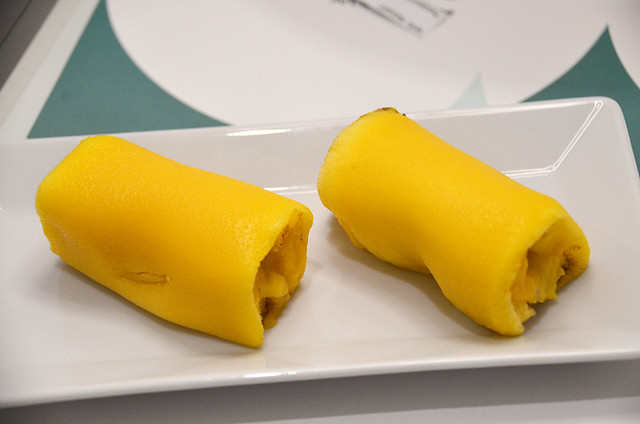 Snacks
Bifanas: On the face of it bifanas are just warm pork fillets in a roll; an attractive sounding snack in itself as far as I’m concerned. But two factors elevate bifanas to another level. The pork is seasoned so it should be on the spicy side, and the soft Portuguese rolls are a perfect match. They remind me of the ‘proper’ baker’s rolls from the Scottish island I grew up on. 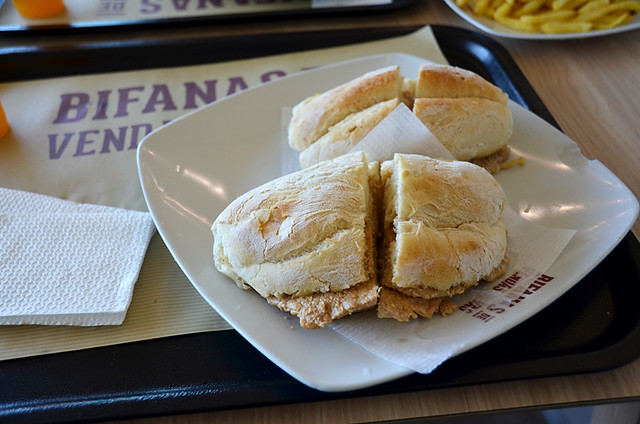 Drinks
Ginjinha: Popping into a ginginha bar for a shot of sticky, sour cherry liqueur is a Lisbon must. Even better is buying a glass from one of the women who sell it outside their houses in the narrow alleys of Alfama. It’s especially good when served in a chocolate glass… but that’s the posh way. 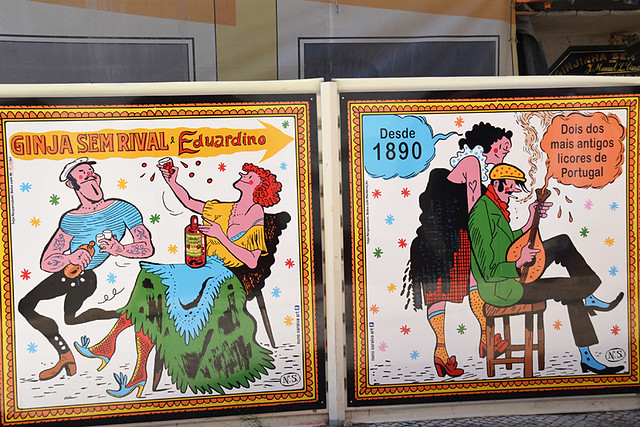 Moscatel: “If it’s not from Setúbal, it’s not proper Moscatel,” so an animated waiter in a fish restaurant informed us. All I know is it’s a citrusy, fruity, sweet drink that’s easy to drink and goes nicely with a sobremesa (dessert). 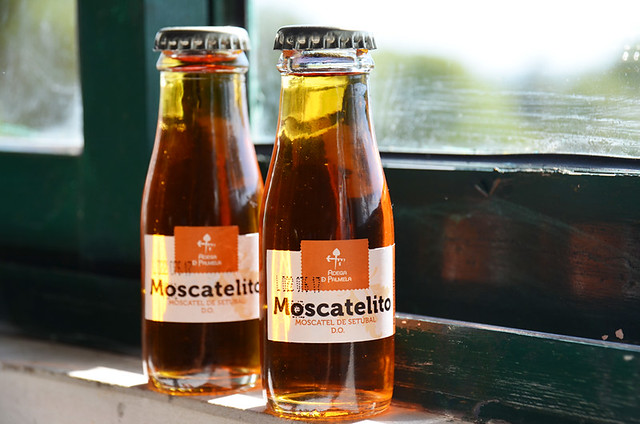 Mains
Cataplana: Unsurprisingly, seafood is popular in the Algarve. A rather snazzy way of serving a mix of marine goodies is cataplana (the name of the attractive copper pan the dish is served in). The design, thought to be originally Moorish, means the seafood stew inside is cooked evenly, keeping all the essential aromas trapped inside in the process. The shape is also handy for tying to your donkey’s saddlebag when its time to move on. 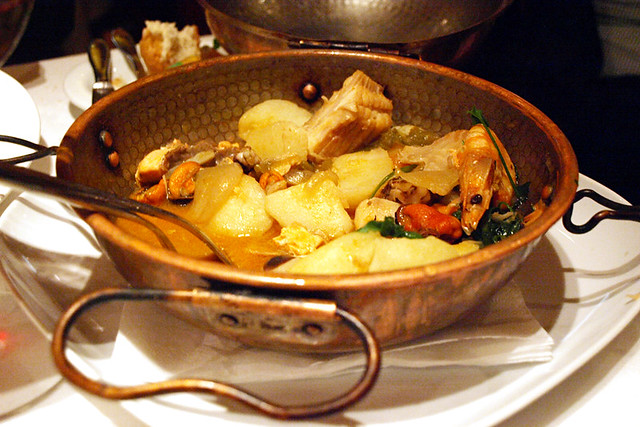 Frango no churrasco à portuguesa: Better known to many as chicken piri piri, barbecued chicken seasoned by spicy piri piri sauce. I’ve included it in the Algarve section as that’s the only area of Portugal where I’ve tried it so far. 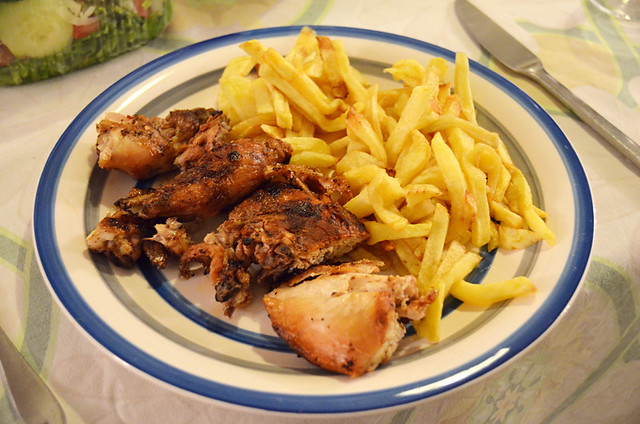 Drinks
Medronho: Or aguardente de medronho to give it its full name. This is firewater made using the fruit from strawberry trees. The stuff we’ve tried has been quite smooth, especially when compared with the likes of grappa or raki, but it’s all relative. We have an unopened bottle of medronho, bought not for the drink but because we liked the design. 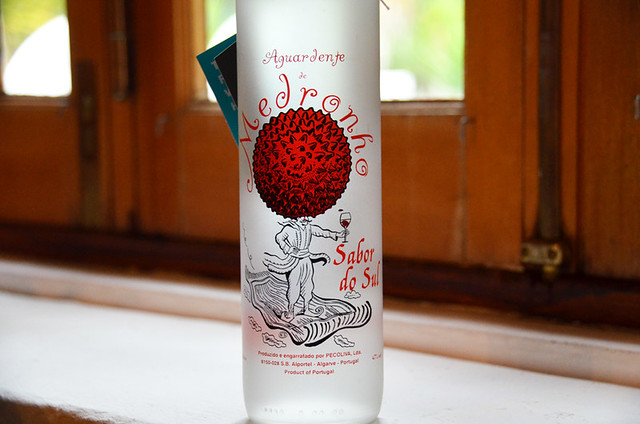 In our final look at Portuguese cuisine we’ll be covering pies, chamuças, vinho verde, silky smooth red wines, presunto, and other dishes we’ve enjoyed all across Portugal… not to mention snacks like home made chips and mutant toasties.

You’re not likely to accidentally stumble across Tasca da Esquina. It sits on a corner (hence the name) at Campo Ourique, a newish area of Lisbon built on… […]