Our visit to Fontvieille in Les Alpilles was a fleeting one, a pause between where we’d come from and where we were going.

The sky was moody, the town was wistfully quiet; its September song having been sung – the end of the season and many places closed until the tourists bloomed afresh in spring.

And yet on Fontvieille’s colourless, quiet lanes we were charmed enough to want to return. 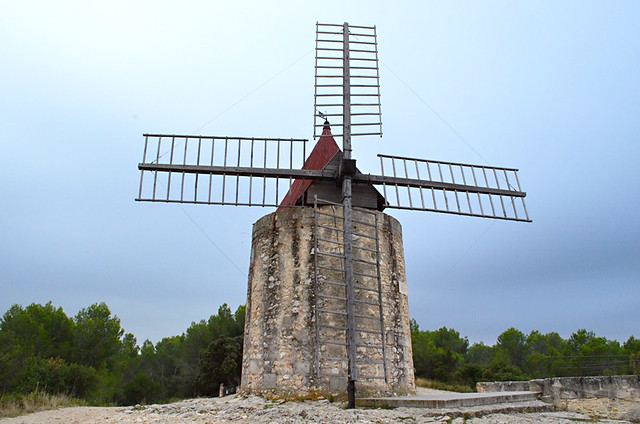 Its residents helped. From the moment we asked about the town in the tourist office we were greeted by enthusiastic suggestions. There was no tired, robotic reeling off from an overused script. The tourist officer’s enthusiasm for her town was infectious and had us setting off with jauntiness in our steps to seek Daudet’s Windmill and anyone else’s windmill we happened to come across.

Alphonse Daudet was a 19th century novelist who was famous for chronicling tales of small town life in Provence. He spent a lot of time in Fontvieille and it’s claimed some of his characters were inspired by the Fontvieille townsfolk. There are little plaques all around the town referencing various landmarks that featured in Daudet’s tales.

We met nobody else on our route to the windmills save for a woman carrying a crumpled duvet in a plastic carrier bag. Although she was quite well dressed we wondered if she’d been sleeping in the forest. 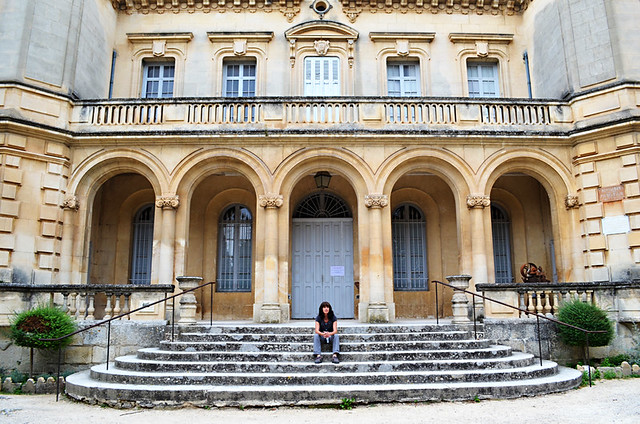 It didn’t matter, it was a pretty spot to linger awhile and its grandness was toned down by a small house whose wall had a simple and silly quote from one of Daudet’s stories about a farmer who locks a wandering nanny goat in a shed but leaves the window open. 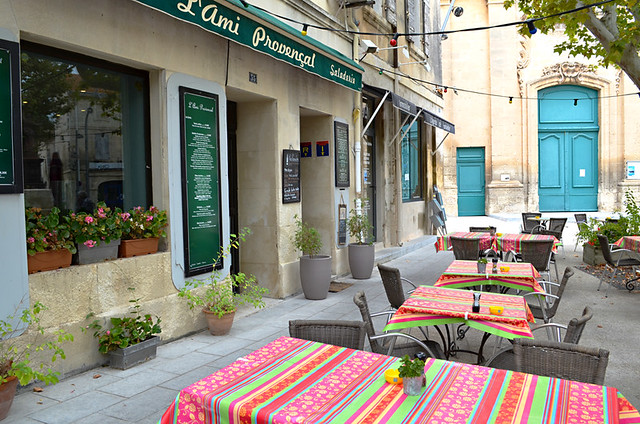 The windmill route led us back to the centre of town, via one of the cheesiest barber signs I’ve ever seen (think Liberace having his face stroked), and a small square whose demure appearance was livened up by the jazzy patterns on the tables of a typical French café.

Despite the town being asleep/hibernating I became aware of a couple watching me intently as I tried in vain to take a photo of a statue in the centre of the square that wouldn’t look as though the world was about to end.

They didn’t speak English, my French is about the level of the characters in ‘Allo’Allo! – despite this we ‘chatted’ for about ten minutes.

I got the gist but not the details. Something to do with love, liberty and justice and Fontvieille being somehow of vital importance in the quest to achieve all three. 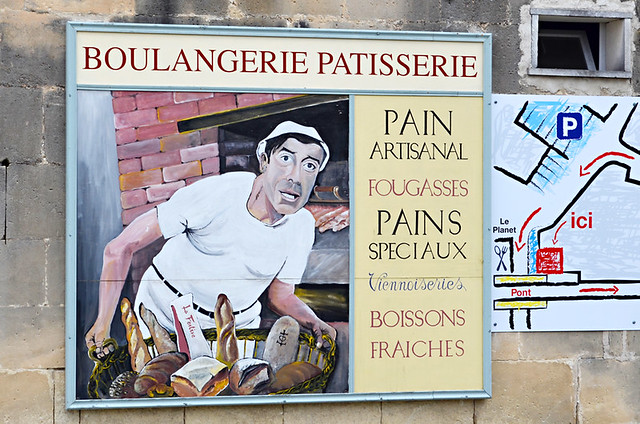 We left them and continued to explore more of Fontvieille, passing first a ‘Cave à Vin’, where we’d have partaken of a tipple had it not been shut, and then a boulangerie whose wonderful sign featured a baker who looked as though he may be suffering from constipation.

Once a place of authority where taxes were extracted and justice was meted out – you can probably read flogged into that – the Bishop’s Tower ended up belonging to a painter; much more in line with the artistic vibe that flowed creatively through the town. 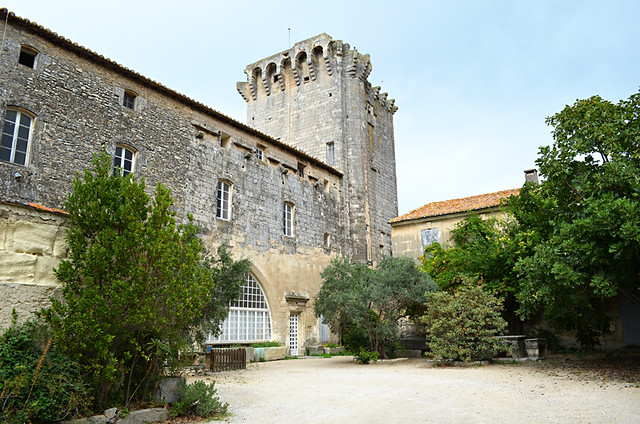 Finally, our trail led us to the reason a settlement sprung up in these parts, the old spring – Fontvieille. Unassuming is a bit of an understatement as it was housed in a stone shed.

Nearby was the communal wash area – the grand lavoir. Serene on a September afternoon. Serene apart from the high pitched whine of a mosquito who took a chunk out of my back.

Quiet it may have been but the air was alive with the ghosts of the women who had once laughed, gossiped and washed here. 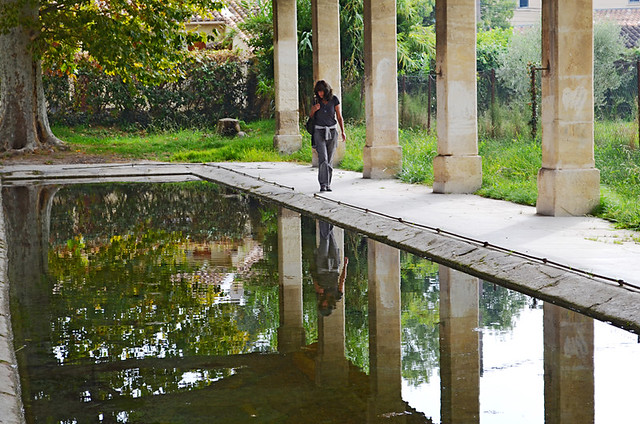 Like Fontvieille itself, there was a magnetic quality to the grand lavoir. We’d stayed in the town longer than planned and we were running late for reaching our reason for passing through – an art gallery in an underground quarry.

With reluctance we dragged ourselves away from the old spring.

If a town can captivate when the weather is weary and many things are closed, it’s intriguing to imagine what it must be like when it bursts into life.

Without hesitation, a small, round parcel of chestnut leaves tied with raffia was placed in our hands and we were told to give it just the gentlest of squeezes. The sides yielded effortlessly with a squidgy promise of runny insides. […]