A yearning to swish my way down powdery slopes on sleek sticks was ignited in 1970 whilst watching 007 pretender George Lazenby in On Her Majesty’s Secret Service; one of the best Bond films, and one which deserves a reboot with a ‘real’ Bond.

Many decades later and I still haven’t achieved that objective, even after four activity-packed days in a Zermatt where the snow was so dense that cake-like wedges of it decorated the sloped roofs of the village’s houses. 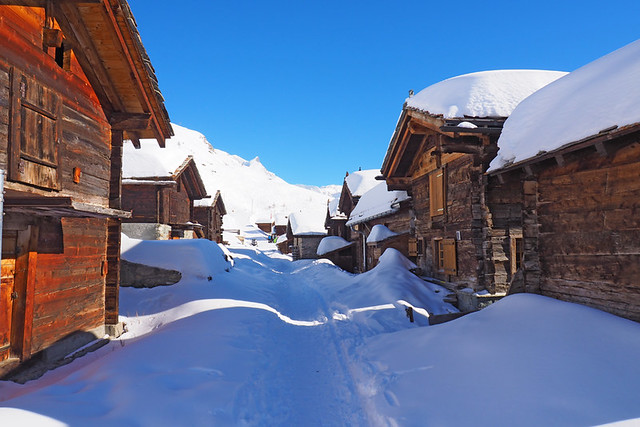 Nephew Liam had visited Zermatt a few times previously; he was the reason we were there – to celebrate two birthdays (his and his dad’s) as well as to show us around his favourite place in Europe. The logistics of packing in as much as possible over a short period of time had been worked out with military precision, starting daily with a bleary-eyed, 20 minute walk to the supermarket for breakfast goodies consisting of fresh baguettes, buttery croissants and chocolate croissants (the last being the reason it wasn’t a 10 minute walk to a bakery located closer to the apartment). Like a sheepdog, Liam herded us out of the front door in time to catch reasonably early trains, cable cars and anything else which could transport us to dizzy heights. 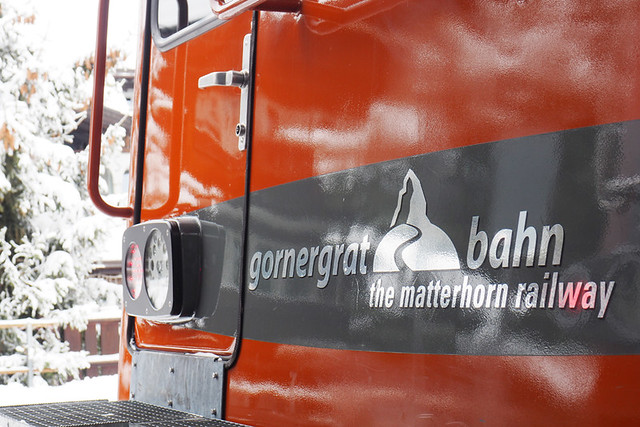 Day 1: White walkers
First of these was the scarlet Gornergrat train which trundled up to Riffelalp, the launchpad for our first experience of walking in thick snow. Not many other folk alighted at foggy Riffelalp. Apart from a girl carrying fashion bags (a surreal image given the setting), we were on our own as we set off along Mark Twain Weg (named because the writer had penned a mocking article about his experiences of walking in the area). Although the air nipped at the nose with the ferocity of a narky Jack Russell and all views, save for the forest of frosted pines around us, were obscured, the walking was intoxicating (partly thanks to the thin air) and, for us, refreshingly different – a factor highlighted by having to dodge out of the way of a snowmobile before we stopped following in Mark Twain’s footsteps to descend through the white forest. 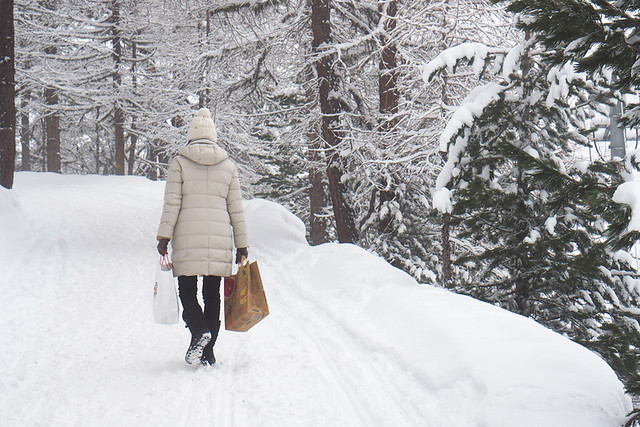 Virgin, snow-hiking boots dealt with virgin snow with ease, making the descent surprisingly easier than on many equally steep snow-less forest paths we’ve tackled. It was magical – a playful breeze gently shook pines beside the path now and again, causing snow explosions above our heads. At one point a brace of does emerged from the mist to watch us with their big Bambi eyes before they melted back into obscurity. At a solitary mountain lodge, where the tranquillity was broken by the unexpected sound of a gravelly Jim Morrison, we paused to let silent riders in the storm pass by before we crossed what was Zermatt’s version of a busy road – a ski slope. 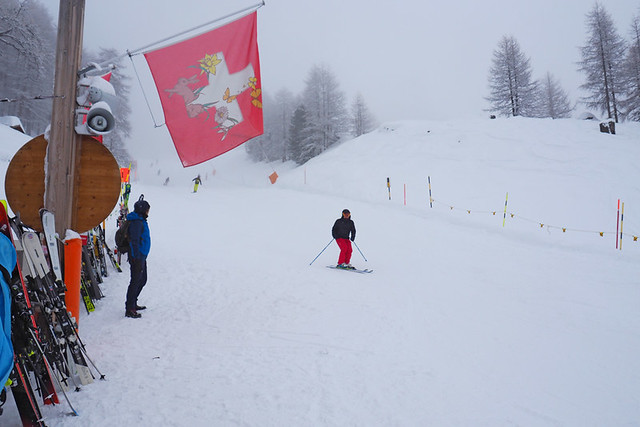 With temperatures plummeting, we abandoned plans of continuing walking to Zermatt and threw ourselves into the embrace of a cosy cable car. The rest of the afternoon was spent wandering around the Matterhorn Museum, being humbled by tales of a local guide who’d climbed the Matterhorn when he was ninety, and learning the village had its own version of Monopoly called Zermopoly. 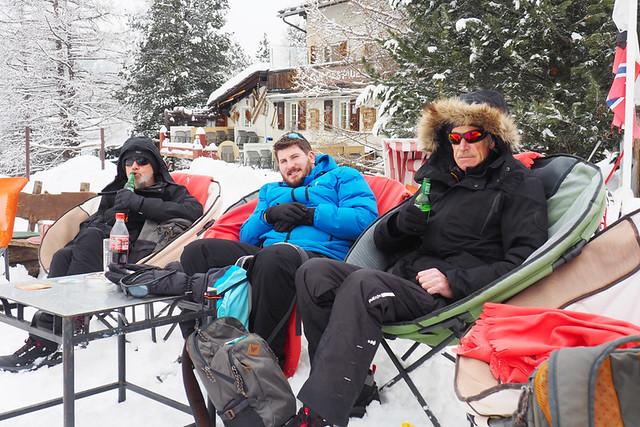 Day 2: Downhill racers
Whilst two thirds of our second day involved more than enough exciting new experiences to fill a week’s visit, including the Matterhorn announcing its presence in spectacular fashion against a cloudless sky and a walk to an Igloo Village, the final third was an off the scale adrenaline rush. I sledged down hills when I was young, stop starting my way on reluctant home-made affairs. Within seconds of ‘kicking off’ on the ten minute descent from Rotenboden to Riffelberg I rapidly realised I hadn’t really sledged before. If I hadn’t been desperately concentrating on trying to a) avoid crashing into people who’d set off before us b) actually steer the thing and c) prevent it becoming airborne every time the track curved steeply in front of me, I’d have been, well, crapping myself. Attempts at braking simply sent a blinding wave of snow into my face, making steering even more difficult. It was no sled, it was an untamed bucking bronco. I banked into the track’s final curve at a speed far higher than I planned/wanted before the beast ran out of breath and spluttered to a stop. Astounded and relieved that I’d made it in one piece without crashing, and as high as the proverbial kite, I Cheshire-cat beamed at a couple standing at the side of the track, shouting: “WOW! I mean, WOW!” It was all I could say.
It was only later, thankfully, I discovered that despite two of us being toboggan virgins, we’d been given Ghosky toboggans, designed for experienced riders as they’re faster than normal sledges and more difficult to steer. 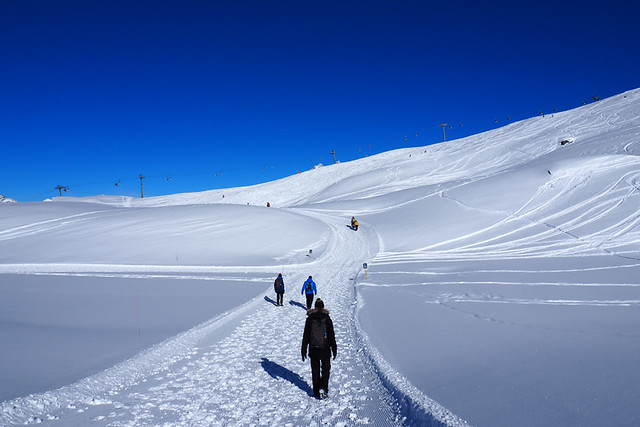 Day 3: Simply breathtaking
The only time we queued to get on any form of transport was waiting to catch the gondolas from Zermatt to the Matterhorn glacier paradise at Trockener Steg. We felt a wee bit like outcasts, the only stick-less people amidst the bug-eyed army with clunking feet also waiting to ascend to the heavens.
At nearly 3,883m above sea level, the Matterhorn glacier paradise is Europe’s highest mountain station. A lift leads to a viewing platform from which it’s possible to see 38 peaks touching the sky at over 4,000m as well as 14 glaciers. It was bitterly, bitterly cold, with a Scrooge-like air reluctant to feed us oxygen. We didn’t linger too long before descending into chilly tunnels which snaked through the inside of the glacier. With its twee sculpted ice animals, it was too kitschy for my liking. In truth, the bit I enjoyed most was an airy return voyage in empty cabins (everyone else skied down) which took us back, in panoramically spectacular fashion to the lowlands of Zermatt (only 1600m above sea level). 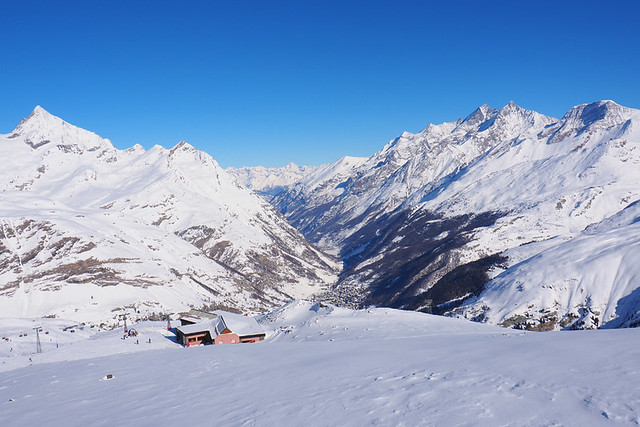 Even more enjoyable was an afternoon jaunt which took us via a funicular through a rock tunnel to Sunnega. There we left the skiing fraternity behind to crunch our way downwards on sparkling paths to the Christmas card cover hamlet of Findeln where the wooden facades of traditional larch timber houses had been blackened by the sun. Once the domain of local families who took their cattle to high pastures to graze in summer months, most of the old houses are now holiday homes. 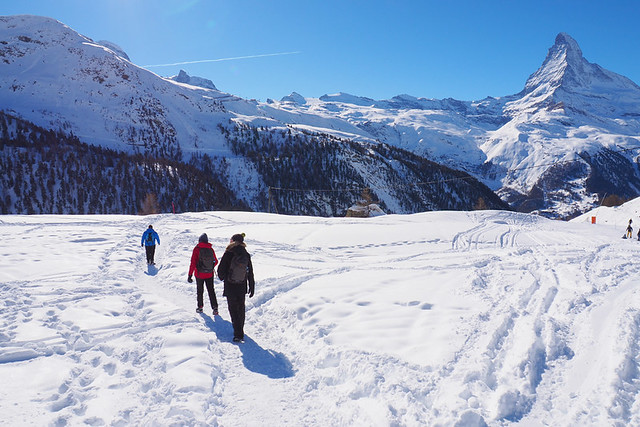 A further short descent brought us to the hallowed entrance of Chez Vrony, THE mountain lodge to dine at in the area. Having a reservation is essential. Ours was arranged well in advance by Liam, so we leapfrogged a queue of hungry hopefuls who hadn’t booked a table and were seated in a prime spot on the terrace with the Matterhorn acting as the restaurant’s stunning centrepiece. Like everywhere in Zermatt, prices were lofty – the famous Vrony burger being CHF 31 – but it was such a uniquely special experience it more than felt like good value. The waitress was friendly, the ambience lively, the food tasty and the surroundings exceptional. Even though the air temperature was below freezing we shed jackets; the sun fierce enough to force us to swap places now and again, just to give faces in danger of taking on cooked-lobster hues a break from its bombardment. 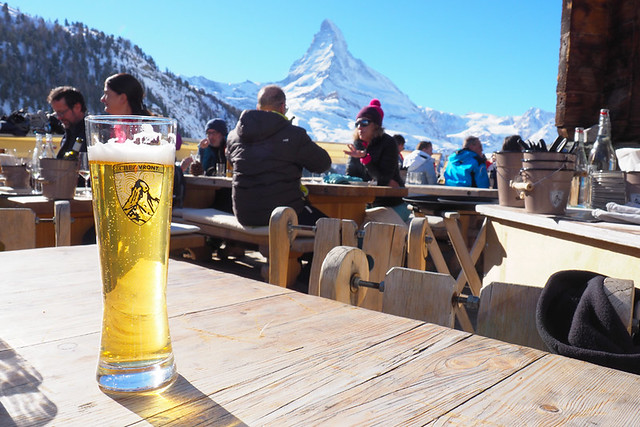 As we sipped amber beers and worked our way through burgers so mountainous they threatened to blot out views of the Matterhorn, I watched as brightly coloured dots appeared on the white hillside, growing larger as they zig and zagged their way balletically to the restaurant’s entrance. What an über-cool way to turn up for lunch. The theme from OHMS filled my hot ears and I made a silent vow.

If we eat at Chez Vrony again, I’ll make sure I arrive the way Bond would.

We Went to Paris and Didn’t See the Sights

Lying outside of Paris’ city limits, Montparnasse was exempt from alcohol tax and subsequently bars, restaurants, cabaret halls and theatres sprang up… […]