We didn’t visit Verona because it was a UNESCO World Heritage Site whose exquisitely preserved architecture reflected key periods of European history. We visited because Will Shakespeare once wrote “In fair Verona, where we lay our scene…” 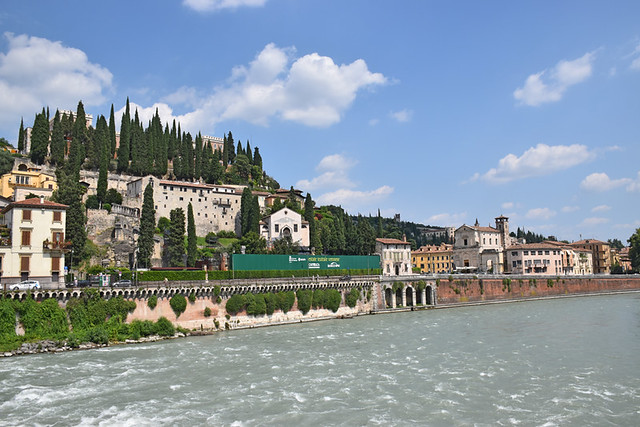 Saturday midday – arrival at Porta Nuova train station
We booked the budget train option (€9.99) to travel from Venice to Verona, quickly discovering this meant no assigned seats, air-con courtesy of the window, and a million fellow passengers in a hot and sweaty carriage. In 30C temps it was more like a mobile greenhouse. We arrived in Verona like a pair of over ripe tomatoes. Mistake two was deciding to drag our suitcases a sweltering 1.5km to the Hotel Marco Polo near the Torre Pentagona entrance to the old town. 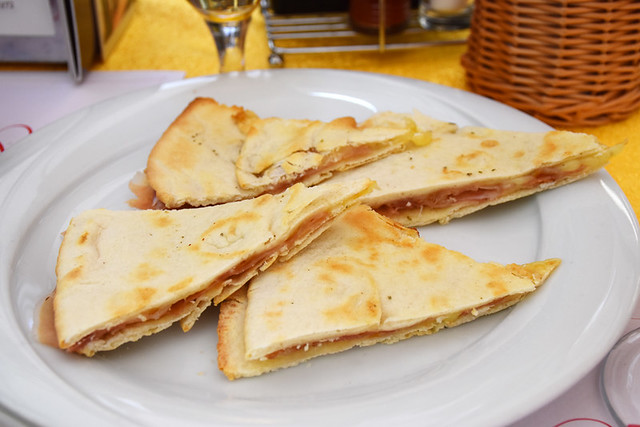 Arriving somewhere new at lunchtime is like being on a culinary game show where the clock ticks down as you struggle to make a decision over which restaurant table to park your bum on before the gong sounds and lunch is over. We chose Le Fogge off Corsa Sant’ Anastasia purely on the grounds the gong was just about to be hit. On Tripadvisor the restaurant earns a lowly two star rating and is classed as a ‘tourist trap’. A restaurant aimed at tourists on the main drag through Verona – who’d have thought? Negative reviews are from folk who ate a full-blown meal there; we wouldn’t have chosen it for that. But for a couple of birras with focaccia and a ham and cheese piadina (€4.50), it was fine. There was a wedding taking place at the Basilica di Santa Anastasia, so we were treated to a wedding fashion catwalk as we ate. 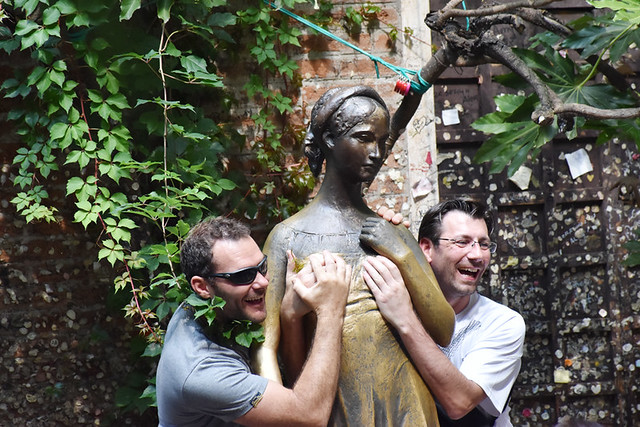 The first thing we do in any compact-sized new city is grab a tourist map, walk, and make a mental tick list of things to explore later. Piazza Bra where the Arena is located – buzzing but with pavement cafes and restaurants definitely aimed at tourists; Via Guiseppe Mazzini – good for shopping; Piazza Erbe – smaller with more character than Bra and worth a return look; Piazzi Signori – nice, but not quite the culinary hideaway described in one travel feature; Ponte Pietra – jazzy buskers, fewer people, views over the river and lots of romantic restaurants nearby; Museum of Love Letters – doesn’t exist; Juliet’s house – oh dear, oh dear. How to turn the greatest love story ever written into a tacky fifty shades of Juliet’s golden breasts, rubbed smooth by selfie-taking tourists. We returned to the Marco Polo via quaint back streets devoid of the masses, noting lots of individualistic bars and restaurants that deserved our presence. 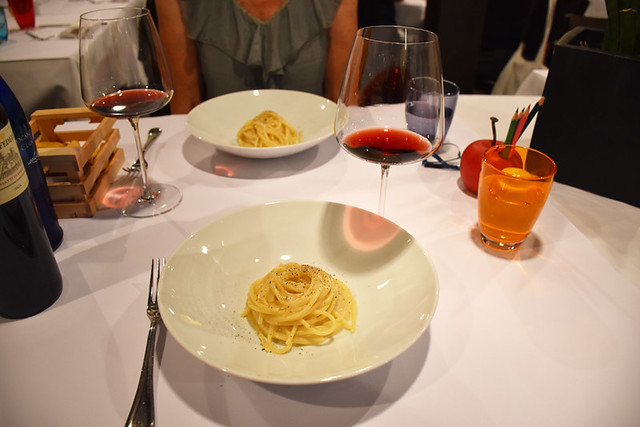 Locanda 4 Cuochi just off Piazza Bra ticked all our boxes. The menu features updated Italian classics, including a four course chef’s menu at €39 (decent value – it’s a Michelin Bib Gourmand) the standout of which was a simple, creamy spaghetti dish. Although a sleekly sophisticated restaurant, each table had coloured pencils so young un’s could keep themselves amused by scribbling on the tablecloth. Ironically, the most enthusiastic ‘artists’ were a table of diners in their late teens.
For post-dinner wine, Piazza Erbe was a different scene from the afternoon. Gone were both Saturday market and day-trippers, replaced by annoyingly stylish Italian promenaders who provided great eye-fodder for avid people-watchers like us. 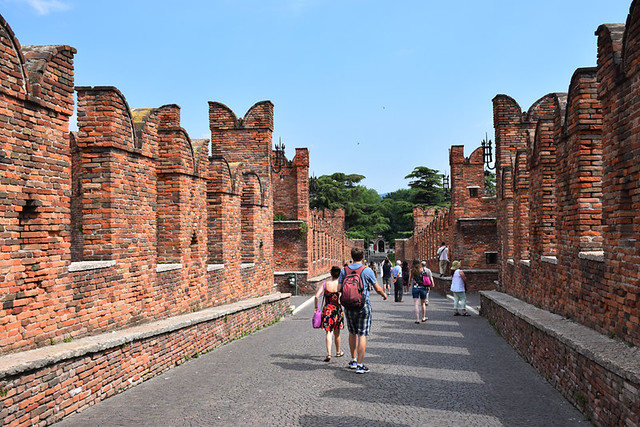 Ponte Scaligero – as well as being an attractive red brick construction, the bridge is the place for riverside photos of medieval Castelvecchio, one of the city’s famed historic edifices. Over the river is Arsenale Franz Josef which Google Maps lists as being an open air museum. Of what I’m not sure, unless it was a mock up of a seedy urban development.
Torre dei Lamberti (€6) – in city of towers Lamberti at 84m high is tallest. The tower has two bells. One signalled the end of the working day and when fire broke out. The other summoned residents during times of war. Sounds potentially confusing to me – ‘should I bring a bucket of water or a gun?’
Arche Scaligere (€0.50) – a courtyard of elaborately decorated tombs built by the Della Scala family, rulers of the city in the 13th and 14th centuries. The tombs are rather beautiful and quite intriguing. But we’re graveyard ghouls. 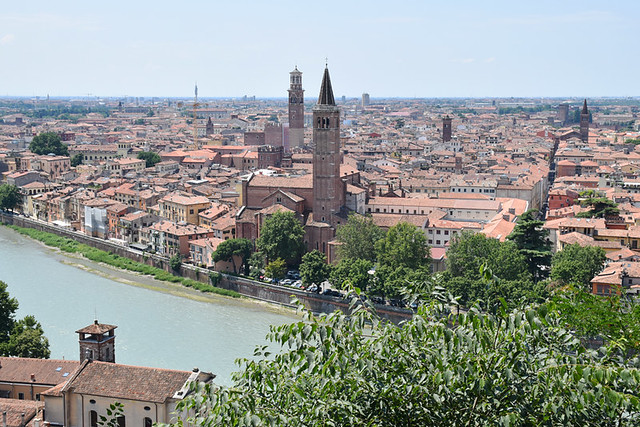 Funicular di Castel S.Pietro – just over Ponte Pietra, the funicular was initially designed to make it easier for students to get to the Accademia delle Belle Arti. Now it saves thigh muscles from walking up to Castel San Pedro. It’s €2 (one way) well spent. The Castel isn’t much of a looker up close, it’s the views across the river to old Verona which are the draw.

Time out for a beer 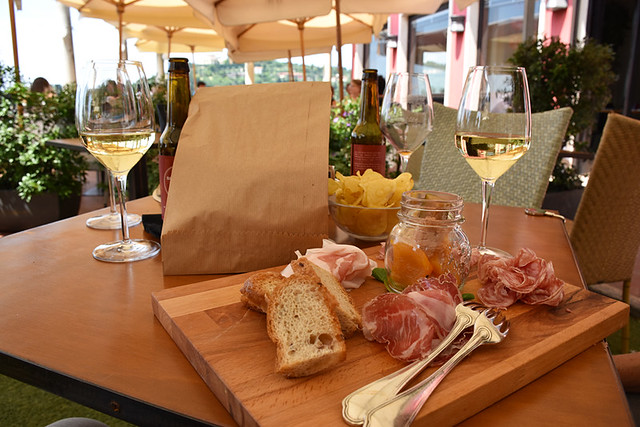 Conveniently, next to the Castel is restaurant Re Teodorico where you get the same views but with the bonus they’re accompanied by a La Traviata beer (or whatever tipple you fancy). We only stopped for a drink, but once settled in our scenic seats decided to do what everyone else was doing and order a platter of mixed meats with focaccia and pickled vegetables (€14). This is a fabulous lunch venue.

Final culture stop
After a birra and a glass of white, the idea of wandering around Verona’s dusty Duomo didn’t appeal, but as we were passing anyway… 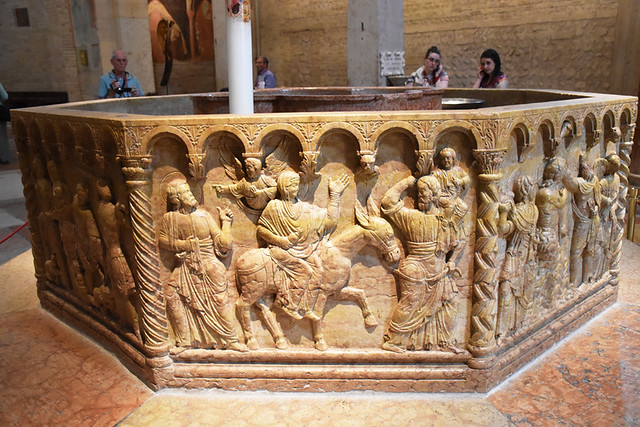 The Romanesque Cathedral (€2.50) wasn’t dry at all, thanks to an excellent audio guide which added colourful insights to what is ostensibly a mix of church, museum and archaeological dig. The marble baptismal font is particularly interesting, and gruesome. From one place of worship to another, this time at a church of Bacchus aka La Tradision (on a street leading from Piazza Bra); an absolute cracker of a tavern which stocks a huge range of wines and beers as well as snacks and pastries. If I lived in Verona I’d make it my local. 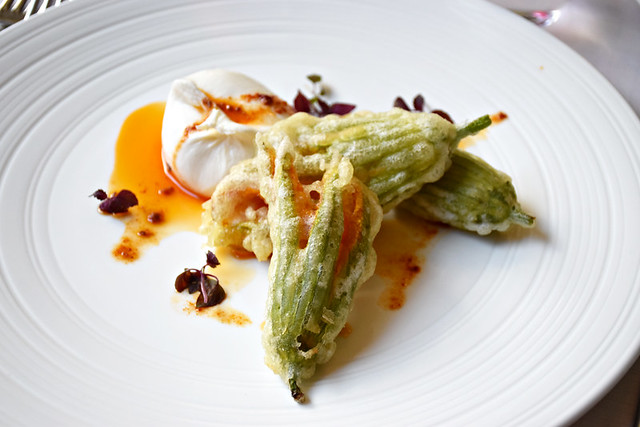 Ristorante Antica Torretta is a cliche of an Italian restaurant – an historic building near Ponte Pietra with tables lining an old wall decorated with climbing vines – which is why we decided to eat there. That and the fact it had fried courgette flowers on the menu. These were accompanied by the likes of Black Angus tartare and nettle filled tortelli with scallops (€16). After feasting we wandered back to our favourite post-dinner watering area, Piazza Erbe, strolling through empty streets lit as though they were part of the set of a romantic movie. 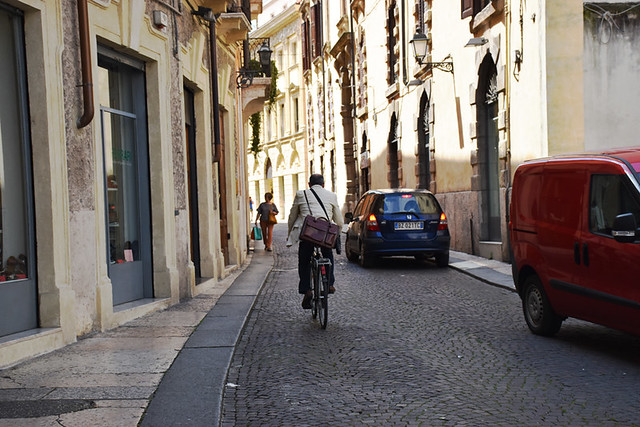 We still had a couple of sights to tick off. Juliet’s Tomb (€6) is a bit of a trek south east of the centre. Whilst we confirmed it was open, we didn’t check actual Monday opening hours – 13.45 to 19.30. We had a look through the closed gate and toddled back to enjoy more of the old centre instead, watching smartly dressed Italians peddle old bicycles with wicker baskets on the front – proper cycling. Instead of looming over the tomb of a tragic teenager we loomed over a couple of Aperol Spritz in Nobis, another snazzy little side street cafe/bar, before heading to what should have been one of Verona’s highlights. 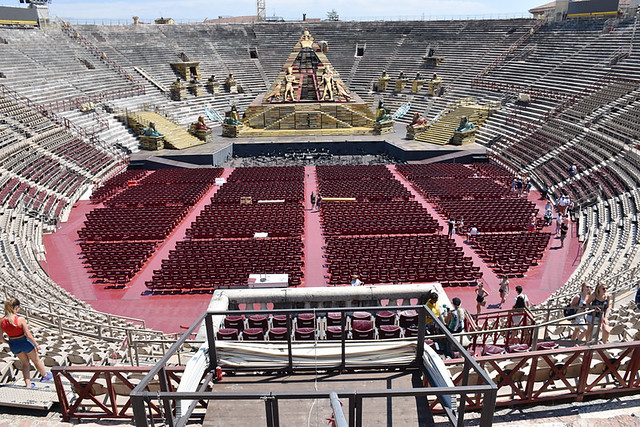 Built in the 1st century A.D. the Arena is the third biggest Roman amphitheatre in Italy. It’s the centrepiece of old Verona, and somewhat of an anti-climax. From kitsch Roman centurions at the entrance to its disgusting toilets it underwhelmed. It’s an impressive piece of ancient architecture for sure, and I imagine watching an opera there would be quite special, but we didn’t feel it was worth the €10 entrance fee; half that maybe. 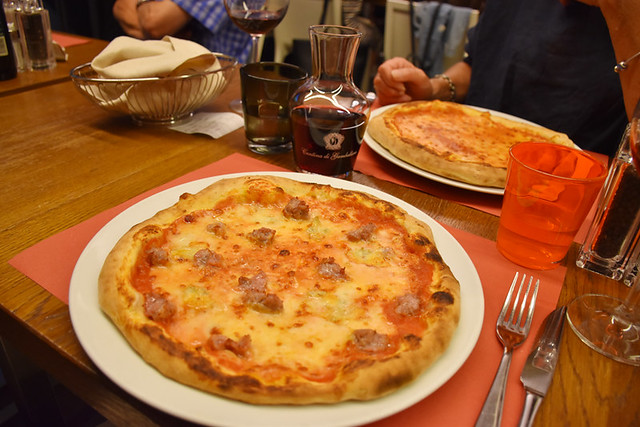 England playing Tunisia in the World Cup dictated where we ate. With Italy not qualifying for the tournament, restaurants showing live games were in short supply. Pizzeria Bella Napoli around the corner from the Marco Polo was one which was; it was also known for serving good pizzas. Being just outside the old town, the modern pizzeria was frequented more by Italians than visitors, none of whom were interested in the match. Subsequently, the football was screened without commentary. The pizzas (average €8) lived up to their reputation and the lively atmosphere in the restaurant made up for the muted game. 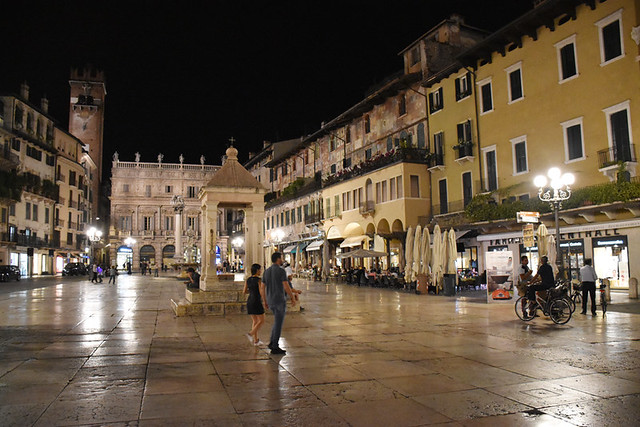 Tuesday Departure
Lesson learnt, we booked a seat on one of Italy’s red arrow trains (Freccia Rossa) for a comfortable, crowd-free, air-conditioned return trip to Venice. Although twice the price of the budget train it was more than worth the extra money. 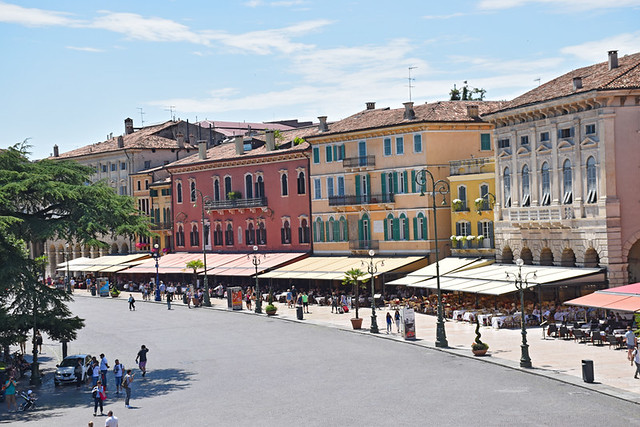 Verona in a sentence or two
We’d happily spend more time in the romantic old city. We were charmed by its historic streets, the slightly off the beaten track attractions, and its restaurants, cafes and bars. There was generally more of a ‘local’ feel to Verona than we’d experienced in the heart of Venice. Basically, it was a lovely location to simply wander around aimlessly. The ‘big’ attractions were, ironically, Verona’s weakest aspects; kitsch and overrun with day-trippers. I’ll leave the final summing up to the Bard.

“There is no world without Verona walls, but purgatory, torture, hell itself.”

Santiago oozes cosmopolitan. Unmistakably South American but with a distinctly European side, it instantly feels familiar. […]