Stopovers are the worst way to experience a city. They’re wham, bam, thank you ma’am travel one night stands which can ultimately leave you unfulfilled.

And so it was with Athens, the Greek capital where the east meets the west. I read a great line in an Uncyclopedia listing for the city which said – “The city is where the west meets the east, mugs it, and makes it inhospitable. The west doesn’t belong in Athens…”

Even after a visit of less than 24 hours I sort of knew what it meant. 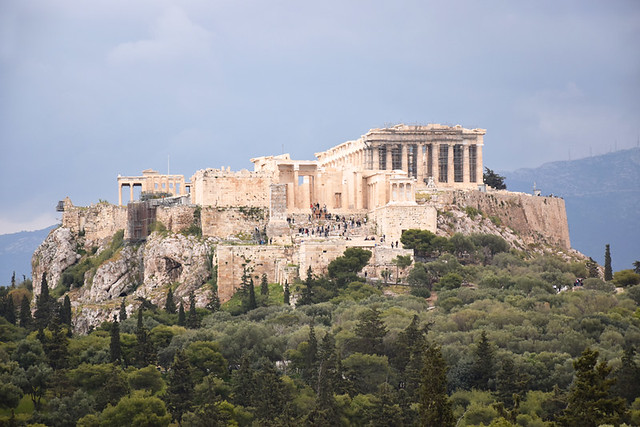 With limited time there was one thing we had to see, and one thing we definitely had to do. The ‘see’ was the Acropolis. When I say ‘see’ I mean that literally – there was no time to enjoy its ancient embrace, just enough to stand on the same hill as the one on which the citadel reclines and take a couple of dull snaps. It was a gloomy, damp day; the Greek Gods clearly having a barney, their furrowed brows creating bruised ripples across the sky. All that was missing was Zeus flashing his lightning rod.

Our hotel was located in what might once have been the Acropolis foothills so we were able to notch that one off the list quickly before moving on to the ‘must’. 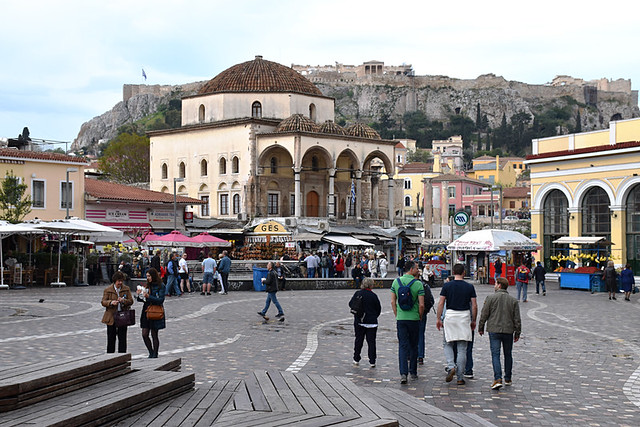 The ‘must’ was annoyingly mundane. One of us had forgotten to pack the cable for the laptop.  Having a powered up laptop was an essential tool of the job as we were on a week’s mission to walk across, record and photograph Andros, one of the islands in the Cyclades. So we went shopping.

Ermou Street
A pedestrian walkway, Apostolou Pavlou, lined with cafes and stalls leads from the Acropolis to Ermou, the main shopping street in Athens. It’s a street which illustrates why the ‘east meets west’ tag is so justified. The western end is a manic hotchpotch of ramshackle market stalls and messy stores spewing their goods onto the street – the sort of places which would have Maria Kondo either in ecstasy or therapy. It’s an area where it feels, as the blurb said, the west doesn’t belong. A compelling place to lose yourself in, but not when time is short. 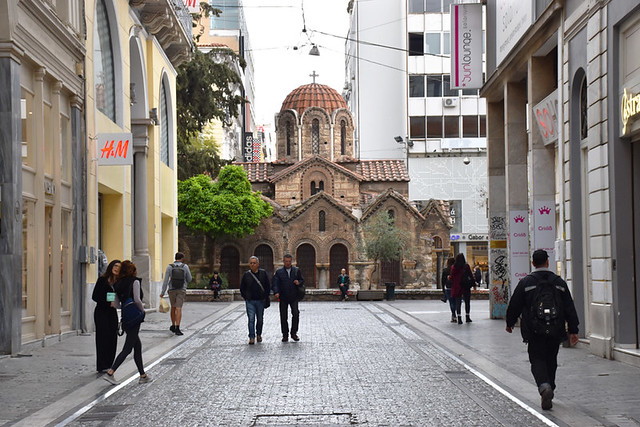 Half-way along and the street becomes familiar, maybe depressingly so. Where the western end (ironically with the eastern vibe) exudes a unique personality, the eastern end, except for a couple of out-of-place Byzantine churches, morphs into one of those homogeneous European city centres (H&M, Marks & Spencer, Zara, McD’s). Dull, familiar, and the ideal place to pick up a replacement cable.

Dinner & drinks in Athens
It was also a hop, skip, and a jump from the Herodion Hotel to the Plaka area where restaurants, bars and shops line narrow streets with shiny cobbles. There’s plenty of choice, but it felt designed for tourists. The restaurant we chose, Kosmikon, occupied an appealing location, squeezed onto an apex on a pedestrianised crossroads (good for people-watching). But the food, whilst okay, was like the sort of cuisine cooked for a transient market rather than a local one. 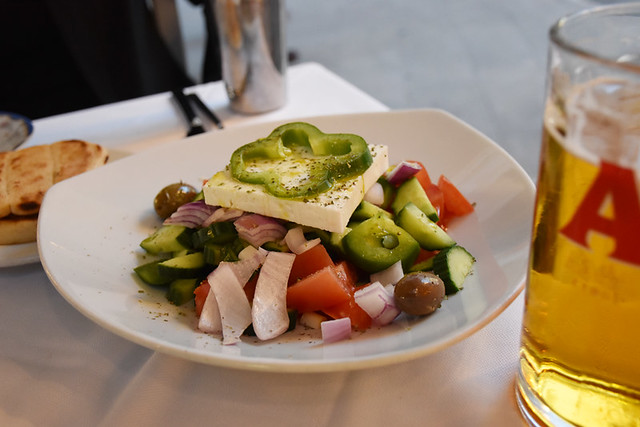 The bars had a completely differing vibe. On a nearby street, Brettos, the oldest distillery in Athens, was the alcohol-lover’s equivalent of wandering into an old fashioned sweet shop. Instead of finding shelves full of jars of coloured candy, you get rows of luminescent bottles of coloured liqueurs.
In between Brettos and the Herodion Hotel we veered off track, drawn by the sound of laughter and lively chatter down a side street. Wine o’clock lived up to its name – an amiable, hole in the wall bar with speciality wines, great music, and complimentary mezes.

Onward to Andros via Rafina
To get to Andros we had to catch a ferry from Rafina, about 30kms from the centre of the city. There are a couple of ways to get there; the easiest one is to jump in a taxi which takes about 1hr 15mins and costs approx. €60. We’re guinea pigs when we’re on these missions for Inntravel. It’s essential to experience what their customers will so we can prepare them in advance for anything which isn’t clear. And there are always aspects to travelling through unfamiliar places which are ambiguous. 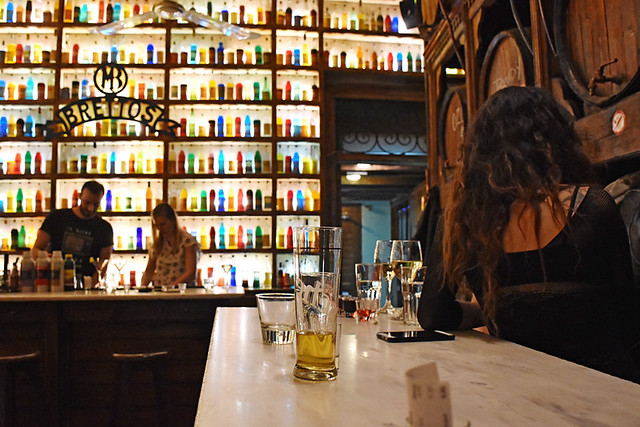 In this case, one was exactly where to catch the bus. We knew it was at Pedion Areos. As that’s one of the biggest parks in Athens, there’s a lot of scope to turn up at the wrong part. It’s not the most salubrious areas of the city either; it has a rating of two and a half stars rating on Tripadvisor, from people who turn up expecting a pristine city park. Bus stations are often seedy for some reason, at least this one was in the open air beside a park, albeit a run-down one. It took some asking around and then asking around a bit more to discover which was the Rafina bus. Then there was confusion about how to pay; nobody seemed to be interested in taking any money. About 45 minutes into the journey, the passenger in front of us stood up, rummaged around in an old carrier bag for a few moments, and pulled out a small antiquated machine, cerca 1971 – the ticket collector had decided it was time to do his thing.
The bus itself, a coach, was comfortable and only half full. It took about the same time as a taxi to get to Rafina and cost us €2.60pp. 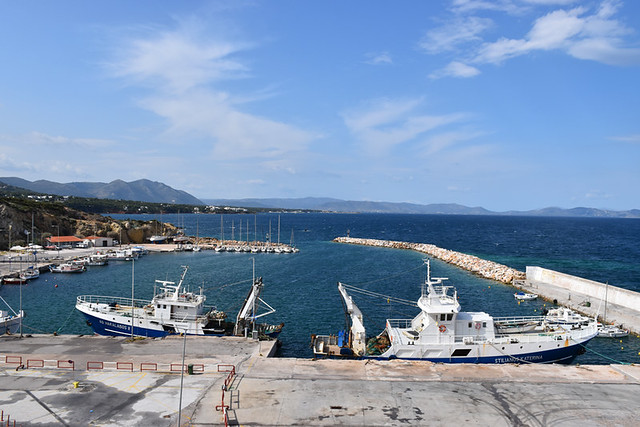 Rafina
We were far too early for the ferry, but it didn’t matter. Rafina is a bustling and not unattractive town. The port area is home to some good fish and seafood restaurants, whilst just behind the harbour is a sizeable square also lined with bars and restaurants. It isn’t the slightest bit touristy. On our return trip we stayed overnight and the modern bars overlooking the harbour were lively after dark. But they were also filled with a choking fog. A decade after a smoking ban was introduced and it’s still being ignored in Greece. There’s a threat of hefty fines, but the law just isn’t enforced. In the restaurant we ate at on our return trip even the waiter lit up. Greece tends to do things its own way. 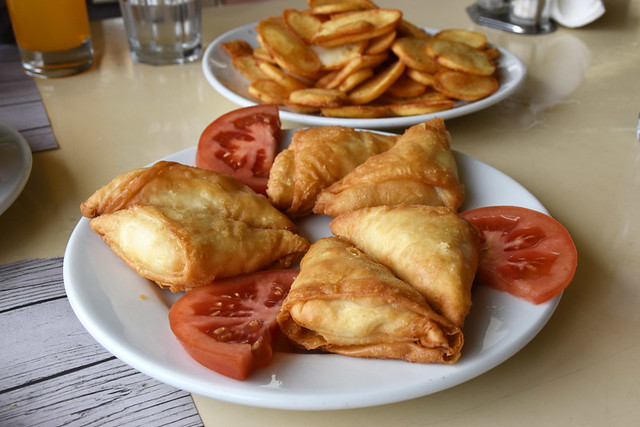 Despite the smokey bars, there’s a down to earth character to Rafina which we liked. It’s not the most picturesque Greek harbour around, but it is friendly and the restaurants are good. We ensconced ourselves in one with panoramic views of the sea, ordered a shedload of mezes with Fix beer and chilled. Well, one of us did. As the rain splattered the windows and grey waves lashed at the harbour wall, Andy (not the greatest sailor) remembered she hadn’t brought any seasickness tablets. She expected the Aegean to be mirror calm. She asked the waitress if there was a chemist in town. There was, but it was shut. However, the waitress came up with an unexpected alternative suggestion.

“Ask the guy at the kiosk.”

The kiosk was your typical tobacco/newspaper shed yet, sure enough, he reached beneath the counter and produced two seasickness tablets for 0.50 cents. Rafina is that sort of place. 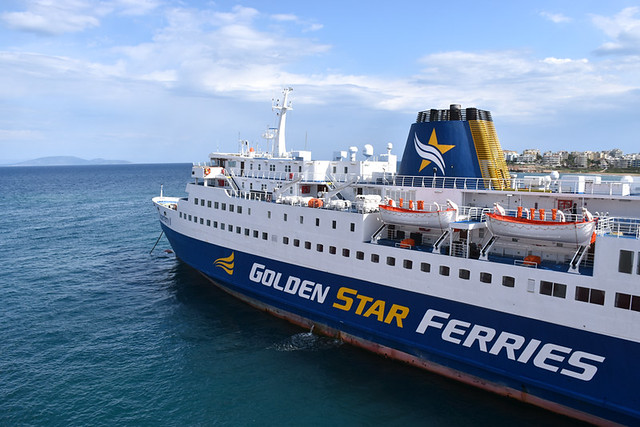 As the ferry came in the clouds dissipated, the sun smiled and the sea calmed.

We were fed, watered, relaxed and ready to move on to Andros two hours away.