‘Go and have an adventure,’ the windmill whispers.

I have no intention of whittling the nearest branch into a lance and attacking the thimble shaped construction with its canvas-less sails. But the image that floods my mind ever time I lay eyes on an old fashioned windmill is of a shoddy, misguided knight attacking a giant with four spinning arms. 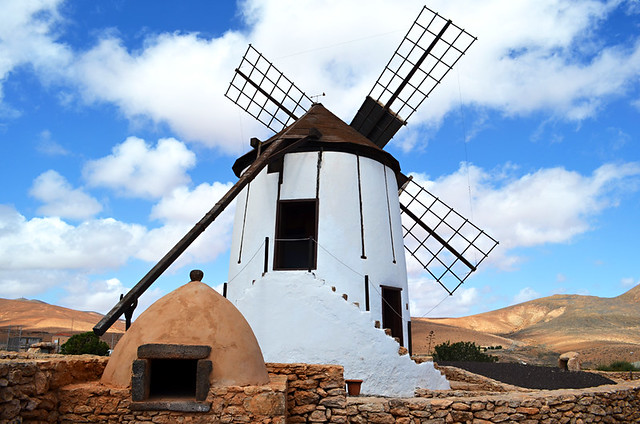 Unlike Don Quixote, I know these are benign, gentle creatures that exist for the benefit of humankind. They harm no one, not even the environment.

Plus, this is Fuerteventura, there are no trees to whittle into a lance.

Fuerteventura’s burnt amber landscape is littered with windmills. It’s unsurprising given its name – strong wind. Someone tried to tell me that the island might have been named because the first conquistadors had a ‘big adventure’ there. Hmm, I know where my dinero lies.

The traditional windmills add a lyrical charm to the landscape and fit snugly into a terrain that has a palpable North African flavour. 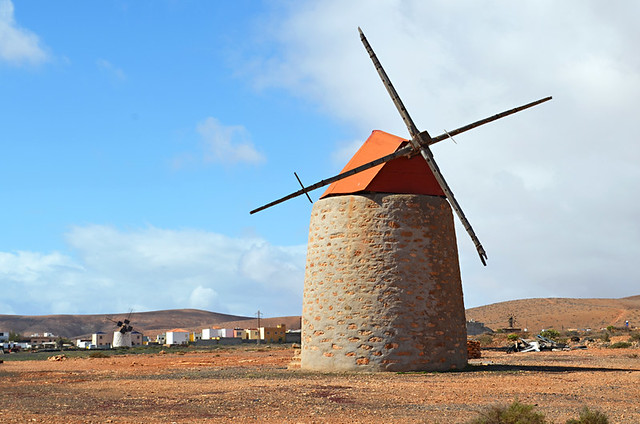 But Quixote’s windmills aren’t alone. There’s a relative newcomer with a lean frame and a cocky glare. An American import whose mere presence conjures up visions of wide plains and Stetson hatted ranch hands squinting into the blistering sun.

The legend on the tail is pure 1950s Americana – it says ‘Aermotor’. 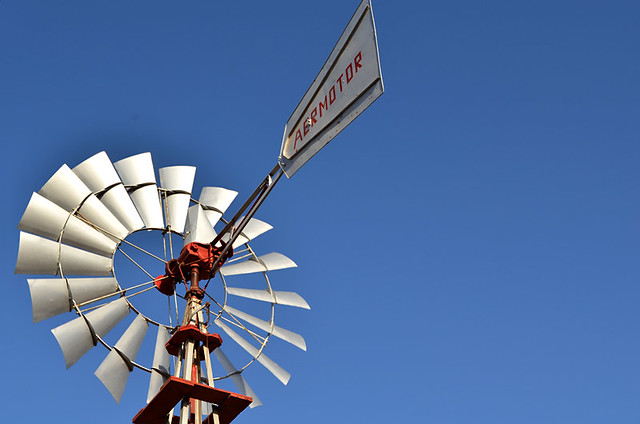 Aermotor was dismissed as the ‘mathematical’ windmill when it first appeared on the American market in 1888, selling only 24 models in its first year. Four years later that number had leapt to 20,000.

How the famous Chicago windmill came to be on Fuerteventura I don’t know. It arrived sometime during the 20th century and, like the cheeky Barbary squirrels scampering around the orange hills, thrived; proving perfect for the dry, windy climate.

The iconic frame looks surreal against a North African/Spanish backdrop, but it is an effective machine at drawing water from deep pozos (wells). 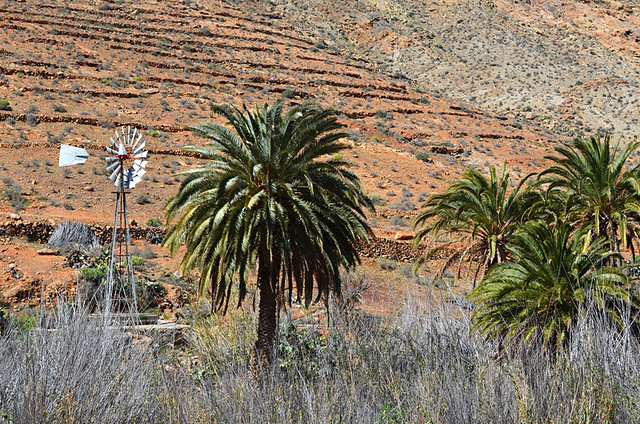 It is hypnotic to watch; creaking and protesting at the constant assault on its metal sales, keeping the wily wind in check by swinging around to counter attacks from new angles.

Its blades also whisper tales of adventurers and pioneers. In that respect it is a suitable successor and a welcome companion along Fuerteventura’s dry and dusty trails.

It might look surreal, but the Chicago windmill doesn’t look out of place.

(*) Whenever I see an American style windmill, the picture that pops into my head is James Dean glaring down from one in the film Giant.