Compiling a selection of photographs for a website took me on a wee voyage down memory lane; each photo a reminder of a moment in time – some from a few years ago, others only weeks old. When you enjoy notching up new experience after new experience, the older ones tend to get gently nudged into the shadows on a regular basis. Even the most recent ones are allowed only a brief time in the spotlight of your mind before something new and shiny muscles in. Subsequently, I enjoy flicking through the digital albums, reigniting fond memories. 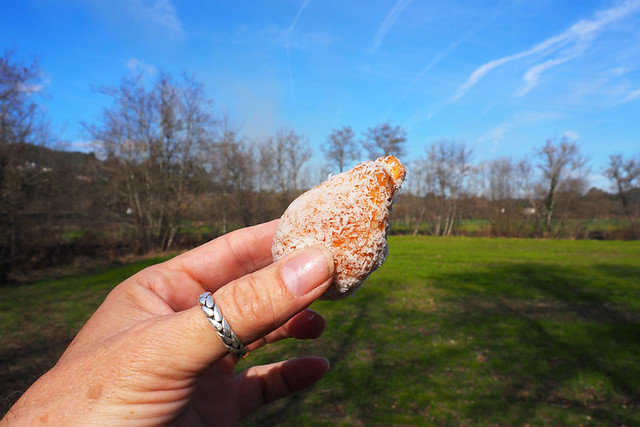 Some photos might be of seemingly insignificant items. But what’s visualised in the mind’s eye consists of a far greater panorama than what’s visible in a photo. To everyone else this might just look like an image of pear-shaped cake against a blue sky. To me it speaks of a warm afternoon in the Minho and a simple lunch consisting of a motley picnic laid out on a dry stone wall beside a small lake where a Roman bridge connected one side with the other. Off screen a couple of pilgrims walking the Portuguese Caminho de Santiago shout a “Bom caminho” as they stride by. Each photo has its own story.

Some images, on the other hand, speak for themselves. These are the ones which capture an essence of those WOW travel moments. It was one such photo which prompted this pondering. It remains one of my most outstanding travel experiences, even though it includes a domineering landmark I saw on virtually a daily basis for years. 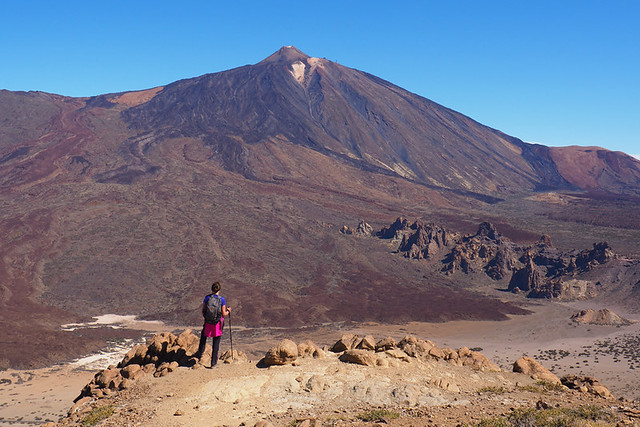 The Tenerife reveal
How can the most iconic natural feature in the Canary Islands sneak up on you, tap you on the shoulder and shout “Boo!” It would seem an impossibility. However, there’s one walking route on Tenerife where we climb through forest and then volcanic scree, ascending from 1500m to 2400m, without the slightest hint Spain’s highest mountain might be in the vicinity. And then, right as we reach the rim of the crater wall shielding Teide National Park, its towering volcano centrepiece explodes onto the scene. Unbeatable. 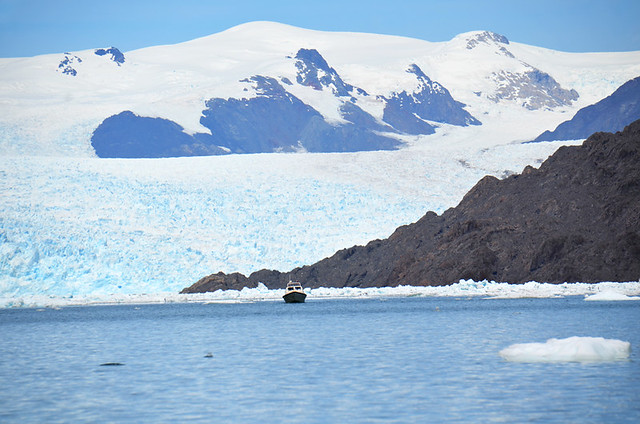 The edge of the World in Chile
A couple of hours earlier we’d been standing on a wooden walkway surrounded by forest and sub-tropical vegetation in Tortel. Now we navigate through petrol waters and a minefield of icebergs before our captain moors the small launch beside a rock on the outskirts of the Jorge Montt glacier; the northern tip of the South Patagonian Icefield. Spanning 13,000 square kilometres, it’s the largest expanse of ice outside the Antarctic. From a tundra clad hillock we gaze over an untamed wilderness surrounded by a maze of islands. It’s a world wonder tinged with sadness as the vast ice field is withdrawing at an alarming rate. Wonder and despair at the world we live are in encompassed in the same frame. 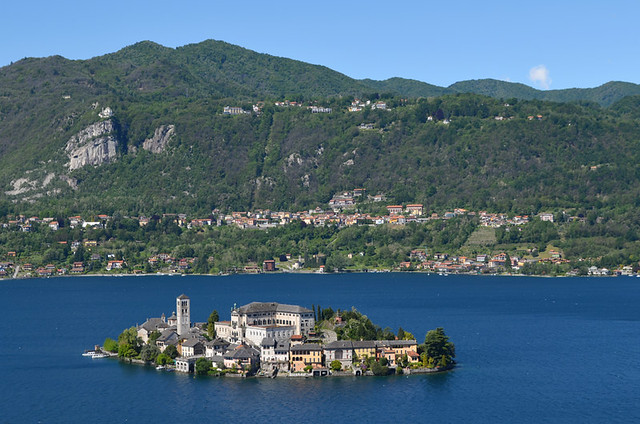 Italy hurts the eyes
The time we went to a UNESCO World Heritage Site and completely ignored it. The reason for a slog up an Italian hill on a hot spring day was to visit the Sacri Monti above Lake Orta. Nine of these Sacred Mountains in northern Italy form the UNESCO Site (or sites in this case). Once we arrived at the sacred summit, it barely got a glance from us. Instead we were drawn to a viewpoint overlooking Isola San Giulio, a bewitching jewel set in sapphire waters. We turned our backs on history in favour of an enigmatic beauty basking in the lake. 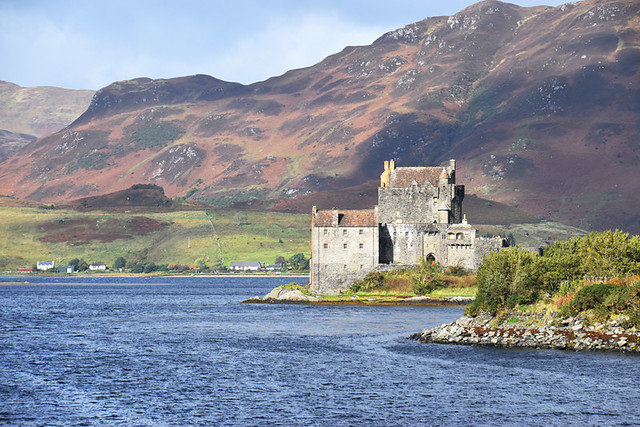 Eilean Donan at last
Maybe it’s because I’m Scottish and biased, but there are few visions to match that of an ancient Scottish castle sitting on a lake surround by the bleakly beguiling Highland landscape. The Highlands boast many such scenes. Topping them all is Eilean Donan, instantly recognisable thanks to its film star status. Yet, until September 2018 I’d never actually set eyes upon Eilean Donan. In fact, ask me to point it out on a map and I’d have failed miserably. Which is why, as we rounded a corner on the banks of Loch Duich on our way to Skye, you could have knocked me down with a pheasant’s feather when the great castle filled our windscreen. 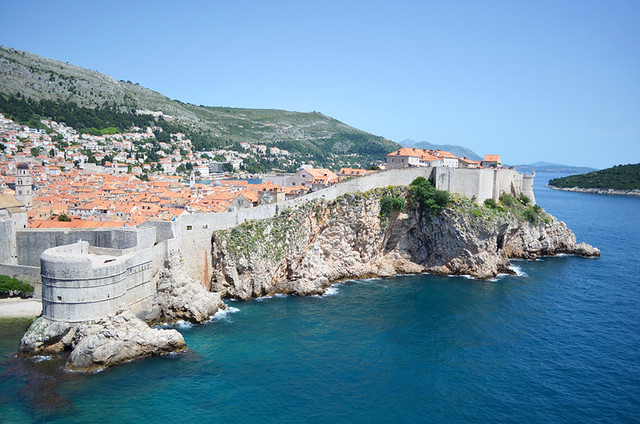 The rise of Dubrovnik
Emerging onto the ramparts which encircle Dubrovnik Old Town prompted a reaction which inadvertently masked two things I’d been trying to keep hidden from our guide who was showing us Game of Thrones locations. One was that I’d been distracted from Dubrovnik’s perfectly preserved prettiness by marauding hordes of cruise passengers. The other was that having never watched Game of Thrones at that point (this was between season I and 2). I had no idea who Joffrey Baratheon was and wasn’t a gifted enough actor to feign a convincing response to being shown the part of the city where he’d been hit in the face by a dollop of excrement. The view from the crowd-free ramparts transformed my expression into one of authentic wide-eyed wonder, showing our guide I really was suitably impressed. 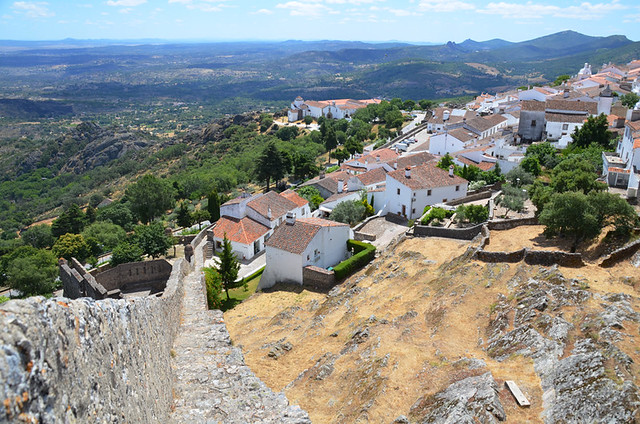 Marvao, deserving of the accolades
The Alentejo hilltop village of Marvao is often described as one of Portugal’s prettiest, deservedly so. It’s one of the most picturesque and striking villages I’ve pottered around. For four months Marvao, on view from every part of our terrace, was our eye candy, distracting us from writing as we tried to keep cool by working outside during a sizzling summer (we’ve since learned staying inside in a darkened room is often better). It’s also one of those places which looks as good from within as it does from without. A huff and puff up the old walls which protected it for centuries rewarded with endless views across the Alentejo plains, their expansiveness showing just how much of a strategic fortification Marvao was. 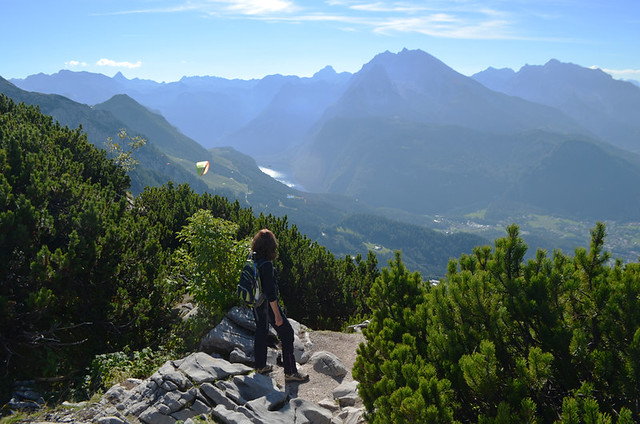 The eerie eyrie in Berchtesgaden
There are a few locations where big views are ‘hidden’ until the last moment. Hitler’s birthday present, the Eagle’s Nest, in Berchtesgaden is one. The approach to the Kehlsteinhaus involves entering a tunnel cut deep into the mountain followed by a claustrophobic ascent in a golden lift. It’s oppressive, history hangs heavily in the air and a feeling of being trapped can crawl its way up from the bootstraps. We found ourselves gasping for a couple of reasons when we emerged from the gaudy elevator to find ourselves freed atop the eagle’s lair, looking down on Bavaria’s lakes, valleys and mountains. 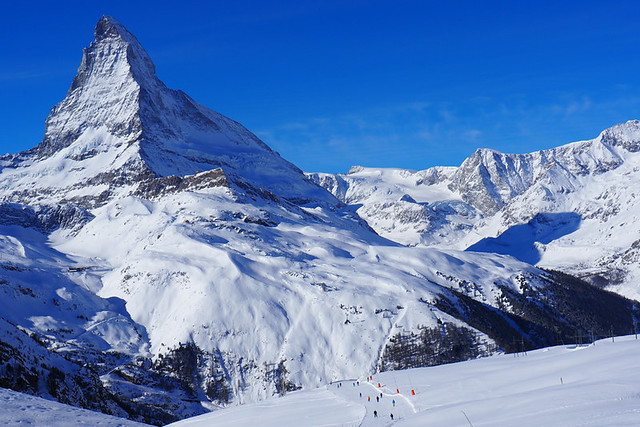 The Matterhorn from any angle
I’ll keep this one short and sweet. In Zermatt I spent four days with my face looking like facebook’s wow emoji. 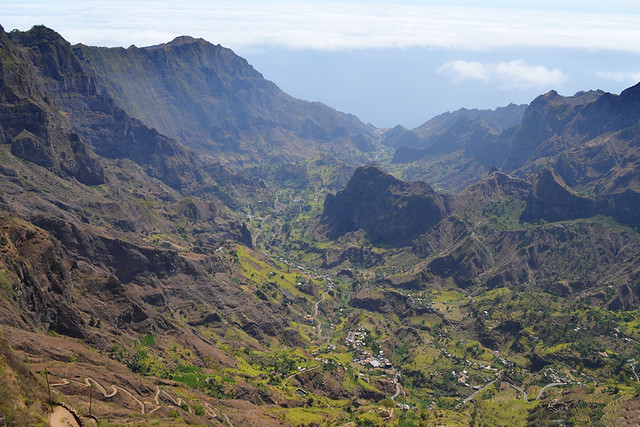 Crater lows to valley highs on Santo Antao
I’m book-ending this selection with another crater on an island experience; this time on Santo Antao in Cape Verde. Our walking route began in the basin of a volcanic crater which had become a pasture for livestock and whose rich soil was perfect for growing crops. The volcanic bowl masked all around it, so that we could see nothing except the interior of the crater itself until we reached its rim. Once we did, the landscape which unfolded in front of our eyes made us feel like Victorian explorers discovering a lost world; a fertile, enclosed valley of sugar cane, banana palms, and papaya trees. The impact of seeing the Paul Valley for the first time delayed the realisation that to get to our destination way, way below in the valley floor was going to involve one hell of a descent.

The remote lonesome beauty of living in Alentejo

The clanging of bells as goats made their way to their daytime pasture was our alarm call in the morning; a mixed chorus of song from golden orioles, bee-eaters and azure-winged magpies serenaded us over breakfast under a grape covered arbour; […]