Ever-moving, ever-changing, lofty and vaporous – the mar de nubes (Sea of Clouds) that so often shrouds Tenerife’s former capital of La Laguna, is the inspiration both for the name and the nature of NUB, the island’s latest restaurant to be awarded a Michelin star. 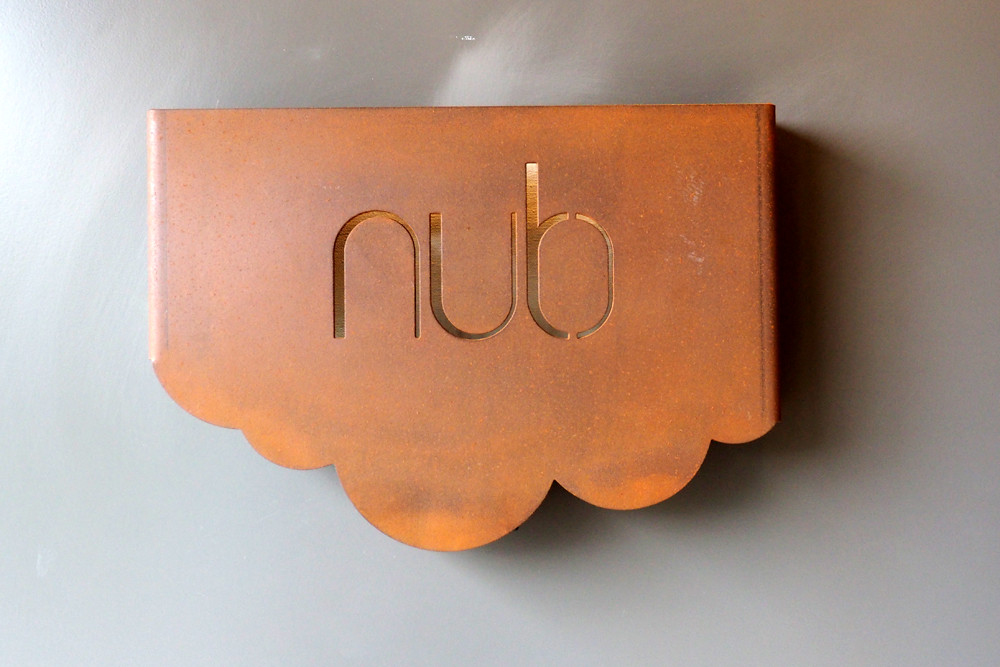 Something of an enigma in so far as, it received its Michelin star when it was temporarily closed, Nub (pronounced noob) is the creation of Italian chef Andrea Bernardi and Chilean chef Fernanda Fuentes Cárdinas. Its heady promise of a creative fusion of Italian and Chilean cuisine had long been anticipated, and an early flight to La Palma was all the excuse we needed to book a night at the hotel and dinner at Nub. 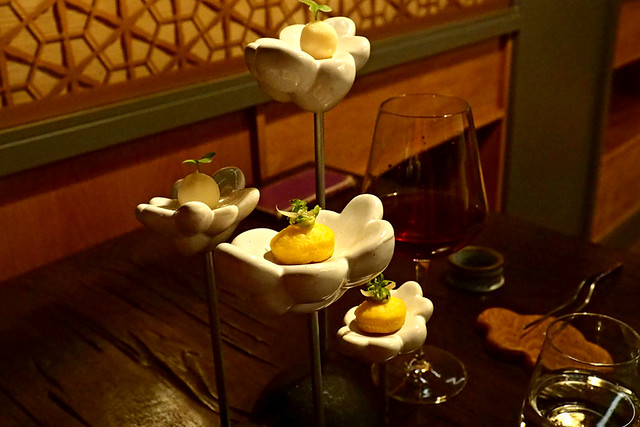 It was a Wednesday night and only a handful of diners were already eating as we were shown to a table alongside the open kitchen. Opting for the shorter, Lauquen menu of nine courses (€75pp), the arrival of the amuse bouche didn’t just amuse the palate, it also spread smiles across our faces. If we were in any doubt as to the importance of the cloud analogy to the restaurant, ‘snacks in the cloud’ dispelled it, providing six contrasting bites, two of which were placed on white clouds atop tall spikes. 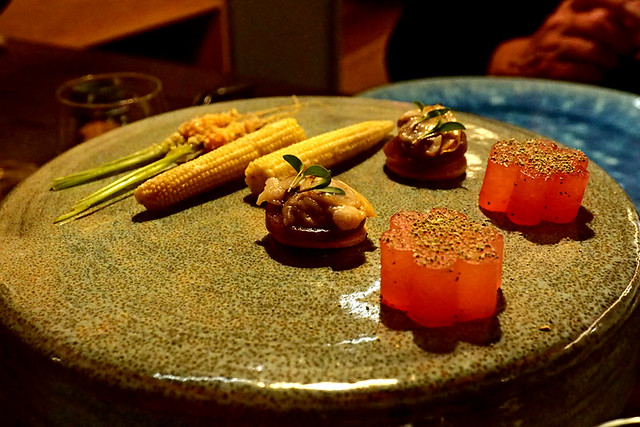 Favourite amongst the ‘snacks’ was the horseradish in white chocolate – a creamy blend of sweet then spicy that exploded in the mouth in an ecstasy of flavour – once we’d mastered the tweezers to get it from cloud to mouth. A tiny sopapilla; miniature carrot with tangerine; miniature corn-on-the-cob with mature butter; and clam on a gofio biscuit were rounded off with melon in beetroot with rica-rica herb.

Each course provided an exciting blend of taste and texture, drawing elements from classic Italian and Chilean dishes and combining them with traditional Canarian, using locally-sourced ingredients. 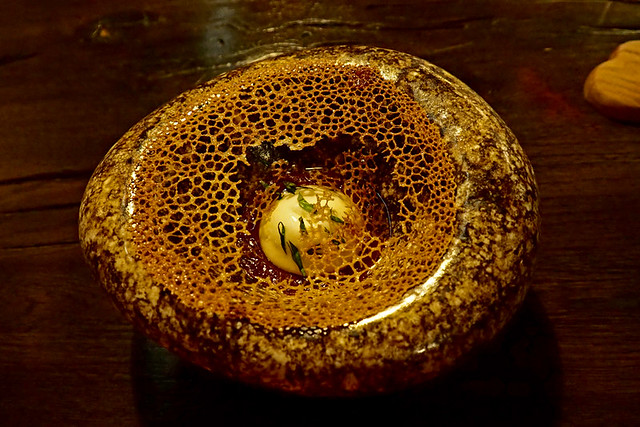 Two particular highlights stand out from the innovative and beautifully executed menu. First course was a Mozarella, tomato and basil in kefir cream topped with a fine, goat’s milk cheese tuile. The crisp texture and salty sour taste of the tuile melted into the sharp and creamy cheese and sweet tomato. Then came the crème brûlée of corn with aged onion and herbs ceviche, probably our favourite dish of the evening. A rich, spicy, smoky cream chowder infused with the sweetness of the aged onion and citrus-sharp, it was the sort of dish you could eat every day of the week and never grow tired of. 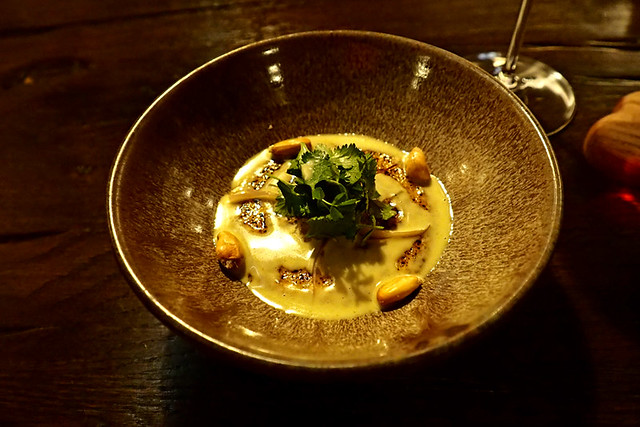 I particularly enjoyed the elevation of bread to a course in its own right, or “bread as a protagonist” as it was presented to us. Instead of the bread being something you pick at to stave off hunger while you’re waiting for the first course to arrive, at Nub it’s served three courses in. Three superb breads – svelte, buckwheat and tomato with Parmesan – were served along with olive oil and salt from La Palma, and classic Italian chicken liver pâté. 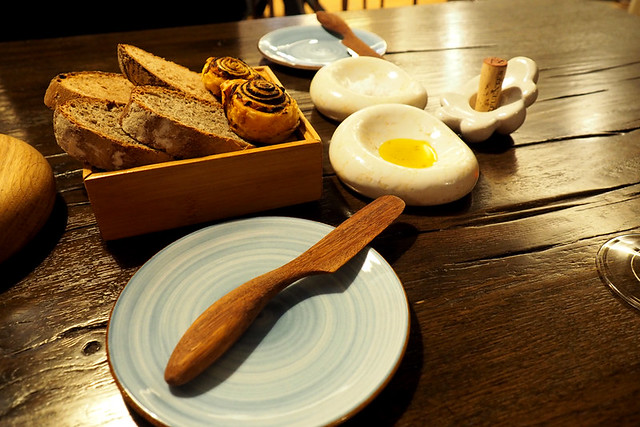 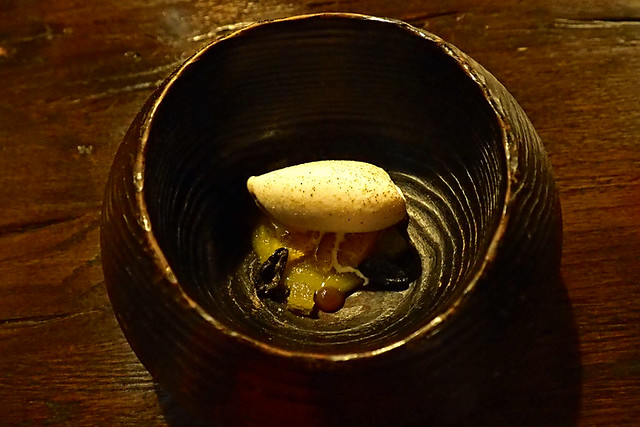 We may have been sceptical when Nub received its Michelin award but all doubts as to the merit of the star vanished over the tasting menu. The chefs have not only taken liberties with the fusion of their native classic dishes, turning an Italian summer salad into a dessert and teeming tiramisu with torrija, but they’ve turned the menu around, elevated bread to a main course, and played with the presentation providing a strong sense of theatre to accompany the meal. And they end the experience with a rather nice little surprise which I won’t give away here. 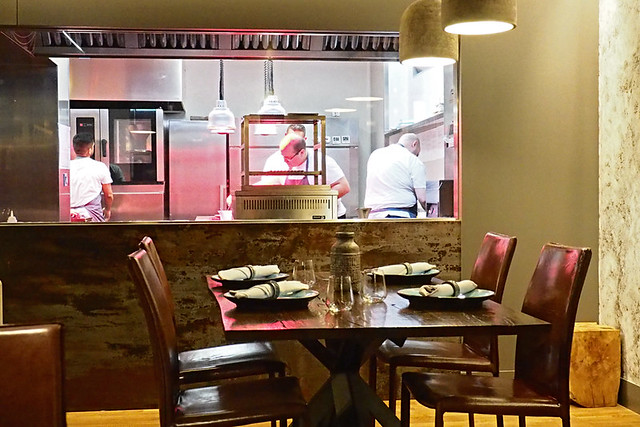 The combination of a night at the gorgeous La Laguna Gran hotel and a meal at Nub is a winning combination for a special occasion and turns any old Wednesday into an occasion.