Many years have passed since I last climbed into a saddle, years that may have done nothing to diminish my ability to ride but have done a great deal to strip me of my self confidence, a factor that would inevitably take its toll before the day was done. 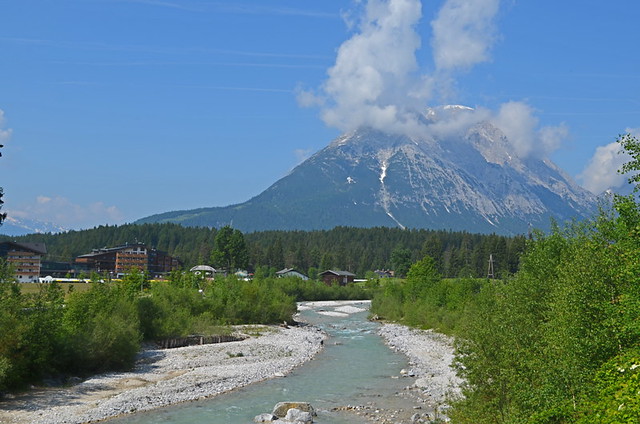 The fertile Leutasch Valley which sits at the foot of the Wetterstein Mountains in the Austrian Tyrol is about as flat as you’re going to find in Austria making it perfect for days of wheels and wanderings without too much sweat.

This wasn’t the first time I had actually been in a saddle since my teenage years, I had a short but memorable ride in the Pyrenees a couple of years ago as part of a brochure shoot for Inntravel. It’s fair to say I was pretty rubbish at that time and I had no reason to expect I would be anything different now. But setting out from the Hotel Kristall in the warm sunshine, along a tranquil riverside path surrounded by forests of fir trees that run down to crocus covered meadows, the years slipped away and I rediscovered the joy of cycling. 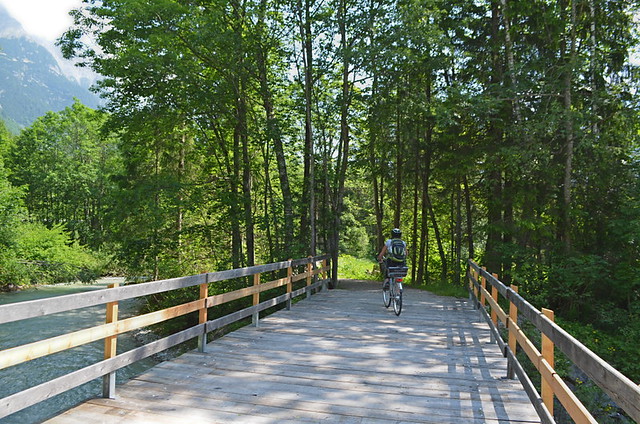 Arriving at the Leutascher Geisterklamm 11km later, I followed the ethereal directional finger of the cartoon ghost pointing me to the entrance of the Spirit Gorge and, exchanging wheels for feet, tethered my steed and entered the gorge.

Over millennia the Leutascher Ache has cut a deep ravine into the mountains on its way to join the Iter at Mittenwald. A decade ago, steel walkways were embedded into the sides of a 3 kilometre stretch of the gorge enabling visitors to walk above the torrent in search of the trickster spirit that allegedly resides in the depths of the whirlpools, waterfalls and strange rock formations that populate the canyon.

Dotted along the platform trail are interactive displays that tell of the pranks of the spirit of the gorge and his goblin associates, and invite young visitors to peer down into maelstroms, listen through an oversized earpiece to spirit conversations and dare to enter a dark cave guarded by red eyes peering out from the dark. For the grown ups, it’s the simple beauty of the gorge and the thrill of being suspended over a 110 vertical meter canyon that enthrals. 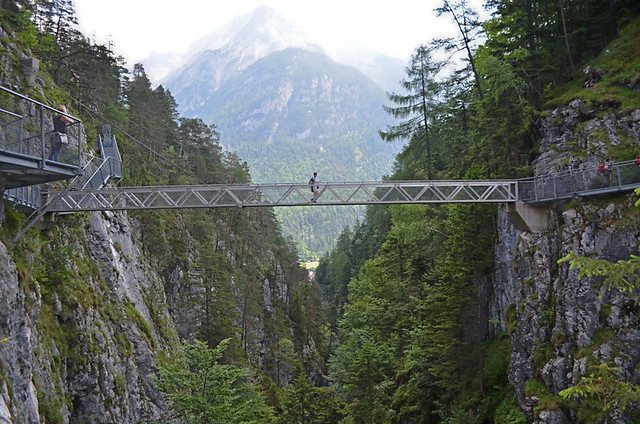 Descending along an Ice Age history trail that crosses the boundary into Germany, I arrived at the lower gorge where a wooden walkway placed just a couple of meters above the fast flowing torrent extends ever deeper into the smaller ravine whose walls close in, eliminating the sunlight and casting a foreboding gloom. In this gorge there are no Casper-esque images of cartoon ghosts or quaint tales of goblins that dance in the night or the spirit that flies over the meadows leaving a trail of singed grass in his wake. Here, if there is a spirit he’s an angry one, his deafening roar bouncing around the glistening rock face and his spit drenching me with icy water. I made my way to the end of the walkway and peered around the rock to see and feel the full force of nature as a waterfall plummets 23 metres, crashing onto the rocks below with a thundering boom. 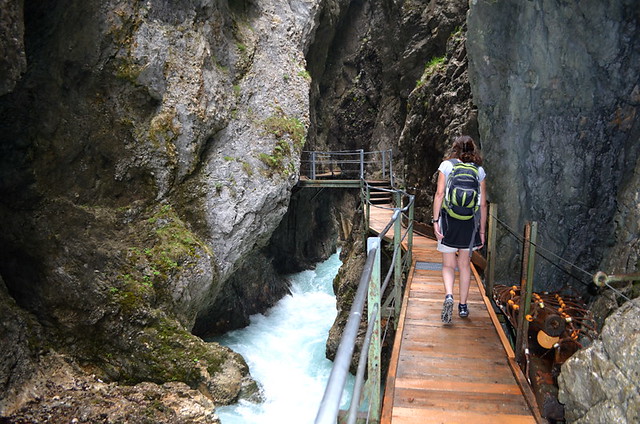 Bolstered by the outward ride, safely out of the clutches of spirits and back in the saddle, I decided to detour from the return route in order to avoid an overlap with a walk I was doing the next day. Everything was going really well until the stony path I was following reached a steep dip. It was nothing that an experienced cyclist would even hesitate at and I could see that it was only short but as I gathered speed, the ruts in the gravel got deeper and more frequent and, like a will-o’-the-wisp, the thought suddenly entered my head that I could fall. In the split second that I allowed that thought in, the front wheel jammed into a rut and over I went, hitting the ground with a painful scrape of leg against gravel.

Picking myself up and sheepishly completing the hill on foot, my bike skittered along beside me, its wire basket bouncing above the back wheel with a noise that sounded oddly like laughter. Damn those pesky spirits. 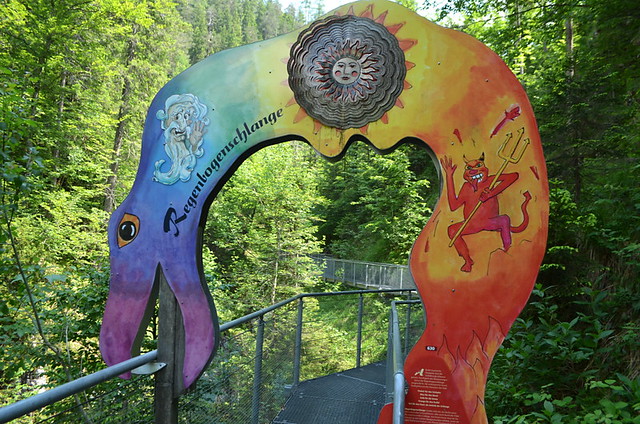 The Leutascher Geisterklamm is unsuitable for pushchairs, prams or dogs. Cycles are not allowed on any part of the trails, and vertigo sufferers should avoid the walkways in the actual gorge and the suspension bridge that crosses it. There is an alternative route that skirts the gorge but obviously, it’s not as spectacular.

Entrance to the spirit gorge is free but there is a charge of €3 for adults and €1 for children to get into the lower gorge. Parking at the entrance to the gorge is €5 for cars.