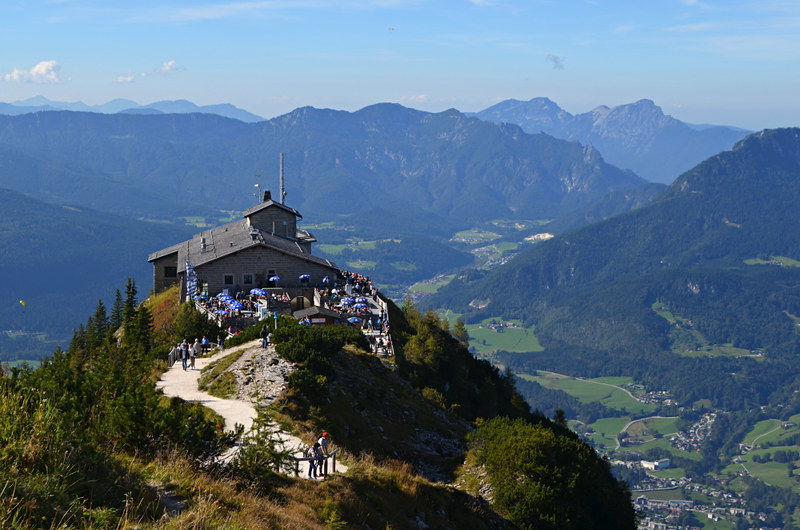 The bus lurches around the endless hairpin bend as it rises ever higher up the sheer rock slope, its floor at a gravity-defying angle and its seats restraining the passengers who would otherwise be piled in a heap beneath the rear window. From my cliff side, front row seat, the road is hidden beneath the nose of the bus so my gaze is perpetually over an abyss that plunges alongside granite mountains, to the green valley floor below.

Disgorged onto a platform 120m below the summit, a wall of rock stands between me and my goal, and the only place to go, is into the mountain.

No more than the width of four people walking abreast, there’s an oppressive atmosphere inside the mountain tunnel, not enhanced by the faintly dank, musty smell. My footfalls echo as dimly as the yellow light that casts its unhealthy pall across the brick walls and stone floor. Despite our number, the only other sound is the regular crack of metal-tipped cane hitting the ground. 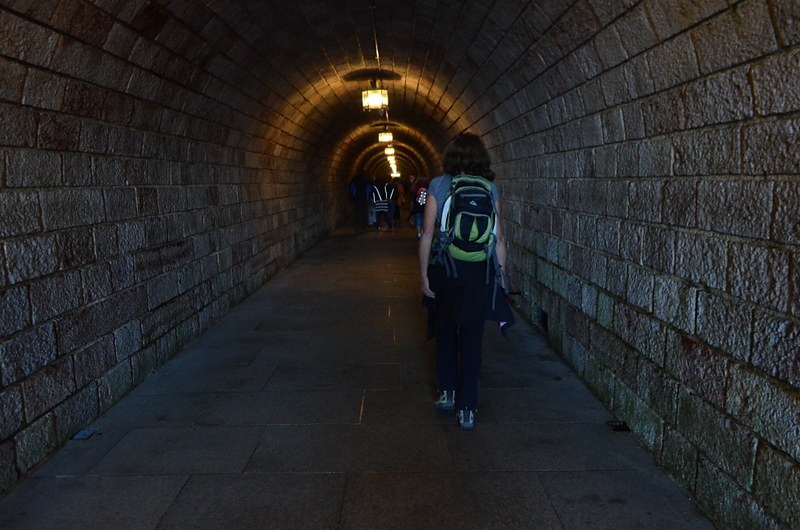 As people around me pause to capture ghostly selfies along the way, I make my way closer to the steady thwack of metal on stone. Moving slowly, yet remaining at the vanguard of the crowd, a man walks, his right hand bringing a tall staff down on the ground beside him with unnecessary force. I watch as the people walking behind him make small gains on his lead, and as they draw near, the staff is brought down with even greater force. They fall back and let the gap resume.

I look for signs that the staff’s bearer is an official of some sort, a tour guide maybe, or a group leader. But other than his Gandalf-esque stick, he just looks like every other person in this tunnel. I don’t slow my pace and quickly draw level with him. The cane is brought down with such force that I fear it may cause a rockfall but I keep moving, my eyes steadfastly forward. By the time I reach the elevator, my pulse is racing. 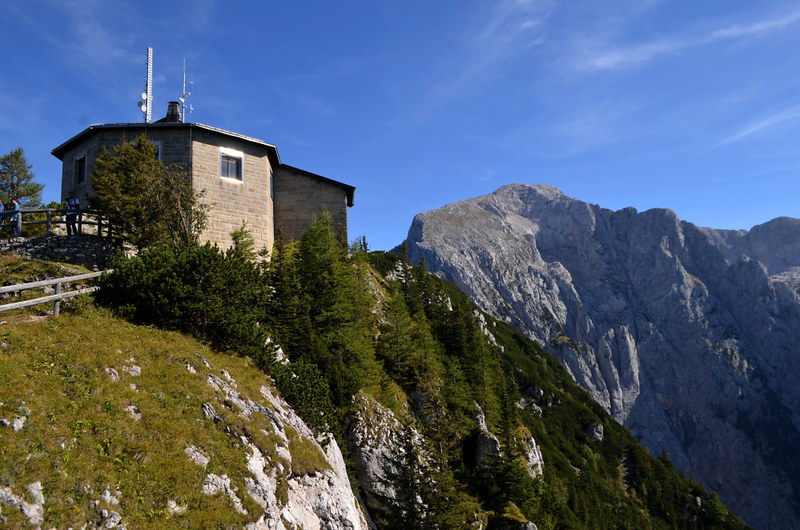 Gifted to Hitler as a 50th birthday present, the Kehlsteinhaus, or Eagle’s Nest as it was nicknamed by US troops, is a remarkable feat of engineering. Perched on the summit of a previously inaccessible mountain, 1000m (3280ft) above the valley floor in the Bavarian alpine idyll of Berchtesgaden, 3000 men worked day and night through 1937 and into the spring of 1938 to complete it in time for the Führer’s birthday celebrations in April 1939. Carrying 50 kilo loads of supplies on their backs and dangling 600m (2000ft) above an abyss, 12 of those men lost their lives during the project. And all so Hitler could present a face of beauty and tranquillity to his diplomatic visitors in a venue as spectacularly picturesque as the plans that were being hatched beneath its façade, were grotesque.

In 1928, Adolf Hitler moved to the traditional Bavarian pastoral hamlet of Obersalzberg which sits below the Kehlstein mountain, renting a farmhouse from where he finishing writing Mein Kampf. In 1933 he bought a farmhouse of his own and called it the Berghof. In the ensuing years, Hermann Goering, Martin Bormann and Heinreich Himmler all acquired property in Obersalzberg, and residents were bought out of their homes as properties were converted to barracks, workers’ houses and administrative buildings. Beneath the surface of the gentle mountain, a matrix of tunnels, storerooms and bunkers were constructed.

Obersalzberg had become the second HQ of the Third Reich and Hitler spent more time at Berghof than he did in his Munich HQ. 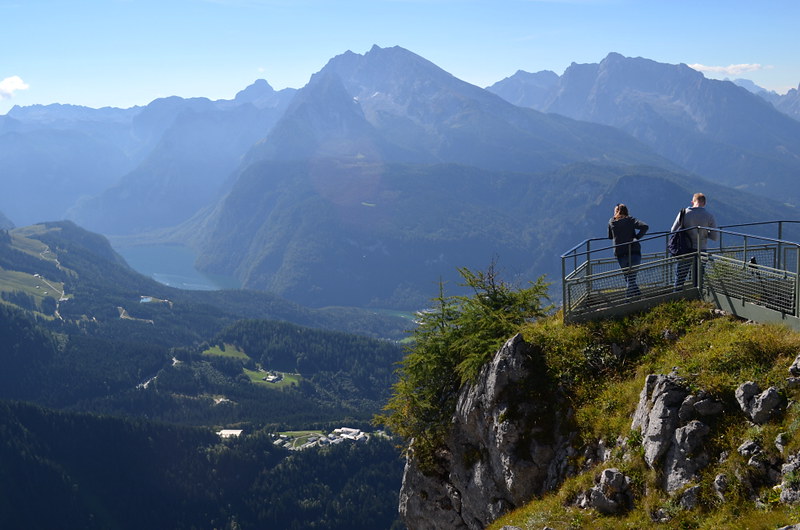 Stepping out of the elevator and into the sunshine, it isn’t difficult to lose the crowds, most of whom head either to the summit or to the restaurant terrace. Dropping down narrow steps at the side of the building, a path descends to a viewing platform jutting out over the gorge and just above it, away from the path, a small, unoccupied bench sits in the sunshine.

The consummate panoramic lunch spot, the Berchtesgaden National Park spreads its splendour below, from the emerald sheen of Lake Königssee at the foot of the Walzman mountain, to the Alps, the Salzburg basin, and beyond. Riding the hot air currents, a paraglider drifts across the scene, his crimson sail incongruous against the shimmering blue green background, like a tear in the diorama. 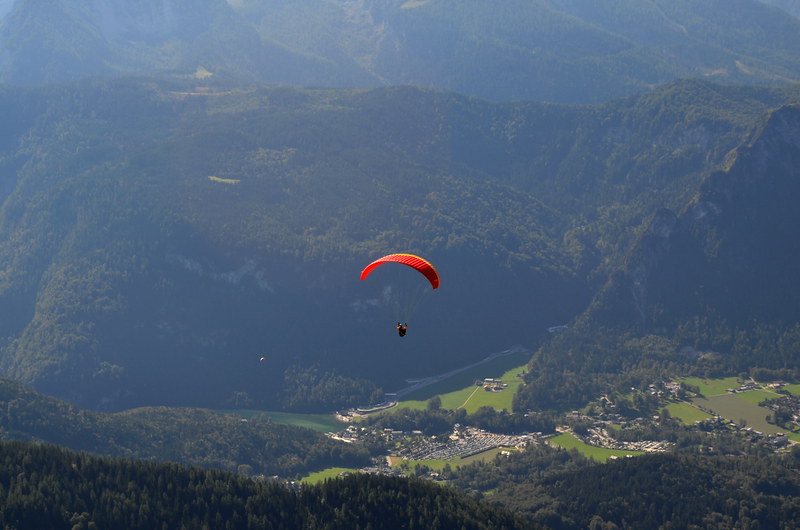 Mesmerized by the surroundings, it’s difficult to reconcile the Kehlsteinhaus with its past, yet hugely gratifying to see the house, the grounds and the viewing platforms overrun with multi-ethnic, multinational visitors, testament to the abject failure of the National Socialist Party’s plans.

Ironically, despite the vast monetary and environmental cost of the construction of the Kehlsteinhaus, its 6km serpentine access road, 123m(406ft) tunnel and brass lined elevator, all constructed to take Hitler safely to his mountain top showhouse, the Führer rarely spent time here. His vertigo never allowed him to fully appreciate the splendour of the location and his claustrophobia made him feel decidedly uncomfortable in the tunnel.

There was something palpably unnerving about that tunnel.

Kehlsteinhaus is open from mid-May to October, weather permitting. There are only two ways to access the mountain top, either by a demanding, 2 hour slog on foot, or by one of the special buses that ferry visitors up the serpentine road from the Dokumentation Centre on Salzbergstrasse. From Berchtesgaden, follow the Obersalzberg road to the Hintereck parking area, clearly signposted. Buses from there to the Kehlsteinhaus cost €16.10 pp return (€14.60 with a Berchtesgaden Gästekarte) . There is no charge for entry to the site of the Kehlsteinhaus but admittance inside is by special permission only.

Five Ways to Enjoy Gourmet Food on a Budget

We’re alert to every opportunity to sample top notch food at rock bottom prices. These are just five of the ways we’ve found to enjoy gourmet food without crippling the credit rating… […]