Chania on a Saturday night and we’re faced with an overload of what might be described in guidebooks as ‘inviting harbourside tavernas serving authentic Cretan cuisine’. Most of them display exactly the same menu. Pumpkin heart baked with feta cheese and herbs is not on any. 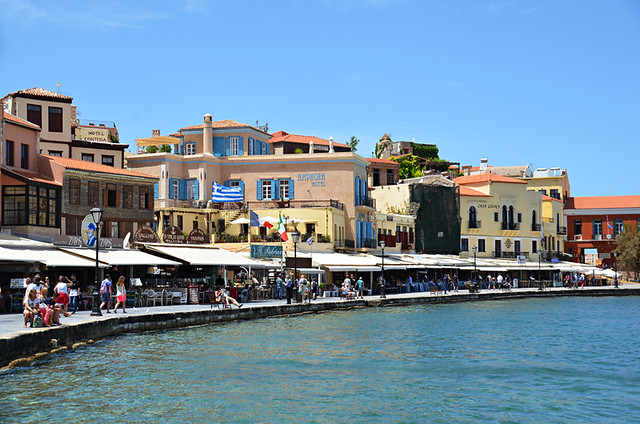 Every so often we’re approached by an affable Cretan who engages us in small talk before getting round to his objective – trying to persuade us to choose his restaurant over all the rest. He does this by reeling off all the authentic dishes on the menu, the same authentic dishes served in the restaurants on either side.

He’s a nice guy, they’re all nice guys, and I’d never dream of being rude to someone trying to honestly earn a living. I say “we’ll think about it” and we move on. What I really want to say is “Why would I choose to eat here? Your menu is exactly the same as a hundred others. It shows no innovation, no creative bent on the part of the cook (note: cook not chef). I’ve been eating from this same menu for two and a half weeks.” 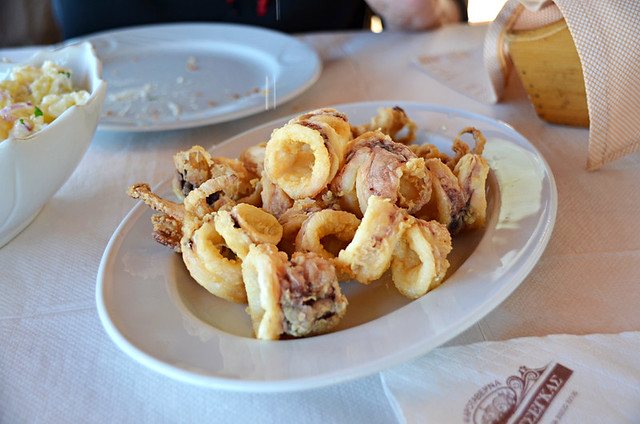 Before anyone gets all prickly and castigates me by pointing out how diverse and wonderful Greek gastronomy is, I already know. I love Greek cuisine. We cook Greek food on a regular basis. This is an interchangeable gripe. It could be aimed at any number of destinations where most local chefs and restaurateurs never stray from the ‘authentic local food the way grandmother used to make it’ path.

Talk of a rural Crete taverna which breaks the mould
On a drizzly day in a volunteer information centre below the ancient hilltop city of Polyrinia, the two British residents running the cosy coffee sanctuary talk to us about off the beaten track places we ‘must’ visit whilst they play a weird version of gin rummy and sip steaming coffee. One of them nurses a mug which says ‘Still hate Thatcher’ on the side. 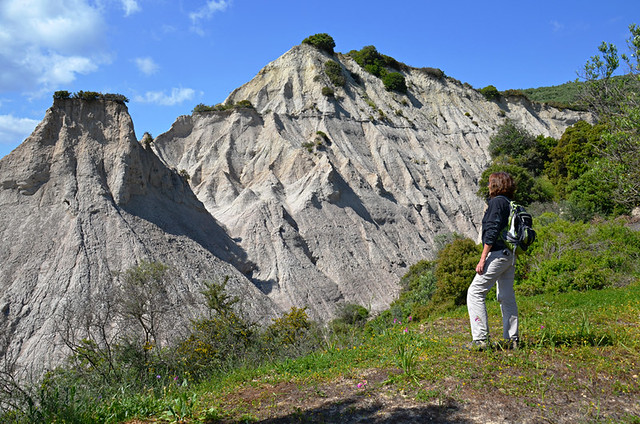 One of the ‘musts’ are natural white pyramids. Another is a taverna at the top of the Anidri Gorge, a place which serves food that is “ delicious and a bit different”. It’s not the first time the restaurant has been recommended, usually accompanied by the person who’s doing the mentioning going all dreamy-eyed as a memory forces an involuntary lip lick.

Our taste-buds perk up. We’re due to walk the Anidri Gorge.

Straying from the traditional path at the Anidri Gorge
From a kafeneion (Greek coffee house) decorated with a washing line of powder blue gourds, we follow a trail that takes us past agricultural hamlets and olive groves where black nets carpet the ground, obscuring the path at one point. As we climb, the silver groves give way to open rocky hillsides where vultures glide by at shoulder level and goats gorge on wild flowers, ignoring the bizarrely beautiful stinky lily, for obvious reasons. 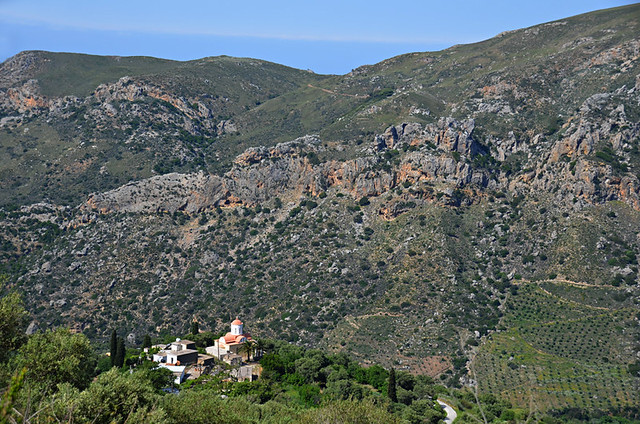 At the village of Azogires we pop into the Alpha café to ask about an art gallery opposite, on the basis an art gallery in a tiny rural Cretan village deserves to be asked about. Another artist with a soft Scottish accent,Linda, introduces us to Mr Lucky, the owner of the eclectic café. It’s as much a mini agro-museum and place to pick up all manner of local goodies; from herbs and honey to olive oil and wine in plastic bottles. Mr Lucky is a jewel-rich mine of useful information and with his walrus moustache and shepherd’s crook he makes the eccentric café seem almost mundane. 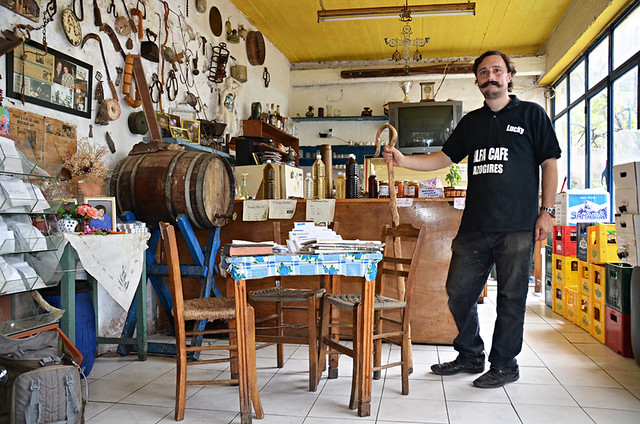 The place is known for producing particularly scrumptious omelettes filled with a mix of secret ingredients; a recipe originally created by Mr Lucky’s grandmother. Sadly our timing is out; we’re too early for lunch so finding out why Alpha’s omelette is so sought after has to be put on hold. Mr Lucky sends us on our way with a gift of a bottle of wine and details of a detour to a waterfall and Venetian bridge, an enchanting diversion which eventually hooks up with our original route at the Monastery of the Holy Fathers.

Our timing when we descend to to the hamlet of Anidri at the head of the gorge of the same name couldn’t be better. We’d been warned it might be difficult to bag a table at Kafeneio sto Scholeio, but there are still a handful free in the shady courtyard. 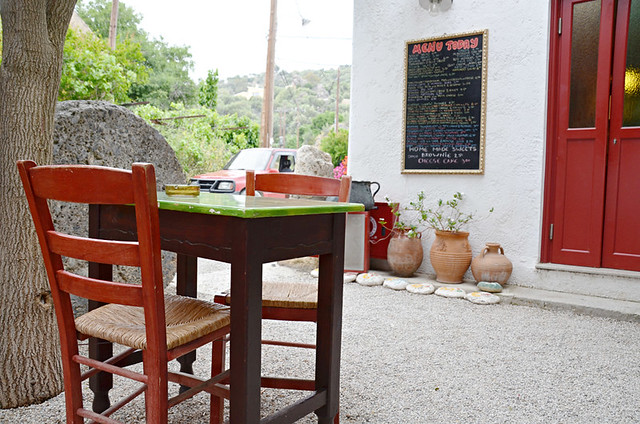 Blackboards with dishes written in multi-coloured chalks come in two languages, Greek and English. There is dakos salad (lilac chalk), fennel pie (also lilac) and kalitsunia (yellow)… and there is also pumpkin heart baked with feta cheese and herbs (olive) plus many dishes that are strangers to other traditional menus.

After much deliberation we order lentil purée with carrot, potato and walnuts (orange), and a slice of fig, blue cheese, and walnut tart (olive). By the time our luscious lunch arrives (leaping effortlessly over expectations) there are no other tables to be had. The place is bursting with a blend of hikers, independent travellers and locals. 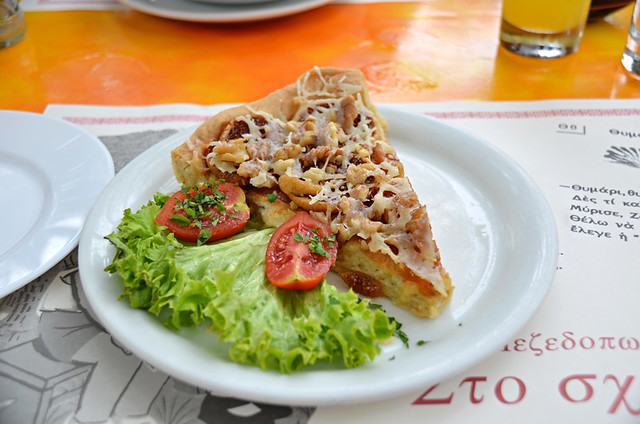 This traditional menu with a delicious difference has inspired a wide range of people to make a pilgrimage to dine at Kafeneio sto Scholeio.

Attracting customers by being traditional and yet different is a priceless penny which will never drop with many, many restaurateurs in countless destinations across the world.