Some ferry crossings are functional, others feel more like the launch pad for a holiday. The little roll-on/roll-off affair taking us to the long sandy finger of the Troia Peninsula fell firmly into the latter category.

Uncorrupted blue skies and the sun dancing across the mirror-calm surface of the estuary helped fuel a snowballing feel-good factor. Mid March and temperatures heading towards the mid 20s had us applying factor 50 sun-cream in a bid to prevent our faces taking on the same hue as the Coca-Cola adverts on the ferry’s wheelhouse. 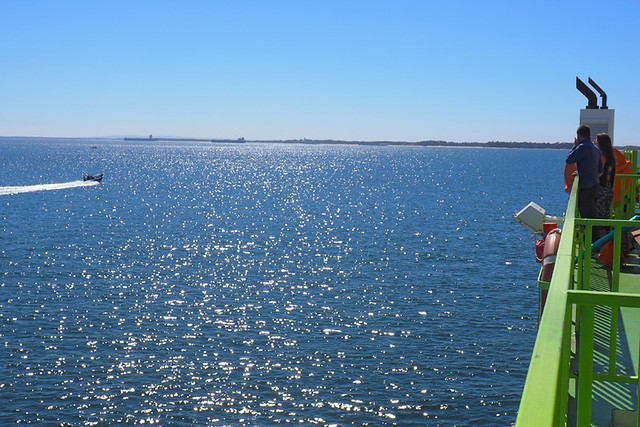 It was the second time we’d made the crossing. The first was on the passenger ferry which deposited us at the soulless mini resort on the tip of the peninsula. We hadn’t taken to Troia resort, but an exploration beyond its boundaries to Roman ruins alongside a lagoon suggested there was more to the 18km narrow strip than its bling-tinged tourism development. We decided an interesting way to revisit would be to take the car ferry across and drive back to Setúbal, stopping anywhere which caught our interest along the route

The car ferry drops its cargo further along the strip, bypassing Troia, prompting us to ponder why the handful of other people were making the crossing. I guess the answer is that 25 minutes sailing is far quicker than driving 100km to reach what is ostensibly a remote part of Alentejo. 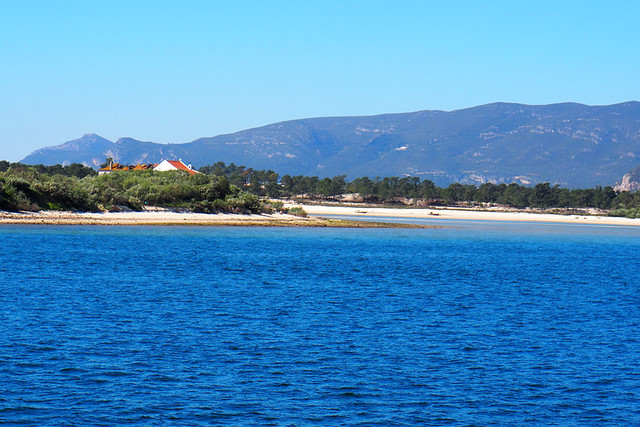 Although no distance as the crow flies, the transformation between bustling Setúbal and the sparsely populated, tree-fringed, white sands on the other side of the estuary was astounding. Within moments of disembarking we were on our own, driving along the one road which dissects the narrow finger of land, flanked by stone pines and cork oaks. Occasionally the flimsiness of the peninsula showed itself, views on one side revealing the benevolently calm Sado Estuary whilst, little more than a stone’s throw away in the opposite direction, high sand dunes obscured views of the friskier Atlantic beyond.

Within fifteen minutes we reached the first stop on our mini road trip. 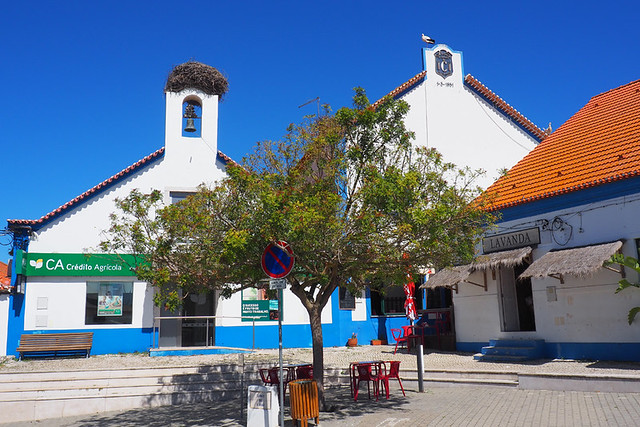 Cool Comporta
Comporta made world news after Madonna rode her horse along its beach. Some people had told us it wasn’t the place it once was, too many holidaymakers flocking to its beach in summer had pushed prices up. I expected a smart resort.
It quickly became apparent the Comporta in my head didn’t match the reality of what was a small, traditional village surrounded by paddy fields. In March there were more storks lounging around on nests built on orange-tiled rooftops than there were people. There was no bling on show, but there were hints of a more bohemian vibe than is usual in a rural Alentejo town. The music emanating from the handful of cafes open out of season was a mix of cool jazz and world fusion. It felt down-to-earth, albeit in a casually sophisticated way; it was mostly local workers who populated the cafes and restaurants. We plonked ourselves in one, enjoying sounds which were a mix of reggae, country and what sounded like chocobo racing music from Final Fantasy VII. At €18.50 for sandwiches, drinks, and cakes prices were higher than the ones we were used to on the other side of the estuary. 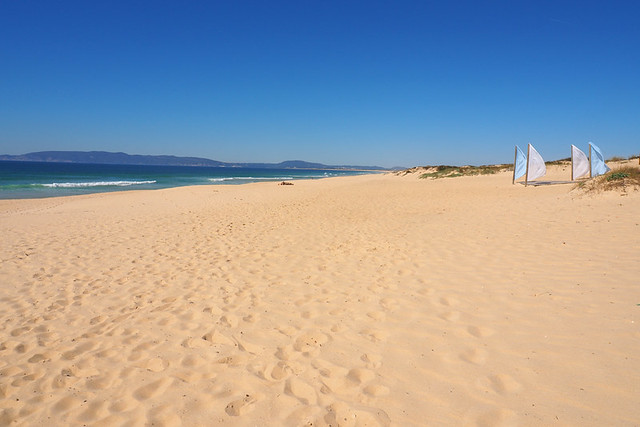 The thing which surprised me most was Comporta isn’t actually on the coast. The beach itself lies a couple of kilometres away from the village. It is an exceptional beach, a world champion of beaches. And this is in an area which boasts as good beaches as I’ve wiggled my toes in anywhere. It’s the sort of endless beach associated with exotic, far flung destinations… if you’re northern European.

Seclusion at A Serenada
The idea had been to stay overnight in Comporta before swinging east. But a photo of an ‘I want to stay there’ room in a rural hotel further south had bewitched us. So we detoured to O Serenada near Grandola, a workaday town whose name is famous for its association with the Carnation Revolution. 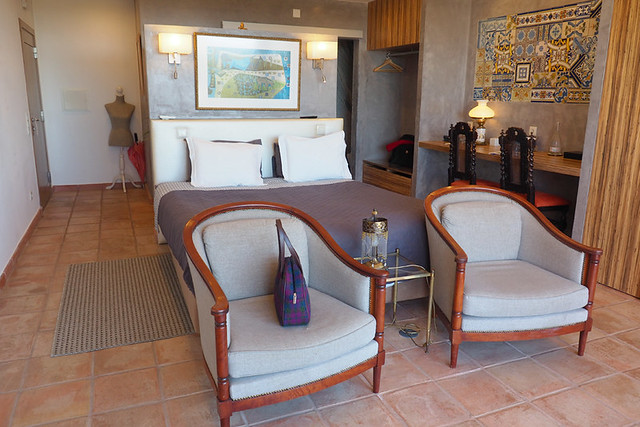 Set on a hill, surrounded by vines and forest, and with views which swept all the way to the hills of Arrabida, O Serenada was another surprise; again feeling as though it belonged somewhere more exotic than western Europe. It reminded me more of a lodge in Africa than Alentejo. We were welcomed with a glass of their own crisp and distinctively delicious white wine, which we sipped from the comfort of decking beside a narrow infinity pool above a forest canopy as endless as the golden beach along the coast. 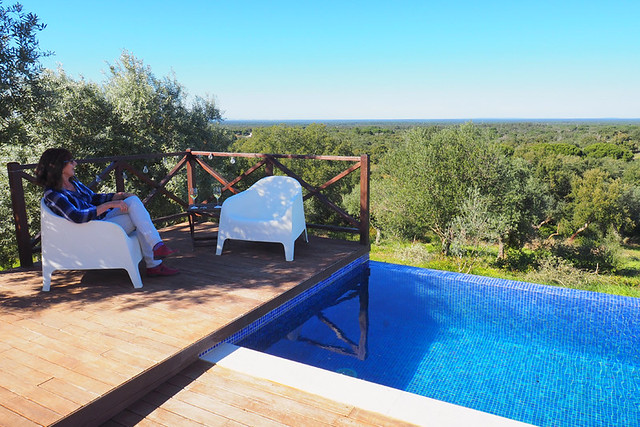 Once ensconced in our gorgeous room we would happily have stayed rooted to the balcony, hypnotised by the shimmering view, until it was time to check out. Except, in order to eat, we had to negotiate 1km of dirt track, 3km of single track road, and then 7 minutes on a ‘proper’ road to get to the restaurant we’d already booked a table at in Grandola. 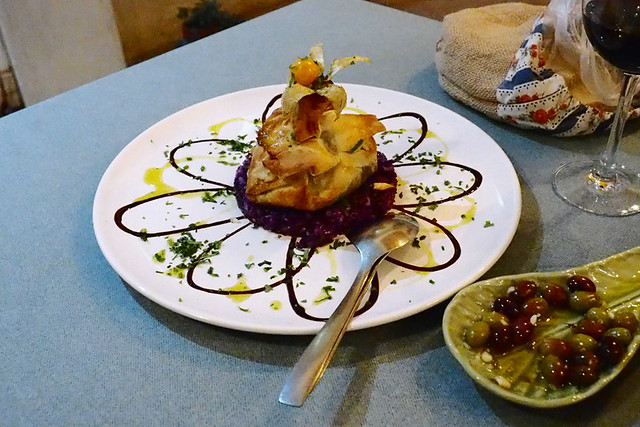 Taberna d’Vila was the sort of restaurant we look for first wherever we travel – a place with a creative chef who reboots traditional dishes to give them contemporary pizazz. We worked our way through quite a few Alentejo menus when we’d stayed near the border with Spain, but still had to ask for assistance to explain some unfamiliar dishes on Taberna’s menu. As the starters sounded more interesting than the mains, we ended up with a quartet of them – steak tartare; mushrooms stuffed with presunto (cured ham) and quail eggs; morcela and apple in a pastry parcel; and, best of all, alcofa de cozido à Portuguesa which is a traditional stew (not Taberna’s version). Although overfull, we squeezed in lemon meringue pie (because it was there) and pine ice cream with sweet migas (because the waitress told us it was good). 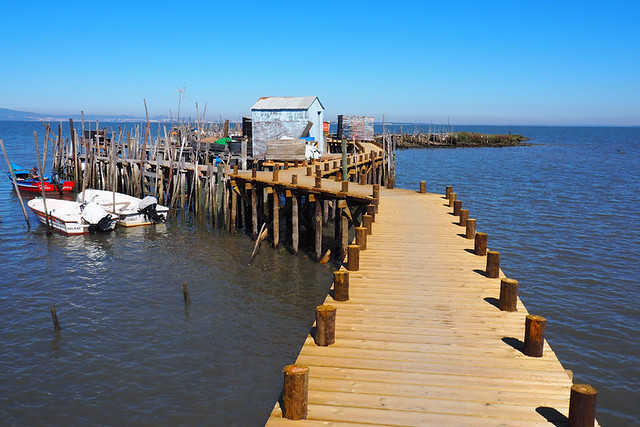 Dogs and fishermen
I’d wanted to visit Carrasqueira ever since seeing stunning sunset shots of its rickety, wooden jetties at an exhibition. The town, separated from the estuary by rice fields, had a frontier, back of beyond air about it – air also filled with the aroma of fried fish from the handful of restaurants around its dusty centre. As well as fishermen, Carrasqueira was a town of dogs. Packs of them marauded, in a friendly manner, around the town, snuffling and generally doing doggy things. The jetties themselves were as intriguing and as ramshackle as I’d hoped, some consisting solely of old palettes stretching into the mud banks. Their central walkway had been recently renovated, allowing us landlubbers more stable access to the farthest point. It felt as though it belonged somewhere far removed from civilisation, even though we could see the port at Setúbal just across the estuary. Carrasqueira was one of those wonderfully quirky places which felt slightly out of kilter with the world around it. 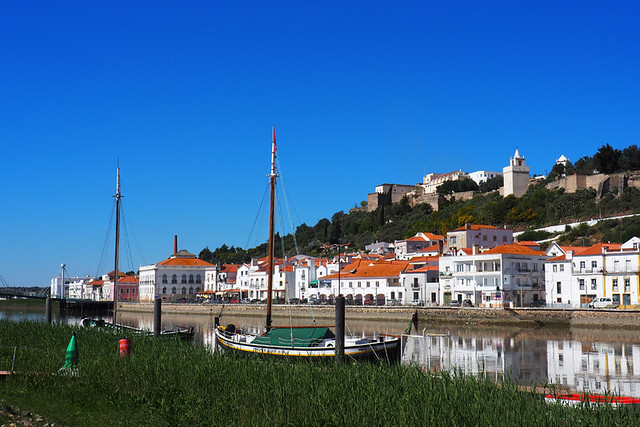 On the river
Our penultimate stop was the one place on the trip we’d visited before – Alcácer do Sal, a perky, pretty little town which sits on the northern bank of the Sado River. On sunny days, the scene from the iron bridge leading to rice fields on the southern side of the Sado is resplendent, the town and castle above it reflected in the river’s waters. With restaurants lining the riverside promenade, and river boats berthed opposite, it reminds me a little bit of a mini Porto. 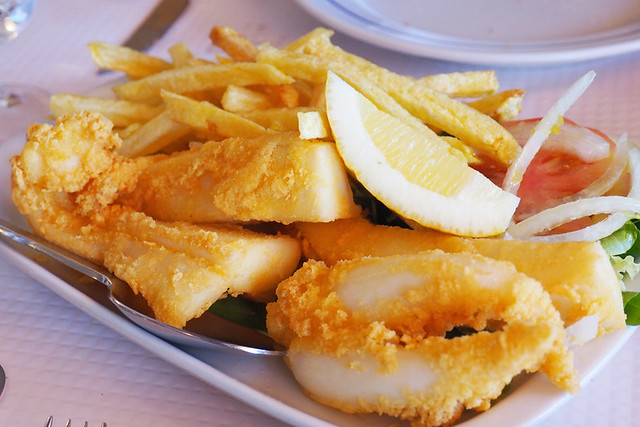 Lunch by the estuary
Our timing was slightly out for eating lunch in Alcácer do Sal – apart from it being too early we were still too full after breakfast at A Serenada. Instead, we continued to Pérola da Mourisca which is closer to home (10 mins). It’s one of the most popular restaurants in the area, so it was a lottery whether we’d get a table. But, despite it being packed with locals as usual, we got lucky. Really lucky as the one table which came free at the right time was beside the window.
Over a lunch which included salty, snowy-white sheep’s butter with chunky bread, choco frito (fried cuttlefish), and our first (but not last) tasting of arroz de pato (duck rice) we relived the highlights of our short road trip. We’d crossed an estuary and a river; travelled through a forest which had sprouted from the sand; warmed our toes on one of the most glorious beaches we’ve ever seen; stayed in a dream of a location; strolled through a vineyard; skirted rice fields populated by ibis, heron, storks and egrets; and wandered through the cobbled and dusty streets of historic towns and a quirky fishing village. We’d even spotted ostriches near a place called the Gambia.

That’s a bulging suitcase full of wildly contrasting travel experiences for just 100km of driving. As road trips go, this mini one had been quite phenomenal.

Theatrical marble faces smile down from atop their gold pillar pedestals whilst antique looking Flemish mirrors lend the long and quite narrow interior the illusion of width. […]