The water is like silver glass…except for a few arrow-shaped ripples fanning out across the centre of its great expanse. I know it’s impossible, but somebody has to win the lottery don’t they, so why not me?

I sit upright and follow the line of watery arrowheads, glistening in the sun, to their point as one hand reaches for my camera. There’s a piercing cry as the creature at tip of the arrow takes to the air – a seagull. No humps, bumps and diplodocus shaped head for me to photograph, not this time anyway.

I defy anyone to sit on the banks of Loch Ness and not to gaze in vain hope at those dark and oh so deep waters. In these troubled days the World needs a bit of magic more than ever and the idea that lurking in some cavernous lair beneath these waters is a creature that has teased man for centuries keeps the notion that fantastical things exist in this world alive…just. 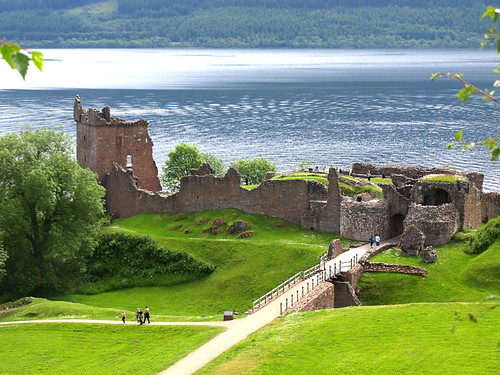 I’d forgotten how beautiful the Highlands of Scotland are. When the sun is caressing your skin and the midges aren’t, there can be few places on earth whose beauty is of such intensity it can make your soul ache.  Add a loch that stretches forever, both in length and in depth, and a ruined castle whose crumbled walls have endured a thousand years of bloodshed and you have a package that is nigh on unbeatable – and that’s before a mythical monster is thrown in.

The castle in this case is Urquhart Castle, standing on a promontory jutting out into Loch Ness. It’s seen better days but it still stands proudly, an icon of skirmishes between warring clans and historic battles with the auld enemy that raged for centuries. Ownership switched between English hands and Scottish until Robert the Bruce took control when he became King of Scots. It fell into ruin when, after a bloody battle in 1692, soldiers blew up the battlements. Nowadays it remains a scenic landmark and an on-site visitors’ centre is a mine of information about the history of the area. But it’s the legends about a particularly big beastie that interest me more.

Apparently if you’re going to be in with a chance of spotting Nessie, Urquhart Castle is the place to be. Local tales claim that the monster (and family) live in underwater caves way, way below the ruins. Most sightings do take place in this area. St Columba apparently encountered the monster near here in 580AD on his way to Inverness from Iona and only saved himself and his crew by making the sign of the cross (clearly it has vampire tendencies). But one of the stories I like the best is that it was actually Nessie in a rage that destroyed parts of the castle.

I didn’t spot Nessie that day. He/she only appears about once a year and a couple of local shopkeepers had bagged this year’s spot just over two weeks before I arrived. Only slightly disappointed at not being the first person to snap a clear picture of Nessie on camera I relocated to the nearest village for some compensatory refreshments where, lo and behold, I stumbled across undisputable proof that the creature does exist.