Looking out from the breakfast table at one side of the garden is like standing in front of a 360°, life-sized, Constable canvas. 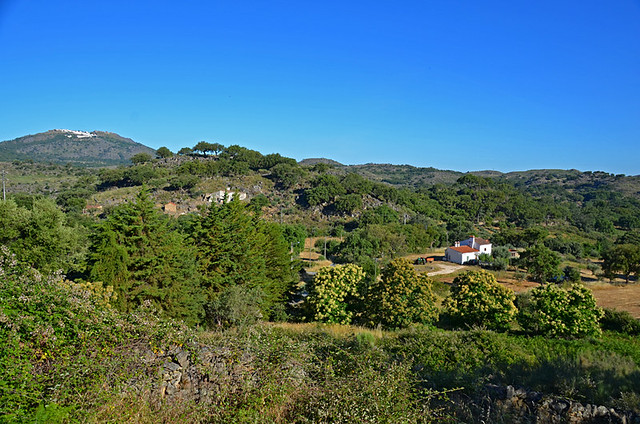 The house is situated in the heart of the São Mamede National Park. It sits almost at the top of one side of a valley populated by no more than half a dozen properties set sparsely within a tapestry of greens and yellows, punctuated by gnarled oak trees, ebullient pine trees and fat hawthorns. Taking centre stage at the bottom of the valley is a white-walled farmhouse, half hidden by cork oak and olive trees. Laid out in front of it are wheat fields, grazed by cattle to a yellow stubble now baking in the hot sun. On the far side of the valley is what looks like a neglected cave house, part of its buildings disappearing into the craggy hillside. On the other side of the little, winding road from our gates, there’s a small house which stands empty, its shutters always closed.

The valley is lined by craggy ridges topped with two-tone cork oak trees, their lower limbs copper where the bark has been removed. In the distance, on a hilltop vantage stands Marvão, its cluster of white buildings contained within ancient walls and castle turrets, all except the old convent which has escaped beyond the walls and slid part way down the hillside. After dark, the town’s golden lights shimmer like a jewelled crown, the only light in the valley save for half a dozen street lamps dimly spreading into the distance, and the moonlight that throws the landscape into blue shadows. 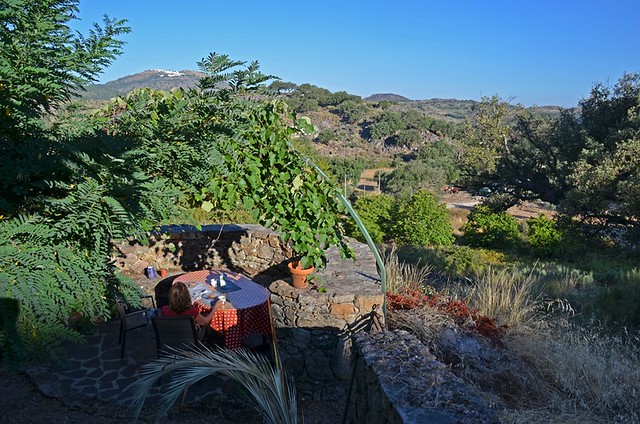 The ‘breakfast table’ sits in a semi circular promontory beneath a vine arbour heavy with grapes. Every morning we start our day here with a mug of coffee, just sitting, listening to the birdsong that echoes across the valley, enjoying the warmth of the morning before the sun climbs higher and the heat drives us to the shade. As we sit in silence, taking in the beauty around us, the sound of goat bells permeates the air, slowly building in volume until it crescendos as the flock is driven along the lane outside the gate. Regular as clockwork, renegade goats break off from the flock, climb over the crumbling, dry stone walls of the house opposite and tear frantically at the shrubs until the goatherd arrives with his piercing whoops and whistles and calls them back into line. Late in the afternoon the pantomime is repeated as the goats are herded back from their grazing ground for the night.

Our working day is dictated by the heat. In the mornings we work on the covered terrace where we can catch any breeze the day may be willing to share. By late morning the heat becomes thought-sapping and we move inside to an office we’ve created where the dining room used to be. Around 6pm we abandon our screens and seek refuge in the small swimming pool to enjoy the last of the day’s rays without their intensity. It’s the only time of the day we feel comfortably cool. 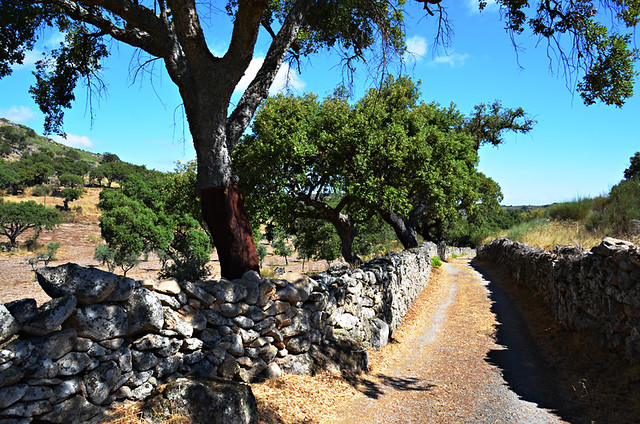 The working week is punctuated by days out. When we first got here we followed the walking paths that meander through the valley taking in tiny hamlets, Roman ruins and the strange border town of Fontañera where time gains and loses an hour in the space of a footfall. As the summer has gone on, daily temperatures in the high 30s have put a stop to walking and we’ve taken to exploring our surroundings instead; a visit to the Monday morning market in Valencia de Alcántara, a birthday stay in Cáceres, a family holiday in Albufeira. 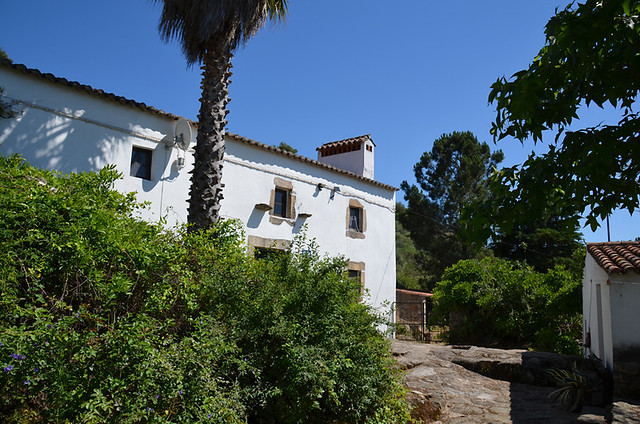 The house itself is a big, old, rambling place with exposed beam ceilings, creaky wooden floors and crooked doorways. There are four bedrooms (three of them in ‘the south wing’ which we never use), three bathrooms and two sets of stairs, one at the front of the house and one at the back. There are lots of orignal features such as sections of stone floors and the remnants of pulley systems, presumably used for suspending hay bales for cattle fodder.

There’s a garden which spreads from the front, around the side of the house and then along the back to the breakfast table. The views are hypnotic; it’s impossible to hang out the washing in the front garden without stopping to gaze across the valley, having to drag myself away every single time. The plantings are mature and rioutous with honeysuckle, bougainvillea, wisteria and pasiflora climbing terraces and walls amidst sumac, olive and fig trees. It’s a lovely place and we’re getting dangerously fond of having this much space but it’s only temporary as the current owners want to sell and we want to move closer to Lisbon. 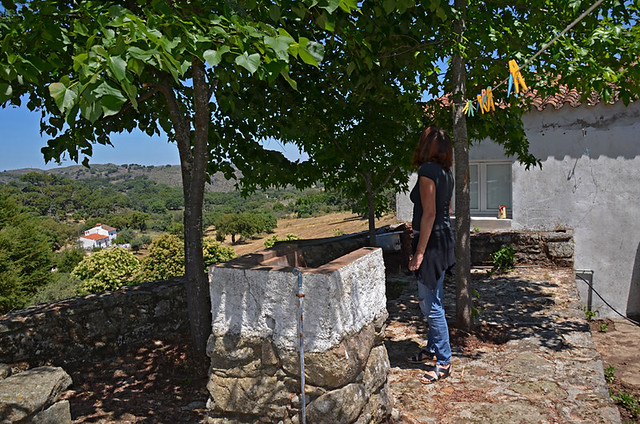 We’ve found an odd paradox about living here.
On the one hand, we’re now more connected than we’ve been for over a decade. We can get in the car and drive to Spain in less than 10 minutes, beyond which the rest of the continent awaits. A few weeks ago we drove to Évora, parked up the car and jumped on a train to Lisbon, then Porto, then Coimbra. Three great Portuguese cities and not an airport departure lounge in sight. For us, having lived on an island where travel to anywhere other than one of our neighbouring islands involved a minimum three and a half hour flight, this is giddy travel. Just getting a train has a novelty value.

Conversely, we’re probably more disconnected here than we ever were in the Canary Islands despite their geographic isolation. Our local village is ridiculously small and very quaint with the village bar, an olive oil ‘factory’ and a couple of dark doorways with beaded curtains behind which lie an artisan woodworker and a shop selling, well who knows what, we’ve never been in. The only life we ever see is a handful of men outside the bar, and a little old lady who constantly cleans her cottage while her cat sits in the road with a look of utter disdain at any car that needs it to move. And it’s unnaturally quiet. If we hear two cars going past in succession we get up to see what’s going on.

It’s life in the Slow lane, and as summer heads inexorably towards its end, so does our time here. Another move beckons, closer to the city yet still rural. Balance will be restored. Yin and yang will thrive, and hopefully, so will we.