It’s a dream, it must be. Jet lag from the long flight from the Canary Islands to Madrid to Santiago to Coyhaique followed by a pre-dawn start has left my brain befuddled.

Maybe I’m not here at all, things have been suspiciously surreal. Maybe last night I didn’t really tuck into a gladiator’s meal of steak topped by bacon and egg surrounded by an army of chips and served by a man wearing a dickie bow in a restaurant inside the town’s fire station.

The dream theory would explain why there’s a huge, wingless prehistoric bird with an ungainly gait crossing the tundra a couple of hundred yards in front of the pick-up. 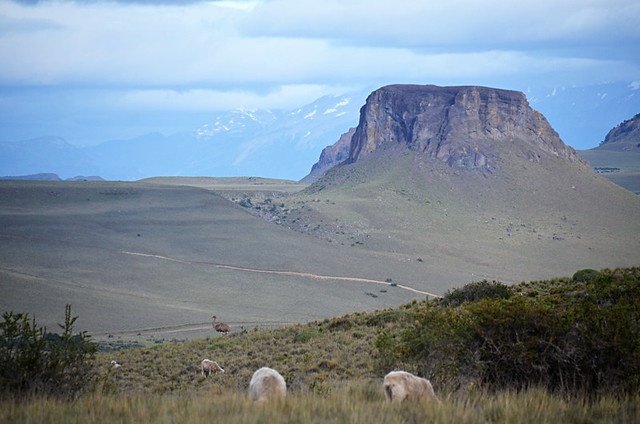 We’re crossing his small-country sized estancia (ranch) and the sight of these ancient looking birds are common to him. We’re here to spot condors rising from their cliff lairs on early morning currents. Nobody had mentioned there would be prehistoric birds as well.

The rhea fits perfectly into the sprawling plains pockmarked with volcanic table-top plugs. It’s a world straight out of Jurassic Park and realisation dawns with the day that Chile is like nowhere we’ve ever been before. 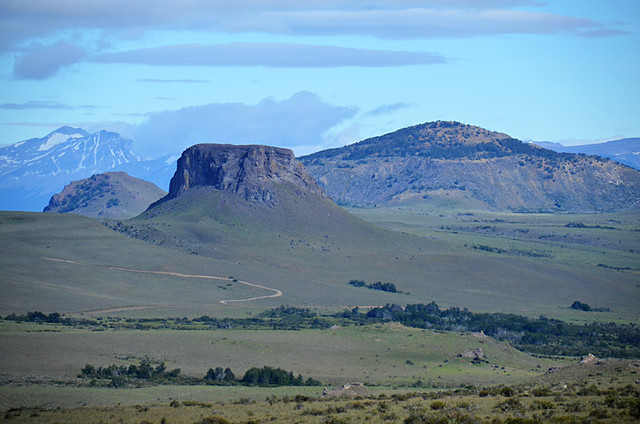 The light has an ethereal, early morning quality; similar to my head it’s fuzzy and like looking at the world through eyes which haven’t quite woken up yet. Without the sun to fill it with colour it’s not great conditions for photographs.

From a rutted dirt track road which Alejandro tells us was built by the British (not one of our greatest feats of engineering) we turn into a field (a fence identifies it as being different from the rest of the wild world around us) and the pick-up comes to a stop in the middle of a sea of low, hardy grass. It’s not the sort of location I had in mind for watching condors rise. That vision involved us standing on a dramatic cliff top rather than a flat field. 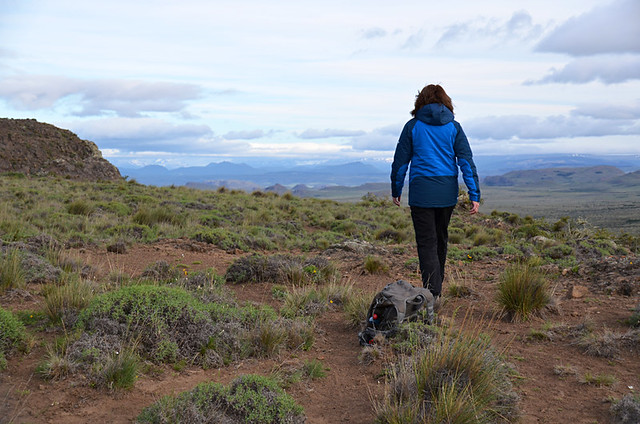 Alejandro motions for us to follow him and Tim, an English guide living in Coyhaique who’s a friend of Alejandro’s and an instantly likeable person. Tim acts as translator. Although our Spanish might be good enough to help us muddle through conversations with Alejandro, Chilean Spanish is quite different from the language we’re reasonably familiar with. We wouldn’t pick up half of what Alejandro passionately tells us about the strange (to us) world of his estancia, a ranch so big it takes three days to cross on horseback.

In a way Tim is the reason we’re in Chile. A stunning photo on Pura Aventura’s website of Tim standing arms outstretched with a huge condor directly in front of him, matching his pose, was one of the reasons we booked this trip. That’s what the power of an evocative image can do. We didn’t know it was Tim until we mentioned the image which had led to us standing in a chilly Chilean field before dawn. Alejandro was the photographer; clearly a man of many facets – farmer, photographer, leather sculptor, environmentalist. 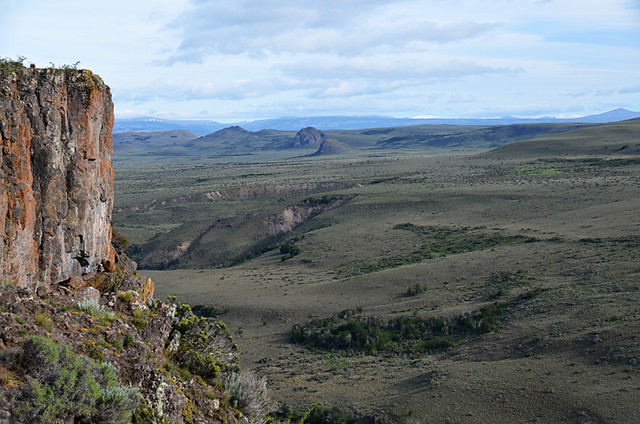 The reason for parking in a field soon becomes clear as Alejandro gestures we stop. The field directly in front falls sharply away as though a giant has sliced a chunk out of the earth. We’re standing on the edge of a cake which has been cut in half. The condors dwell in the vertigo-inducing cliff-face below us.

Or they should do. For some reason this morning they’ve been very early birds and have performed their dawn ritual of rising on the warm currents before we turned up. The exposed parts of almost numb skin scoff at the idea there have been any warm currents yet. 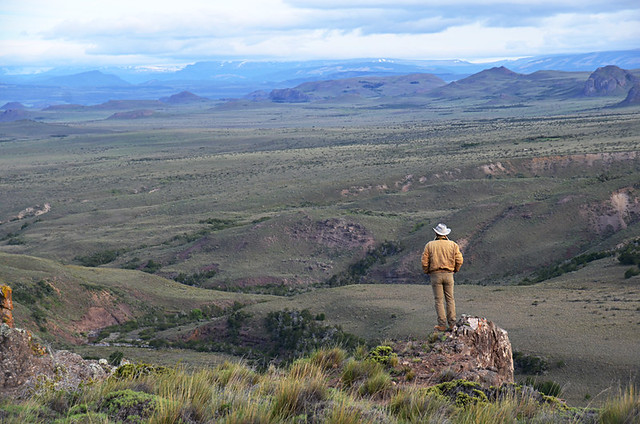 As we pump Tim for information about life in this frontier world, Alejandro takes up position on a rocky outcrop, scanning the land. With cowboy hat on head he looks exactly how I envisioned a gaucho to look. I covet that hat, the ozone is thin here and a hat like Alejandro’s would be perfect for protecting my bonce as well as, hopefully, making me look good. It turns out he bought it in Australia. Most gauchos wear a beret. Berets don’t evoke quite the same romantic imagery of a cowboy riding the range look.

Alejandro points to specks in the distance, condors. They cover great distances effortlessly, we’ve only missed them by a few minutes. We make appreciative noises, but it’s not quite the scene we’d hoped for. That’s nature, it doesn’t work to order. 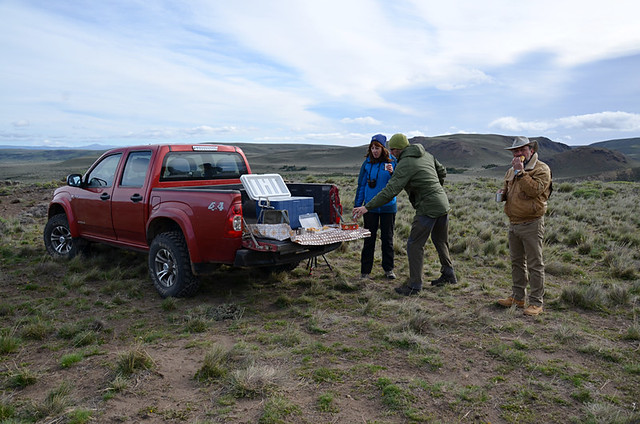 Anyway, I’m still giddy about seeing the rheas and hot, dark coffee, pastries and homemade biscuits await us back at the pick-up. I’m happy to call it a bust and wrap my hands round something warm and steamy.

Alejandro has other plans. He takes up position on another outcrop and surveys the cliffs again. Within a few moments he raises an arm and points to the rock-face below him. 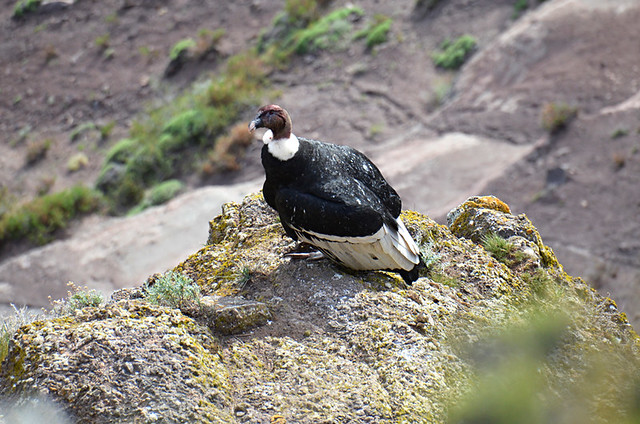 The condor is sitting on a rock, working up to joining his amigos on the far side of the plains. It’s big and ugly with a stony head that looks as though its been shorn to the quick jutting out from a white, fluffy ruff. It knows we’re watching it. A beady-eyed rather unnerving glance in our direction makes that clear. Our presence doesn’t bother it.

We wait motionless for what seems an eternity before the condor decides it is warm enough to take to the currents by more or less just stepping off its rock and spreading enormous wings which must be eight or nine feet long. It might not be pretty, but it’s a striking creature to be revered. 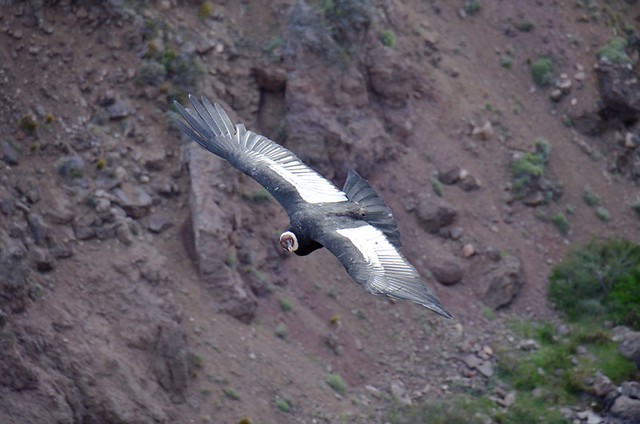 With barely a flap of its wings, the condor banks, swirls and rises, the movements exactly like those of the Hopi Native American condor dance.

It draws level with us, fixes us with a superior stare… and then it’s gone.

This is a dream, it must be. 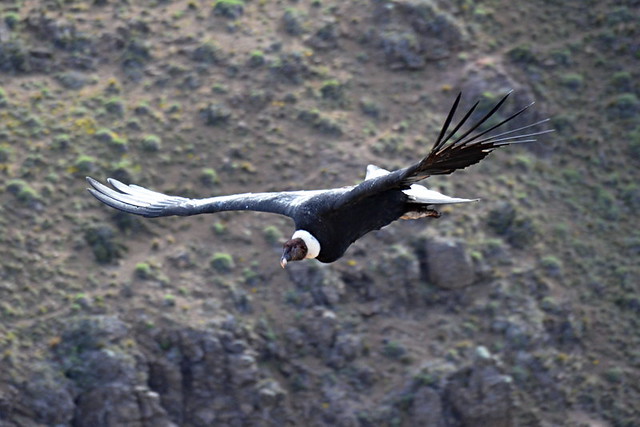 Different ways to travel the Carretera Austral in Chile

Reading The Dictator’s Highway by Justin Walker transported me right back to the pot-holed, dusty main road which runs for 1240km from Puerto Montt to Villa O’Higgins, connecting the north of Chile with the remote, […]