“An empty bag cannot stand up,” says Hetty, handing me two large, heavy and still hot Tupperware containers to pack into my rucksack.

We’re standing on the lip of the Cova crater looking down to the village of Paúl which lies in its floor. A cobbled path drops steeply from our feet and snakes its way down 1000 metres. It’s like looking out from an aircraft in flight and deciding to walk back down to earth. 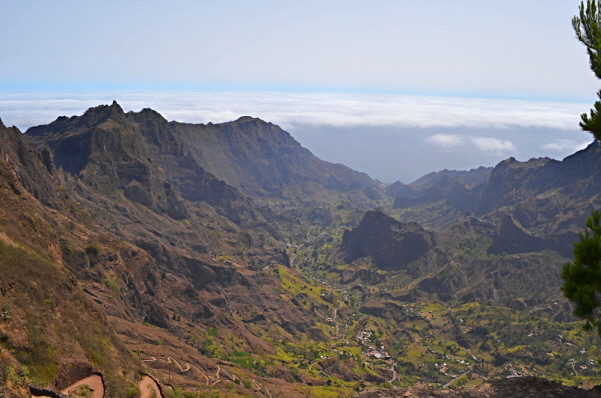 This is not going to be a quick descent.

Winding gradually down, my feet often at right angles to the path to ease the pressure on my knees and hopefully stop me from slipping into oblivion, Hetty tells us the names of the flowers whose perfumed and colourful faces peek out from the rocky crevices in the wall as we drop further and further towards earth. Finally arriving, flush faced, sweaty and achy kneed into Paúl, Hetty leads the way to a rambling series of buildings on the side of a sloping terrace. On the road outside, a Rastafarian sits smoking a pipe in the shade. 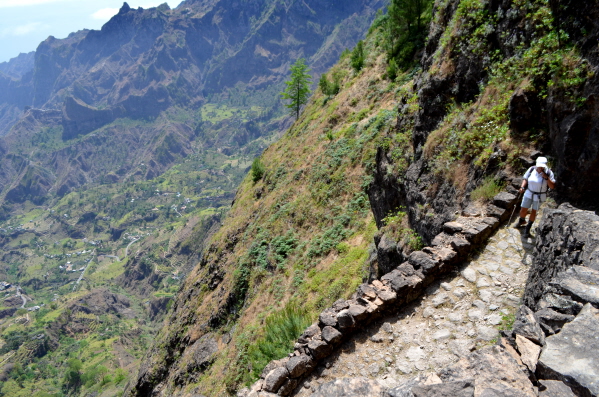 “Nice dreads,” I say.
Hetty translates my greeting and I’m rewarded with a wide, gappy smile, an involuntary stroke of a dreadlock and a nod of the head.

We climb the stairs to the kitchen door where the Rastafarian’s wife appears, all smiles, hugs and kisses for Hetty and a welcome smile and shy ‘bom Dia‘ for us. She leads us to her living room and tells us to make ourselves comfortable while she goes to make the coffee. Reserved for special guests, the living room has a sofa and two armchairs, a coffee table, and an air of neglect. The family spend all their time in the kitchen, on the roof, or in the road outside. 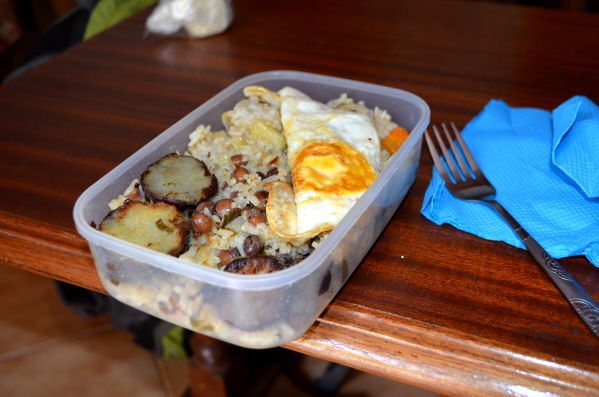 Suddenly realising I’m ravenously hungry, I remove the lid of my Tupperware container and release the scent of its amazing contents, a savoury rice and beans dish containing fried manioc, peas, carrots and sausages, topped by a fried egg. I express concern that I may not be able to eat this amount of food and that’s when Hetty throws the empty bag analogy at me. Whether I was spurred on by her words or because I was so hungry or just because the dish was unbelievably good, who knows. Suffice to say, not a single grain of rice was left.

Hetty’s friend brought us fresh coffee and little cakes to round off our feast and we kicked back for another ten minutes or so in the cool and comfort of the ‘best room’ before getting back onto the trail.

The following day Hetty once again handed me two heavy Tupperwares filled to the brim with still hot food. Our journey took us from the coastal settlement of Sinagoga, climbing hard up to Clovoada and deep into the interior, toiling up steep ravines, threading our way carefully down vertiginous slopes and traversing a rocky ridge path that joined tiny settlements like dusty dot to dots. All the way, through the heat and the energy sapping terrain, I was sustained by the thought of that rice and beans lunch that was currently adding to the weight and heat of my rucksack. 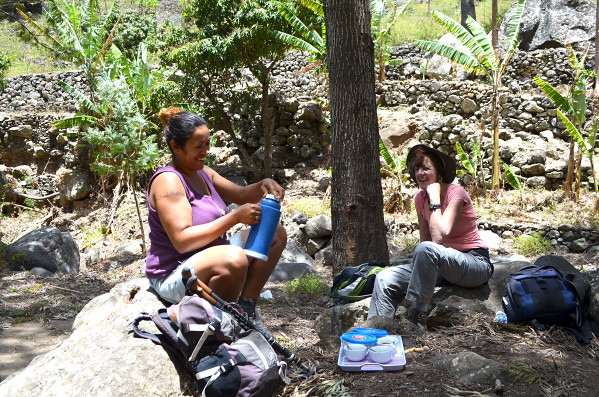 Arriving in a verdant valley opposite a remote hamlet, we settled on some rocks in a small wooded area that gave us respite from the sun. Like a child opening her Christmas present, I opened the lid of my Tupperware only to find today’s dish was different. Instead of rice and beans, it was a colourful pasta salad. Initial disappointment soon turned to gastronomic joy as the first few forkfuls confirmed that this was indeed the tastiest pasta salad known to man, or woman. Onions, chillies, sweetcorn, sweet tomatoes, sliced savoury sausage and lip tingling seasoning gave the dish a taste and texture that defied the word ‘salad’. It was so good, I’d eaten it before I thought to photograph it – d’oh!

I asked Hetty if her cousin would be willing to share her recipes but she just laughed and assured me there was no recipe, the dishes were simply made up of whatever was in the house that day and her cousin rose before dawn to prepare it for us. As once again, the sound of fork scraping the last remnants of food from plastic container emanated from my knee, two children, the offspring of another of Hetty’s friends, appeared out of nowhere with a flask of freshly brewed, aromatic coffee. 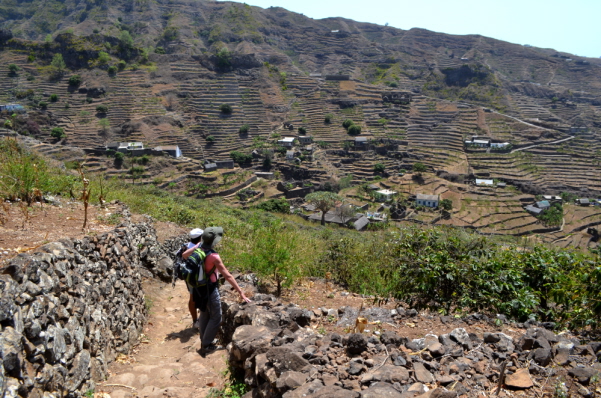 When Hetty’s in charge, there are no empty bags on the trails of Santo Antao.

All our transfers, accommodation, guided walks and travel while in Cape Verde were arranged for us by Archipelago Choice, tailor made holidays to the Azores and Cape Verde.

Can you feel the soul?

The link between these examples is both were about places which feel soulless to me; the travel equivalents of shop window mannequins, decked out in much the same gear as a human but with no beating heart […]