“Ah, the overture to Mozart’s Don Giovanni,” I thought, as the quintet in their crimson frock coats, white ruffs and gold embroidered waistcoats struck up beneath the ornate stucco ceiling of the Baroque banqueting hall of St Peter’s Benedictine monastery in the heart of Salzburg. I knew it was Don Giovanni because the programme told me it was, otherwise I wouldn’t have had a clue. 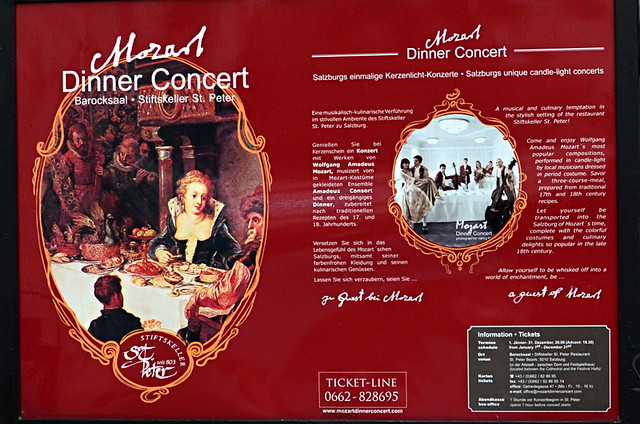 Uncultured plebeian that I am, I have never been to the opera, nor have I ever studied classical music, my classical CD collection consisting of a handful of embarrassing titles such as Classic Experience Volume III and Classic FM Breakfast Choice, no doubt the classical music equivalent of Top of The Pops volumes 1 through 56, or however many they churned out.

But that night, two minutes into the performance, I was already enthralled by the music and it was only the audience applause that alerted me to the fact that two more protagonists had entered the hall. Immaculately clad in period costume, the man and woman made their way to the front of the stage and began to sing. Their heavenly voices danced around the hall, riding the notes like kites in full, glorious flight, their facial expressions and body language giving life, drama and meaning to the otherwise incomprehensible words. Despite my complete ignorance of the language and the plot being played out in this little scene, I understood as clearly as if there had been subtitles running along the bottom of the stage.

When the aria was finished and the artists had left the stage, the waiters brought the  culinary overture to a dinner based on menus from the 18th century but with the benefit of contemporary preparation and presentation, not to mention fresh vegetables from Padre Prior’s garden. To begin, a white lemon soup with curd cheese and rosemary dumpling and a swirl of cream. As rich and decadent as the setting, the soup was an excellent opener. When empty bowls were cleared away, the musicians and singers returned for a duet from The Magic Flute, laced with comic audience participation that has us all engrossed in the unfolding of the story.

A main course of red wine-glazed breast of capon with pumpkin dumplings and semolina strudel followed before our final musical interlude from The Marriage of Figaro and tumultuous applause for the virtuoso performances. A dessert of parfait of forest honey with two sauces sent us on our way into the summer Salzburg night, enriched by the music and sated by the dinner. It was a heady combination of music and food, and for me, it summed up my experience of Salzburg, a city whose heart still lies in its Baroque splendour and impeccable musical heritage, beautifully embroidered into the finest fabric of 21st century living.

First chance I get, I’m off to redress the cultural gap in my life’s experiences with a night at the opera.

The Mozart Dinner is available every night at 8pm and costs €54 (drinks not included). I enjoyed my evening as a guest of Salzburg Tourist Office.

Serving Food on Wood in Restaurants, Trendy or Traditional?

There’s a social media campaign at the moment called we want plates, which is a light-hearted crusade against trendy restaurants that serve food on wood… […]

Salzburg could appear to be the European city equivalent of Dickens’ Estella in Great Expectations – exquisitely beautiful yet cold and untouchable. But it isn’t… […]