With sunburst yellow walls and cheery tangerine bed linen maybe the room had once looked like a warm, sunny day. Maybe once… twenty years ago. Now it looked tired, the yellow walls looking not so much sunshine as more suffering years of nicotine assault. It was depressing, a room way past its ‘sell by’ date. The bathroom was only big enough to have one of us in at a time. It was one of those that lacked any personality at all and had a shower curtain whose incessant, cold touch on my bare skin felt like unwelcome shower abuse. How do these flimsy shower curtains always find a breeze in enclosed rooms?

A couple of days earlier we’d been at what had been the first hotel we stayed at which had a bathroom with a glass wall, the Barcelo Santiago in Puerto Santiago, Tenerife. The contrast between the old school personality-less style hotel room and one which featured chic design elements was jarring, making the old fashioned hotel room seem even more out of time, especially when it came to comparing bathrooms. 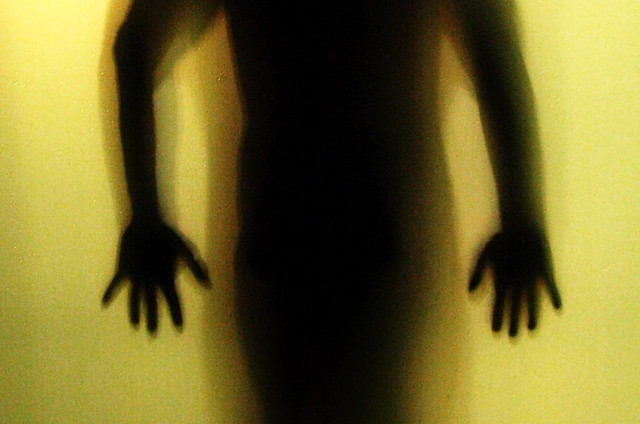 One was the sort of place in which you spend as little time as possible, barely functional. The other was a bathroom in which to linger, luxuriate and have fun. I’m sure it was meant to be sexy chic, but to me, the first time I saw the frosted glass bathroom wall, about a decade ago, it seemed too good an opportunity for indulging in some silly shadow puppet theatrics.

Since then we’ve stayed in numerous hotel rooms with glass wall bathrooms. Over the years the frosted glass becoming less frosted and more panoramic window – rooms with a view of a quite different kind than that which E.M Forster wrote about. 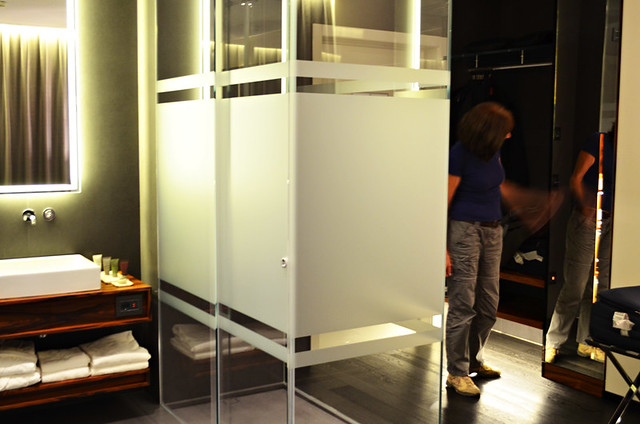 Some offer the ability for some privacy, with a modesty blind or lattice doors. With others it’s a case of ‘it’s show-time folks’. Our room at the Hotel Relais San Lorenzo in Bergamo, Italy, had a glass cubicle shower in the centre of the room. We liked it. It was imaginative, modern and sexy. But we’ve never had a problem with sharing a bathroom with each other. Plus, anyone who’s travelled a lot will have encountered bathrooms with limited privacy – we’ve washed in external latticed shower cubicles in Jamaica; an outside shower in a jungle campsite in Sri Lanka was basically a reed cubicle with a bucket. On the Isola dei Pescatori on Lake Maggiore, the bath in our room came with dreamy views of the tiny island, whilst at the Mate Alicia in Madrid the bathroom had floor to ceiling windows so you could watch the comings and goings in Plaza Santa Ana from behind a foamy mountain in the bath. 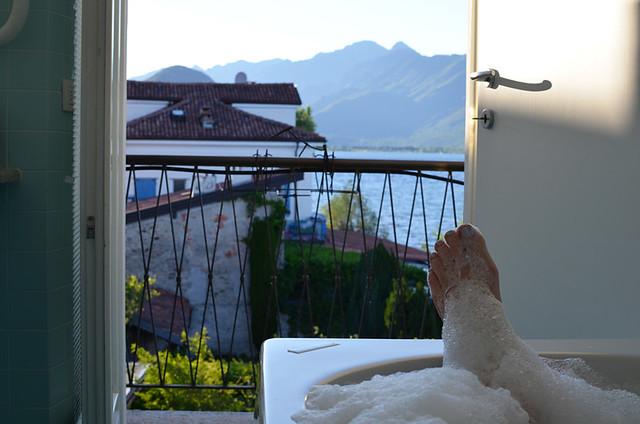 These exposed bathrooms split opinions. Like I said, we’re fans of rooms with individual personalities but not everyone feels comfortable about using transparent bathrooms.

One guest at the Relais in Bergamo commented “The bathroom is a glass cube integrated into the room – opaque, thank Jesus – but still inconducive to private ablutions.” 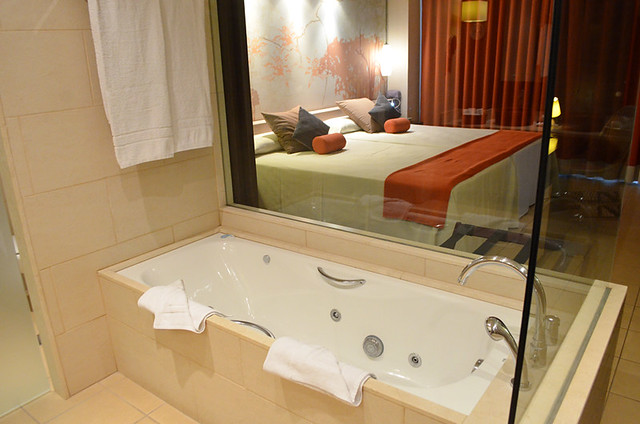 In a Guardian article about transparent bathrooms, writer Emine Samine admitted to extreme measures in order to maintain dignity – “I had to use the loos in the communal areas. Judging by the queues, I wasn’t the only one who had a problem with the in-room version.”

In a similar feature in the New York Times, an online travel editor said he gave this advice to his wife when confronted with a transparent bathroom- “Look, when you go to the bathroom, let me know, and I’ll look the other way. ” 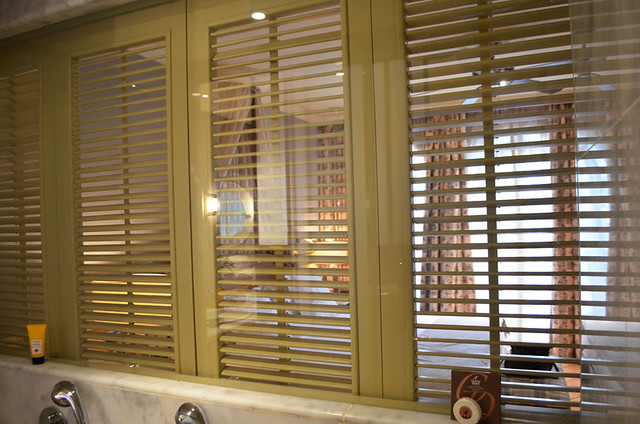 In a rant about exposed bathrooms, travel blogger Angelina Travels tells how she resorted to “… having to block the window entirely with various objects to ensure privacy.”

To be fair to Angelina Travels, her exposure concerns were as a result of sharing rooms with friends, male and female. The others were quoted were sharing with their partners. 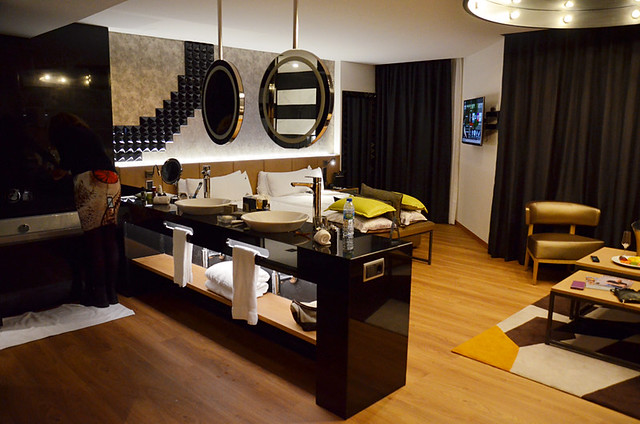 If you’re like us, you won’t be fazed in the slightest by walking into a hotel room which includes a ‘theatre’ of a bathroom.

But if you’re like the guest who found the whole glass bathroom experience traumatic – “there was nowhere in the room I could look where I couldn’t see my wife in the shower, it was awful.” – always check out photographs of hotel room bathrooms before booking.