Depending on who’s repeating this Portuguese saying, the Lisbon part varies – sometimes it’s Lisbon gets the money, at others it’s Lisbon shows off. The other three remain constant.

Despite stifling temperatures and the smell of a country burning was on the breeze, stepping off the train at Coimbra’s city centre train station was like a breath of fresh air. After time in Porto and Lisbon which, in September, were bursting with visitors, Coimbra seemed wonderfully crowd free. Like a town rather than a city. 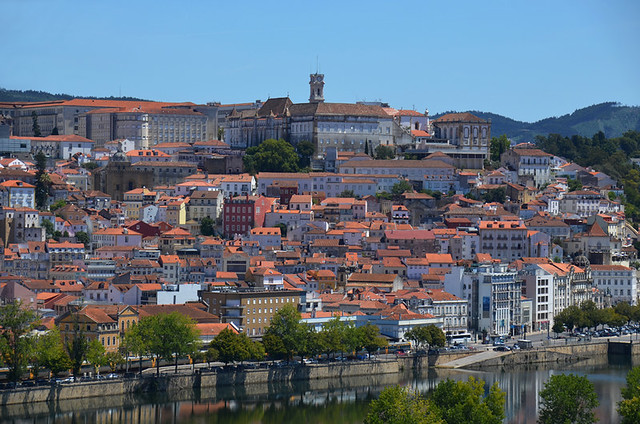 A bonus was that our accommodation, the Coimbra Vintage Lofts, was just over 100m from the station. No dragging reluctant cases over cobbled streets. The apartments were attractively retro as their name suggested, but had seen better days. The toilet stopped working almost immediately. However, a quick call to the parent Hotel Oslo and they were promptly fixed. 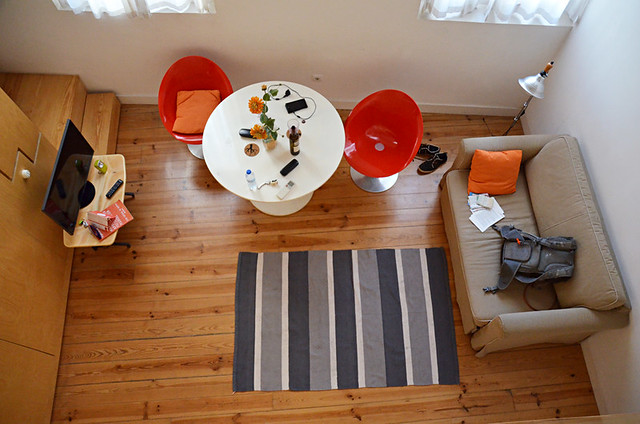 Day 1: the initial reccie
Suitably refreshed we popped out to explore the maze of narrow streets which made up the lower town. Once Portugal’s capital, Coimbra is famous for its theological and academic institutions. But its location meant it was also a commercial bridge between the Christian north of Europe and the Moorish south. Subsequently, the lower town beside the Mondego river has a working class vibe as opposed to the studious, superior air of the churches and university buildings of the UNESCO World Heritage part of the city perched on the hill. 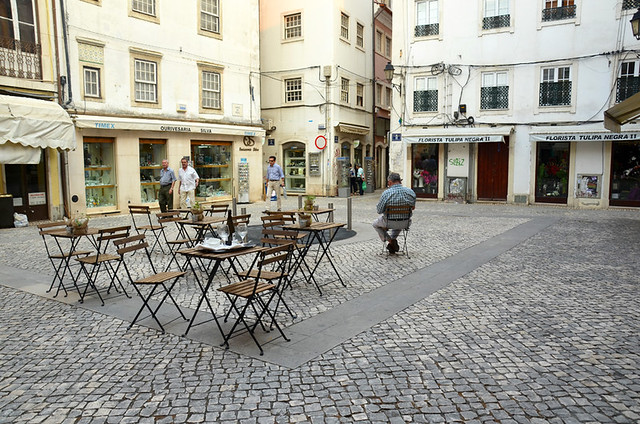 Stepping from our funky 1970s apartment we were immersed in a confusing network of alleys where tiny shops sold the sort of outdated wares I remember from my childhood; cake shop windows displayed mountains of mutant meringues (suspiros) and the bizarrely named barrigas de freiras (nun’s bellies), and a cat café, whilst the aroma of a local speciality, suckling pig (leitão), filled the air.

The city’s personality changed as we reached Rua Ferreira Borges, a wide cobbled street lined by smart town houses. Here, at the very foot of the learned hill were churches, proud statues, shops selling cork goods in various forms, pavement cafés brimming with locals and visitors, and a swanky ginja bar which had little in common with its sticky cousins in Lisbon. 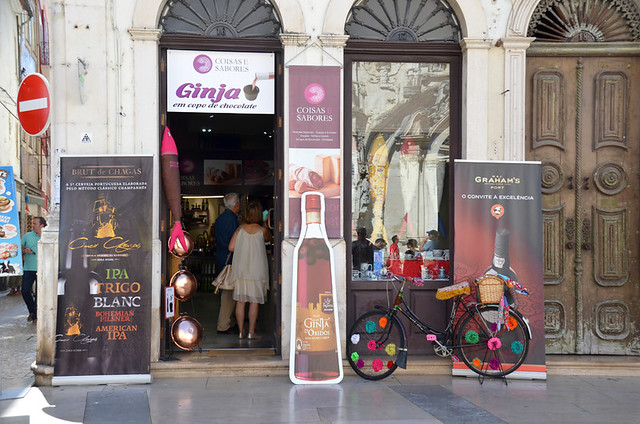 The elevated terrace of Café Santa Cruz, an early evening fado venue, beside the church of the same name proved a good spot to cool down with a cerveja and indulge in some serious people watching.

A Coimbra dinner lesson #1
Coimbra might not have felt as bulging with visitors as its hardworking or showy relations, but its most popular restaurants were impossible to get into without a reservation. After we bombed out on our first three choices, we settled on the first we could get into which had a menu which appealed. Aeminium (R. Escada dos Gatos 14), named after the city’s Roman moniker, was very friendly but the traditional food was only okay. 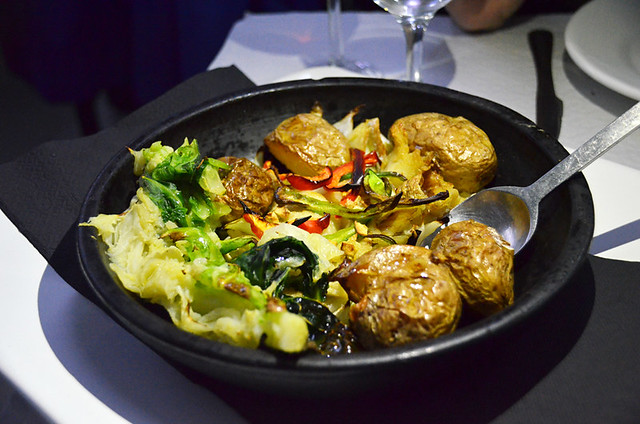 Day 2: a tour of the UNESCO World Heritage Site
Our first full day and we had a thoroughly researched plan of the places we wanted to see. First pause was at the Manga Cloister, an eye-catching Renaissance fountain and cupola whose name is said to come from King João III sketching its design on the sleeve of his doublet (manga). Shortly afterwards we detoured through the colourful Municipal Market, surprisingly free of other visitors, where women vendors in housecoats chatted over tubs of plump olives. 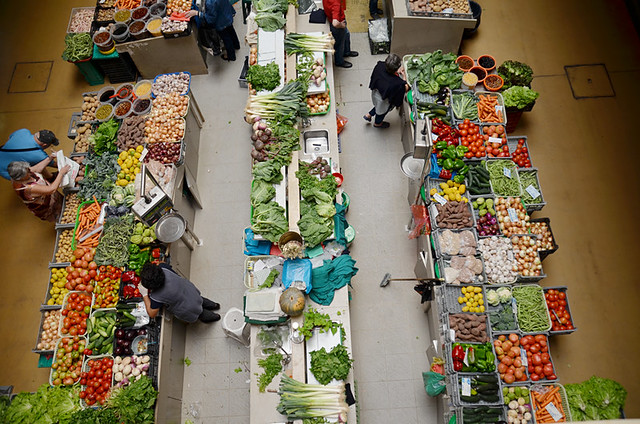 From the market, a glass lift followed by a trundling funicular (€1,60 for a one-way trip) was a bit of a cheat’s way of getting from the humble lower town to noble hilltop and the Coimbra University buildings.

A €12 stroller ticket gets you entrance to most, but not all, of the museums, galleries, libraries, churches etc. Arriving on the hill from the opposite side to most visitors, we didn’t have to queue to buy a ticket, whereas by the time we arrived at the ticket office outside the main square of Pátio das Escolas there were lines of people stretching around the block. 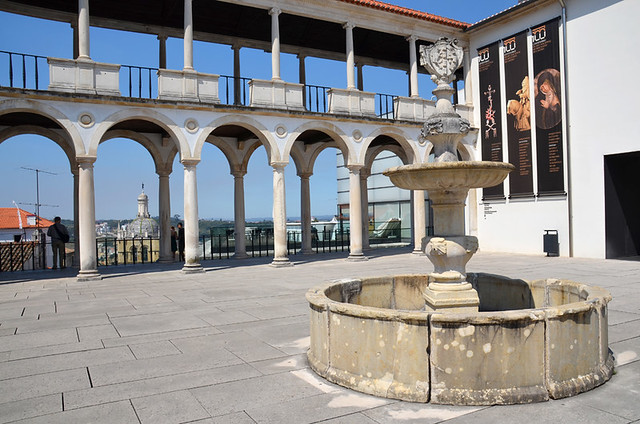 With ticket in hand we were able to wander at will. It would be easy to spend a couple of days exploring the old buildings and praças whilst pausing just to enjoy the loft views as well. Disturbingly close forest fires meant views were hazy during our visit, a thick plume of smoke drawing visiting eyes away from the more pleasing scenes of the river below.

Favourite buildings were the interactive Science Museum (fun and educational), the Zoological Museum (a Victorian throwback of a place with some deliciously morbid exhibits), and the Joanine Library where a colony of bats is said to keep the bookworms at bay. 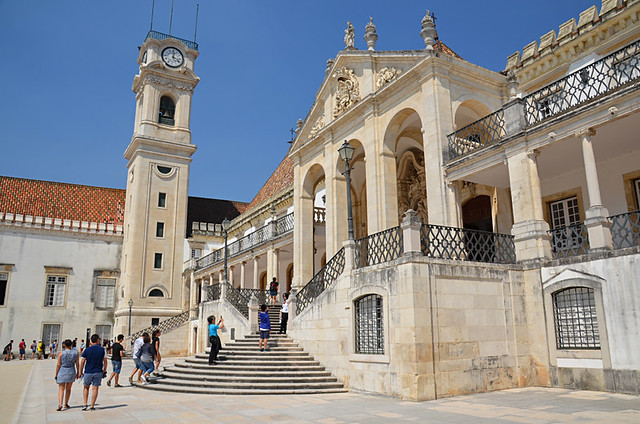 Although there’s a snack bar at Pátio das Escolas we made a detour to Praça República, a leafy square surrounded by student bars and cafés, relatively quiet in September, where we made the second culinary gaffe of our stay. Cheese and bacon in a bolo de caco roll with a mug of French fries sounded like a light lunch. Portuguese toasties are hefty affairs at the best of time; the ones at Café Académico meant dinner on our second night was a bust as well as hunger did a runner till the following morning. 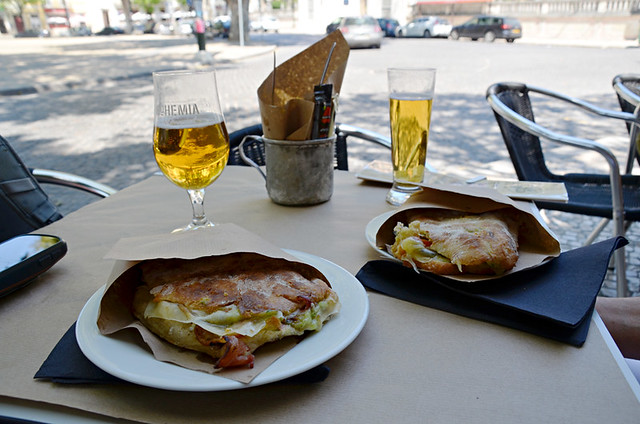 Even a climb back up to the University buildings before a descent along the charming Rua de Quebra Costas, with its past artisan shops, cool cafés and Tricana of Coimbra, a sculpture of a local water carrier, did nothing to shift that ‘too full’ feeling. 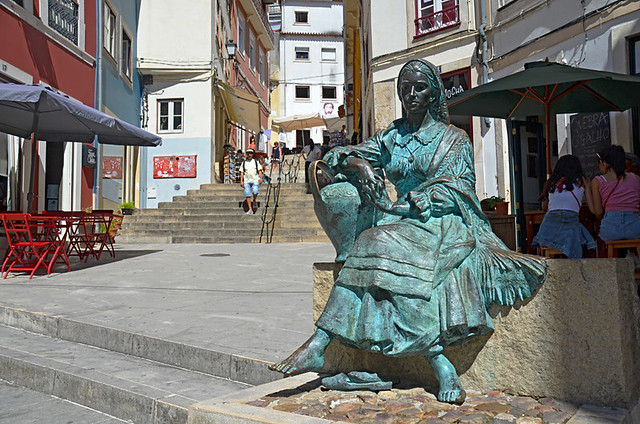 With hunger still in hiding, dinner was a bowl of dried nuts which accompanied a couple of glasses of smooth red wine at Bar Quebra back on Rua de Quebra Costas, watching a young couple at and adjacent table play chess and listening to smooth jazz from the bar mixing with soft fado emanating up from bars farther down the rua’s steps. 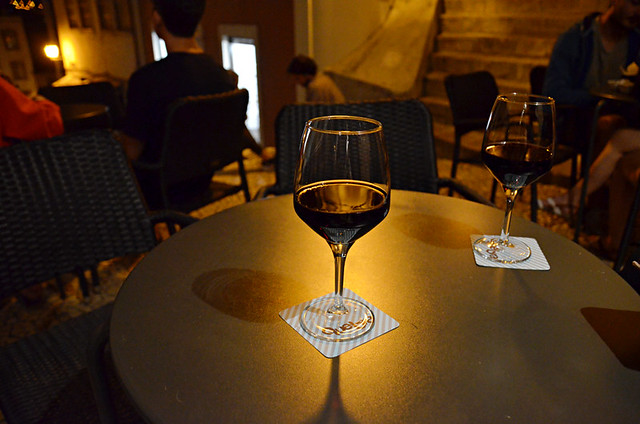 On the way back to our apartment we passed a small square where people sat on chairs outside a wine bar/shop watching an intense political film on a white screen attached to a shop window. The owner of the shop told us he let artists use rooms on the upper floor for free and sometimes they held impromptus exhibitions… or screened sombre political films.

Day 3: gardens and the south bank of the river
Located south of the University, the Botanical Gardens (open daily from 9am, free entrance) are a sprawling affair and part formal gardens, part park. In theory we should have been able to meander our way from hilltop to riverside but many paths were taped off, possibly due to fire concerns. We saw enough to convince us the gardens were worth more of an investigation but had to backtrack to reach the riverside, crossing the Mondego at the Santa Clara bridge. 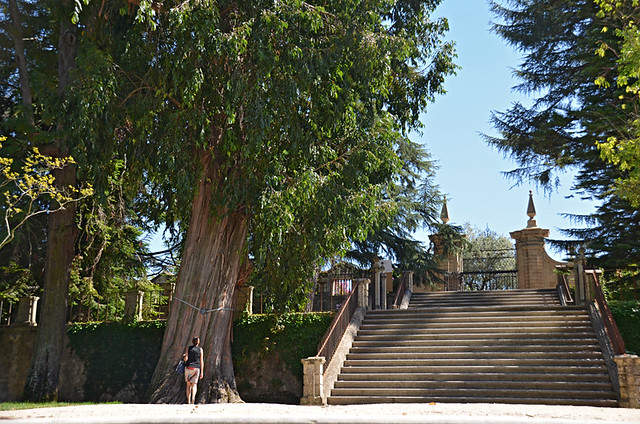 There are a few places of interest on Coimbra’s south bank; a Portugal in miniature theme park for the children; the Praxis Craft Beer Museum for the adults; and Exploratorio, an interactive science centre for both. You also get great views of Coimbra from the city’s modern shopping centre. 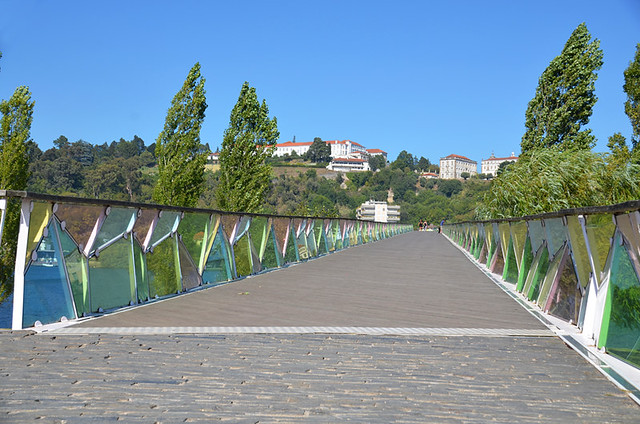 We returned to the more historic side of the river on the funky Ponte Pedro e Inés, a wobbly bridge named after two doomed lovers, which leads to Parque Verde do Mondego on the north bank. The area was developed in 2004 as a leisure spot for locals but devastating floods in 2016 led to the closing of the bars and restaurants which had set up business riverside. It’s a real shame as it’s a natural part of the city which is not without charm, even now. At one point there’s a sad, lonely, giant green teddy bear whilst a cooling, plane tree avenue leads back to the centre of the city. 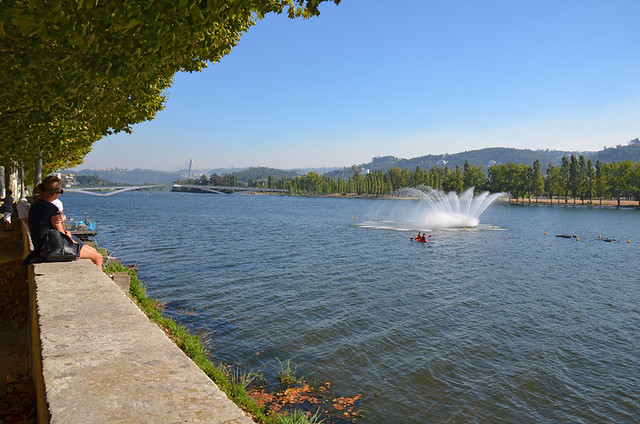 For our final night we made no mistakes. We reserved a table at cosy Sete tucked into a street beside the Igreja Santa Cruz and one of Coimbra’s best restaurants. My suckling pig pie with pineapple chutney was excellent; Andy insisted her salmon with cuttlefish-ink couscous was better, especially the couscous. 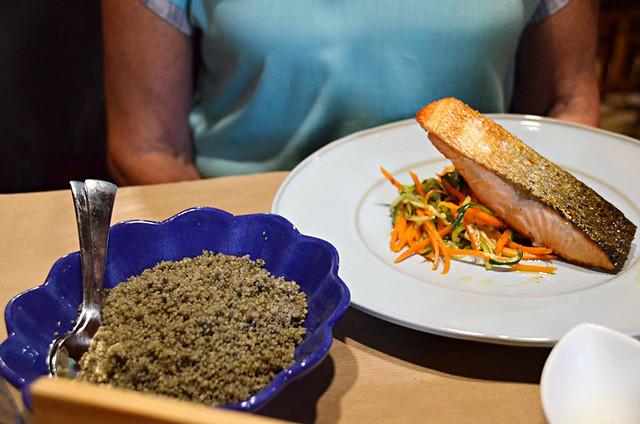 We finished our meal and stepped outside to find Praça 8 de Maio packed with people and a folk group performing outside of the church. We joined the masses, sitting on the square’s circular fountain to simply soak up the easy atmosphere as well as some unexpected local culture. 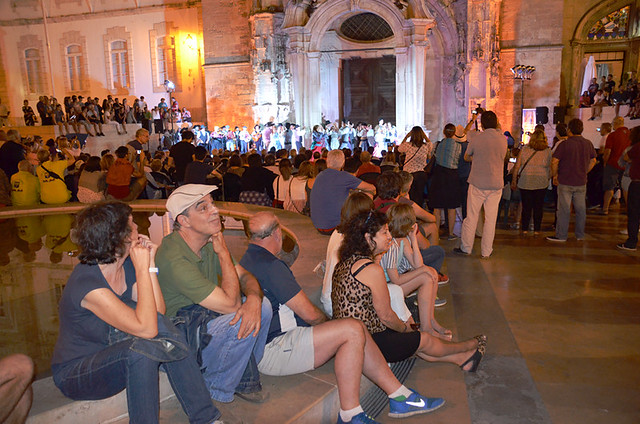 Coimbra might study, but it does so in a way which seems infectiously chilled out to me.

Santiago oozes cosmopolitan. Unmistakably South American but with a distinctly European side, it instantly feels familiar. […]