We were on board the ferry from Tenerife to Huelva, and the crossing was less than smooth…

The afternoon wore on, counted out in cups of coffee and changes of seat to vary the view. The only excitement came in the form of an inebriated woman being escorted back to her quarters by her even more inebriated, male partner. Sitting on the deck, knocking back G&Ts continuously since we left Santa Cruz several hours ago, the sea-legs swagger which the rest of us had adopted by-passed the drunken duo as they lurched from side to side, the woman’s right hand slapped hard across her gaping mouth while the left clutched her partner’s arm. We were relieved to see them disappear into the corridor without witnessing in detail the full extent of their drinking session. 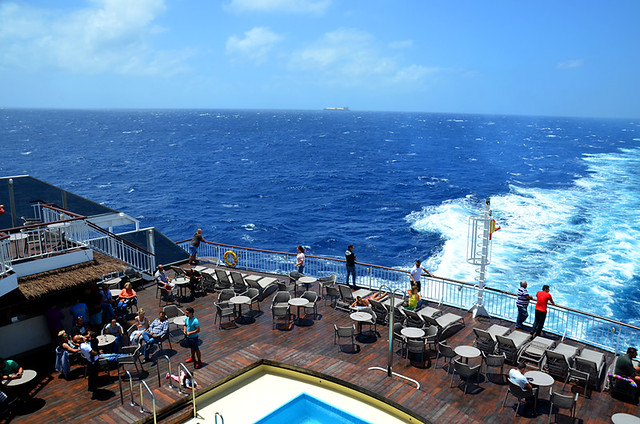 Early evening we braved the lurching floor of our cabin to take a shower, an acrobatic affair involving a very small shower cubicle and a one hand wash, the other being required to perpetually clutch the rail in order to remain upright. There was no time to loiter. In the enclosed confines of the cubicle, the motion of the boat began to assert itself. Drying and dressing in haste, we fled the cabin and returned to the relative stability of the dining room where another atrocious gastronomic offering was passing itself off as dinner. 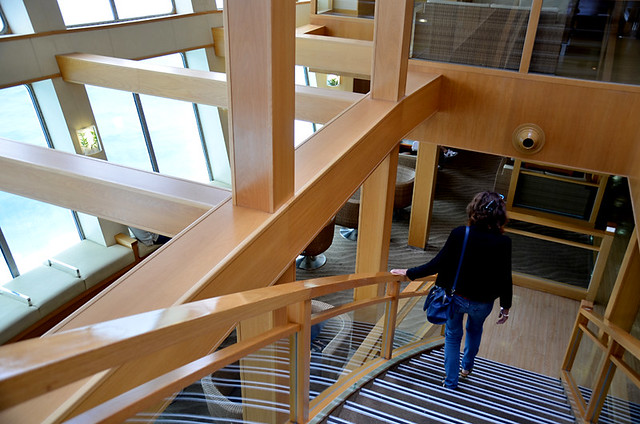 Appetites not so much sated as beaten into submission, there was nothing for it but to head to the bar where the dance troupe were doing sterling work keeping the meagre audience entertained. Presumably used to performing under such conditions, their floor show passed off relatively flawlessly save for the occasional mighty lurch of the boat which almost turned a dance lift into a multiple pile-up. When the bar closed and the lights dimmed, we could no longer postpone the inevitable, and headed to our cabin. 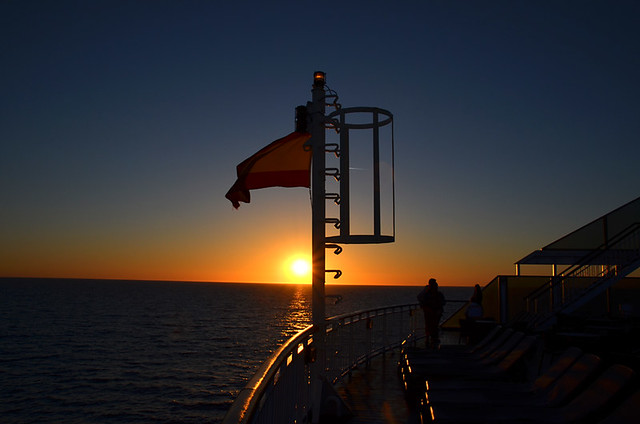 Lying in my bunk with the sea lashing the porthole, I could feel every wave as the bow rose, paused at the zenith of its height, and then crashed back to the angry sea with a loud boom that sounded like it had split the hull. All night the ocean raged. I managed to sleep for surprisingly long intervals, my dreams riddled with rising water levels climbing inexorably towards my face, jolting me awake each time it reached my nostrils. Despite the looming prospect of another whole day on rough seas, a lie-in was out of the question. Once we were awake, the need to vacate the cabin with all due haste was all that filled our brains.

We were scheduled to dock in Huelva at 8:45pm so when, at 8pm there was still no sign of land, we asked what time we expected to arrive. The response came like a shot from a sniper gun; we had been delayed by three hours due to the bad weather and would not now be docking until 11:50pm. I almost cried. Instead of heading to our hotel and a decent meal, we now faced another three hours at sea and worst of all, another meal on board.

It was near midnight when we finally berthed, and another hour before we were driving on dry land, sweet, heavenly, static, dry land. Just 20 minutes along the Costa de la Luz lay the Mazagonia, a stylish little boutique hotel where, despite the ungodly hour, a bottle of red wine, a hot shower and a big, soft bed that wasn’t moving, provided comfort and solace after two sickening days at sea.

We were finally on the mainland. Tomorrow, Portugal beckoned.