Every so often we like to hit the pause button, take stock and reflect on the travel experiences of the previous few months. It’s too easy to always be looking forward to the next project and an exciting new destination to explore. But places deserve to be absorbed properly; to be treated like a good friend you’ve taken the time to get to know rather than a line of fleeting acquaintances which barely merit a ‘hello, goodbye’ as you rush past.

Much of our travels involve being given the equivalent of a black and white sketch which we then colour in and add detail to by walking across a specific area for days and days, learning all about it as we go. Like any developing relationship there can be ups and downs and occasional tantrums, but ultimately the end result is usually the same – a stranger becomes a friend.

The process always, always results in a bulging rucksack full of memories and special moments. They’re not momentous in travel terms; they can often be small, personal moments and are all the more precious for it.

In a year packed with trails leading into forests, volcanic plains, gorges, valleys and along mountain paths these are five routes which stood out from the rest. 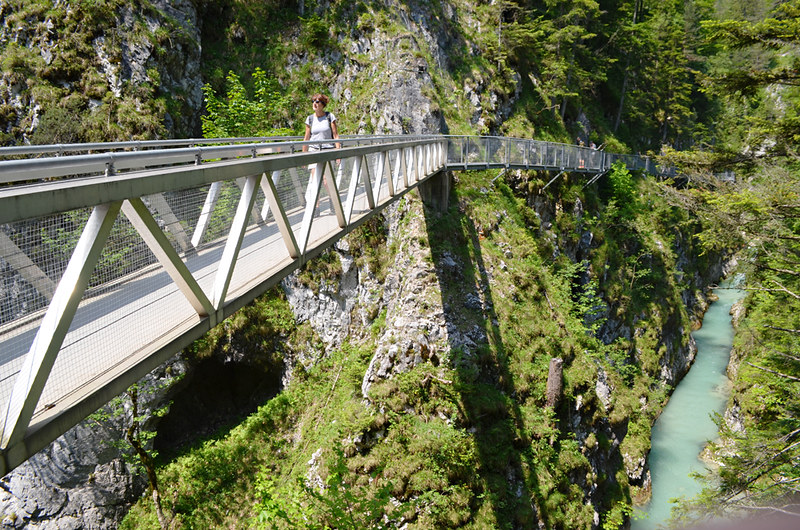 Gaisterklamm in Leutasch, Austria
The ghostly gorge at one end of the Leutasch Valley was a bit of a change for us as part of the route involved swinging into the saddle (bike not horse). I admit to feeling like a traitor as I rang my bell to warn hikers on the dappled forest riverside trail to shift out of the road so I could pass. I knew exactly what they were muttering under their breaths. But defecting to two wheels for part of the journey meant we were able to clock up a much greater route than if we’d been on foot. Plus, I actually quite enjoyed it. The place of legends and benign goblins didn’t disappoint. Metal walkways fixed to the walls of the gorge took us through the vertiginous heart of Gaisterklamm to a darker and more boisterous lower gorge. Exhilarating and great fun.
We stayed at the Hotel Kristal in Leutasch but Mittenwald is also within walking distance. 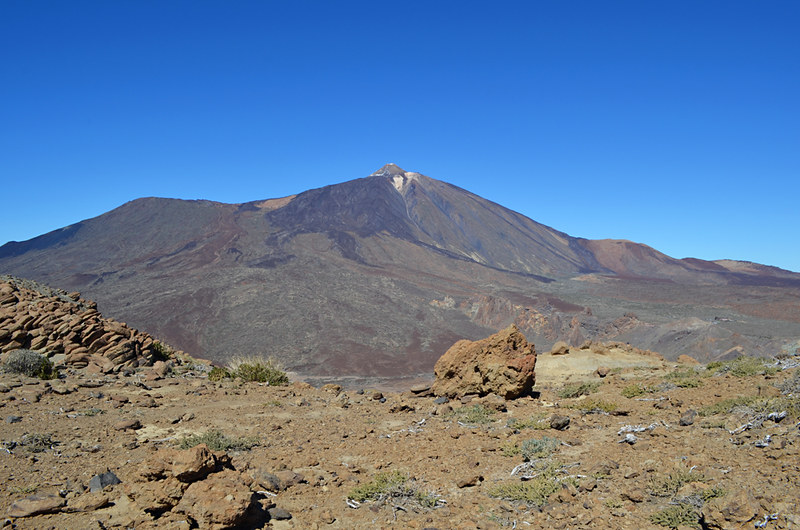 From Forest to Volcanic Crater on Tenerife
We’ve walked in the pine forests around the town of Vilaflor many times and we’ve explored the surreal trails of Teide National on numerous occasions. Putting together a new south Tenerife walking holiday for slow travel specialists Inntravel had as looking at combining both whilst coming up with a route which was quite different from one which has been tread by travellers for centuries. It turned out to be one of the most challenging routes we’ve walked in a while, and one with a pay off which truly deserved an amazed gasp… slipped in with the gasps caused by the altitude (around 2400m) and the effort of getting there. It’s a route where Mount Teide and the sprawling volcanic formations of Teide National Park remain hidden until the last moment, making the impact of the view all the more powerful.
We stayed at the Hotel Spa Villalba in Vilaflor and also the Parador de Cañadas del Teide. It’s not a marked or well known route so is quite exclusive to Inntravel’s To the Top of Tenerife holiday. 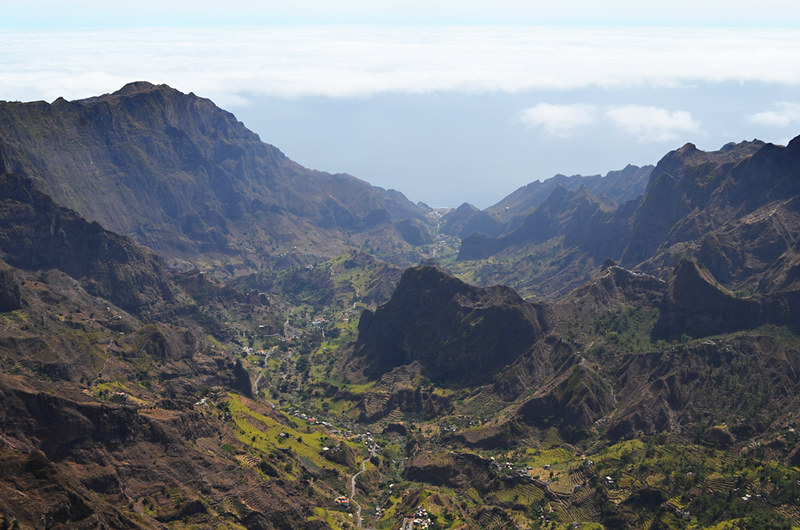 Lush and Lovely Ribeira do Paul, Santa Antao
Cape Verde was a revelation mainly because just about everything we’d heard about the African archipelago amounted to much the same thing – good beaches, not much else. Standing, overlooking one of the most glorious visions to please my eyes, the Ribeiro do Paul Valley, made us realise that Cape Verde was blighted by the same perceptions that colour views of some of the Canary Islands. Our route from the basin of a volcanic crater to our rural hotel deep in the valley took us through a tropical paradise where the beauty of scenery was matched by the smiles of the people we passed and paused to speak to along the way. It leapfrogged into one of my favourite walking routes anywhere.
We stayed at Casa das Ilhas and accommodation and guide (essential for the full Cape Verde experience) were arranged by Archipelago Choice. 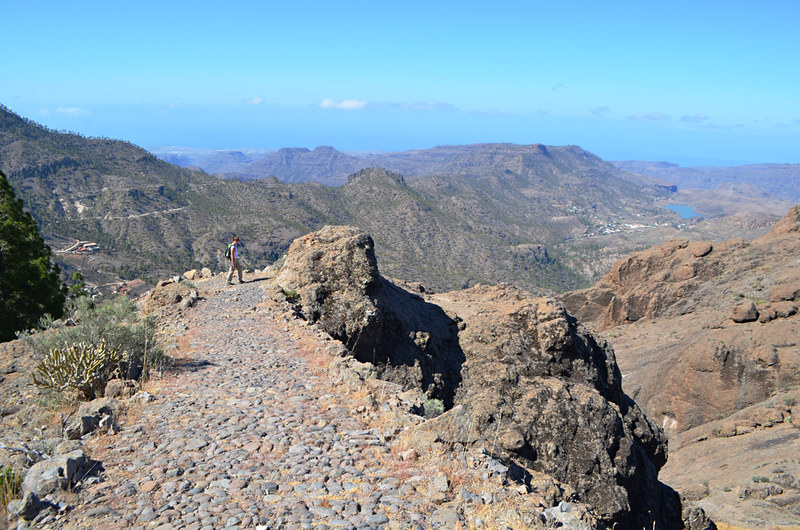 Tunte to Tejeda on Gran Canaria
Walking from Tunte to Tejeda on Gran Canaria was like meeting up with an old friend, but this time one who was in a better mood. Last time we walked the route it was mostly grey and quite miserable; any views were lost in the low cloud whose chilly fingers poked at our bones. It was a great walk then. In the warm sunshine we enjoyed this time it was a sensational walk, from the initial exhilarating climb out of Tunte with huge views over the south of the island to a trail which led through the pines and across the rooftop of the island, revealing the famous Roque Nublo, before it descended into the picturesque town of Tejeda where we were welcomed by a croaky frog chorus. Simply, a hugely satisfying route.
To complete this route we stayed at both the Hotel Las Tirajanas in Tunte and the Hotel Fonda de la Tea in Tejeda. 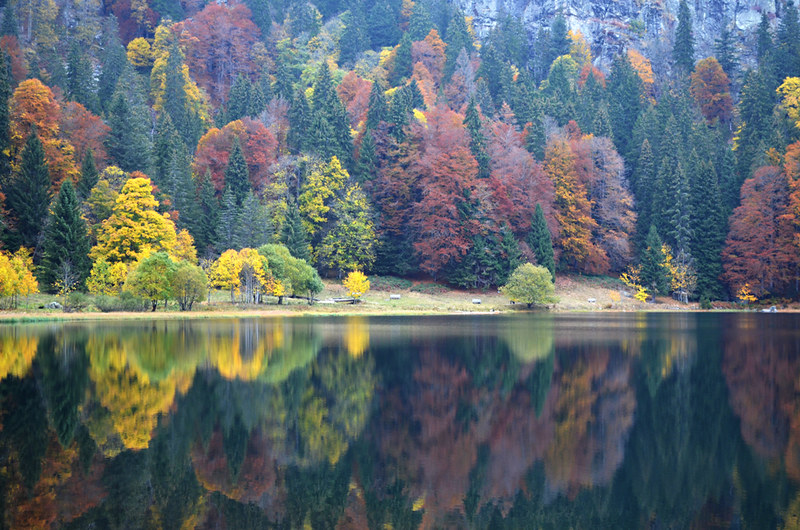 A Surprise in the Forest at Seebuck, Germany
The weather wasn’t kind to us for the first part of our epic trip walking through Germany’s Black Forest. It was cooler than we’d anticipated so the short train journey from Altglashütten to Barental was a brief but welcome chance to warm up before we ascended through the forest to Seebuck with its panoramic 360 degree views. In our case, 360 degrees views of a washed out landscape and dreary cloud. In summer, it must be quite something, but on an unseasonably cool late October afternoon it was a case of ‘right, seen it, let’s catch the cable car down and move on’. Within the hour we emerged at a sight which exploded into view, making a mockery of the low cloud and depressed lighting. Feldsee, hidden in and surrounded by the forest, was an unexpected delight – a section of the forest parading its autumnal colours with flamboyant flourish; doubling up the colour assault by reflecting the vibrant tree line in the glassy waters of the forest lake.
We stayed at the Hotel Peterle in Falkau, our base for a few nights whilst we researched the area for routes to be included in a new Black Forest walking holiday.

It’s part of what walking is all about for us. It’s not about route marches, how far we can walk in a day or  how quickly we can complete a route. It’s about the ingredients that make up the journey and what we discover along the way, like turning a bend on a mountain path, or emerging into a forest clearing, to be faced with something quite special.