It had to be done.

It’s not that pizza is exactly a speciality of Pisa, but it sounds as though it should be. Pizza in Pisa rolls of the tongue like the unravelling, stringy cheese which still connects the generous slice of quattro formaggi in my hand to the bit that’s in my mouth. 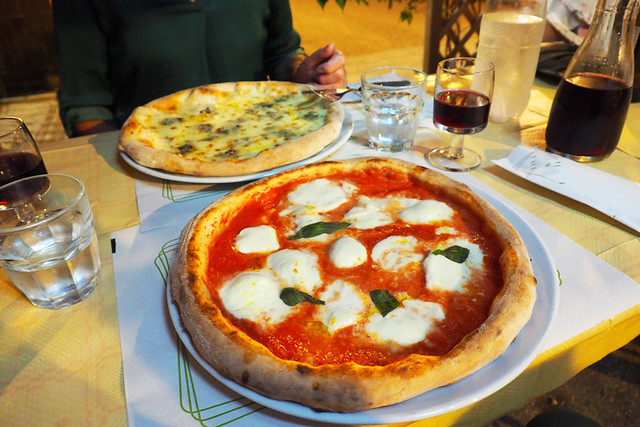 The setting is perfect, La Taverna di Pulcinella is an unassuming trattoria in a quiet back street just of the main drag. The plaster on the walls of the old houses is peeling off, the mode of transport in the narrow street is mostly Vespas, the night is sultry, the wine is smooth and frisky, and the diners around us eat voraciously. It’s a cliched and perfect Italian city scene. And we’re loving it as much as the Pisa pizzas we’re wolfing down.

Less than an hour and a half previously we’d touched down at Pisa International Airport. The journey from baggage reclaim to our hotel, the NH Pisa right in the city centre, had been as smooth and quick as any I can remember. This was thanks mainly to the People Mover, a modern shuttle which connects the airport with Pisa Central Train Station, which is right across the road from the NH Hotel. It’s €5 a ride and removes all the hassle of getting from airport to city centre. 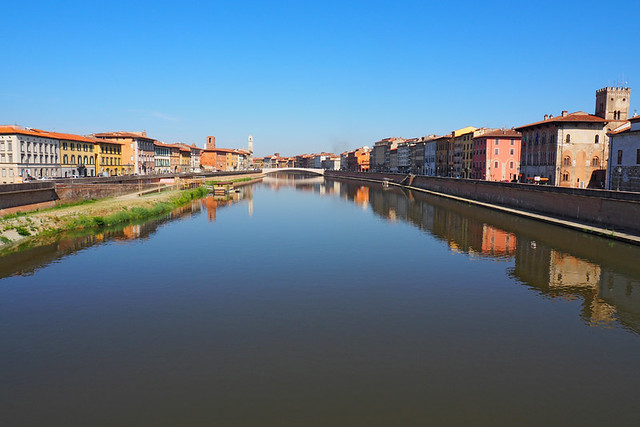 Pisa is a one night stopover, a chance to chill out for a few hours after an evening arrival before we continue onwards to Siena. With limited time, a morning, there’s only one thing we plan to see – the Leaning Tower of Pisa. We’re armed with a tip about how to view the famous tower without being engulfed by crowds – from atop the city’s old walls.

Actually finding the start of the old wall at its nearest point to us is a harder task than we anticipated. Google Maps show it to be the Torre di Legno on the opposite side of the River Arno. But when we arrive where it should be there’s no sign pointing to any access to ancient walls. In fact there’s only a gated car park beside what looks like a low office block. We retrace our steps and check surrounding streets… without success. Using the Sherlock Holmes approach – once you eliminate the impossible, whatever remains, no matter how improbable, must be the truth – we return to the ‘office’ car park and cautiously enter. Sure enough, there’s a small tower inside with steps clinging to its flank. We climb them to encounter a girl sitting on a chair – the (very, very lonely) ticket seller. It’s €3 to walk the 3km which will take us right to the Leaning Tower of Pisa. Nobody else seems to know this as there is not one other person on the old wall. After a kilometre or so we realise why. The walls wind not above gorgeous Medieval streets as we expected but through a more modern urban landscape; one of residential homes and unattractive factories. It’s a long, uninspiring slog. We suspect it’s one of those ‘we discovered it so it’s brilliant, even though it really isn’t’ type of tips. 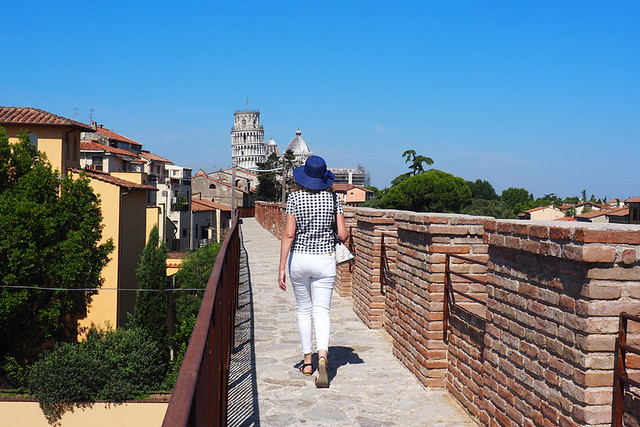 And then the Tower comes into view, joined by the cupulas of the Il Duomo (the Cathedral) and the Baptistry, both of which keep Pisa’s famous tower company on the Campo dei Miracoli. Despite having seen who knows how many photos of the Leaning Tower of Pisa over the years I had no idea there were actually a trio of architectural beauties, all with distinctively Tuscan grey and white stonework and facades decorated with elaborate arches and elegant columns. Finally the tip comes into its own. The closer we get, the bigger the three buildings loom larger, and still we share the walls with nobody else. 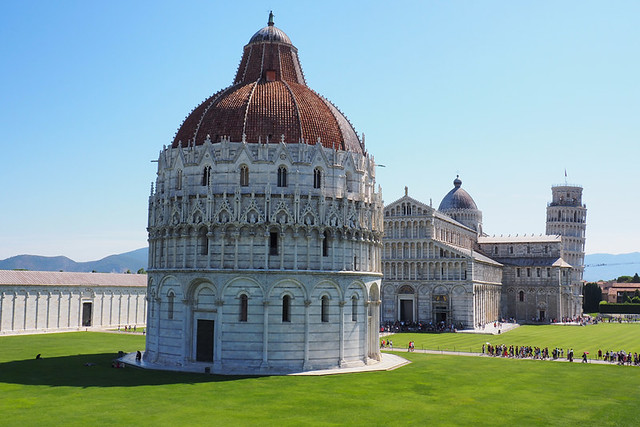 As the wall curves around the Campo dei Miracoli, and we pass another tower entrance, the views open up more and more, revealing hordes of sightseers milling around the old buildings. From our position there’s no need to manoeuvre through armies of people pretending to hold up the tower in order to get a decent photo, just sidestep the occasional pigeon.

We are, literally, above all that.