Nothing is right – the passengers, the boat, the atmosphere…me.

It’s barely 9 am and despite a lingering chill of night in the air, the sun is already hot on my skin, causing minuscule beads of sweat to gather in my eyebrows. On the quayside, a group of woman selling straw hats is mingling with the waiting passengers. One of them quickly approaches me and offers me a hat. I decline and turn away. 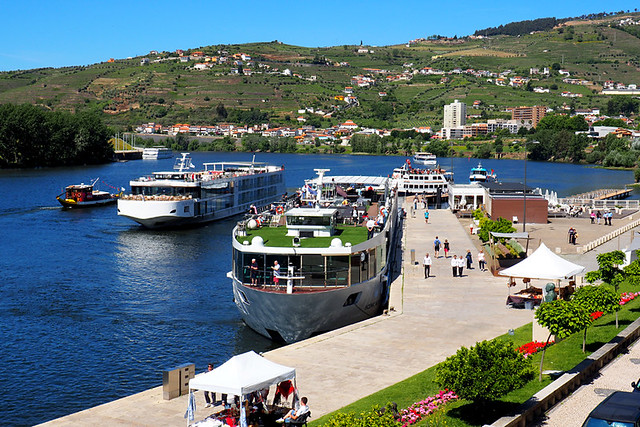 Amongst the people milling around us, a group of around 30 are wearing matching blue baseball caps with the words Douro Azul embroidered on them, perched incongruously on grey heads. One of the baseball cap wearers is holding a wooden pole at the top of which is a platform on which three carved figures stand, two naked men flanking a naked woman, their arms and the two penises raising up and down in response to a loud clacking mechanism in the handle operated by the carrier. As he strolls through the crowd towards us, his face a beaming beacon of delight in his role of group comedian, I stare, rudely, making no attempt to contain my annoyance at his puerile, tasteless trophy.

I sigh, exasperated at the delay. We were supposed to be on the quayside at 8:45 am, ready for a prompt departure at 9 am. At 8:45 am we were still standing outside our hotel, a twenty minute drive away, waiting for a taxi we had ordered the day before. By the time he arrived, my face told the driver he was in trouble and he set off at speed, hurling the car around the hairpin bends that swept down through vineyards to the river, arriving alongside the quay just as the railway station clock struck nine. Now it’s ten past nine, the boat is anchored alongside the quay and the crew are only now putting the gangplank in place. All that stress for nothing.

Another woman approaches me, holding out a straw hat.
“Nao.”
She tries a different hat.
“Nao!” I give a speak-to-the-hand gesture and turn away, aware that my voice has been too loud, too aggressive, incongruous amongst the excitement and anticipation of the waiting passengers.
I’m beginning to wonder if we’ve made a big mistake booking this cruise. 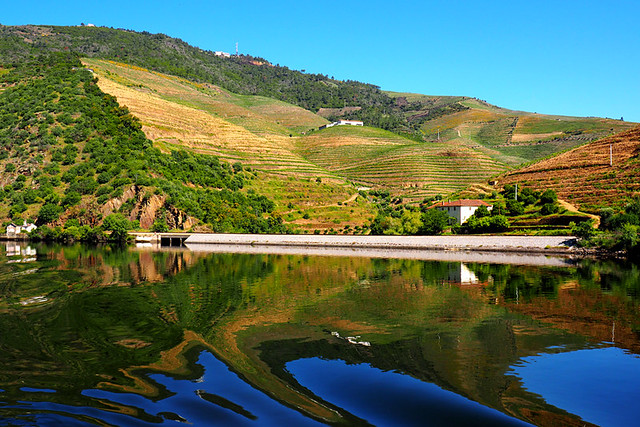 Several weeks earlier we had spent two days walking in the Douro Valley, in rain of Biblical proportions. Most of the time we could barely see the path in front of us but once or twice, just for a few precious moments, the sun had emerged and we had seen the beauty around us. It was enough to tempt us to return and to take a cruise up-river where we had heard, the best landscapes lay. 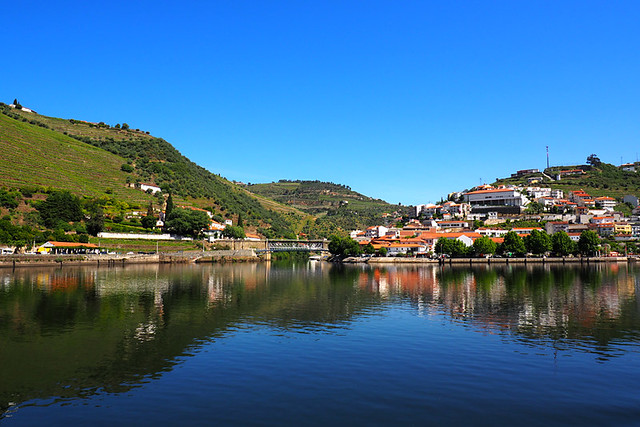 Boarding finally begins and as we reach the gangplank, we’re told our table is number 105 on the first deck. Expecting to have to share a table and desperately hoping that the old guy with the tacky adult toy isn’t sharing with us, I make my way down the cabin to table 105 and am delighted to find it’s set just for the two of us. Things are looking up.

The cruise includes breakfast, and each place setting has a plate with a bread roll and a piece of cake. A jug of orange juice sits on each table, along with a saucer containing packets of butter and strawberry jam. As the waiting staff begin pouring coffee, we tuck into our roll and cake and I begin to relax and take in my fellow cruise passengers. The vast majority appear to be Portuguese, with a smattering of French and German. As far as I can hear, there are no other native English speakers amongst the mêlée of voices. On the whole, people are dressed as they might be for a Sunday picnic after Mass, many of the women sporting one of the straw hats I had so curtly refused.

Once breakfast is done, people begin to wander out on deck and we join them, heading to the top deck and taking a couple of seats in the sun. It’s at this point that I remember we haven’t applied any sunscreen, in fact, we didn’t even bring any with us. Our mini-break weather up until today has been so bad that I haven’t even thought about sunscreen – until now. I rummage in my rucksack and find a stick of sun block which we both apply to our faces. The woman sitting next to Jack offers us her sunscreen to use but before I can say ‘obrigada’, Jack politely refuses it.
“You had better get your hat on then,” I caution through pursed lips.
“I haven’t brought it.”
We’re on deck, at the very start of a 12 hour river cruise, the sun is blazing in a cloudless sky and we have no sunscreen and one hat between us. 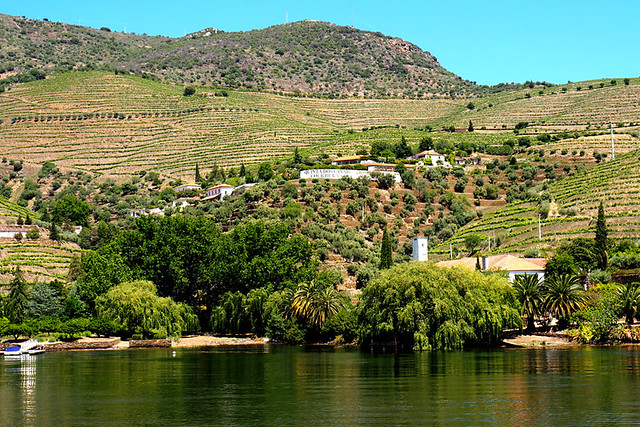 But we’re gliding gracefully along the Douro, the bridges and houses of Regua giving way to layer upon layer of slopes braided in vines as the river narrows and the banks draw closer, embracing us in their unbridled beauty. It isn’t long before we reach our first lock and the gate opens for us to slide into the chamber, a cascade of water falling from it, creating a curtain of rain which passes along the deck like a rumour, eliciting squeals and whoops from the passengers as the cold droplets spatter indiscriminately down backs. 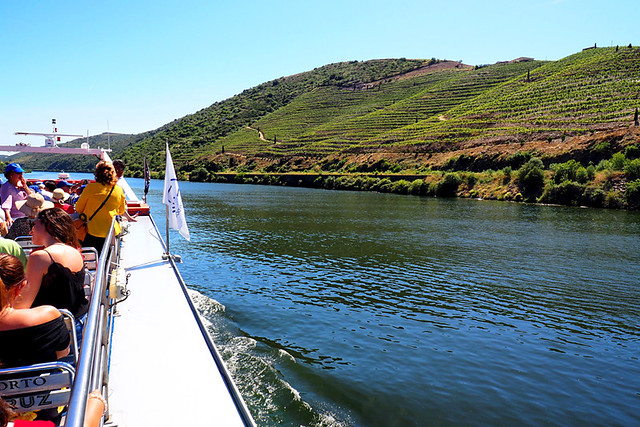 Suddenly I get it, the sense of camaraderie with fellow passengers; the joy of a journey up-river to places as yet unseen; a shared adventure and a forced relaxation. There’s nowhere to go, nothing to do, except enjoy the experience and the extraordinary landscape that’s being unwrapped, like a game of ‘pass the parcel’ except the music doesn’t stop and we all win the prize.

After a while we decide to give our seats to a couple of the elderly women who have been left standing as there are more passengers than there are seats on the upper deck. We head to the shade of the lower deck and watch from the stern as the river carries us gently through its valley. As midday approaches we can hear the clatter of crockery and cutlery below deck and watch the waiting staff setting tables for lunch. Once again we head to our table where a bottle of red wine and a large bottle of water await, not to mention the aperitif of either a port or a porto tonico (white port with tonic) which we happily guzzle. I’m amazed that we get a whole bottle of wine to ourselves, there’s only one bottle on each table, most of which have eight people at them but as lunch progresses, hands are raised and more bottles are brought to replenish supplies. 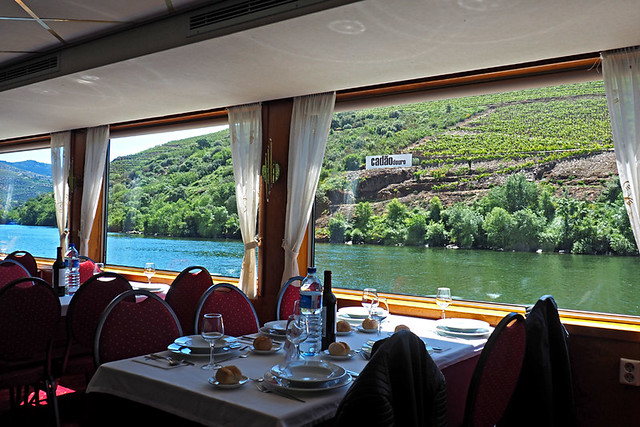 By the time dessert arrives, the volume of merriment below decks has risen exponentially. Its fair to say fun is being had. Coffee replaces wine glasses, and the strains of an organ rise from below deck. An intrepid exploration to the lower deck uncovers a keyboard player and a packed dance floor. It’s a level of fun too far for us. We head to the deck where the sun is now beating mercilessly, there’s an intermittent hint at a breeze, and the scenery has morphed from dramatic to sublime. A medley of pop music is drifting across the heads of the passengers, lulling everyone into a post-lunch euphoria as we cruise. 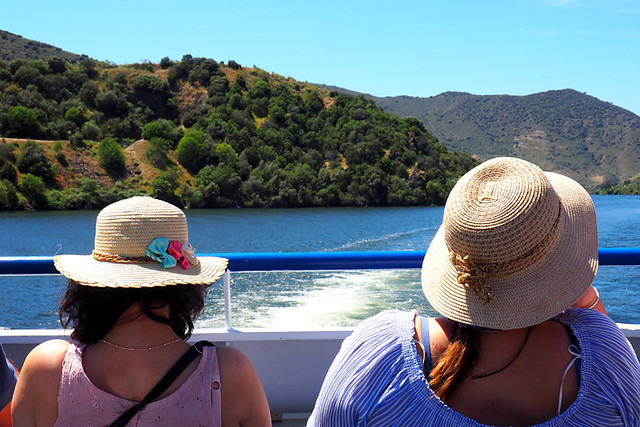 In front of us, three women are dressed in summer dresses and each is wearing one of the straw hats bought from the vendors at the quayside. As I look at them I realise that they’re actually quite pretty hats. Jack is wearing my hiking hat and my head is hot. As much as I want to stay here all afternoon, I realise it won’t be long before I’ll have to head inside to the shade. I want to go back in time to this morning and replay it. In my new version we arrive happy and stress-free at the quayside where I buy one of the pretty straw hats from a vendor and laugh at the old guy in the baseball cap with his crude toy. 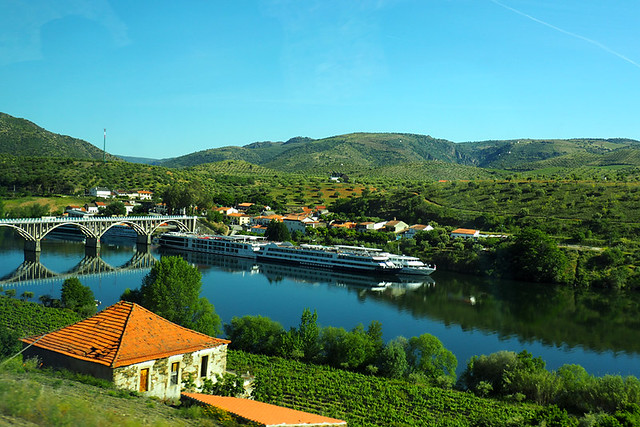 The afternoon passes gently by and we finally dock at Barca D’Alva and disembark, all smiles and sun-kissed faces. Transferring to a coach, we thread our way above the valley, looking down on the river we’ve sailed as we wind up and over the hills to Pocinho and the panoramic, riverside train ride back to Regua. It has been the most perfect, well almost, day.

Douro Cruising
We took our Regua – Barco D’Alva – Regua cruise with Tomaz Do Douro, one of several companies offering a range of cruises on the Douro. Our cruise cost €106 per person and included breakfast and lunch (incl. wine & water) on board, bus from Barca D’Alva to Pocinho and train from Pocinho to Regua, arriving back at 8:30pm.