The four spaniels stared at us with eyes that would melt ice cream in the Antarctic. I’m sure one of them tilted its head slightly to draw my attention to a sign beside my seat.

The sign told me we’d parked our bums in an area reserved for dogs. Not the seats as such, they were for the owners. But the extra spacing between the seats was wide enough for a wee dog or four to get comfy. We immediately relinquished our seats to the spaniels and their owners and found others in the ‘humans only’ section of the ferry where our nostrils were teased by the aroma of battered fish, chips and the thick, brown vinegary sauce that you only seem to get in Scotland.

A ferry with a special seating area for dogs. It was a nice touch. Very Sunday night TV quaint Scottish island fare. 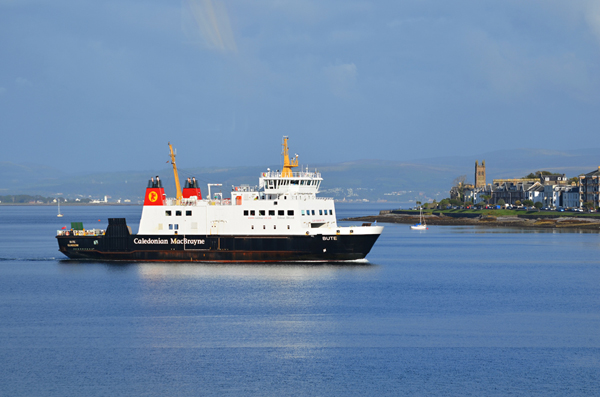 I couldn’t wait to get away from Bute when I was young. It was too small, too restricting. The first time I departed its Clyde-lapped shores was when I was 17. That adventure didn’t last long. The second departure was at the ripe old age of 23. My manager in the local dole office warned me about the serious risk of extreme loneliness followed by likely subsequent suicide amongst country hicks like me who absconded to the big city. The big city in this case was Stockport whilst my workplace was Denton; a Tameside town which made Bute seem not quite as hicksville as I’d thought. 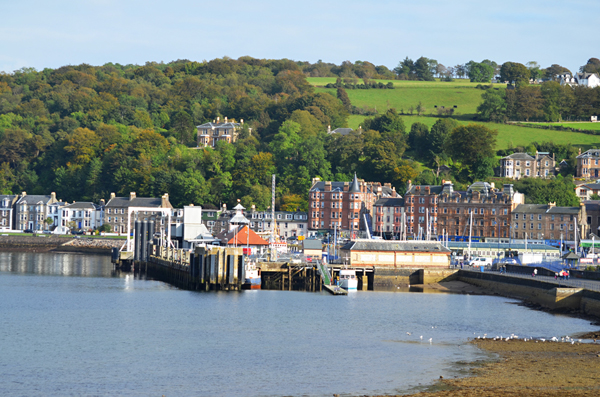 Over the years I woke up to how privileged I’d been to grow up in such a special location as a tiny island with shortbread tin looks which straddled the Lowlands and the Highlands. Now I look on Bute with a mix of pride and sadness. The sadness is because of what the island could be. The things that irritated me about the island thirty years ago still plague it – parochial politicians, limited support for new ventures or anything different, the curse of not letting go of a touristic past which will never return… not in the same format at least. Bute’s an island which struggles to see its own potential. Although there are signs some might be waking up.

And yet, despite decades of living in Greater Manchester and the Canary Islands, there is still a sense of coming home every time the Caledonian MacBrayne ferry docks at Rothesay pier. 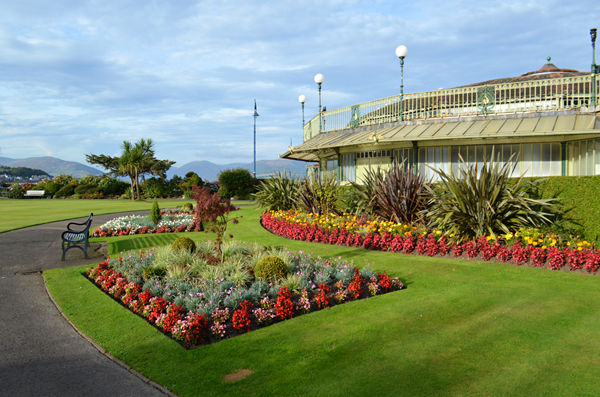 Mostly that’s because my mum, sister, one nephew and an aunt still live there. But it’s also because roots go deep. Your formative years mould who you are and how you think. I might consider myself a citizen of the world, but I’m a citizen with distinctly Scottish traits.
And this was a visit where Scottishness was high on the agenda – the wedding of my nephew Scott and his German fiance Anne; a delight of a niece-in-law. It was a full blown kilts and pipes affair in Rothesay Castle.

A motley crew descended on the island for the nuptials, these including Germans, Mancs, Scousers and a handful of posh Edinburghians (all Edinburghians are posh to us West of Scotland folk). 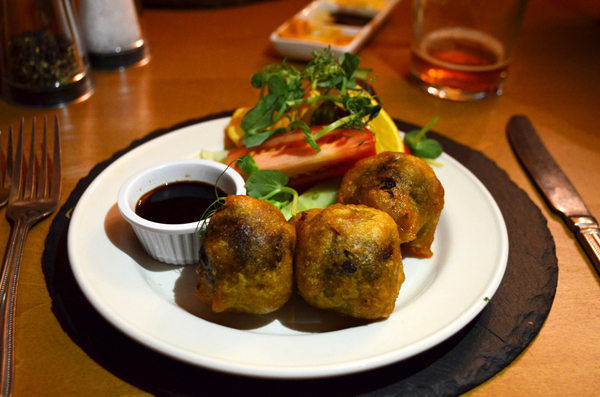 On the night before the wedding, the soon-to-be German side of our family were introduced to the more sophisticated face of Scottish cuisine at Kingarth Hotel on the south east of the island. Kingarth is a Bute institution which fits exactly the image of what modern tourists would hope to find on a Scottish island. I say the more sophisticated face of Scottish gastronomy, but there are still West Scotland crowdpleasers on the menu such as haddock and chips. Additionally, their delectable haggis bon bons are of the battered and deep fried variety. If you ever find yourselves at the Kingarth Hotel you’ve really got to try the haggis bon bons. 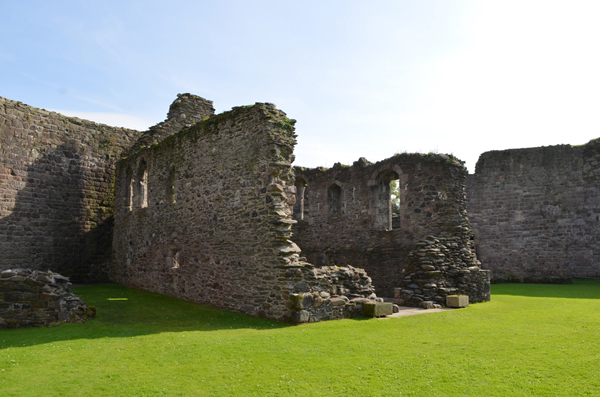 Despite it being late September the weather gods had also donned kilts for the big day and the sun shone warmly on Rothesay Castle. It was the first time I’d been inside the castle in years; a sensational venue for a wedding. Not only is it unique, dating back to 1204 when it was built to fend off rampaging Norwegians, it’s about as regally Scottish as you can get, having a long-standing connection with the Stewarts (Prince Charles is the Duke of Rothesay).

It’s a partial ruin that felt as though it had been brought back to life when filled with an army of men in Highland dress and bonnie lassies in gowns. The climb to the great hall where the wedding ceremony took place was either by an exposed, narrow and crumbling set of steps or via an even narrower spiral stone staircase – both places to have you watching your step rather than striding up and down nobly. Post ceremony photos took place in the castle’s circular interior courtyard – a setting which would make anyone feel like a king and queen.
Just in case the regal setting turned anyone’s head, proceedings were kept down to earth courtesy of a synchronised flashing of saltire underpants by the male members of the groom’s family; the less said about that the better. But it was fun and went down (or should that be up) well. 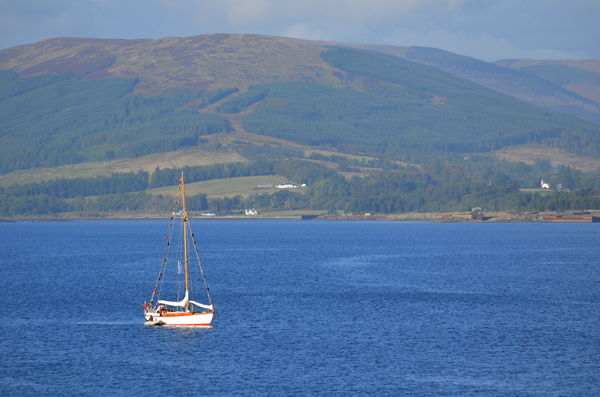 Whilst bride and groom travelled by limo to the reception (also at Kingarth Hotel), crossing the castle’s moat to their waiting carriage as the air was filled by the lament of bagpipes and soapy bubbles (confetti not allowed), the rest of the wedding party made the journey on a less glitzy mode of transport; a double decker bus. It was a specially chartered one, but a double decker bus nonetheless. Did you know double deckers are ideal for upstairs versus downstairs singing competitions?

People in the travel industry say there’s a current trend for people craving local experiences when they travel. I wouldn’t disagree with that, but in our experience quite a few folk are craving a palatable form of authentic local experiences rather than the rough and ready real thing. Certainly from their faces, the handful of visitors who had their authentic Scottish lunch disturbed by a clan of good natured but noisy locals in kilts and retro evening gowns didn’t seem to find the experience an enriching one.
They were visibly relieved when we left them to their pheasant pates to take over a separate wedding room with a wooden terrace overlooking green fields bordered by Scots pines, a crescent bay and even smaller Scottish islands across the petrol waters. 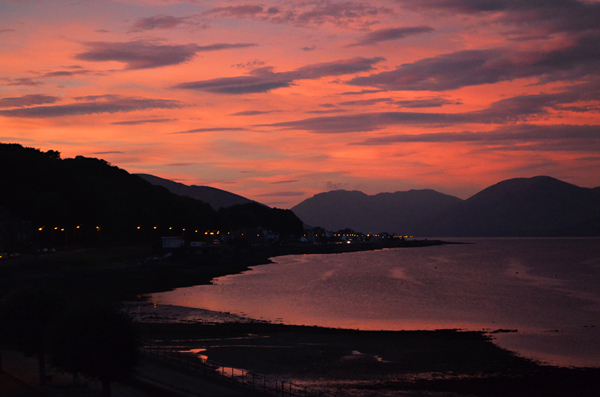 The wedding speeches made us laugh and cry, the music made people dance and jig and whisky and dark ales were downed with gusto. The grand finale of the night was Runrig belting out Loch Lomond whilst everyone crossed hands in one big circle and surged back and forth, almost causing a few accidental Glasgow kisses in the process, as they sang the lyrics with the passion of those whose feel the meaning of the words deep in their souls; words which are especially poignant after a few drams.

For a night everybody was an honorary Scot. No matter what nationality, all present had a taster of aspects of our culture which do stir up feelings of pride. Whether it was kinship, friendship, the inclusive nature of the celebrations or the slightly raucous and gallas swagger of the whole shebang I don’t know. Whatever it was it hung in the room with a huge beaming smile and I felt immensely proud to be part of it.

Just before Christmas 2015 Bute was the first place in the United Kingdom to welcome Syrian refugees.

That was something which really made me proud.

An Alternative Taste of Pitlochry in the Scottish Highlands

Pitlochry is an immaculate little town that must have first time visitors to the Highlands of Scotland drooling like a heilan’ coo when they set eyes on its ridiculously pretty streets. […]